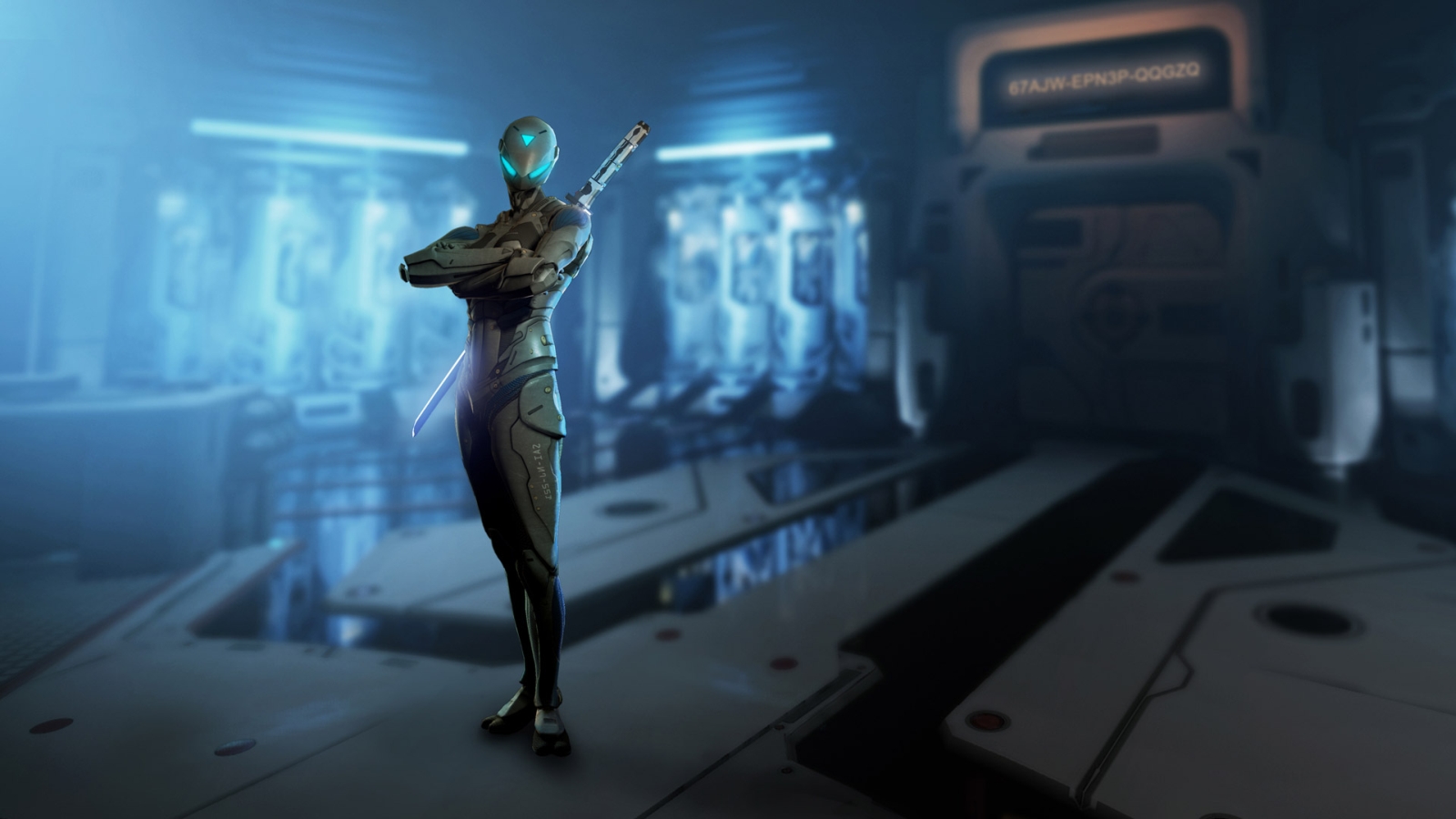 VR wave shooters are a frequent staple of the VR ecospace. With a deviance in quality as deep as it is wide, there are quite a few that hardly qualify as more than glorified technical demos, with few standouts. We got our hands on Raw Data at a few points in its Early Access life and found that it had a lot of potential. Now, as it crosses the line into full release, Mike Dunn and I teamed up to take down some robots in VR space to see if Raw Data can transition from ambitious concept to heart-pounding virtual reality combat.

The story of Raw Data (and unlike most shooters, there is actually a serviceable storyline here) takes place in the year 2271. A massive company called Eden Corp has plugged themselves into just about everything – food, drinks, electronics, medical tech, robotics, and more. A Google-like company, they are generally trusted and thought to be a benevolent necessity. Acting as a double agent for a hacker group called SyndiK8, your job is to break into the dark recesses of Eden Corp and recover the “Raw Data” to find out what’s really going on.

As the storyline plays out, you’ll meet a disembodied voice from SyndiK8 that acts as your “woman in the chair” to help you bust through Eden Corp’s network. She’s shortly joined by a co-opted AI named Simon, jailbroken from Eden Corp itself. Between the both of them, they handle the remote hacking while you handle all the shooting work. It seems like an unfair division of labor, but hey, them’s the breaks.

Megabots? They aren’t your friends.

In practice, the storyline unfolds with the players descending or ascending from the Eden Corp lobby to some sort of action-murder playground. The first few levels are simple — little more than a silo in layout. Pushing further into the campaign or multiplayer unlocks larger levels. The team at Survios break the players in by amping the level complexity, slowly introducing left and right lanes, larger spaces, and eventually massive areas with a great deal of verticality. Similarly, foes start off as Asimov-inspired robots similar to the mediocre Will Smith movie I, Robot, but growing larger and more dangerous, armed with homing rockets, lasers, and more.

Instead of character classes, Raw Data lets you step into the boots of SyndK8’s hackers (though “hacker” is a bit of a misnomer – they have a machine that does the work for them after you plug it in). Each has four unlockable powers, as well as a handful of ultimate abilities that will make the difference between success and failure.

Bishop is a Gun Cleric a la the movie Equilibrium. As you complete levels and earn XP, he’ll earn dual pistols, a proximity reload power that lets you drop in a new magazine by simply dropping your hands to your hips, charged shot which fires through multiple foes, and a fusion charged shot that lets you double up your energy blasts into a single powerful bolt. As you take down foes, you’ll be able to unleash Bulletstorm which launches an automatic barrage of unlimited nano-rounds. Timewarp slows down time, allowing for easier pinpoint shots.

Bishop is a gun cleric, able to dish out serious damage with dual pistols.

Saija is a cyber-ninja who wields a light beam katana called a “Flash Blade”, eventually unlocking a second for dual wielding action. Both of these blades can be thrown, circling through the air and boomeranging back after a short period of time, carving up everything in its path. Focal Strike is similar to a Japanese Kendo attack called Shomen Uchi which has Saija using two hands to strike from overhead to the ground for a massive power attack. Telekinesis makes you feel like a Samurai / Jedi badass as you can lift foes with a free hand, holding enemies in the air while you cut them to ribbons, or launching them into nearby walls for comedic effect. This combines nicely with Saija’s ultimates – Levitation Smash and Shadowslash. Levitation Slash lets you leap high into the air and then strike the ground for a massive area of effect blast. Shadowslash fires light beams after ever strike, unleashing indiscriminate damage all around you.

Elder, as his name suggests, is the oldest of the four heroes. He uses a compound bow that can fire green arrows (in so far that the arrows are green — nothing to do with the patented DC character by the same name). Firing the bow is as simple as grabbing the string and pulling it back to load an arrow, aiming, and releasing. The Charged Arrow is powered by holding your line drawn for an extended period and being patient for them to charge up, as the name suggests. With some XP under your belt you’ll learn Multi-Shot, which splits a single projectile into five – useful for slowing down larger crowds of incoming bots. The Tagging Arrow reminds me of the AKS-74U from the movie The Fifth Element, as you can tag a target, making all subsequent shots home in and hit that same target regardless of where you are aiming. Holo Decoy does exactly what it sounds like, letting Elder set up a holographic decoy that mimics his every move, taking only a small amount of damage before it explodes, hopefully taking a group of bots with it. Elder’s ultimates are Crystal Hazard, which provides an arrow that spreads yellow crystals at the feet of enemies, dealing damage over time and slowing anything that enters into it. Explosive Arrows are precisely what you’d expect.

Elder will give you a shoulder workout with his bow and arrow.

The last hero on the team is Boss, a shotgun-wielding Matrix-inspired street-merc, is your go-to when you want to do a lot of damage at close range. That said, getting some XP under your belt unlocks the Quad Chamber, putting four shells in the chamber instead of one, and a Grenade Launcher, which unleashes three grenades instead of shotgun shells. Like Bishop, Boss can also pick up a Proximity Reload power. Rounding out Boss’s four powers is Iron Fist. Again, unrelated to any DC characters by the same name, Boss is able to charge up his fist and then punch with powered up fists to electrocute and destroy nearby bots. Boss, like the other three heroes, has two ultimates – Air Juggle and Fury Mode. Air Juggle does exactly what the name suggests, tossing enemies into the air for some carnage as bots float up and struggle. Fury Mode powers up your Iron Fist, letting you unleash them in an unlimited fashion for a short period of time.

Each character feels completely unique, and utilizing their powers effectively takes a bit of practice. When used in multiplayer, they compliment one another nicely, granting ranged superiority and melee brutality, in a combination of Saija and Elder, as one example. If you need to ratchet the difficulty up or down, there are also four difficulty levels to play with.  If you’d like to see how all of this comes together, check out Mike Dunn (on the Rift) and I (on the Vive) tackling the Nuke Fusion level in cooperative play.

We did encounter several bugs during our time with Raw Data. Mike encountered an issue where he ran himself out of ammunition and couldn’t pull additional clips until he was killed and it auto-refilled. Beyond that, we saw plenty of goofy floppy robot limbs thanks to some wonky Havok engine stuff, but none of it put a damper on our fun.

If there was one thing that did put a damper on our fun, it’d have to be the repetition of the enemy waves. Most of the nuance is lost in wave after wave of robots, the game favoring volume over variety. It’s not unexpected for a wave shooter, but combined with a story that you’ll either love or ignore, it does create a bit of a glitch in the Matrix.

Graphically, Raw Data is gorgeous, even on the lowest settings. Pushing up to Ultra puts it in direct competition with the best looking games on the platform. Beyond the occasional Havok oddities, the character models look sharp, and regardless of how many foes take the screen, my laptop had no problem keeping up. Given that the video card is a GeForce 980M (equivalent to a desktop GTX 970), that’s an impressive feat.

The team at Survios have done something few others have accomplished in the VR sphere - they’ve put out a whole game. It’s not a concept, it isn’t Early Access, and it’s not a half baked demo - Raw Data is a complete product featuring a single-player campaign, cooperative multiplayer, PVP, multiple classes, and more. While there are still a few bugs to iron out, Raw Data manages to elevate itself above the usual wave shooter fare.

Ron Burke is the Editor in Chief for Gaming Trend. Currently living in Fort Worth, Texas, Ron is an old-school gamer who enjoys CRPGs, action/adventure, platformers, music games, and has recently gotten into tabletop gaming. Ron is also a fourth degree black belt, with a Master's rank in Matsumura Seito Shōrin-ryū, Moo Duk Kwan Tang Soo Do, Universal Tang Soo Do Alliance, and International Tang Soo Do Federation. He also holds ranks in several other styles in his search to be a well-rounded fighter. Ron has been married to Gaming Trend Editor, Laura Burke, for 21 years. They have three dogs - Pazuzu (Irish Terrier), Atë, and Calliope (both Australian Kelpie/Pit Bull mixes).
Related Articles: Raw Data, VR
Share
Tweet
Share
Submit