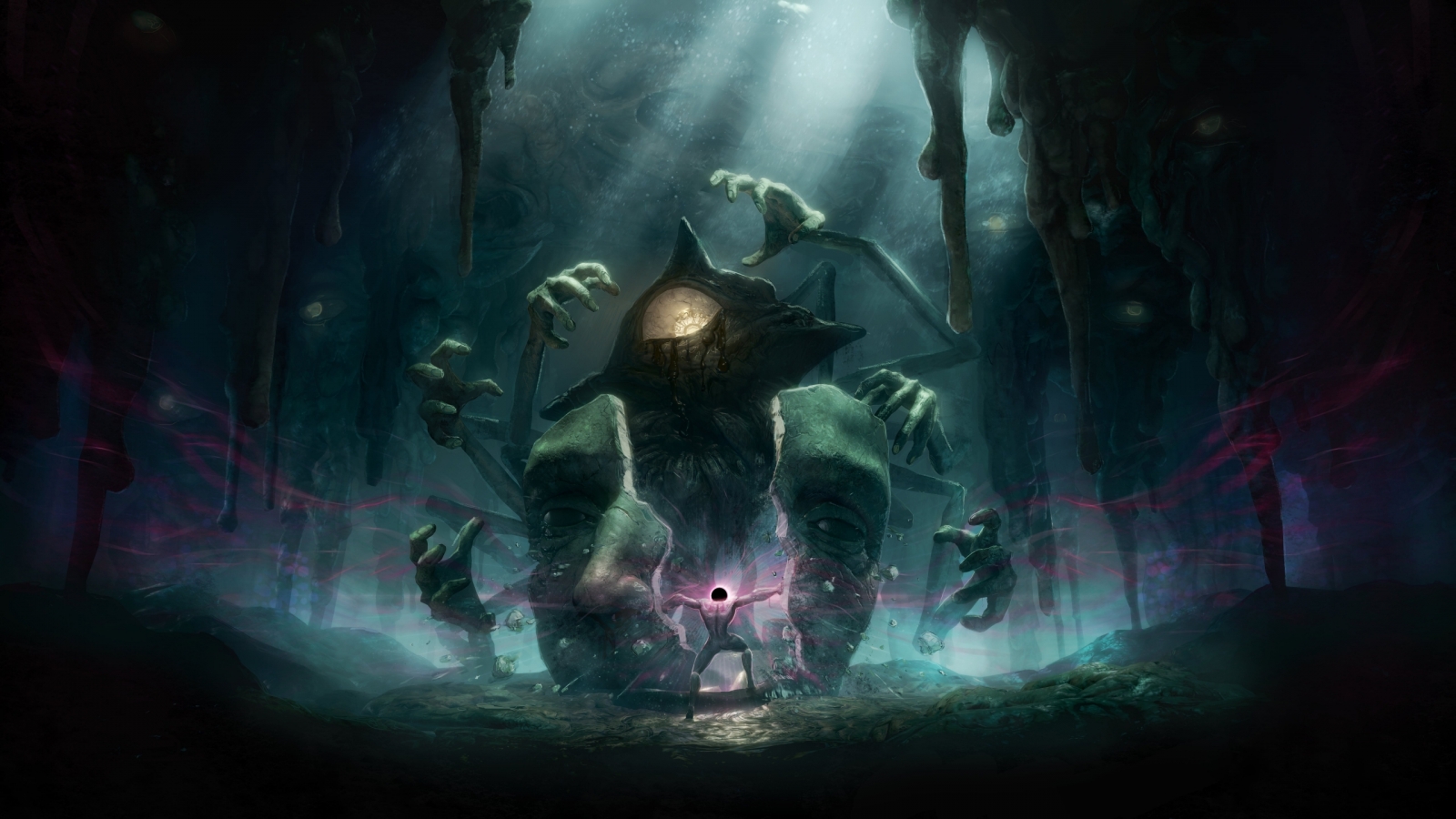 There’s an awful lot to love about Grime. As the first game developed by indie studio Clover Bite, they’ve done an absolutely fantastic job of creating a polished, exciting, and brutally punishing action-adventure game that takes heavy inspiration from other greats such as Hollow Knight, Salt and Sanctuary, and of course- Dark Souls. As a title that’s stayed fairly under the radar until recently (it’s picked up a lot of pre-release interest on Steam), I was genuinely surprised at how much I enjoyed my 15 hour playthrough. While there are certainly elements of the aforementioned titles that Grime heavily borrows from, it does more than enough new, exciting things and perfectly executes so much of what it is trying to accomplish that I have no hesitation in recommending fans of the souls-like genre pick this up. I really do hope this game receives the praise and success it deserves: let’s take a closer look.

In Grime, you play as a character that goes by many different names, Carven and Akhlan just to name a few. Essentially a man with a dark hole for a head, you’re a deity of sorts, feared and revered alike by the strange inhabitants of this surreal world you’ll be exploring. The world is incredibly alien, a mixture of primordial caverns, otherworldly castles, and other environments later on that I don’t want to spoil. The gameworld is intrinsically tied to the story, which is primarily delivered through interactions with NPCs that you’ll meet along your way. Saying the game has a story might be a bit of a stretch though; it’s incredibly ambiguous and fans of Hollow Knight and Dark souls will immediately recognise the style of storytelling that Grime uses. It was certainly one of the weaker aspects of the game for me – when both the world AND the story are so enigmatic, it’s difficult to form any kind of real connection with what’s going on. While I was extremely satisfied with the varied and sometimes surprising environments in the world, I would have preferred a story with a little more guidance or context. 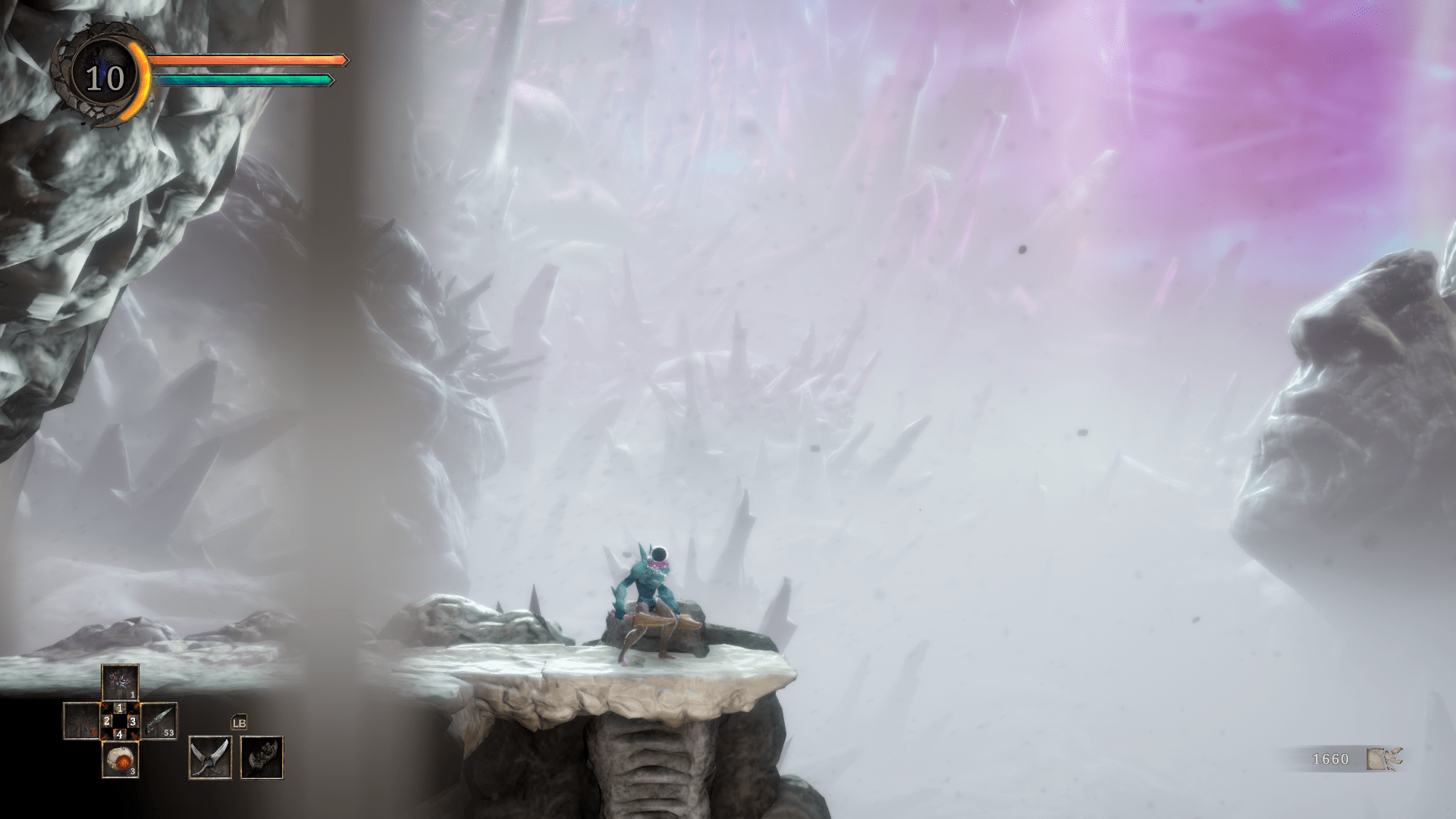 Grime won’t win any awards for graphics, but it isn’t an ugly game by any stretch of the imagination. 2D levels are placed within 3D environments that can both burst with colour or create tense, intriguing backdrops depending on the area of the gameworld. The backgrounds of each level allude to a world much larger than the one we’re restricted to, and breathe a lot of life into each and every area. Much of the Grime’s music is ambient, although it certainly does pick up during boss fights and other key events. I wouldn’t say there are any standout tracks, but it definitely immerses you during exploration and hypes you up during a boss battle. The sounds of the various weapons, skills, and enemy attacks experienced throughout the game are all well done, but the sound did sometimes glitch out for me – especially during boss battles – which could be off putting.

Where Gime truly shines, however, is in its gameplay and progression. The game combines incredibly satisfying combat with platforming. While it starts off easy enough, there is a fairly severe difficulty spike about half-way through the game that continues to ramp up to a ridiculously tough final boss. The later parts of Grime focus heavily on platforming, with some sections reminding me a lot of Celeste in all the best ways. Many of the enemies and bosses found throughout the game are tough, and you’ll need to master parries, dodges and your windows for attack – all while carefully monitoring your stamina bar – if you wish to keep going. While I found some of the enemies frustrating to play against – especially certain types of enemies mixed together – deaths never felt unfair. Controls are tight and responsive, gameplay bugs are nonexistent, and attacks are well telegraphed so deaths are an opportunity for you to learn and improve.

Furthermore, some of the later bosses are some of the best designed bosses I’ve battled against in recent memory, requiring you to truly master their mechanics to take them down. Be aware, however, that some bosses have a post-death phase of sorts, which is occasionally a massive kick in the teeth when you work tirelessly to reduce a bosses’ health bar to zero only to die to a post-death gimmick. I would have preferred these phases to have taken place before the bosses’ HP reached zero. Finally, there’s also a good amount of optional bosses to take down for those who explore each nook and cranny of Grime’s gameworld. The bosses really are one of Grime’s most laudable elements, and Clover Bite should be applauded for creating such intense, enjoyable fights.

The game features a good variety of weapons for you to discover, whether that be more conventional weapons such as a two-handed sword or a pair of daggers, or something a little more crazy like a pair of stone fists. Each weapon has both a standard attack and a special attack, the latter unique to the weapon. I chose a dexterity-heavy build and made use of the stone fists to beat down my foes, but the variety of weapons and skill points to upgrade as you level up will likely make for a decent amount of builds to explore. Most weapons are found through exploring, and there are plenty of areas off the beaten path that reward weapons, consumables, and materials to upgrade your weapons and skills. I loved how I could choose to invest in my favourite weapons, although it can be a pain to upgrade them when you’re far away from the NPC who does it for you. Armour is also present in Grime, but as far as I could tell it was purely cosmetic and didn’t affect gameplay in any way. 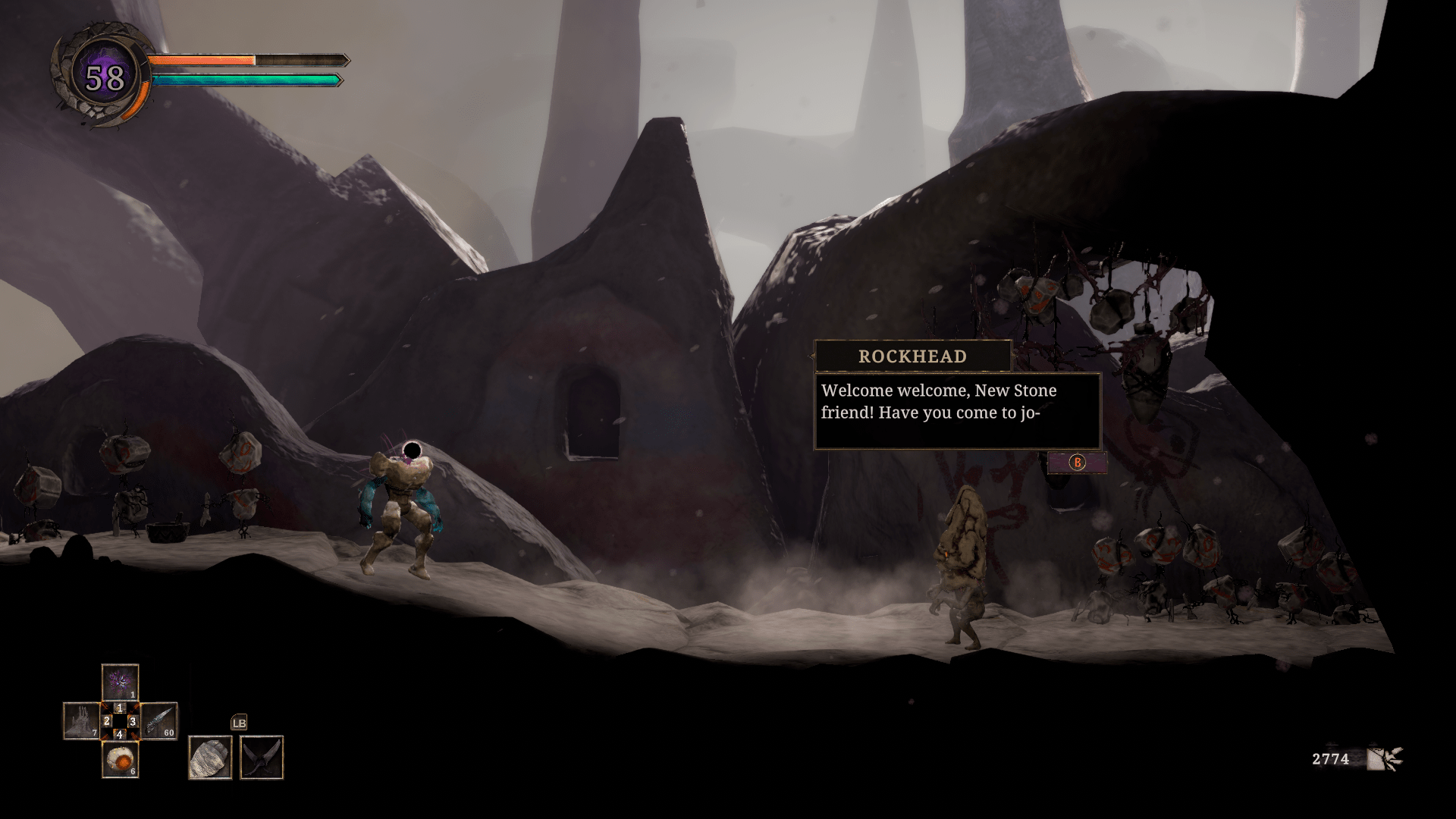 There is a tonne of progression in Grime, and the way it is handled is both satisfying and unique. Each time you defeat an enemy you’ll acquire Mass (XP), which can be used to purchase items and weapons from vendors around the world, or spent at checkpoints to upgrade your stats. Sounds pretty conventional so far, right? Well, Grime also has a perk system that is pretty unique and expertly implemented. The vast majority of enemies in Grime can be ‘absorbed’ rather than defeated.

To absorb an enemy, you’ll need to parry one of their attacks, and for most enemies you will need to take off a good chunk of health before it can be absorbed. When you absorb an enemy, you’ll learn a bit about it. Absorb enough of the same type of enemy and you’ll unlock a unique perk, many of which have an effect on gameplay. Perks include damage reductions if you fail a parry, the ability to leave a ‘ghost’ of yourself behind you for a second or so that will restore stamina, as well as stat increases to base health, stamina, etc. All of these perks can be upgraded between one and five times, and to upgrade them you’ll need to hunt down mini bosses that drop the resource required to make an upgrade. It’s a fantastic way to incentivize overcoming a difficult enemy, and of course, it’s entirely optional. Combine this with new skills and abilities each time you defeat a boss, everything works together to create a game that’s continuously rewarding, which further rewards those who wish to put in the effort of taking down the plethora of mini bosses.

Overall, Grime is one of the most pleasant gaming surprises of the year so far. While it certainly wears its inspirations on its sleeve, it does more than enough to carve out its own space and I’m really looking forward to seeing what these developers do next.

Grime is an expertly crafted 2D action-adventure game that combines satisfying combat, tight platforming, and rewarding progression to earn its place as one of the most enjoyable titles I’ve played this year. It’s also got some brutally tough, memorable bosses that will truly test everything you’ve got. If you’re a fan of a challenge and aren’t too fussed about a story, you’ll have an incredible time with Grime.

Kristian (or Kris for short) is a copywriter by day, button presser by night. Based in the UK, Kris loves any game that allows him to swing a sword, fire an arrow, or sling a ball of fire, but ultimately he's not too fussy. On the rare occasion Kris isn't writing or gaming, you'll probably find him in the bath with a good book.
Related Articles: GRIME, Indies
Share
Tweet
Share
Submit