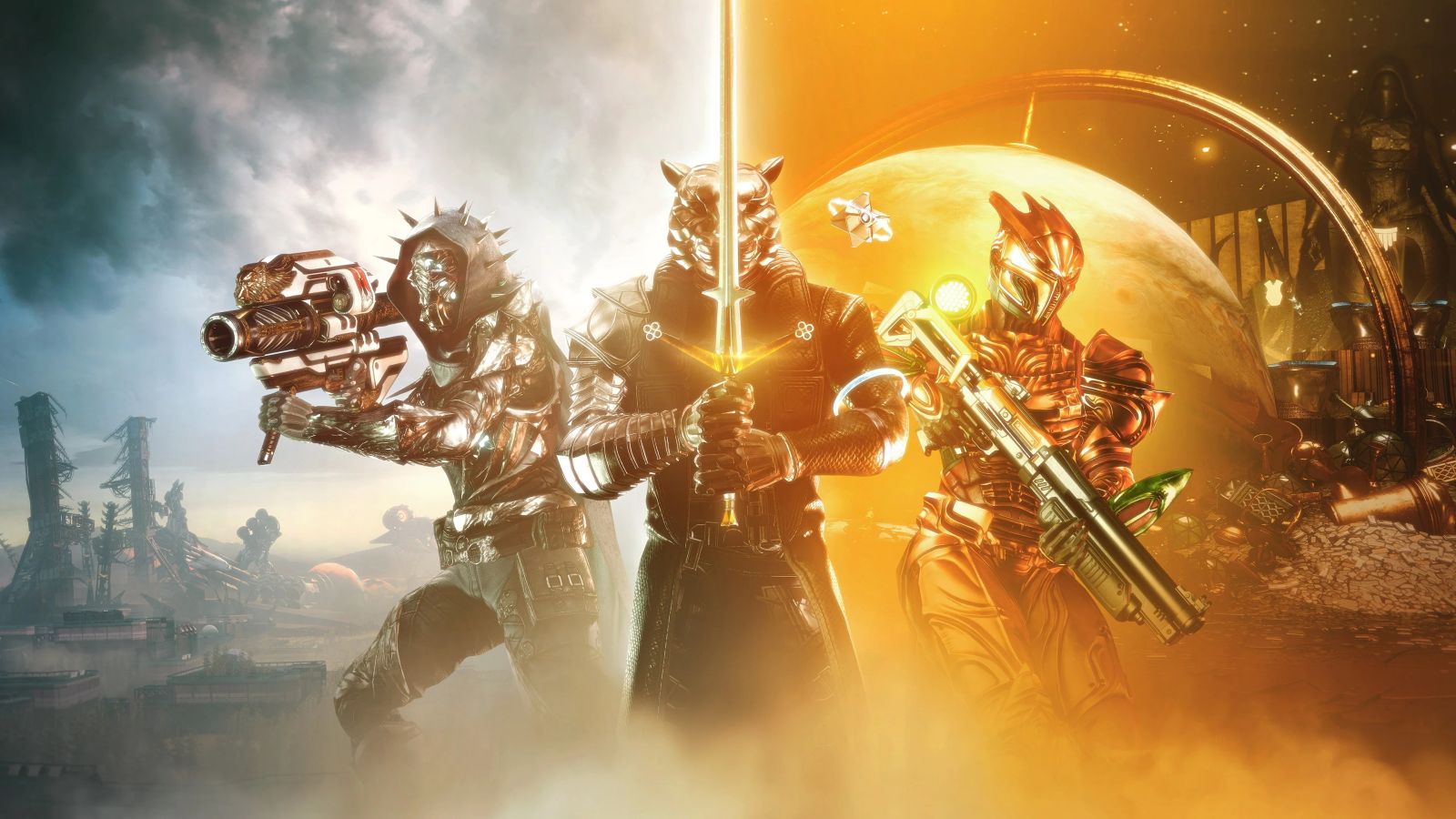 Destiny 2’s latest content drop is a special one. Rather than being tied to a specific narrative beat, or a progression of the story, The Bungie 30th Anniversary Event is about meditating on the players’ journey with Bungie so far. With nods to just about all of Bungie’s created IP (with the possible exception of Oni), this event does come across as a celebration of Bungie’s best and brightest. For consumers looking to get in on the action, however, there may be some initial confusion as to what is free-to-play and what requires the purchase of the 30th Anniversary Pack. Here is a handy graphic straight from Bungie that makes everything crystal clear. 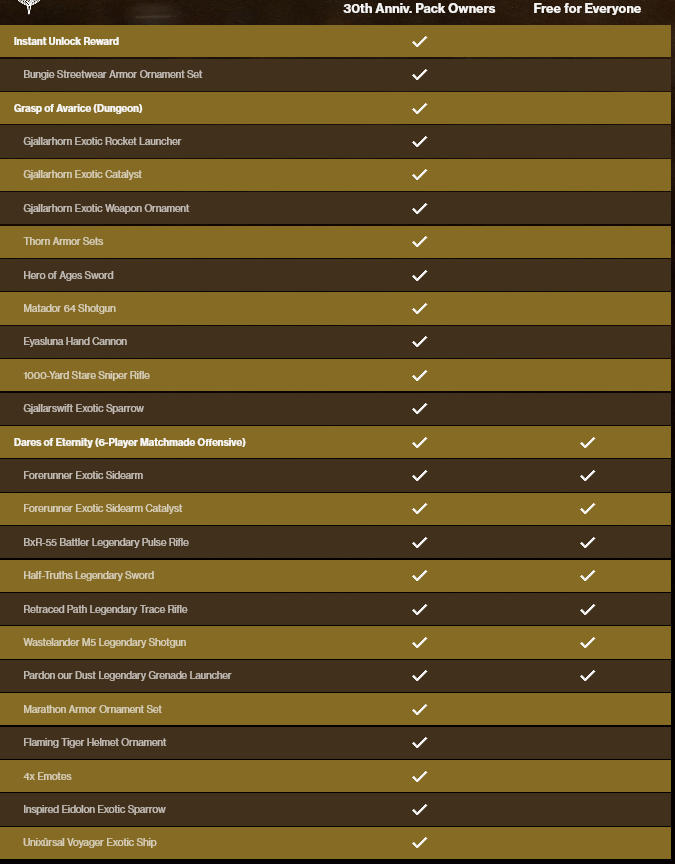 Now that that’s cleared up, let’s get into reviewing the main offerings. On the free side of things, everyone has access to the new six-player activity, Dares of Eternity. Players might hear that name and think, “that sounds like a cheesy game show” and those players would be exactly right. Dares of Eternity plays into that game show theme all throughout its run. Xur, everyone’s favorite emissary of the nine, has somehow gotten mixed up with an otherworldly horse, known only as Starhorse, and now he is acting as our own personal game show host. Needless to say, Xur’s will has never been his own, and now his life goal seems to be helping Starhorse in its quest to get the player some loot. Xur taking the spotlight seems weird at first. He has always been the shady figure akin to the merchant in Resident Evil 4, but this event gives players a little more insight into him as a character and some of it is pretty moving, especially when it comes to the way Bungie writes him during the questline. For the most part, though, he is just an unexpectedly funny “announcer” during the new activity. After each encounter, you are rewarded with neighing from Starhorse and slot machine sound effects that only further the wacky game show feeling. 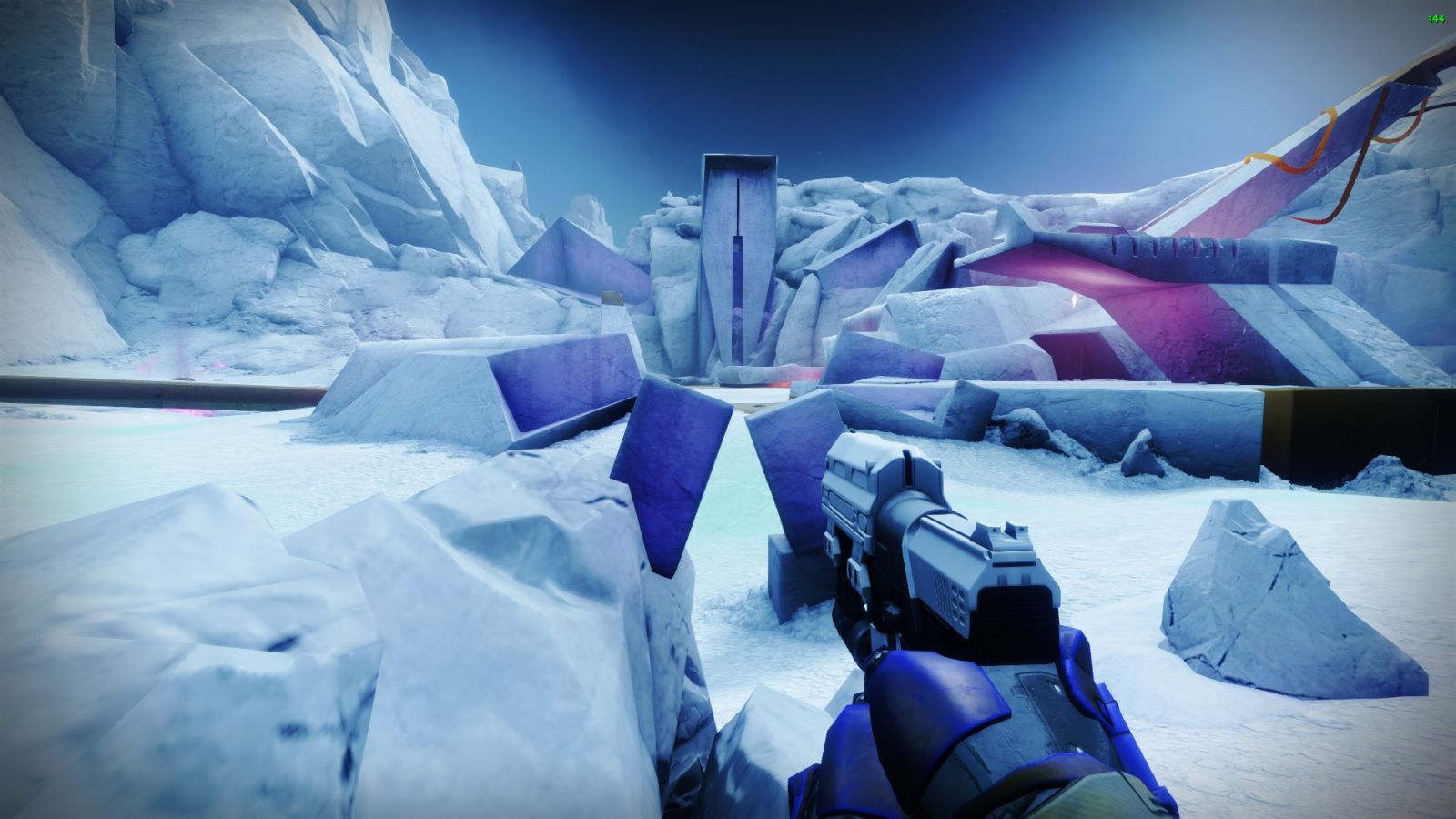 Dares of Eternity takes place in the Realm of the Nine, with its white towering architecture accented by deep pink and purple lighting. The aesthetic of the Nine has always been top-notch, and the visual design does not disappoint here. Each new area in the activity is kicked off with a spin of a wheel to determine the next enemy race you will fight, and Xur always has some witty remark or callback to offer about the final outcome. If it’s Cabal, watch out for a fun reminder of the most iconic line in Destiny history, and if it’s Hive, he might remind you to bring a Sword. It is all really funny and well done, in a way that won’t get old any time soon. Each fight is excellently crafted, offering more engagement and objectives to the players than most six-man matchmade activities that Bungie throws the players’ way. Players will either be capturing points, collecting buffs to destroy crystals, throwing orbs at blights, and much more, and the mode is sure to stay fresh thanks to the randomness that the wheel creates.

Additionally, while Guardians take on these encounters, Bungie has curated the best music from Destiny to accompany each fight. Themes associated with each enemy race dominate the score and create an amazing sense of nostalgia that heightens an already great activity. Even without the nostalgia, though, the music from the original Destiny has always been exceptional, and it is used here to great effect. The final bosses of Dares of Eternity are all taken from the repertoire of enemies the Guardians have dispatched in the past. This includes Zydron, Crota, and Valus Ta’aurc, and every fight incorporates the most memorable aspects of their past renditions. Overall, Dares of Eternity is a fantastic new six-man activity, free for all players to take part in. It rivals the fun of Menagerie, arguably Bungie’s best six-man activity, and it does so by creating its own atmosphere and mood that feels like a celebration of the power fantasy Bungie has created with Destiny. 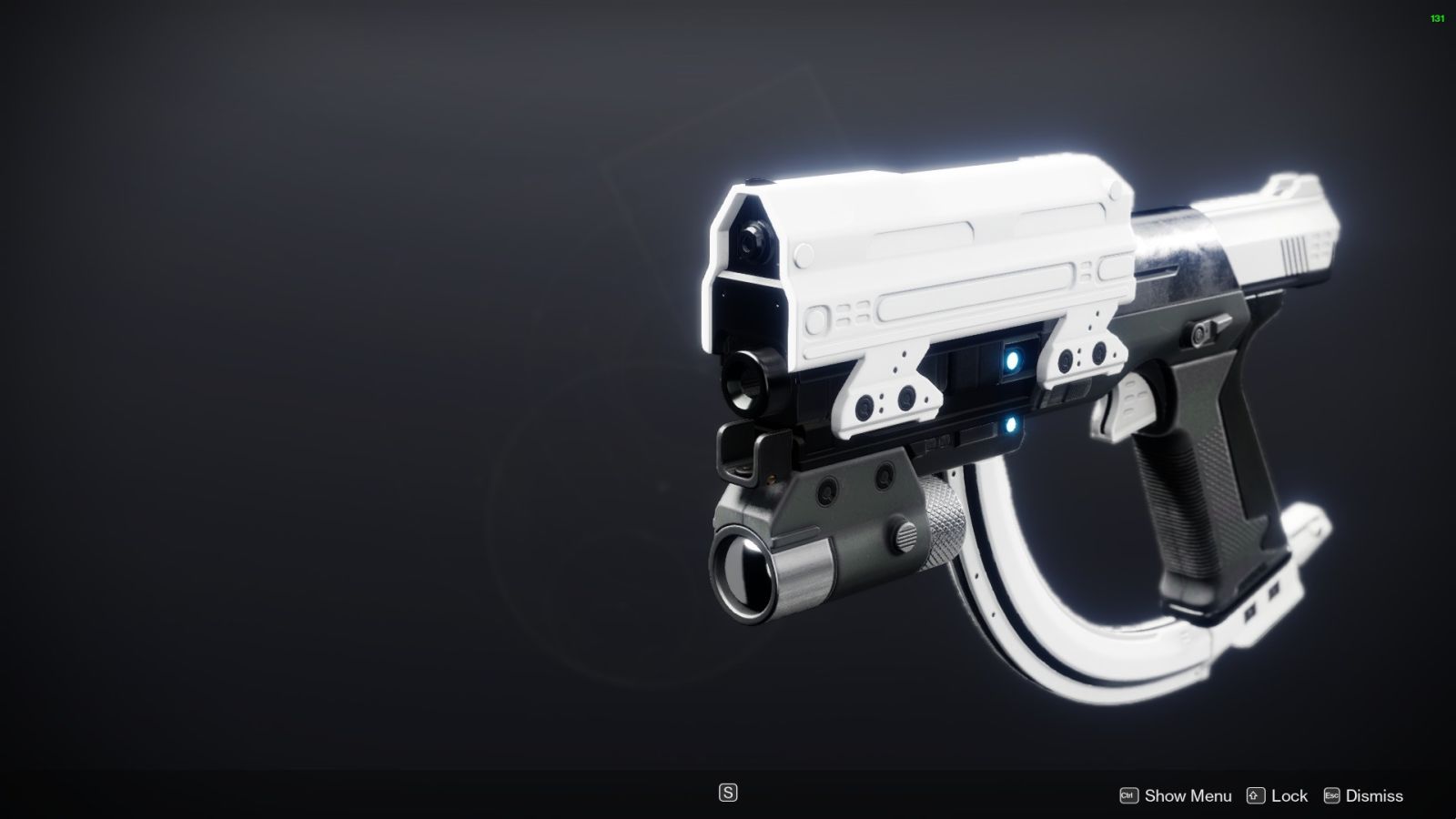 Destiny, however, would be nothing without its rewards, and Dares of Eternity does not disappoint. After completing the first run of Dares, players are met with the rewards they can start chasing. In what would be the craziest move of brand synergy (if Fortnite did not pull things like this off every day), the Halo Battle Rifle, the Combat Evolved Magnum, the Halo Beam Rifle  and the Halo Energy Sword are now present in Destiny 2. All of them are available under different names, of course, but they are translations of Halo weapons into Destiny’s sandbox. The battle rifle and magnum stand out the most as they really feel exactly like Halo weapons. In fact, I would say that the Destiny 2 battle rifle feels better than that of Halo Infinite. Guns in Destiny 2 and their effects on enemies are just too good to be compared to most other shooters, and seeing a Cabal head pop off as I hip-fire BR bursts into it just gives me a much better sense of kinetic feedback than doing the same to any enemy in Halo ever has. The magnum, known in Destiny 2 as the Forerunner, is extremely unique. It is a sidearm, it uses special ammo, it is in the kinetic slot, and it is an Exotic that deals significantly more precision damage when the enemy is unshielded. It is in Destiny 2 in all its glory, down to the insanely oversized reticle and the crisp feeling zoom. No matter how viable it is in the endgame, I can see myself using the BR and Forerunner combo in the months to come pretty much all the time. Everything I have discussed so far is completely free, with the addition of a breech-loaded grenade launcher called Pardon Our Dust, and it is all completely worth trying out, even if you aren’t necessarily a fan of Destiny. Now, though, let’s move on to the 30th Anniversary Pack. 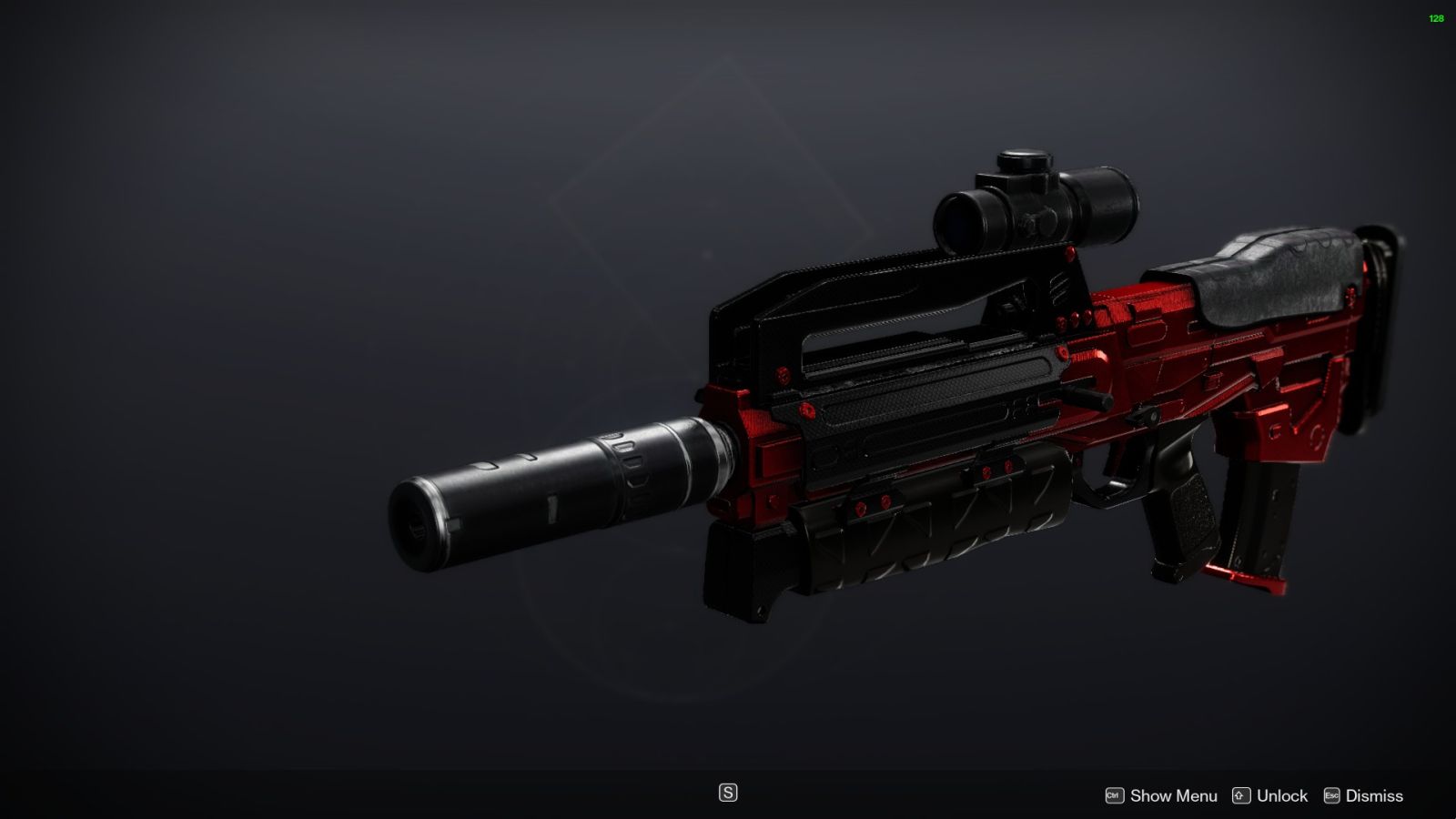 On top of the new weapons, comes a host of new perks that will most likely roll on future weapons to come. Some of these perks are really unique, offering new ways to play and change up builds. One such perk, Perpetual Motion, buffs reload speed and other stats while in motion. Another, Eager Edge, increases the lunge distance and speed of swords immediately after switching to them. There are a few other added perks here that I won’t spoil, but every one of them adds something interesting to the gameplay.

The pack includes a lot of cosmetics, which may or may not be worth it to consumers, but the main offering is the new Dungeon, its rewards, and the Gjallarhorn Exotic Rocket Launcher. The Dungeon, Grasp of Avarice, takes place in the Destiny loot cave from the original game. It is a really special thing when players are able to influence the design of a huge game like Destiny, and that is exactly what they have done here. The loot cave was such a moment for not just Destiny players, but the video game world in general, and now Bungie has honored its legacy by creating an incredible tribute to the “greed” of Guardians. The story, told through collectible audio logs, explores just how far some Guardians went on their quest for engrams, and it gets surprisingly dark.

A friend and I two-manned the Dungeon and went in without looking into any guides or videos. I fully recommend buying the pack to people who want to grind new Destiny content and need something to hold them over until The Witch Queen. The dungeon itself is extremely well-designed, with a ton of secrets and beautiful spaces to play in. It honestly surprised me how much they included in the Dungeon, and there was one encounter, in particular, that is reminiscent of the sparrow race in Scourge of the Past. That said, nothing in the dungeon is incredibly innovative. There is nothing that feels like a pushing of the envelope for what Bungie can do, but it is all perfectly designed and polished, and a lot of fun to go through. The rewards for completing the Dungeon include weapons such as the Eyasluna and the 1000 Yard Stare, as well as a set of armor based on the aesthetic of the Thorn hand cannon. Completing the Dungeon is also the key part of progressing the quest for the Gjallarhorn. Grasp of Avarice is fun, and I will definitely be grinding it many times a week to farm god-rolled weapons and armor, as I am sure many other Guardians will as well.

The Gjallarhorn is back, and although I never used it in Destiny, I am loving every bit of it in Destiny 2. It is intricately designed, with gold details and a regal feel to it, and every shot of it feels like bliss. Not only that, it buffs non-Exotic rocket launchers held by your teammates, essentially making them mini-Gjallarhorns, and affording them another Exotic slot. It feels amazing to use, but it also does not feel like a must-use. This is generally the direction Bungie is going in with weapon balance in general, and that’s a good thing for the game. Not having must-use weapons creates build diversity and allows for more player expression, which is really the driving reason to play once you hit the endgame. Still, once players unlock the Gjallarhorn catalyst, they may not want to put the gun down as it makes it one of the few rocket launchers capable of holding 2 rockets in a mag and buffs the already strong Wolfpack Rounds.

For many, the $24.99 asking price for Gjallarhorn, a Dungeon with some nice rewards, and some cosmetics might not be worth it, but I think Bungie has created one of their best content drops yet with this release.

Bungie’s 30th Anniversary Celebration feels like Christmas Day for Bungie fans. Every second spent playing the new activities and using the battle rifle and magnum feels like a dream that doesn’t have to end. A lot of the offerings here are free, but the Dungeon and the Gjallarhorn are totally worth the asking price even without the extra cosmetic goodies. This drop is not only a celebration of Bungie’s past, but a glimpse into Destiny 2’s bright future, and I am all in.

Noah Anzaldua is a game journalist, Twitch streamer, and a passionate fan of Apex Legends and Destiny 2. Writing and streaming are his passions, and he is carving a career path out for himself. He is a graduate of the University of Alabama where he is majored in News Media, History, and Political Science.
Related Articles: Destiny 2: Bungie 30th Anniversary Pack
Share
Tweet
Share
Submit