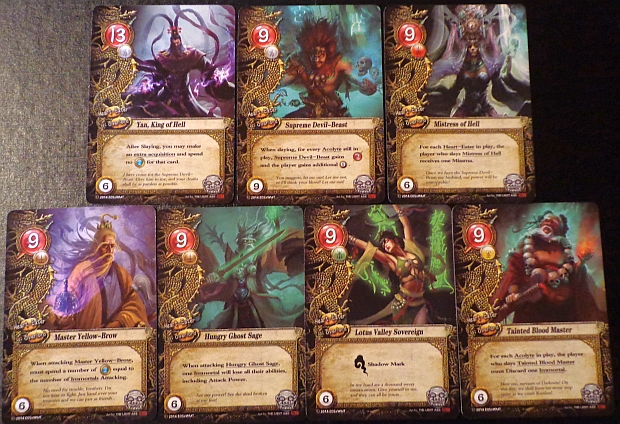 There are two ways to succeed with new offerings in the saturated deck-building market. Interesting stacking effects are the core of any deck-builder, but just as important are the palette of choices players are offered when deciding how to use the cards in hand. Mage Knight is a good example of a newer game that does both of those things well. The other appeal is theme. DC Comics created a popular deck-builder that offers solid play elements while heavily leveraging its wealth of colorful and compelling characters.

Demonslayer: The Siege of Mt. Kunlun was apparently a success in China, where it was first introduced. For me, the draw was the theme. I love history and mythology, and this game seemed like a nice introduction into Chinese creation mythos. I did some research online but the only elements from the game that I can corroborate are Mount Kunlun and its cast of immortals. I understand that Chinese have many origin myths, and some are more widely embraced than others, but I expected to find key aspects of the game’s story online. It’s fine if this is meant to be a new presentation of mythos – I admire the creativity – but potential buyers should know what they’re getting here. If you’re looking for Chinese mythology, this may not qualify, though I am no expert.

Nevertheless, the thematic element is vividly rendered. The artwork conveys the purpose of each card, whether it be Equipment, Artifact, or Immortal. When the game art is as wonderfully composed as with Demonslayer, I wish the designers would come up with a way to express the powers of each card without covering half the card with text pane. Much of the artwork in this game is simply stunning; crowding it on the card feels like an injustice to the artist. I’d like to see more games take the approach of Abyss, which above all else leverages artwork to convey theme and mood, and uses icons to indicate cost and other requirements. Demonslayer does some of that along the left hand border, indicating card cost and other values, but the heavy lifting for ability descriptions is done in plain text. That’s really a criticism of card games in general.

Conventional deck-building gameplay mechanics are employed. The beginning deck consists of five Meditation cards, each worth one Clarity, the game’s currency, and two Disciples, the lowest-level Immortal. As with almost all deck-building games, Meditation cards worth two or three currency can be purchased to improve players’ economies, which are used to purchase Spells, Artifacts, and Immortals. The four different player sects are comprised of Immortals, and each sect has subtly different powers which have a modest impact on strategy. Spells and Artifacts add Attack, Clarity, or manipulate cards in hand. Players pull a new draw hand from the Ready deck and discard to the Waiting deck, and standard recycling rules apply.

I consider this a second-generation deck-building game. Instead of purchasing victory points outright, players compete to build economies that support the creation of armies powerful enough to defeat the Supreme Devil-Beast, his Overlords and Acolytes, referred to as Heart-Eaters. A clever twist to the combat mechanic is that players cannot assault Overlords directly. The game is played in seven waves, with each wave consisting of an Overlord and eight Acolytes. Overlords are powerful in their own right, but the toughness of the Overlord includes the aggregate toughness of all remaining Acolytes in play. In the early waves, players will be challenged to defeat one or two Acolytes in a turn, but as the game progresses and attack values stack it’s possible that an entire wave can be defeated during a single game round.

As with all deck-building games, the draw hand is equal parts luck and effective strategy. Some cards have obvious benefits in the early game but are better culled by mid-game to avoid wasted turns. Demonslayer is solid but not particularly innovative in the way card effects stack. The inclusion of Artifacts represents the first expansion, and help to diversify turn options. Another interesting mechanic is that a player can attempt to acquire an Artifact even if the full cost cannot be paid. Whatever Clarity is in hand is committed and then the player rolls the six-sided die. If the number rolled is equal to or greater than the difference, the player gets the Artifact, otherwise the Clarity is wasted. This becomes moot by mid game when player economies are more than sufficient to buy Artifacts outright.

Strategy for Demonslayer is straightforward. The sheer duration of the game requires players to focus on building an economy quickly, snatching up all the best Clarity cards, and then switch gears to build armies. There is no in-game penalty for not defeating a wave in some limited amount of time; the evil forces of the Supreme Devil-Beast are willing to wait patiently to be defeated. That’s a big miss, in my opinion, as it strips the game of any urgency and forces players to follow the same basic strategy. The game would be much more interesting if it was more cooperative, with an Arkham-like mechanic where each round an Acolyte is not defeated a new one is added to the board, and when some critical mass is reached the game is over and the player with the most trophies wins.

Another problem is that every Overlord and Acolyte are played and defeated every game, so there’s not too much in the way of replayability once player’s get the basic strategy down. I recommend a house rule limiting the game to four or five waves. This increases variability while allowing for a change to gameplay overall, giving equal footing to an Attack-focused strategy.

Demonslayer: The Siege of Mt. Kunlun is attractive and well executed, but suffers from a lack of variability. I believe another expansion or two would improve the experience. The core game will appeal to newcomers to the deck-building format, if any such people exist.

Demonslayer: The Siege of Mt Kunlun, by the Chamber of Ethereal Culture & EOS-SAMA

Demonslayer: The Siege of Mt Kunlun

Demonslayer: The Siege of Mt Kunlun is a second-generation deck building game that is well executed and a solid-looking product, but suffers from limited strategic progression and not much in the way of replayability. Artwork and card titles are tailored to adult consumers.

Mike is a journeyman musician, writer and amateur astronomer who makes a living as a data engineer in Port Angeles, WA. Mike is also a hopelessly obsessed but very marginal player of Magic: the Gathering.
Related Articles: Demonslayer: The Siege of Mt Kunlun, Tabletop
Share
Tweet
Share
Submit