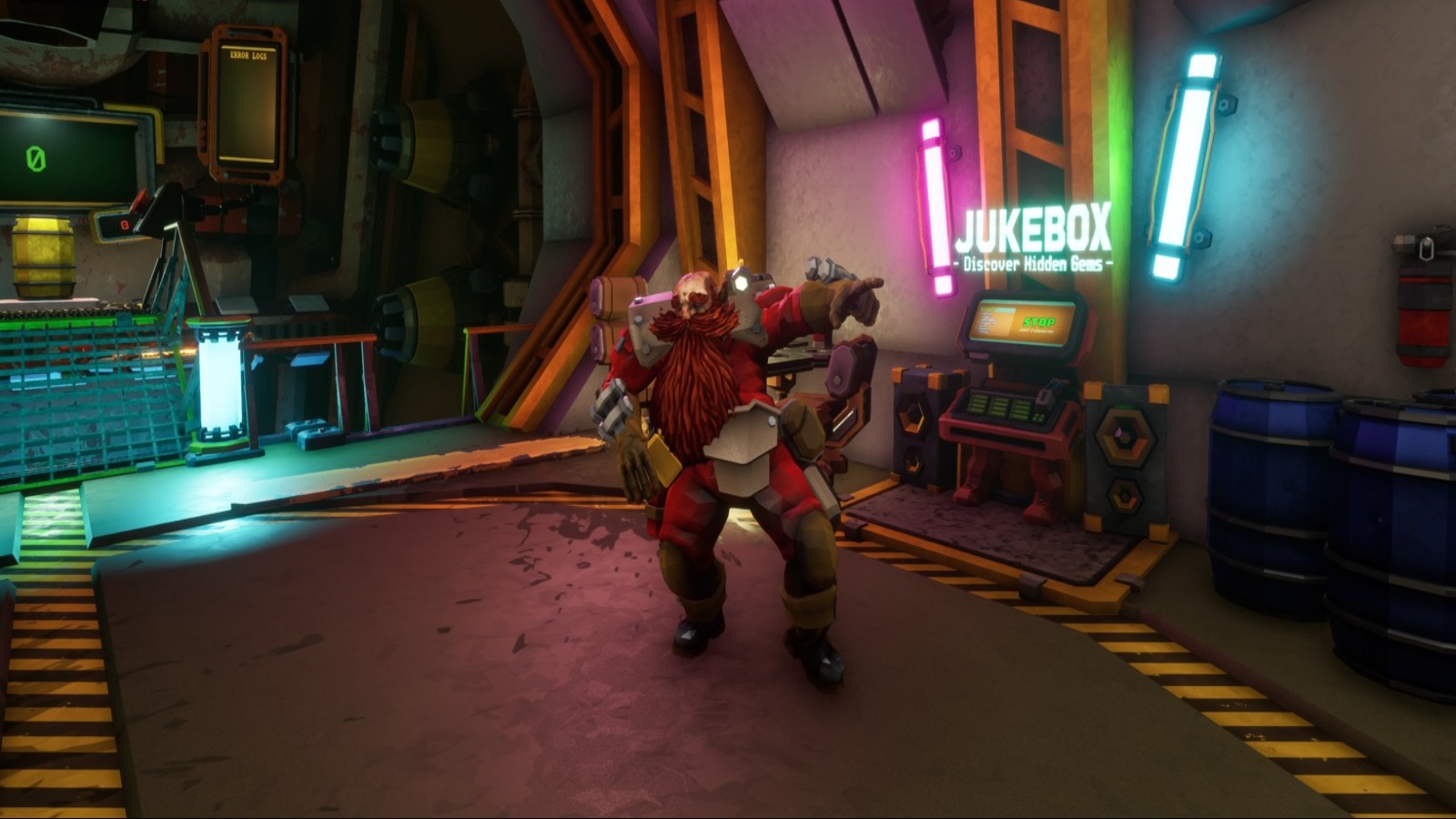 During one of my missions in Deep Rock Galactic, me and a friend were mining a tunnel through the wall of a cavern, desperately trying to reach the extraction point. He was mining away out front, while I was fighting off hordes of arachnids who were closing in through the narrow tunnel he had carved out for us, their sole purpose to tear us limb from limb. We made it through in the nick of time, sighing a breath of relief as we departed the hell hole below. This moment was completely organic, and there were countless moments just as exciting as this during my many hours with the game.

In Deep Rock Galactic, you play as one of four dwarves who are tasked with risking life and limb to scavenge precious resources in the deep dark places of Hoxxes IV, a horrifically hostile alien planet. Your employer, an interplanetary mega corporation also coincidentally called Deep Rock Galactic, makes no secret of the fact that getting you out alive is of secondary importance to the resources you collect. Mission Control will constantly remind you of this during every mission, bringing plenty of genuinely funny gallows humour to the table. Indeed, with a premise such as this, Deep Rock Galactic could have gone down the dark and gritty route, but there is a lighthearted approach to the tone and the game never takes itself too seriously. And it’s all the better for it.

After a brief tutorial, you’ll be loaded straight into an orbital headquarters that acts as your base of operations between missions. From here, you can pick which class you want to take into your next mission, invest perk points into your classes, upgrade weapons and equipment, and purchase new hairstyles and beards for your dwarves. It’s also a social hub, where you and your party can dance to the jukebox, down a few beers, or sling a few barrels in Barrel Hoop. From the instant I loaded into this area, I could tell I was going to be in for a treat. There’s just so much attention to detail, whether it’s the player’s game tag above their sleeping quarters, or the quirky robotic octopus with a top hat that serves you questionably named drinks behind the bar. Each and every pixel of this space bursts with character, and it’s just a great area to spend time in.

From the large console in the middle of the space station you will be able to select a mission. Each mission will generally consist of two elements: exploration and combat. The exploration is mostly tied to finding the resources required to complete your objective, as well as in finding raw materials to upgrade your gear. Every piece of terrain in Deep Rock Galactic can be mined, and you’ll be making your own makeshift tunnels to seek out your objectives. 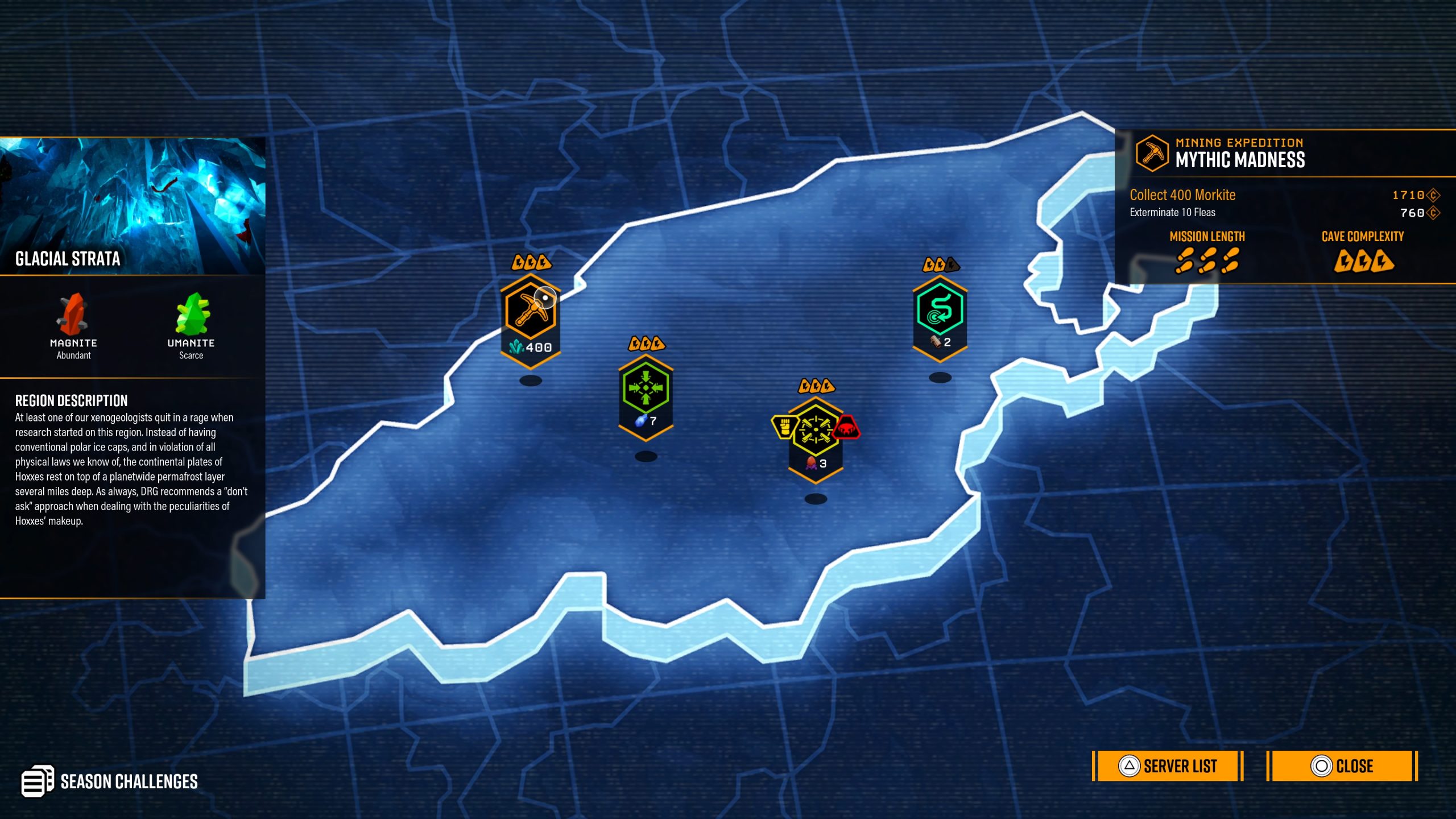 Naturally, the creepy crawly denizens of the planet will do all they can to stop you, and you’ll have to blast your way through them in order to retrieve your prize. They’ll spawn either randomly as the mission progresses, or at designated moments of a mission. While they will mostly spawn in at a pretty slow rate (although quick enough to keep you on your toes), you’ll occasionally be informed by Mission Control that a swarm is on the way, and in those instances, you better prepare yourself for a fight.

There are several mission types: in Mining Expedition you’re required to mine a designated amount of a particular resource; in Egg Hunt you will have to invade alien nests to retrieve their eggs; and in Salvage Operation you will need to find and repair kit that has been lost on previously failed operations. Each mission also has an optional secondary objective, usually to find items scattered around the map, and you’ll receive a bonus should you choose to complete these. There’s a bunch of other mission types too, each with their own unique objective and feel. My personal favourite is On-Site Refining, which involves hunting down Liquid Morkite vents and building pipes to connect them to a refinery site in the centre of the map. You’ll then have to fight off waves of enemies while the Morkite is refined, repairing pipes as you go. The great thing about this mission is that pipes can be ridden on like rollercoasters, resulting in fast paced toing and froing as you keep that sweet sweet liquid flowing.

Most missions end in a delightfully tense fashion. After completing your objectives, you and your team will have a limited time to return to the starting point to extract. In many instances, you’ll be quite far away from where you started out, so working against the clock to get back in time, while, of course, fighting off waves of enemies who are doing all they can to prevent dinner from escaping, feels incredible. During my time with the game, I had many organic set-piece moments as me and my friends tried to make our way through the subterranean labyrinth we had made while looking for treasure.

While there isn’t a bucket load of mission variety, things are kept fresh with a good number of beautiful biomes and some of the best procedural generation I’ve ever seen in a video game. There are 10 or so different biomes in the game, with each one looking wildly different to the last and many of them featuring unique environmental hazards. Hollow Bough, for example, is a devilishly oppressive place where the roots dangling from the cavern walls will do their best to turn you into a kebab. On the other hand, Azure Weald is an otherworldly place of beauty that bursts with blue and purple light omitted from vibrant alien fauna. When you consider that the entire game takes place underground, the diversity that Deep Rock Galactic offers in its locations truly is a great achievement. 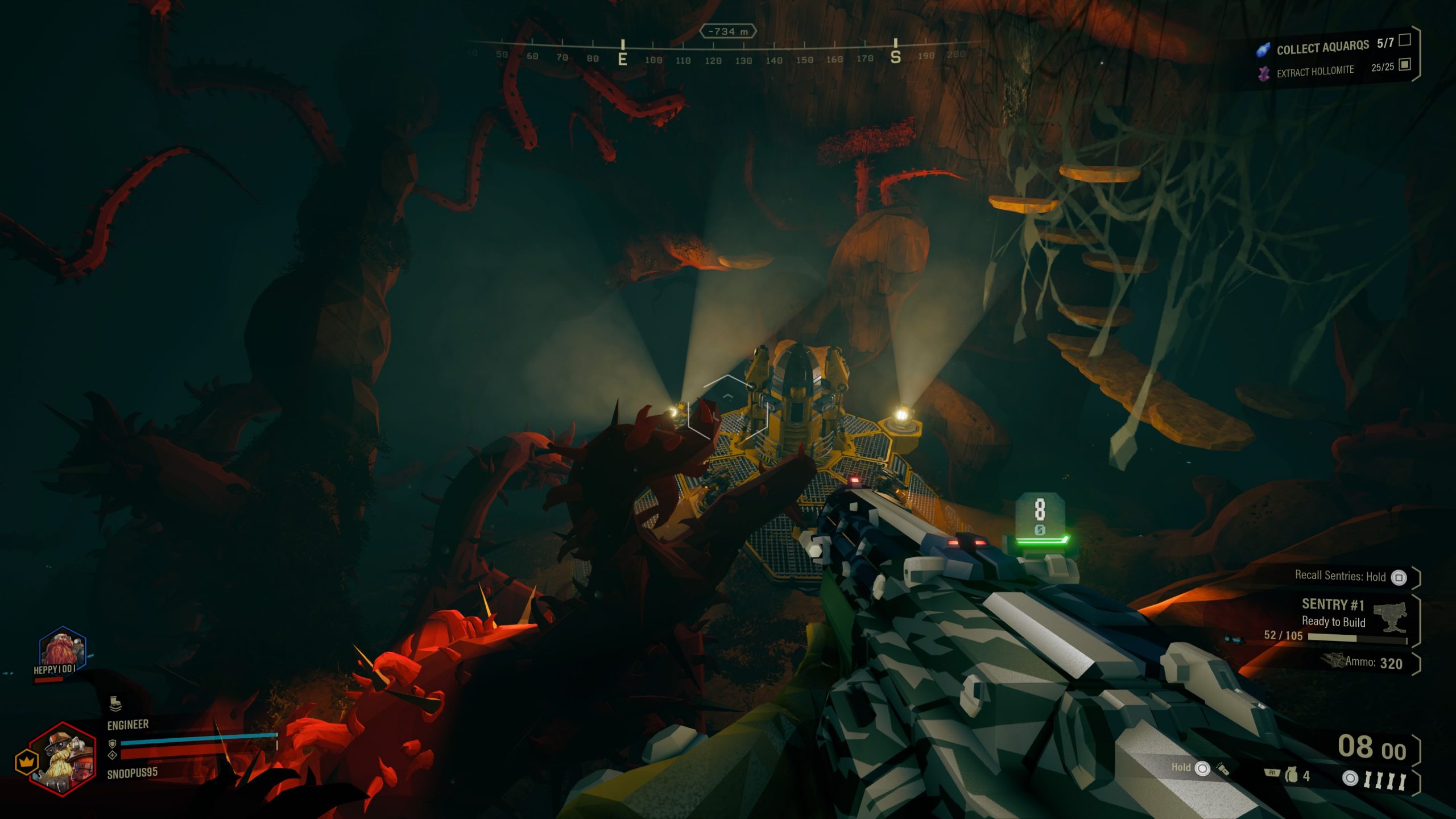 I just want to reaffirm how fantastic the procedural generation in Deep Rock Galactic is. At times I genuinely could not believe that certain map layouts were not handcrafted. Most map layouts feature a handful of caverns connected by tunnels, with the number increasing on higher complexity missions. Some of the caverns are incredibly vast, to the point where you cannot see the ceiling. Yet, the way the game puts together bits of rock, crystal, vegetation and other subterranean materials genuinely gives some areas a manufactured feel. As a result, my jaw was still dropping from some of my discoveries even after many, many hours of play.

Hoxxes IV is a hostile place, but thankfully you have plenty of tools at your disposal to increase your chances of survival during each mission. There are four classes to choose from in Deep Rock Galactic: The Gunner, The Driller, The Scout, and The Engineer. You can change your class freely between each mission, although each one is levelled up and upgraded independently. Each class has a unique pool of weapons to unlock and upgrade, as well as a signature utility ability to make exploring that much easier. The Gunner, as you might expect, specialises in heavy weaponry while also having access to a zipline that he and his allies can use to maneuver up and down hard to reach places in a pinch. The Engineer, who I invested the majority of my time in, has a roster of close range primary weapons and explosive secondary weapons, as well as a portable machine-gun turret. Engineers also wield a platform gun that can be used to – you guessed it – attach platforms to any surface. 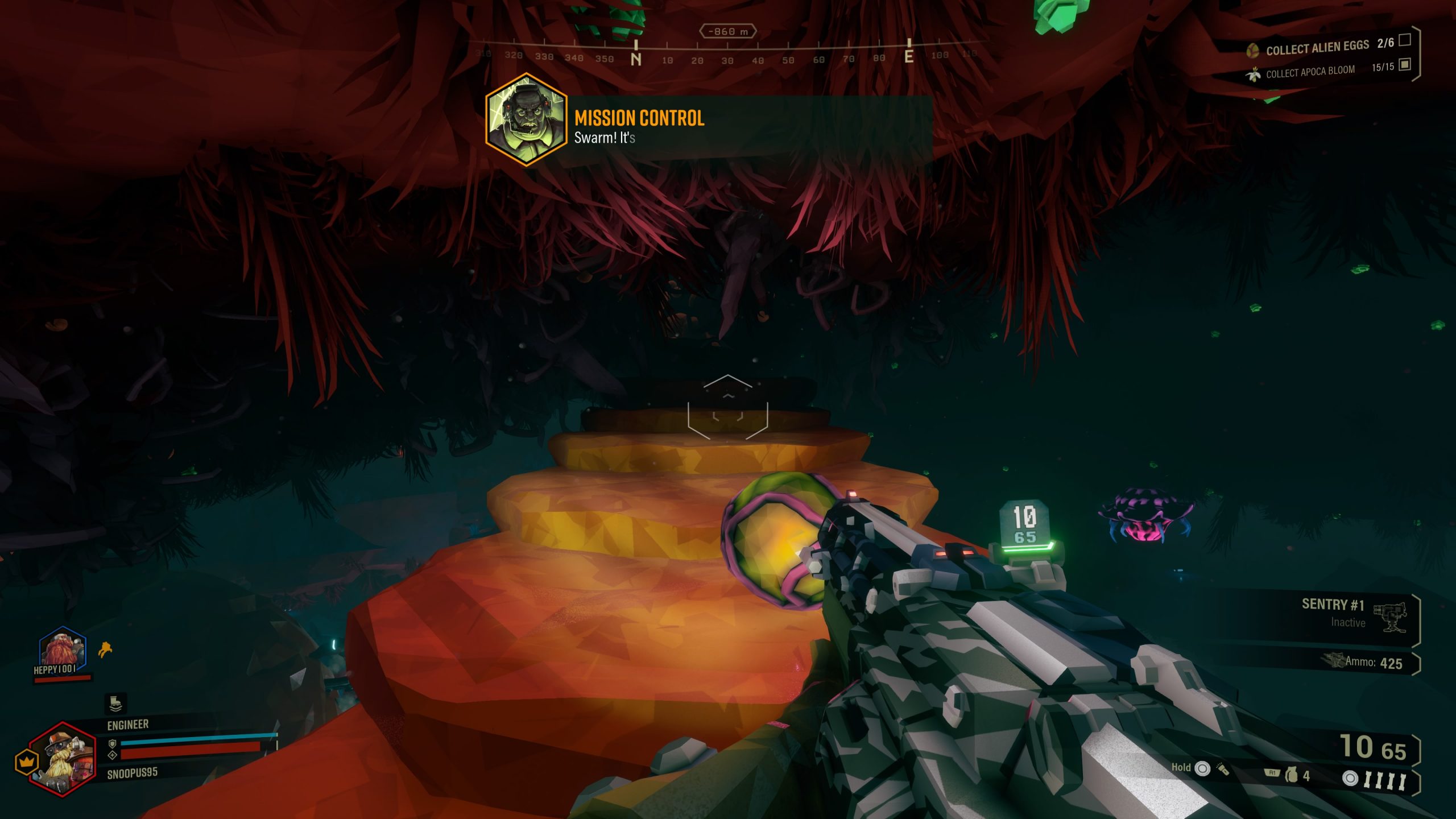 Although you can play solo (with a handy droid assisting you should you choose to play this way), Deep Rock Galactic is ultimately designed with co-op in mind. This is evident by the way class abilities can be used to supplement or enhance your team’s problem solving. See a node on the side of the wall? Have an Engineer place a platform so a Scout can grapple up to get it. Has your teammate fallen down a ditch? Construct a way out for them using the Gunner’s zipline. Deep Rock Galactic gives you countless tools that encourage allies to work together, massively enriching the co-op experience. The game is best to play with friends, but if there isn’t anyone on your friend’s list, don’t worry. You can always team up with strangers in the lobby who I have always found to be friendly and helpful, even if there can be a few network issues at times.

After finishing a mission, you’re immediately loaded back into your headquarters for some well deserved R&R. From here you’re able to spend credits and bonus materials accumulated in the mission on upgrading weapons and equipment for your classes. There’s quite a lot here, from perks to specific weapon upgrades that unlock as you level up your character. The upgrades themselves are a bit of a mixed bag, with typical upgrades such as extra ammo, bigger explosion, or greater magazine sizes being commonplace. There are a few interesting ones though, such as the ability to have the platforms built by Engineers reduce fall damage. This particular upgrade had a large impact on gameplay, as you could create platforms on surfaces below you and jump down without taking otherwise fatal fall damage. I do wish there were more upgrades like this, however I understand that there are some end-game upgrades for weapons that have a more significant impact on the way you play the game. You can also spend your credits on cosmetic upgrades, such as hairstyles, beards, armour, and accessories. There’s plenty of variety on offer here, and it’s nice that the developers included so much without it being locked behind a paywall. 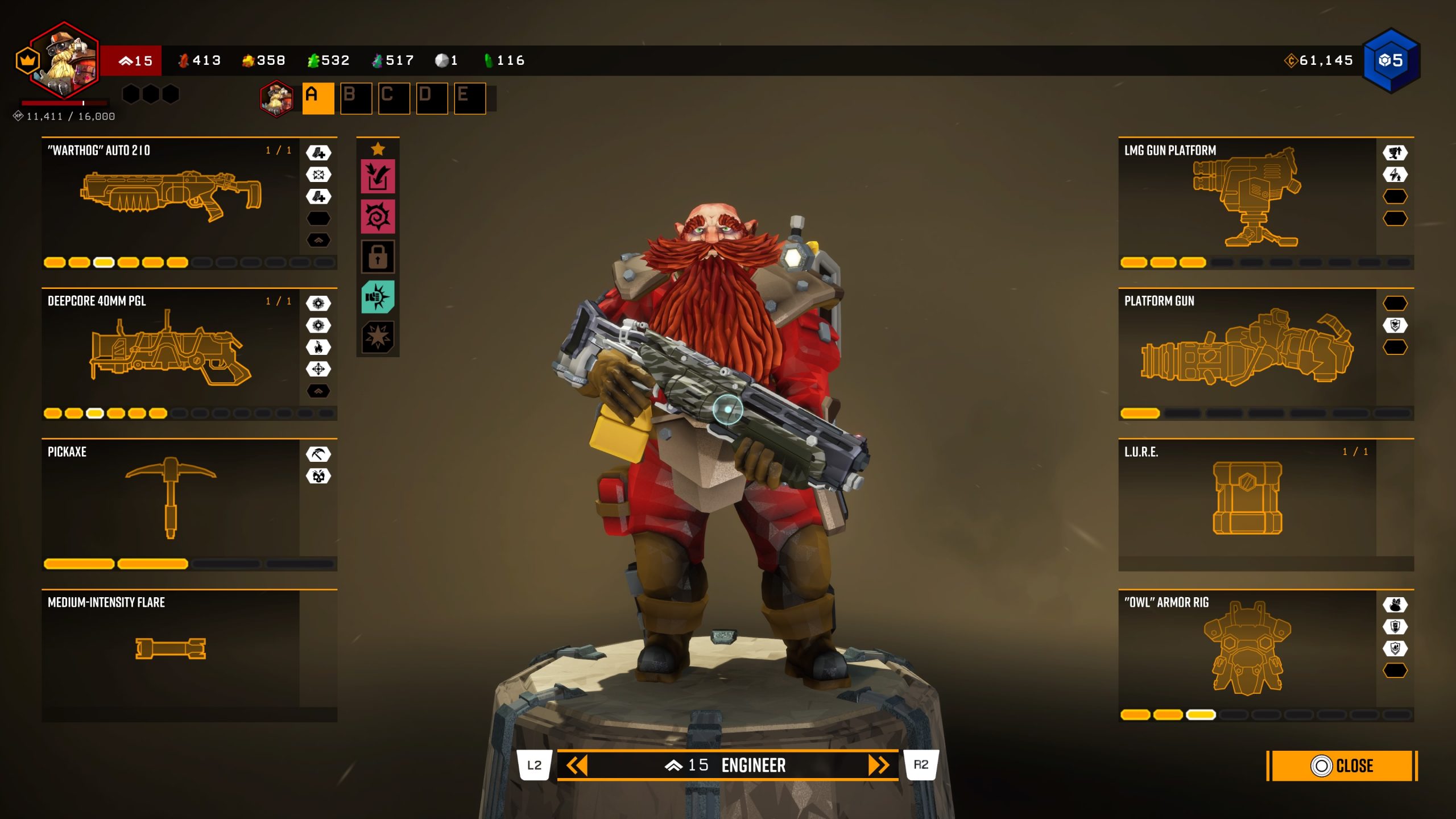 I played the PS5 version of Deep Rock Galactic, and I’m happy to report that the game performs extremely well on this system. Thanks to Sony’s SSD, levels load insanely fast, allowing you to plunge right into the action. The game manages to stick to its 60fps target the vast majority of the time, with the only hiccups being during particularly heavy battles where there are a ton of enemies on screen and explosions are going off left, right, and centre. The PS5’s Dualsense controller is also supported, with haptic feedback really kicking in when your drop pod is taking off or landing. Dynamic trigger functionality is also handled well, the most noticeable feature being when the right trigger seizes up when you are reloading.

Deep Rock Galactic is the first game I’ve really sunk my teeth into this year, and it set the bar high. Very high indeed. If you are a PS+ subscriber, you can pick this one up for free until the end of January on both PS5 and PS4, but even if you miss that deadline, it is well worth the asking price.

Deep Rock Galactic mixes incredible FPS action, addictive exploration, and endlessly entertaining gallows humour that combine to create one of the most compelling co-op experiences available in video games. Beautiful environments powered by incredible procedural generation will have me teaming up with friends to return to the hostile subterranean world of Hoxxes IV again, and again, and again.

Kristian (or Kris for short) is a copywriter by day, button presser by night. Based in the UK, Kris loves any game that allows him to swing a sword, fire an arrow, or sling a ball of fire, but ultimately he's not too fussy. On the rare occasion Kris isn't writing or gaming, you'll probably find him in the bath with a good book.
Related Articles: Deep Rock Galactic
Share
Tweet
Share
Submit