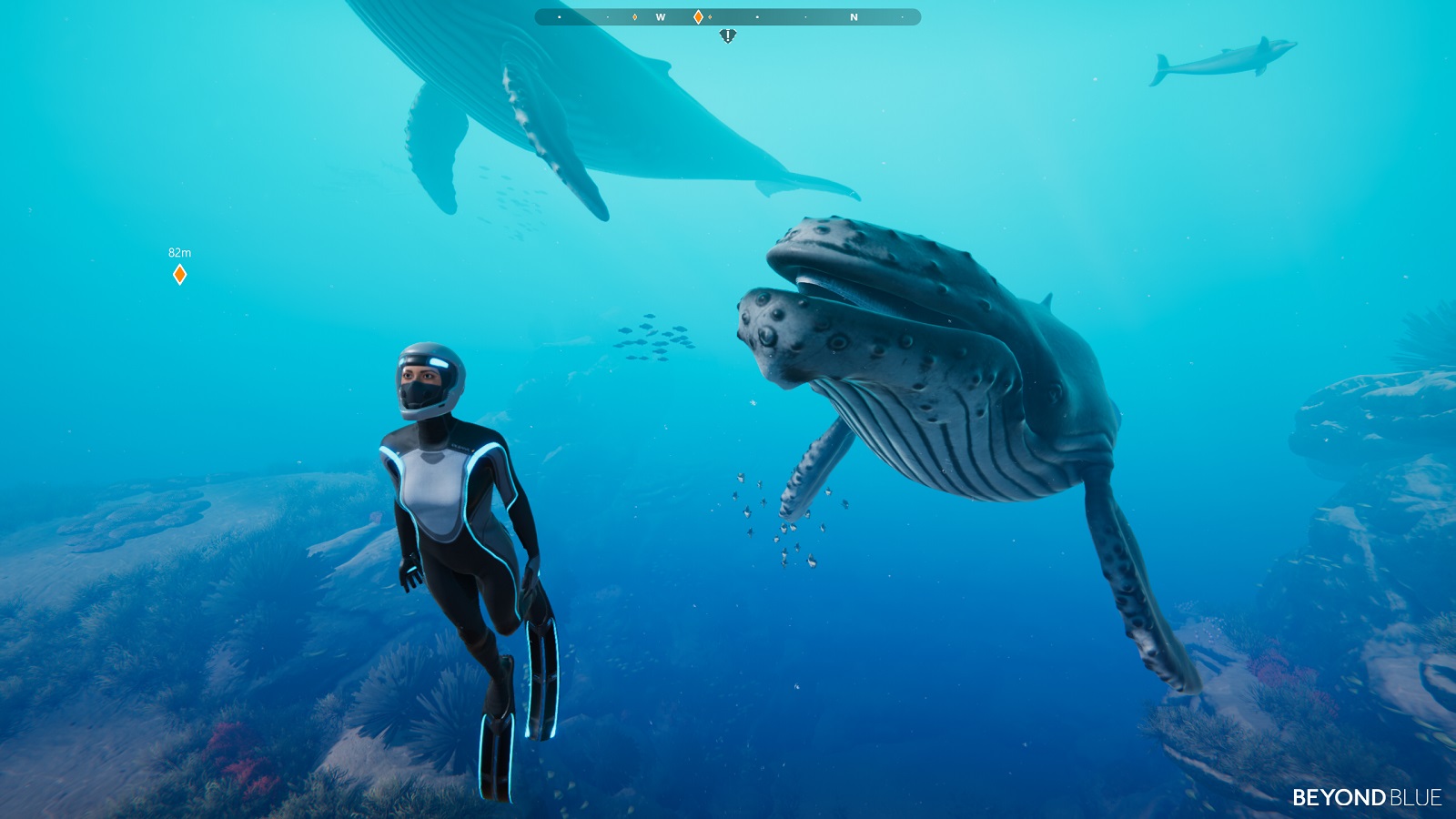 At some point or another in life it seems like just about everyone wants to be a marine biologist. We’ve all been or at least met that person but perhaps unfortunately, not many will go on to actually work in that field and for those few who do make it a reality, thanks for the work you do. As for the rest of us, we’ve all kept our fascination with the ocean fed over the years by following the exploits of one Jacques-Yves Cousteau, reading works by experts of the subject, or at the very least we have by now all seen some of the amazing documentaries available. The BBC might not be able to give us a decent Dr.Who lately but they can still smash out a good documentary like the Blue Planet series, the second of which features in Beyond Blue, a game that aims to give you a little taste of being a diver and deep-sea explorer, while teaching a little along the way. 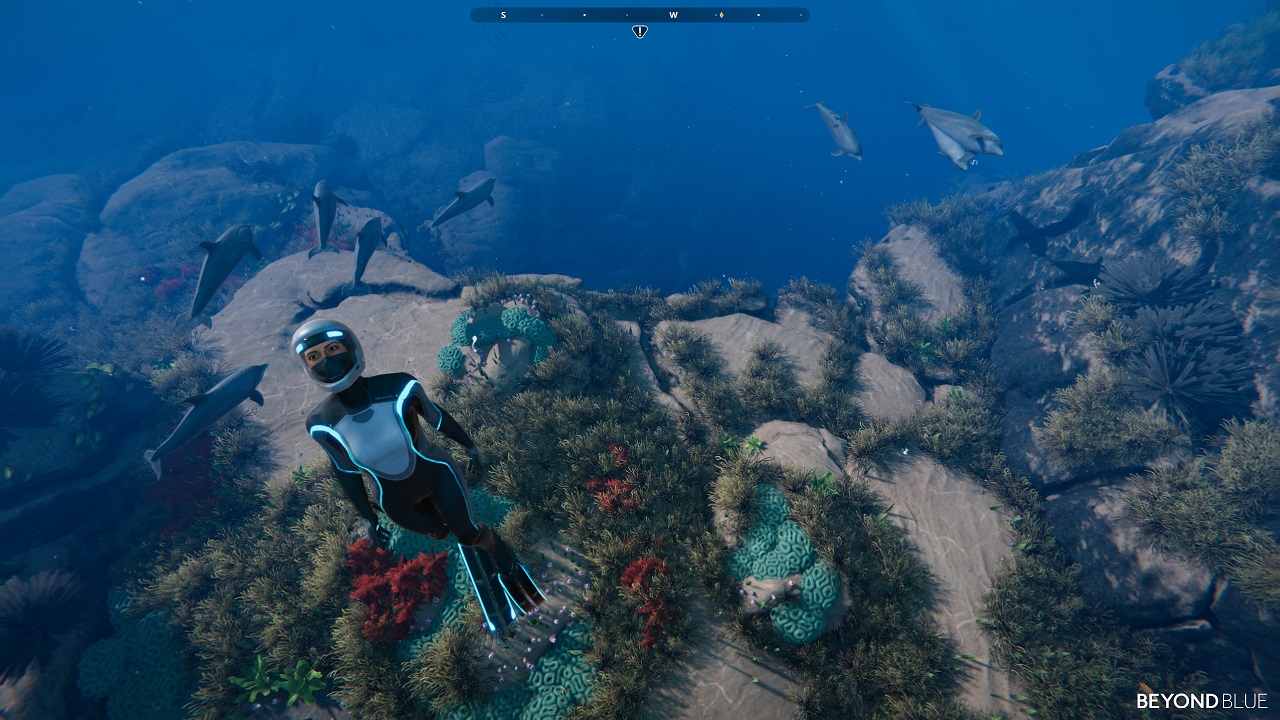 Before we dive any deeper (no apology offered for puns, you know I can’t help myself) into Beyond Blue it should be explained that this isn’t a game so much and leans more towards the “Interactive Experience” side of things. Even that’s a little bit of a misrepresentation… it almost comes across like a learning tool with interactive elements and a little bit of narrative in the mix. Unlike my last aquatic themed review, ManEater, there is no threat to the player in Beyond Blue. No survival horror, no hiding, fighting, weapons, or peril of any description. Instead this is a much more tranquil experience.

We follow the exploits of Mirai who is the diver with a newly formed research team, some time in the near future. Mirai and her small team are armed with some swish toys and gadgets enabling them to get closer than ever before and interact with marine life in ways previously impossible. As I said, there are no weapons or any such to be found here, instead you’re going to be swimming from one spot to another and scanning a lot of things as you do. You see, Mirai has a bit of a fascination with whales and the story of Beyond Blue sees her following a pod of sperm whales that she has previously encountered before the events of the game. 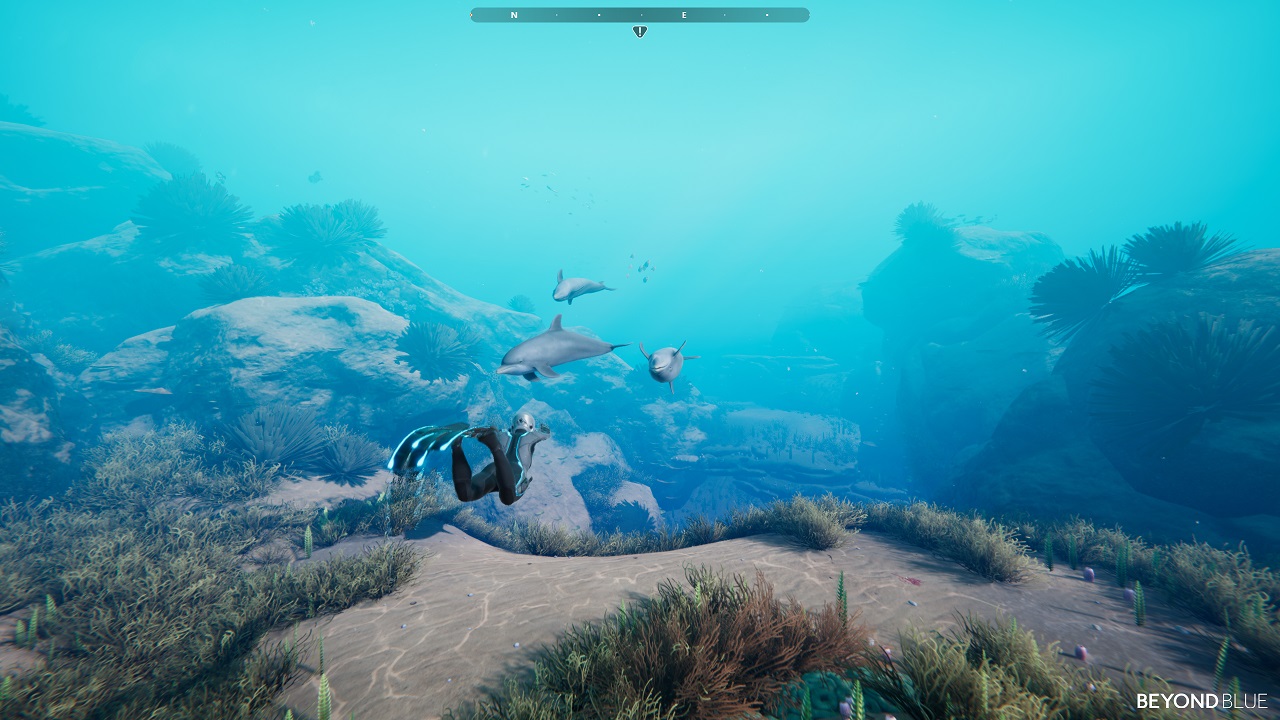 Following this family of whales will be the main driving force behind Beyond Blue’s narrative which is broken down into neat bite size chunks.Starting in shallow waters and diving into deeper and darker depths in later chapters, Mirai live streams some of the dives, like a live documentary setup supported by her team members who feed her audience questions and feedback as she goes, while other story chapters are done “off air” and are for the eyes of the team only. In between these chapters Mirai returns to her fancy little submarine which looks like it’d be an awesome place to hang out (Not sure about her taste in music though) and we get a little more backstory and interaction with other characters who are well voiced by some actors you may recognize and it was nice, as a massive fan of Babylon 5, to hear Mira Furlan voicing one character who has a unique but pleasant tone. The story is a slow burner but it does manage to provoke some thought from the player and tugs at the heart strings in a couple of places. 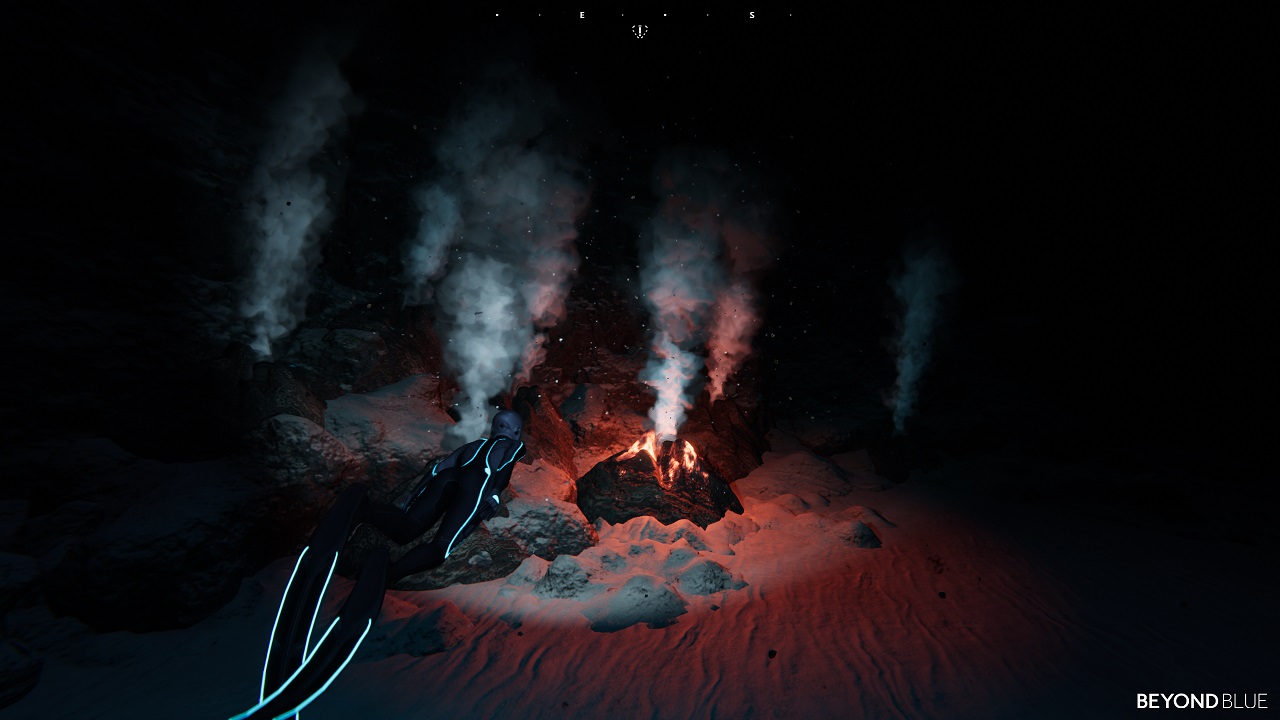 The submarine is also where you have a chance to view some of the data you will accumulate from all that scanning you do out on the dives. There’s a little desk that has some sort of holographic projector and every creature you scan gets its own little data entry. You can view the model of the animal and set that model to display certain behaviors; for example setting the model of a dolphin to display playful behavior or the model of a whale to perform a roll maneuver. In addition, as you scan each animal more and more, you’ll unlock not only different behavior characteristics but also little factoids about that particular animal like what sort of depth they live at and bits of information about their lives. In addition, while aboard the sub you will also have time to watch little video clips you unlock after each story chapter. These are actual video clips from documentaries like Blue Planet II and all of them sort of relate to events in Beyond Blue’s narrative or at least give some nice little glimpses of how marine biology works, why it’s important and how the people involved in real life are trying to affect change. They are short and interesting clips and don’t really get in the way of the rest of Beyond Blue. 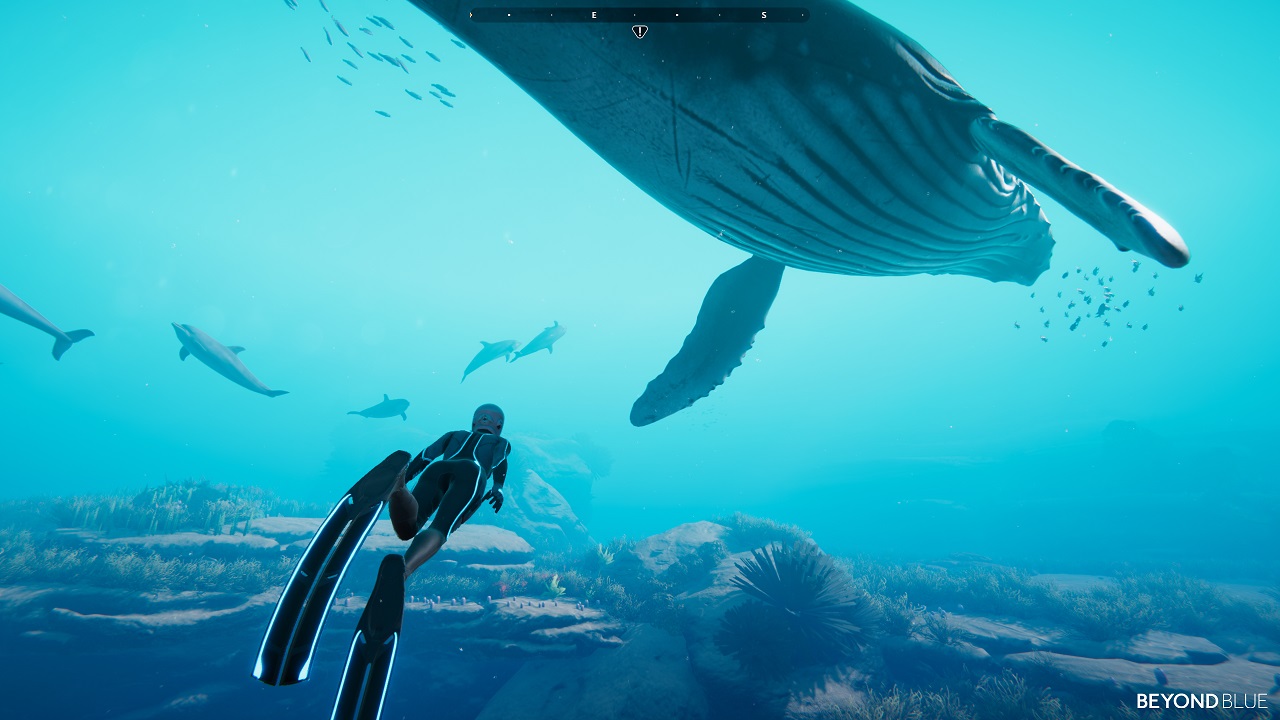 Visually, Beyond Blue looks pretty good, it isn’t going to melt graphics cards or explode eyeballs but the animals are well modeled and look like the real world counterparts and Beyond Blue captures the scale of these animals (and the ocean) well, big or small. From the perspective of someone who’s never seen these creatures in the flesh (although I did have the life frightened out of me by an octopus once, it looked like Cthulu to a 12 year old me!), the behavior patterns seem fairly convincing too. Sure, nothing is going to attack you and nothing really swims away from you with any sort of urgency but if they had simulated that behavior, it probably would have broken the rest of the game.

Textures are pretty good and colors pop nicely on the brighter looking marine life. Mirai can change her torch light from white, to UV and red and while down in the dark deep dive sections, the red torch light gave everything that eerie feel I imagine you’d have if you were really down there. Sound design is also satisfactory with the aforementioned voice acting being solid, sounds of the ocean and its inhabitants are similarly pleasing. There’s no music while you dive, just you, your voice comms, and the sound of the sea.

Beyond Blue isn’t going to be for everyone. If you’re after action and excitement, this isn’t going to be for you. It’s a slow but rather peaceful experience and I was pretty relaxed while playing though. Imagine Subnautica in creative mode, minus the building elements, and imagine David Attenborough is narrating it. You can add or subtract a few points depending on how interested you are personally in ocean studies.

Grumpy gamer from UK with a keen interest in retro gaming and modding. Can also be found cycling up and down mountains, walking dogs, watching Sci-Fi and reading all sorts of books.
Related Articles: Beyond Blue
Share
Tweet
Share
Submit