It’s the Inquisition and those with little to no faith shall be punished. If that’s not bad enough, there are also various undead creatures and demonic monsters waiting in the darkness. The Templars, armed with their faith and their weapons, are the only ones capable of dispatching of these fiends. Fortunately, you are also one of these Templars. Exploring the depths of the fallen Temple won’t be easy, but with a steady hand and unshakable faith, you’ll strike down anything in your way.

Dark Devotion is a 2D action game that focuses on combat and exploration. As mentioned before, you play as a Templar who has decided to journey through the fallen Temple. At first, you only have your faith and fists, but you can obtain a starting sword and shield from the blacksmith in the hub area. As you explore the 2D world, you’ll obtain various weapons and consumables from enemies, chests, some corpses, and special statues. You have two loadouts at any time, which allows you to carry two different weapons at the same time. You can swap between them with the press of a button, which is extremely helpful if you have weapons designed for certain situations. For example, you may have a broadsword in one loadout and a bow and arrow in the other. You’ll still have to pick and choose what to take with you, but at least you aren’t limited to only one weapon. Plus, you’ll have access to weapons such as broadswords, bows and arrows, maces, cudgels, claws, spears, spellbooks, and more. 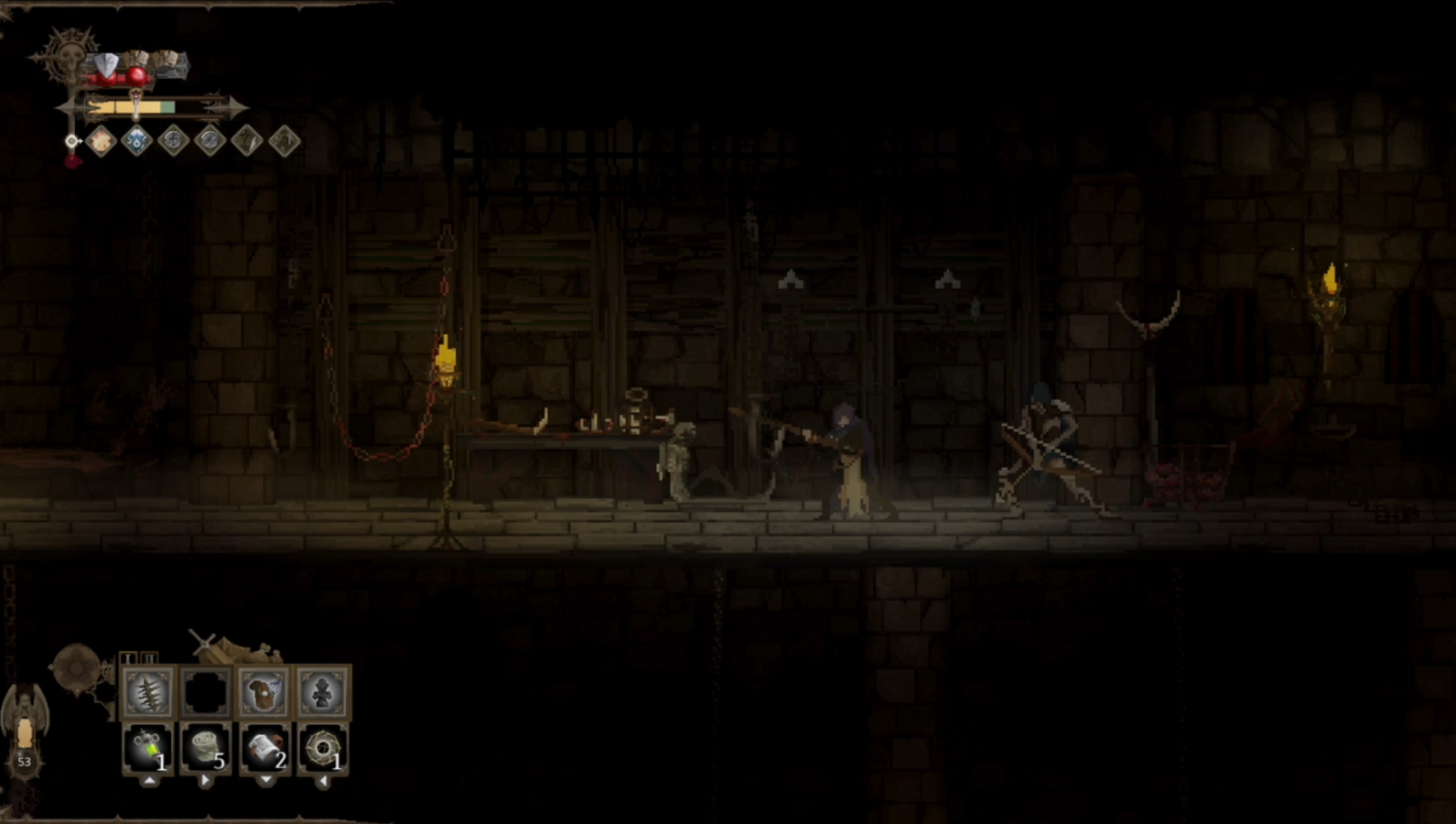 The Temple consists of a plethora of rooms that each have one or more exits in them. Each room leads into another and branch out into a different direction. You can check the map at any time and chart out a course if you want to head a certain way. If you haven’t been to a certain location yet, then it’ll just show an arrow pointing towards the next room, which essentially narrows down where an exit might be. The map keeps track of everywhere you’ve been, even after death. And yes, you will end up dying a fair amount. If you’ve got more skill, luck, or just get a better setup from exploration, then you may not die as much. Don’t be discouraged because dying is a part of the experience and it helps you learn how to better handle certain foes, bosses included. That being said, some bosses are infuriating to fight and you might want to throw your controller.

When you die, you respawn back at the hub with the starting setup. The starting setup is your fists, a totem that sets your health to two hearts, and some old rags that set your armor to two shields. You’ll want to visit the blacksmith before heading out because you can obtain the starting sword and shield whenever you want for no cost. The same thing applies for any weapons that you’ve collected blueprints for, which is really sweet. If you’ve found a blueprint for a weapon you really love, then you’ll be able to head out with a smile on your face and a deadly tool in your hands. The downside is that you can only set up your first loadout with blacksmith gear, so your second loadout will have to be formed with whatever you find in the Temple. If you get far enough in, you can unlock shortcuts to different areas of the map, which will help alleviate dying and also reduce going through the same areas over and over again. 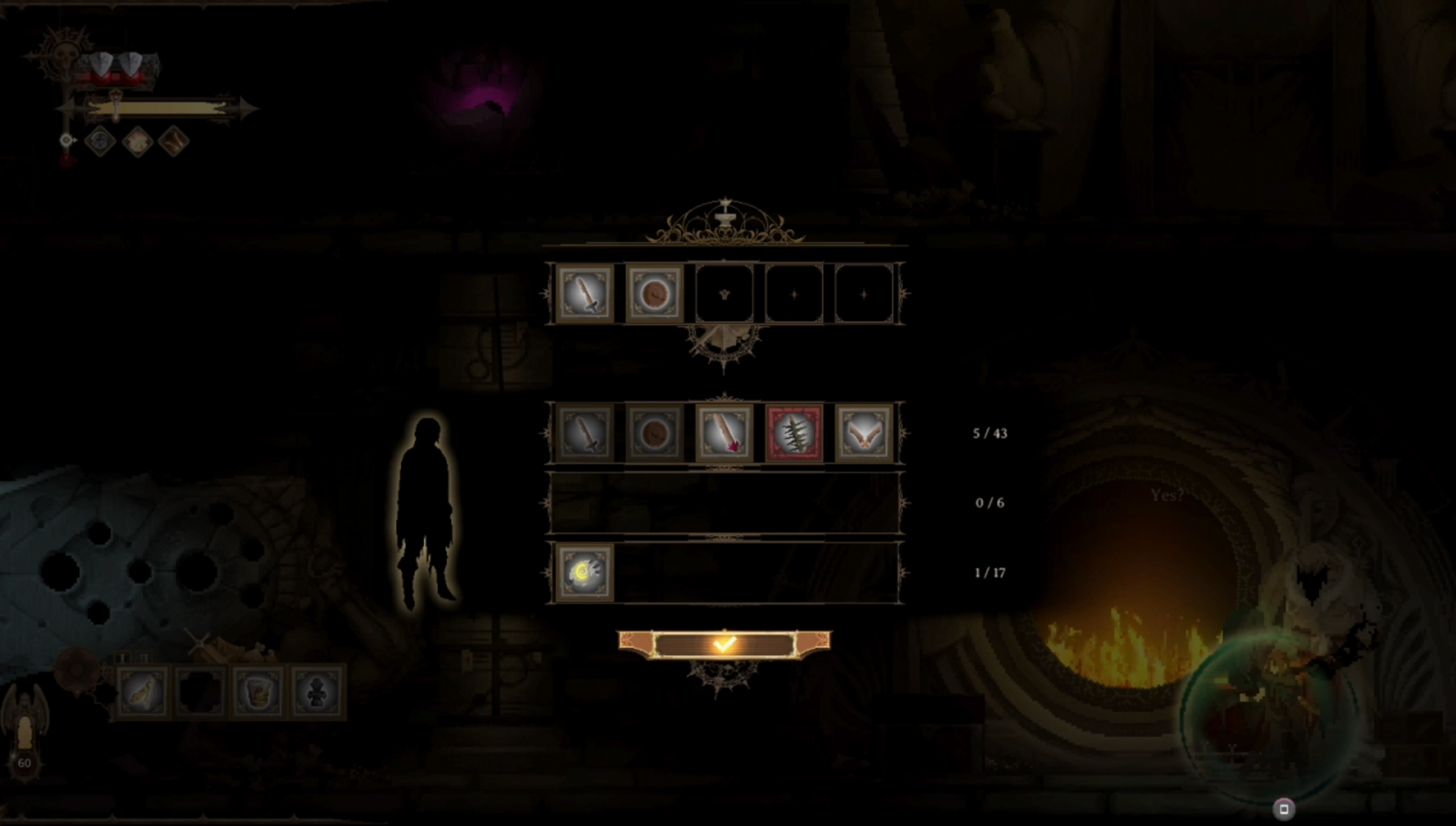 The combat boils down to attacking, blocking, dodging, and using items. Every weapon has its own damage dealt and attack speed, so keep that in mind when deciding what to use. Blocking can only be done if you have a one-handed weapon and a shield equipped; otherwise you’ll attempt to block and take a hit. Trust me, I tried to block with a cudgel and got a sword to the face. You also need to maintain your stamina or else you’ll leave yourself wide open for some punishment. Attacking, blocking a hit, and dodging all require stamina, although they each cost different amounts. Different weapons also cost different amounts of stamina to attack with as well. Stamina regenerates when not using it, so don’t worry too much. 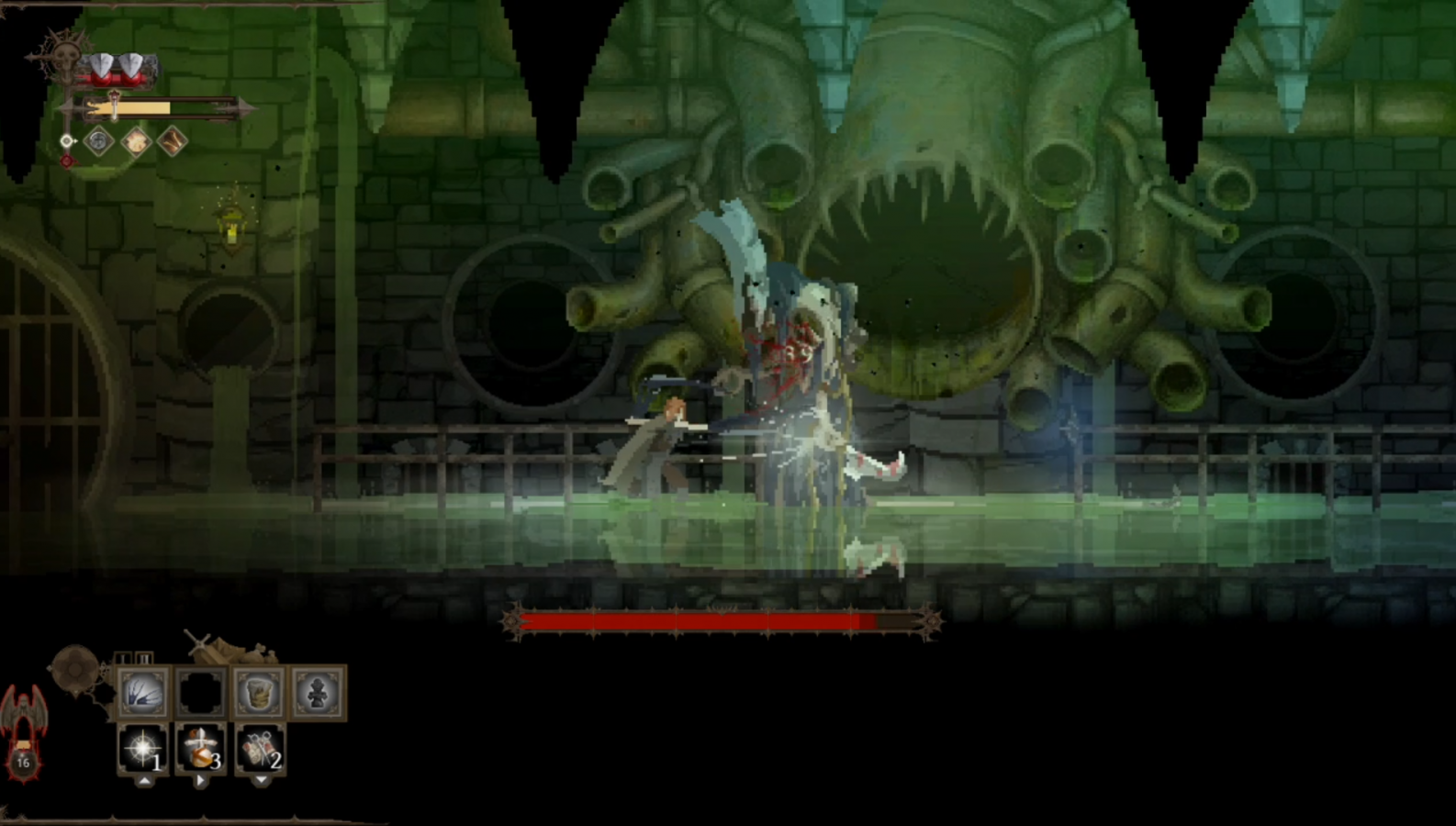 You can only carry four different items, but you can carry an unlimited number of each item you’re holding. Items stack in your inventory, which is extremely helpful in the long run. The most I amassed at once for an item was eight bandages that came in handy during a boss fight. Besides bandages, there are also bombs, holy explosives, injection boosts, armor repair kits, surgical equipment, and more. The injections provide various boosts for one room such as increased stamina regeneration, improved accuracy, and increased strength. Armor repair kits restore all broken armor, while bandages heal a bit of health. Surgical equipment cures you of a disease (more on that in a moment) but hurts you slightly in the process.

Diseases can be obtained a variety of ways, such as wearing broken armor for too long, staying at low health for too long, falling from great heights too many times, coming into contact with poison gas, taking some extremely brutal hits, and more. Diseases can be cured by either refilling your armor or health, using a surgical item, or praying at disease purging statues. The former two options only remove one disease at a time, while the latter removes all afflictions at the same time. Praying costs faith, which you obtain by defeating enemies. You can only hold a certain amount of faith at a time, but it isn’t hard to accumulate. You also use faith by praying at healing statues, magistrate chests, and special doorways. You won’t be able to open and use everything though, so choose where you spend your faith wisely. 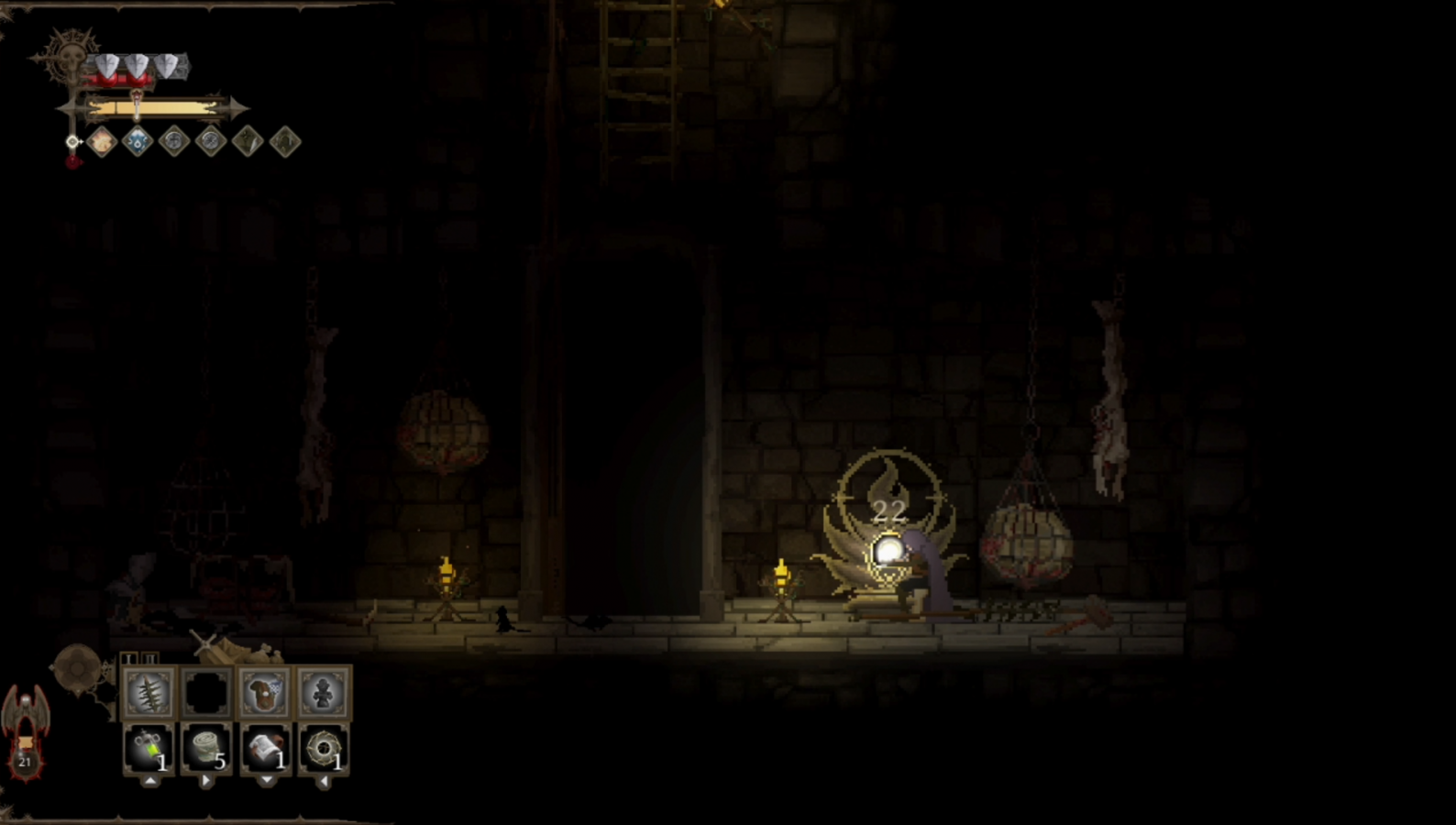 The atmosphere of the game is dark, dreary, and emits a feeling of hopelessness. The sound design, from the metal clangs to the creepy groans to the holy chimes, all sound good and add to the tone of the world. Combat is easy to learn, but hard to master. It follows the “learn attack patterns and wait for your chance to strike” form of combat, which will be familiar to fans of games like Dark Souls, Bloodborne, and Dead Cells. The same rings true for bosses, although they can be much more frustrating than the regular enemies at times. That being said, it feels incredible once you’ve taken down that nasty creature that’s been beating you down for the past 20 minutes. In the end, Dark Devotion is a challenging 2D action game that isn’t geared towards more casual players. If you’ve got skill, reflexes, and patience, or are at least willing to put in the time to improve these characteristics, then Dark Devotion has plenty of action for you.

Dark Devotion is a 2D action game that focuses on combat and exploration. With a variety of weapons and items, foes, and branching pathways, you'll have plenty to fight with and experience. Some enemies, especially certain bosses, are frustrating and may have you considering throwing your controller. Even so, succeeding feels rewarding.

Codi loves to play video games and watch movies. He will watch almost any kind of movie just to experience them. His ideas take inspiration from the shows and movies he watches, and games he plays. He also loves a good pun.
Related Articles: Dark Devotion
Share
Tweet
Share
Submit