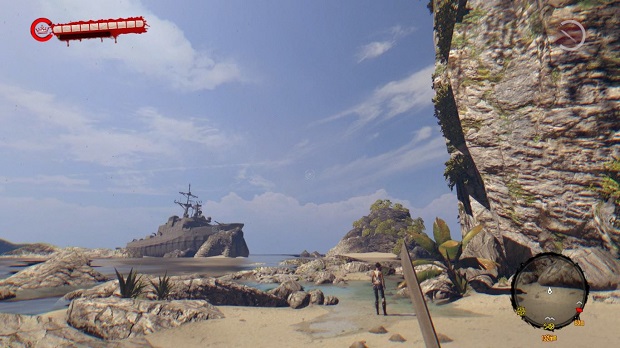 The original Dead Island started the series strong in 2011, whereas Riptide in 2013 made for a fairly weak follow-up. The maze-like areas serve to artificially lengthen the game, half of the main quests are centered around mowing down waves of zombies, the side quests are largely uninteresting, and there are only two additions to the skill trees. However, this review isn’t about my disappointment with the content itself, but about whether the Definitive Edition improves the game or increases its draw.

The short answer is no.

Of course, Riptide Definitive is pretty. The graphics have been fully remastered and the game utilizes a new lighting system. In fact, when you put it side-by-side with the old version, the difference is striking. One visual mistake they did make was altering the color of zombie blood; it sprays out fairly realistically, but it’s always a black or chrome shade that feels very out of place.

With Dead Island Definitive Edition, the video settings could be optimized for everything from the average PC to a more powerful machine. Riptide, on the other hand, begs for a top-performing computer, otherwise you’re going to have a bad time. This is particularly puzzling as the two games seem to have identical system requirements.

Even though I chose “best performance” when playing on my nothing-special laptop, combat and exploration were still negatively affected; my character walked slowly, with sprinting only helping slightly, and it constantly felt like I was swinging blindly at enemies. The mouse even lagged on menus and when trying to swap between weapons.

If that weren’t bad enough, hit detection in itself is spotty, and stamina seems to drain much faster. I imported my high-level character from Dead Island Definitive when playing, but it felt like all the skills I’d unlocked made no impact. Besides tiring quickly, certain types of zombies were an absolute chore to kill. Even walkers seem to do more damage and have a greater reach.

I did notice a few AI problems, much like in my Dead Island Definitive review. The Infected were a bit better at staying on target, but Rams tended to get lazy, leisurely strolling around and walking into walls. Thugs are confused and less aggressive, making them easier to kill, and most Butchers are less frightening than in the original, save for the boss monster you meet called Ogre.

Overall the difficulty feels very unbalanced. More often than not, no quest tracking will appear on the minimap, so you’re left trying to figure out a path until you’re only 30 meters away. Clearing out the Santa Maria Mission and dealing with waves of undead on the roof of the theatre were grueling, but the end battles felt effortless. You enjoy moments of triumph throughout your adventure, but wrapping things up is anticlimactic.

Don’t get me wrong, I did enjoy some of my time with Riptide Definitive, though I imagine much of that was due to co-op play. I had fun teaming up to kill the infected with a friend, and I was able to appreciate the stunning visuals and fluid movement that a true gaming rig can produce. However, the beauty of watery Palanai can’t quite eclipse the glitches peppered throughout Riptide. Sticking out of walls and hands not wrapping around the rungs of ladders are the least of your concerns. The worst of it was undoubtedly when I respawned on the edge of the playable area during a boss fight, right behind a fence. There was literally no way for me to get around it or over it. If I had been playing singleplayer, I have no idea what I would’ve done.

While that was the height of gameplay bugs I encountered, the audio glitches were especially plentiful. In the beginning of the game, there were issues with audio overlapping in cutscenes. When I first discovered the Santa Maria Mission, all sounds were dulled to an unsettling murmur, with any zombie grunts melting into the hum. Then every time I would load the game again in that spot, I’d hear a loud, repetitive noise that sounded like someone pounding on a door. Also, just in general, they included too many lines of idle dialogue, surrounding you with a mess of chatter when you’re with a group of survivors.

From endless rescue missions to an incessant beeping that started after accepting a quest, Riptide Definitive does little to revive its namesake. A pretty package doesn’t matter if what’s inside is broken. I tried to branch out and do side missions, but at some point I grew so weary of it all that I wanted to speed run through the main story and get it over with.

The definitive edition of Dead Island Riptide is hardly an improvement. The gorgeous visuals may distract you from the tedious gameplay and odd bugs for a while, but it doesn’t last forever.

Sarah Marchant is an office admin for a nerdy t-shirt company. She has a soft spot for indie games, a passion for story-driven titles, and a weakness for cooking games and anything with zombies.
Related Articles: Dead Island Riptide Definitive Edition
Share
Tweet
Share
Submit