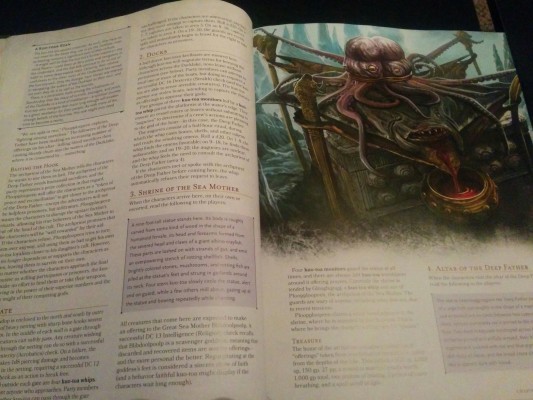 The Underdark is one of the most popular, yet least understood, settings in the Forgotten Realms universe. It’s also a setting that most players are usually completely unprepared to tackle. The dangers that lie in the Underdark aren’t just her denizens, though. The political machinations of the Drow Elves, as well as the demons they worship are far more lethal. Author and story creator Christopher Perkins gives us the forward that unlocks his thought process that lead to the story laid out in this Out of the Abyss dungeon module. With co-authors Adam Lee, and Richard Whitters, as well as story consultants R.A. Salvatore, and Troy Denning at the helm, I was eager to dive into a new adventure.

If you are a would-be DM pressed to running this module, you might want to follow Christopher Perkins and his path — pick up copies of the Drizzt Do’urden novels. This module takes place bookended between Homeland, Exile, and Sojourn, plumbing the depths of the Underdark.

This review of Out of the Abyss is built from a DM’s perspective, but players can read it as well. Sections marked as *SPOILERS* will be identified as such, though obviously a DM can read the entire thing.

“To learn how to use a sword, one must first master when to use a sword” – Drizzt Do’ourden
The module is set up for brand new teams, expecting that characters will start at level 1 and end the adventure around level 15. Unfortunately for your adventurers, they’ve become victims of a Drow raiding party. You weren’t part of a band of heroes, you didn’t set off into the depths to find treasure – you were just enjoying your blissful ignorance when you were rendered unconscious with a poisoned dart. Your fate now is to be food for Drow pets, entertainment, slaves, or something far worse. Bound and shackled at your hands, feet, and throat, your eyes capture very little light. Despite being surrounded by other victims, you’ve never felt so isolated and alone. Your thoughts turn darker than the cave walls that surround you — even if you could escape this cage, where would you go? You won’t survive this on your own.

“I fear little from enemies. I fear more from friend” – Drizzt Do’urden
Out of the Abyss is split into 17 Chapters, splitting this adventure into far more segments beyond escaping your bonds and then escaping the dark. The adventurers are actually stuck in….

…the Drow outpost of Velkynvelve. In their case the players are locked in their cage with ten other prisoners. The whole wagon cage is heading to Menzoberranzan, unless you can enact an escape. The book gives full biographies for all ten other captives, including a few disgraced captured Drow elves. Best of all, it also breaks out several scenarios that players might try to develop, including simply sleeping and waiting.

There are a total of six major destinations to explore in this module, and depending on player choice and dice rolls. Whether the players brought any of the other ten prisoners can have an impact on their ability to navigate the complex maze that is the Underdark. The caves are uneven and slick, and having to concentrate on not falling leaves very little of the player’s perception trait to successfully detect an ambush. Then there is the question regarding the intentions of those other ex-prisoners — in a land this dark, people are not always what they seem.

This is the largest map. They are detailed, but small.

Testing the Underdark
The only way to really test out the module was to run it. Having just moved to Texas with few friends to game with, I did the next best thing – I took my books to the local geek shop and ran the campaign with the equivalent of a pickup group. A few of them had read the Drizzt books, or ran makeshift modules before, but all of them had heard of The Underdark. I was very appreciative of these folks for letting me DM a run, having just met them.

We set up with four players committing to the campaign. Two of them were seasoned D&D veterans (we swapped stories about our original D&D guides from “back in the day”) one was more intermediate, and his friend was more of a rookie. We’ve run two campaigns, and I can certainly confirm that the unfamiliarity of the locale gave even those veterans a moment of pause.

I read the book from cover to cover to ensure I could properly tackle anything the team threw at me, and I’m glad I did. There are some aspects I stole from latter parts of the book, integrating it as snippets of foreshadowing. Thankfully, the team has put a great amount of detail into this book, giving me a fantastic flagstone to stand on as DM for this campaign.

My only real complaint for the campaign comes from the maps. There are solid maps throughout Out of the Abyss, but many of them are rather tiny. The book clocks in at 254 pages (plus another page to encourage people to check out Swords of the Coast (You can see our very-excited hands-on preview from E3 on that title) — a few extra appendix pages to hold larger versions of those resources would have helped. That said, it’s a fairly minor gripe.

The weapons and armor of The Underdark
*SPOILERS* One of the DM-level highlights (and, if you’ve done your job correctly, for the players as well) is Drow weaponry. There are opportunities to pick up weapons and armor that most players have never encountered, and some of these can even have personalities of their own. If players are lucky enough to find the named weapon in this adventure, you as the DM will get the chance to cut your real storytelling skills loose. *END SPOILERS*

A ghoulish cast of characters.

Supplemental materials for your adventure
Out of the Abyss also provides alternate story mechanics, a great deal of background that you can expand upon, drawings (both final and sketched), sigils and banners, and an ever-expanding cast of foes that are eagerly waiting to kill off your adventuring party. Better yet, it also does a great job of helping me craft the story with a lot of detail on every character, encounter, and location in one easy, well organized, place.

While my adventure is still in progress, you’ll be able to pick up this module on for yourself — it shipped today. In practice, I found that the absolutely foreign world of The Underdark was a challenge for players, opening them to all manner of calamities I could concoct. I had to rebuild quickly as a fifth player wanted to join in the fun, and then a sixth. I think that speaks to the popularity of the module, as well as the allure of the exotic local. Our rookie player was a bit overwhelmed, but true teamwork came out as a result, which is the best possible outcome.

Out of the Abyss

An exotic and very approachable module, Out of the Abyss is unfamiliar territory for most. The new locale will challenge veterans and newcomers alike, and this module book was a fantastic resource to facilitate agile storytelling. If you are an old-timer like me, or just getting into the world of Dungeons & Dragons, Out of the Abyss is a great supplemental module.

Ron Burke is the Editor in Chief for Gaming Trend. Currently living in Fort Worth, Texas, Ron is an old-school gamer who enjoys CRPGs, action/adventure, platformers, music games, and has recently gotten into tabletop gaming. Ron is also a fourth degree black belt, with a Master's rank in Matsumura Seito Shōrin-ryū, Moo Duk Kwan Tang Soo Do, Universal Tang Soo Do Alliance, and International Tang Soo Do Federation. He also holds ranks in several other styles in his search to be a well-rounded fighter. Ron has been married to Gaming Trend Editor, Laura Burke, for 21 years. They have three dogs - Pazuzu (Irish Terrier), Atë, and Calliope (both Australian Kelpie/Pit Bull mixes).
Related Articles: Out of the Abyss
Share
Tweet
Share
Submit