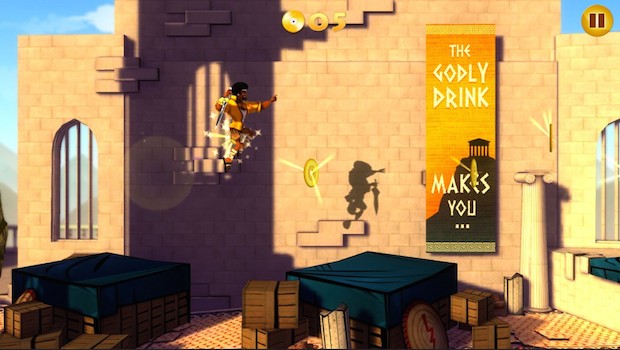 There are three basic ingredients that make a good platformer: solid controls, challenging levels and engaging design. You can read back through the catalog of classic platformers and find these three tenets, clear as day, in every one. The fact that Funk of the Titans nails one of those tenets so well is why I’m disappointed it didn’t nail the other two pillars.

Set in a world where funk is all but dead, you take on the role of Perseus, the sole master of Funk-Fu, on a mission to restore funk to its proper spot at the top. In a land that is a mash-up of ancient Roman times and 70’s style, you have to defeat the Titans who are keeping funk down. The game makes heavy use of the “funk” terminology, though if I’m being a little bit of a music snob, the game leans much more towards disco than the James Brown brand of funk. Throughout your quest, you work alongside funky versions of Greek gods, including a disco-princess Athena and a Zeus that looks surprisingly like Samuel L. Jackson. There is clear inspiration drawn from works like Black Dynamite, especially in the protagonist’s appearance and proficiency for “Funk-Fu.”

The visuals have an interesting contrast between ancient ruins and disco imagery.

Theme is what Titans nails in spades. Stylistic enemy design, plenty of well-designed pop culture references, and a charming aesthetic all carry the funk theme well in Titans. The main antagonists of the game are three genres of music; pop, rap and rock. Each genre has a titan to defeat, and are all styled after famous musicians. It borders on cheesy, but at least fits the rest of the game’s over-the-top style.

While theme is solid in Funk of the Titans, gameplay is a definite shortcoming for this indie platformer. Platformer is the interesting word, because the game does contain a great deal of jumping on platforms, but there is no direct control outside of two buttons: jump and attack. Your character automatically runs through the level on his own, more akin to endless runners and phone games than typical console platformers. You collect coins (called vinyls), time jumps to avoid spikes, and smack away any enemies in your path.

Repetition is a major problem in the gameplay. Each level in Titans just seems to meld together after a while, as you tend to face the same situations over and over again. There is little innovation in the mechanics, as you only have two buttons to work with and no option to control speed or direction. Later on, moving walls get introduced, and there is some wall-jumping and other platforming staples, but they never develop past the level of simple trail-following. There’s only one real path through the level, with the occasional two-step detour to pick up a Pegasus trophy being the only thing to distract you from the breadcrumb trail of vinyl-coins leading you to the finish line.

The lack of any control of your character outside of “jump” and “attack” makes levels very repetitive and boring.

If the levels feel repetitive, the bosses feel redundant. Each world has a miniboss (which is the same fight, copy-pasted three times) and a boss to defeat. You battle these bosses in a QTE, tapping the buttons to win either a fight, in the minibosses’ case, or a dance-off against the world bosses. The strange thing is that in the world boss battles, there is clearly a dance-off happening, yet the QTE button presses don’t line up with the music at all. It would’ve made a lot of sense to add rhythm in as a factor in a game thematically based in music, but they’re just button presses that happen to occur over music.

Outside of the main levels, there is a minigame earned whenever you find the Pegasus trophy, which amounts to little more than a rehash of the classic Helicopter. Worlds are linear, with no deviation from the set path to the world boss. There’s a level progression, but it has no actual effect on the game outside of increasing an arbitrary number and allowing you to purchase more cosmetic masks with your vinyls.

Performance is a mixed bag with Titans. The game looks stylish enough, and while it isn’t exactly a next-gen powerhouse, it still has a well-designed aesthetic that keeps it visually appealing. There are weird framerate drops and sudden character glitches, however, that can range from slight disturbances to causing player death. It is extremely difficult to measure out jumps, both because of odd hitboxes for obstacles and because the game will sometimes snap your protagonist to a wall or bounce pad, and then not do the same later on.

Visuals are initially interesting, but get repeated over the span of many levels in a single world.

Replayability is pretty poor, with only a drive to obtain the medals for each level to keep you going. Some Pegasus trophies are locked behind doors, requiring you to replay the level with the right weapon to obtain it, which is good if you feel the need to replay the game at all. With the lack of any real sense of accomplishment at the end of a level, though, it is more likely you’ll drop this game after completing its three worlds. The number of levels is about right for an indie title, but the repeated use of mechanics, lack of enemy and obstacle variety and the same visuals recycled for multiple levels makes many of the stages blend together after the fact.

The game is a ten dollar indie title, and it certainly isn’t at the level of awful seen during the flood of Xbox Arcade indies. The charm and aesthetic is enough to draw you in for at least a sitting or two, and the game is easy to beat in a single afternoon. It feels more like a proof of concept, and hopefully in the future, the studio might be willing to invest in a full-fledged platformer with another unique theme and style. It’s just difficult to make the recommendation with so many glaring flaws in the game’s design.

Funk of the Titans

Funk of the Titans is a game with its heart in the right place, but repetitively boring gameplay and QTE’s keep the charm from winning out in the end.

I'm a Texas native and graduate of Texas Tech University, freelancing in the gaming journalism industry. I love games, live music, Texas BBQ and sports. Favorite games are The Witcher 2, anything from Bioware, the Kingdom Hearts series and Dota 2.
Related Articles: Funk of the Titans
Share
Tweet
Share
Submit