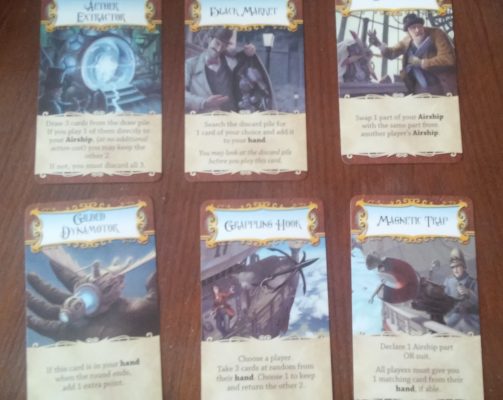 An airship legacy is ripe for the making, with only the other players in your way. Dastardly Dirigibles is a game of airship construction and hand management for two to five players. The concept is simple: choose from parts of many ships to build yours more quickly and efficiently than your opponent’s. You play cards from your hand onto a ship blueprint, building as the game progresses and trying to keep your opponents on their toes.

The ultimate goal is to construct an airship more quickly and efficiently than your opponents, all the while trying to counter their maneuvers through various means. Players have ways of interrupting one another’s plans while they endeavor to create the perfect ship for themselves.

Each card and underlying blueprint have character, but nothing else.

I have to be up front and say that the play mats that come with the game were woefully underthought. The blueprint design is thematic and the rules explanation is concise, but these glossy paper mats are guaranteed to fall apart over time. They need to be unfolded and then refolded for transport, which will weaken the creases and eventually ruin them. They are not strictly necessary to play with and you could copy them yourself, but it’s a shame that the only part of the game other than the cards is so prone to degradation.

The game consists of nine suits, each with a different type of airship, two of which are wild. Ships consist of seven parts, only two of which (the engines) are interchangeable. You deal five cards from the draw pile and each player deals a card face up into the Emporium.  Everyone will  able to access the Emporium in future turns. A turn consists of three actions split however you choose between a few options. be it switching a card in your hand with one from the draw pile or Emporium, playing a special card, or replacing the cards in the Emporium. When you play a card into your airship, everyone who can do so, must play a card of the same type, even if it requires them to replace a more optimal card they already played. This creates an interesting timing mechanic where you must keep track of what you and your opponents are playing. There is also a very small smattering of special cards to spice things up, and I appreciated what their unique abilities add to the experience. Unfortunately these come up rarely and their effects are not enormous.

Once someone completes your airship you finish the turn order and the round is over. At least,that is the implication I get; the rules are frustratingly unclear on that point. You score two points for the most used suit in your airship and one for each card of every other suit. If your airship is incomplete you do not gain these bonus points. There are a few options for bonuses but someone can get a free twenty points for a Muddle, which is a completed ship constructed of completely different parts with no wilds. After three total rounds you compare point totals to determine the winner.

The art style is a heartwarming steampunk, full of cogs and wheels and extra bits that serve no purpose but to look fantastic (like yours truly). The different suits each have a cohesive design that goes a great distance to sell the world: this is a place that could have competitive airship designers. The special cards are similarly inspired, with goggled men and women committing dastardly deeds of mad science and buckling one another’s swashes. The final ships feel cobbled together and you genuinely want to build your ship the right way, even for aesthetic reasons alone.

Dastardly Dirigibles is a speedy, efficient game with not enough going on. You draw cards, play cards, and then the game is over and you count your points. I wish the each suit had differing abilities or there were more special cards to help you strategize, but my experience with it has been profoundly unmemorable. I enjoyed trying to outwit the other players with card timing and keeping track of everyone’s hands, but that is the only genuine fun in Dastardly Dirigibles.

Dastardly Dirigibles is a simplistic steampunk strategy game that never manages to be truly interesting or engaging. Despite the fun of wrecking an opponent’s strategy and building your very own airship, there is too little unique about this game to recommend it for consistent play.

John Farrell is a legal aid attorney specializing in domestic violence, living in West Chester Pennsylvania. You can listen to him travel the weird west as Carrie A. Nation in the Joker's Wild podcast at: https://jokerswildpodcast.weebly.com/
Related Articles: Dastardly Dirigibles, Tabletop
Share
Tweet
Share
Submit