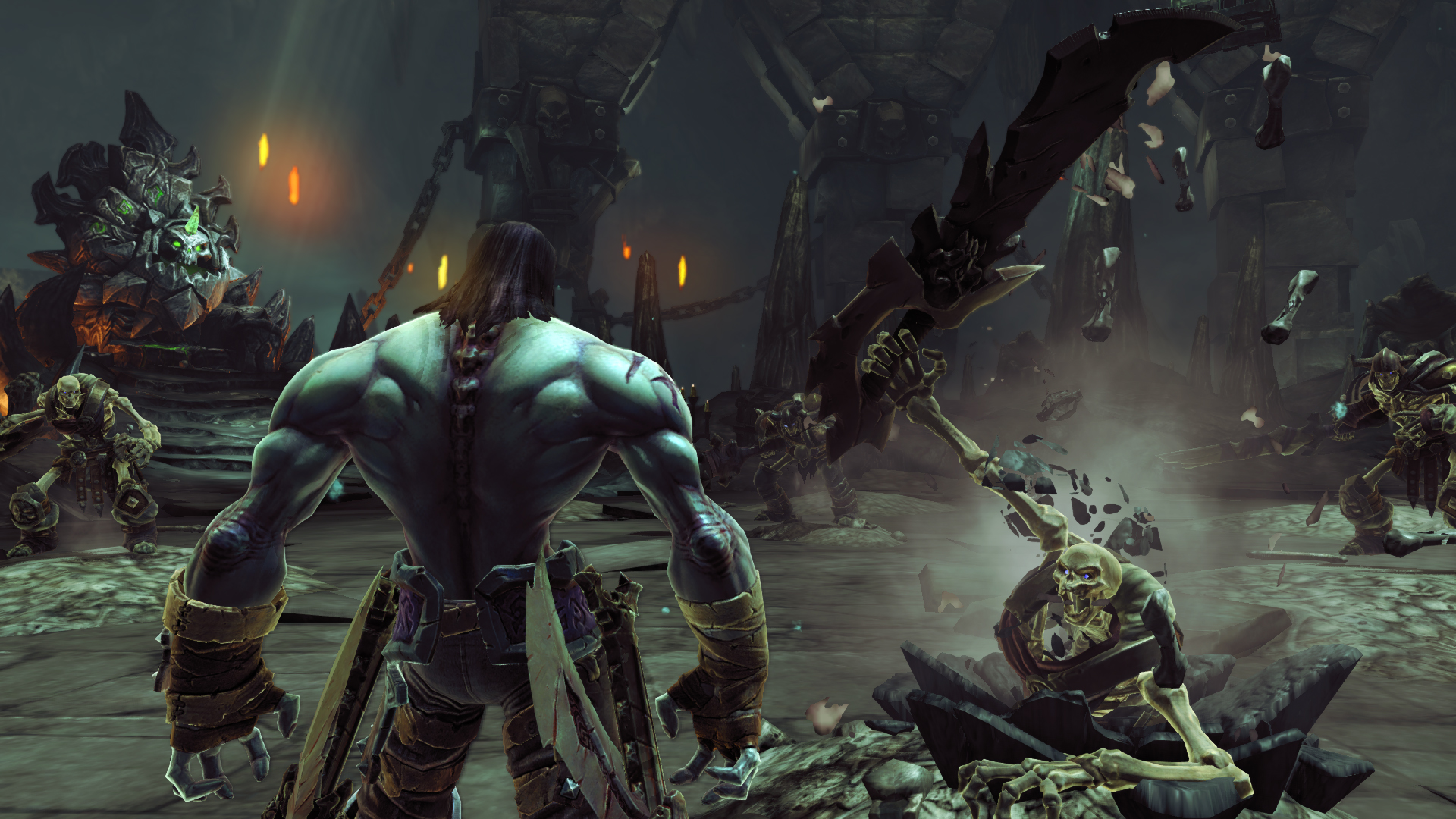 THQ’s demise sent ripples through the industry, but few felt it as keenly as Vigil Games. They had just released Darksiders II, and things were looking up for the studio as they started work on Warhammer 40,000: Dark Millennium. And suddenly everything went pear shaped. A bidding war for the individual studios and their intellectual properties emerged as THQ began to fold. Zero bids were made for Vigil or its IP, much to everyone’s surprise. Crytek swooped in post-collapse and formed a new studio called Crytek USA, snapping up many ex-Vigil folks in the process. Unfortunately, Vigil’s luck didn’t hold as Crytek’s own financial woes were visited upon the new crew. In early 2014, founder David Adams and 20 of his core team members left and founded their own studio — a chance to take control of their destiny once again. Hooking up with the owners of the Darksiders IP, Nordic Games, the first objective of the newly-formed Gunfire Games was plainly visible — Remastering Darksiders II. Could this re-introduction pave a path to continue the fantastic storyline, or is Darksiders II Deathinitive Edition just another bump on a very rough road for this team?

As with all remasters, the team started with the most observable change — the graphics engine. Moving from Xbox 360 and PlayStation 3 to Xbox One and PlayStation 4, the team rebuilt the rendering engine entirely. Adding dynamic shadows, physics-based upgrades, and higher resolution textures, the team pushed the resolution up to 1080p and locked the framerate at 30fps. In practice, it shows up mostly in the lighting arena. Skin textures look more natural (albeit stylized), metal and stone reflects light as you might expect, and it’s very clear that the entire game has been relit all while still retaining Joe Madureira’s distinctive art style. Despair’s signature soul-trail couldn’t look better.

Darksiders II – Before the upgrade. (click for large version)

All of this pretty comes at a price — it isn’t severe, but the framerate can wobble a bit under 30. It’s never enough to be impactful, but it also doesn’t seem to be triggered by an abundance of action on the screen. It could be the new rendering engine, which may allow the folks at Gunfire to patch it up in the future. Any way you slice it, a few dropped frames is a small price to pay for less screen tearing, better textures, and a native 1080p resolution.

Darksiders II – After the upgrade. (click for large version)

It sounds like such a minor thing, but Gunfire Games worked hard on the shadows in Darksiders II: Deathinitive Edition and it really shows. The shadows are dynamic, bending around the environment like they should, and matches the action on the screen perfectly. In a game of this topic having a convincing environment is necessary and they cast quite the spell. Where Darksiders had a very Unreal Tournament-inspired background, Darksiders II’s world is distinct and more befitting the subject matter.

The biggest changes are obviously cosmetic, but that isn’t to say that there aren’t a lot of adjustments under the hood. While Gunfire Games retooled the game graphically, they also adjusted loot tables, mission difficulty, and general balance of the game. There were two sections that really stuck out in the original game that were extremely frustrating — a platforming section and the fight with Bhethir. The controls have been tightened up and platforming seems much improved, which should lead to more gallons of blood spilled and less deaths — both of which are tracked in the menu system as did the original.

The loot in Darksiders II: Deathinitive Edition was tuned to be more appropriate for your current level, but more importantly the DLC items have been seamlessly folded into the game as well. Instead of being a very separate object or mission, they are now entirely integrated. This means you get the Maker Armor Set, The Abyssal Forge, The Demon Lord Belial, Death Rides, Angel of Death, Deadly Despair, Shadow of Death, Mortis Pack, Rusanov’s Axe, Van Der Schmash Hammer, Fletcher’s Crow Hammer, Mace Maximus and Argul’s Tomb in addition to the 24 hours or so of the main game, and at a price of $29.99 — this is a steal.

I mentioned it three years ago and it still holds true now and bears mentioning: Jesper Kyd put together an amazing soundtrack to match the voice acting talent here. Michael Wincott (Top Dollar in The Crow, Prophet in Halo 2), James Cosmo (Jeor Mormont in Game of Thrones, Campbell in Braveheart), Keith Szarabajka (Stephens in The Dark Knight, Cornelius Slate in Bioshock Infinite), Troy Baker and Fred Tatasciore (Everybody in everything, ever) are just the top of a very long list of incredible all-star cast.

Take a look. It’s in a book. It’s Reading Rainboooaaaahhhh what the hell is that?!

As I was reviewing this on the PlayStation 4, I was interested to see if Gunfire Games would utilize the special features of the DualShock 4. Unfortunately it is only used as a giant button to reach the options menu. Options is instead used to reach your inventory and skill menu. I was hoping to be able to sweep the map, set way points, draw a neigh from Despair when I summoned him, or even just a purple light coming from the front, but alas — nada. It’s a really minor nit, in the light of such a fantastic update.

Three years ago I ended my review for Darksiders II with “ See you soon (hopefully) for Darksiders III!”, and now I have the chance to say it again. Let’s make it happen, Nordic and Gunfire Games. You’ve whet our appetite, now bring on the next rider!

Might be worth a double dip -- it’s every bit as fun as you remember, and this version comes with all of the bells and whistles, as well as rebalanced combat, tighter controls, and better loot tables. There are some framerate hitches to go along with the graphical and lighting overhaul, and there isn’t a whole lot new here, but if you missed out the first time, don’t let this one pass you by.

Ron Burke is the Editor in Chief for Gaming Trend. Currently living in Fort Worth, Texas, Ron is an old-school gamer who enjoys CRPGs, action/adventure, platformers, music games, and has recently gotten into tabletop gaming. Ron is also a fourth degree black belt, with a Master's rank in Matsumura Seito Shōrin-ryū, Moo Duk Kwan Tang Soo Do, Universal Tang Soo Do Alliance, and International Tang Soo Do Federation. He also holds ranks in several other styles in his search to be a well-rounded fighter. Ron has been married to Gaming Trend Editor, Laura Burke, for 21 years. They have three dogs - Pazuzu (Irish Terrier), Atë, and Calliope (both Australian Kelpie/Pit Bull mixes).
Related Articles: Darksiders II: Deathinitive Edition
Share
Tweet
Share
Submit