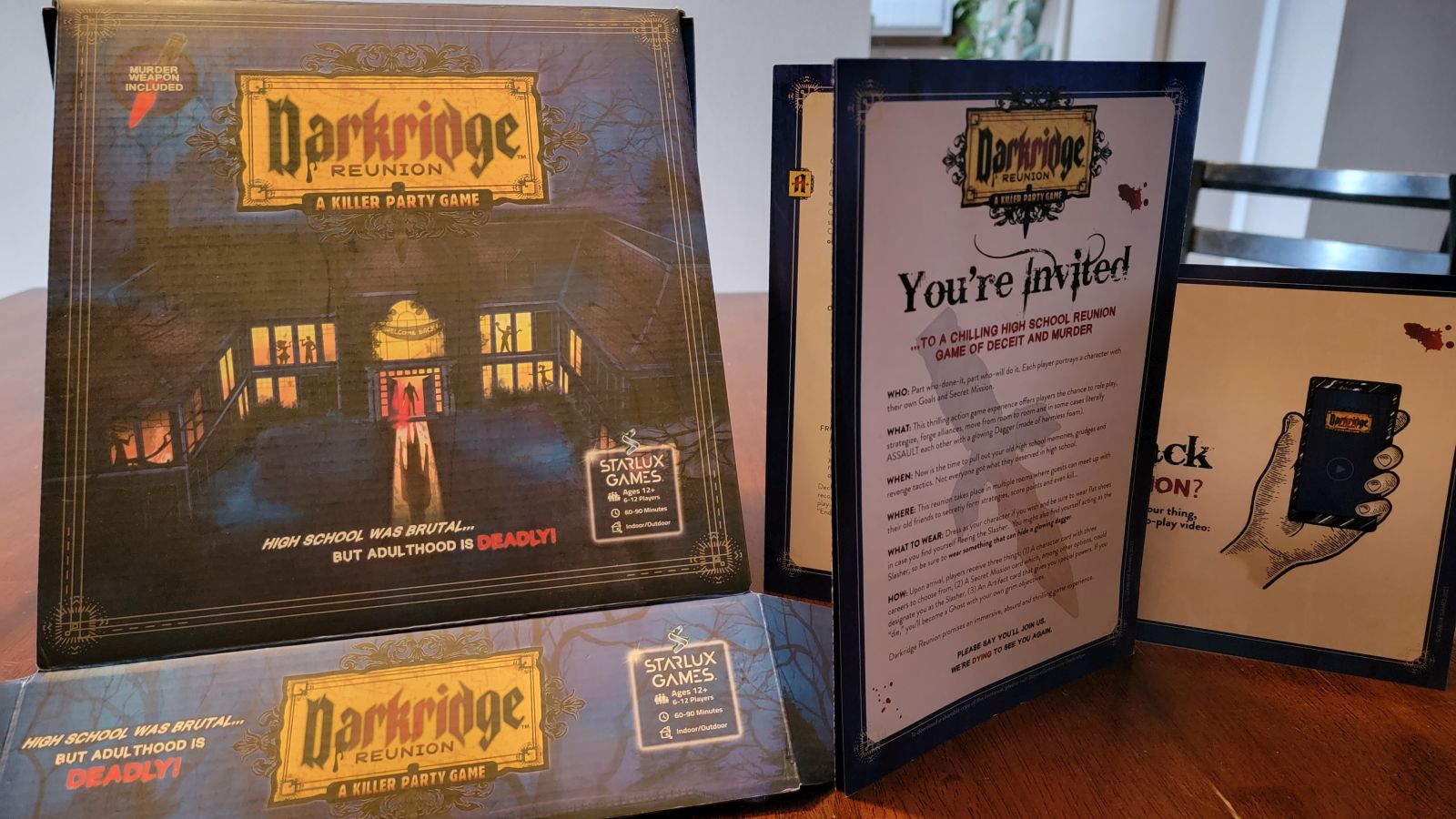 Highschool will always be a tough time for people. Myself included, which makes revisiting the high school you graduated from for a reunion kind of an odd experience. In my life I never found myself caring or wanting to go back to those halls as my life now is who I am as an adult and not who I was as a teen. Darkridge Reunion, however, takes the overall stigma of going to a high school reunion and reinvents the wheel, so to speak. Darkridge Reunion, made by Starlux Games, is a game for 6 to 12 players and provides a unique opportunity to revisit high school from the comfort of your home. In a game that clocks in around just an hour or so, Darkridge Reunion takes its reunion theme and adds a whodunnit aspect, while sprinkling in a little bit of Among Us.

As Darkridge Reunion hit my shelf after reading the rules and watching the rules video it became apparent that this was going to be a unique experience on its own. First and foremost being a 6 to 12 player game is hard enough already, especially since the pandemic hit and many are working to solidify their individual groups/people that they play games with. That being said, planning a get together around a holiday when friends would be over to barbeque and subsequently play a few rounds of Darkridge Reunion worked extremely well. 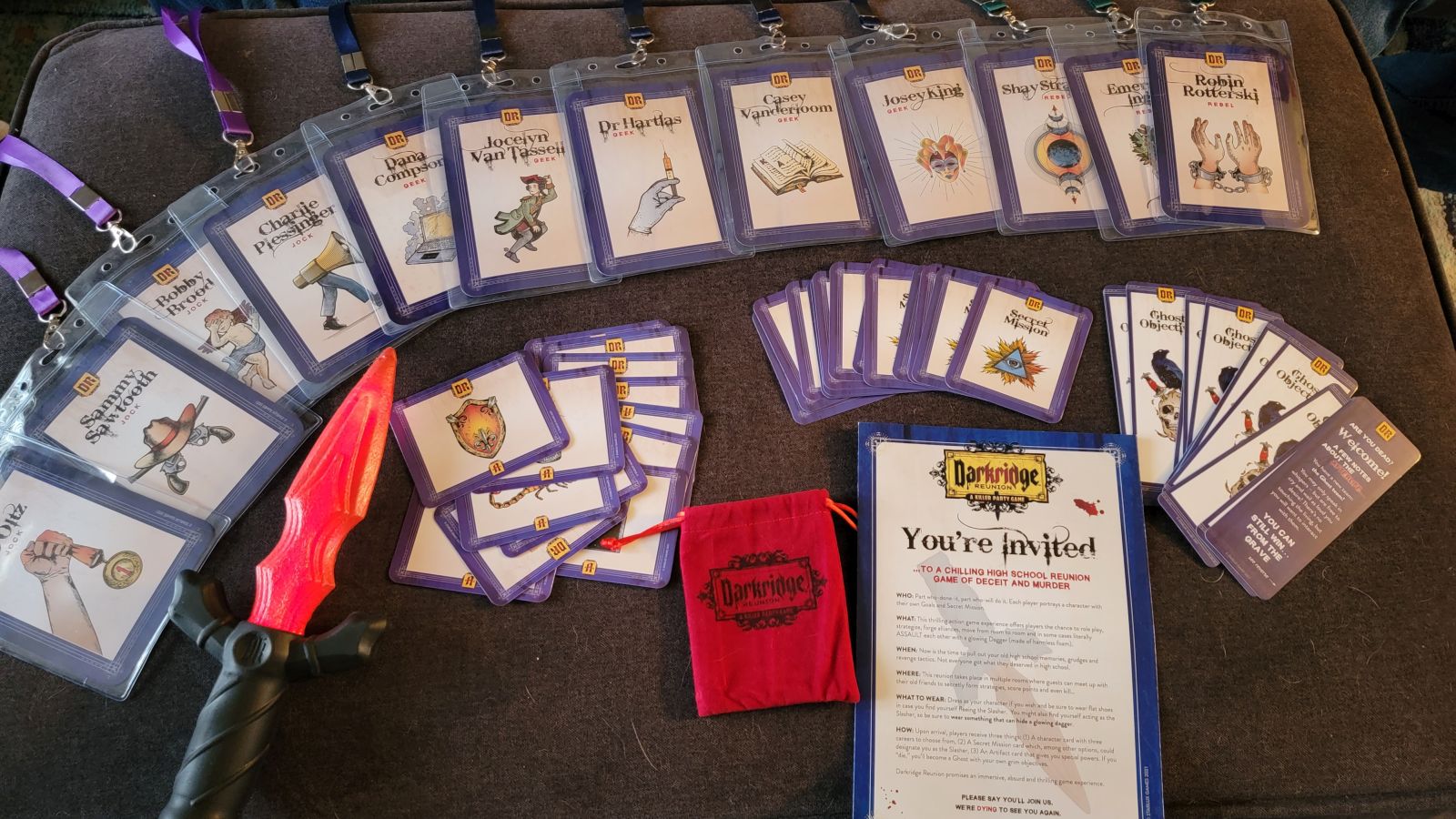 In a game of Darkridge Reunion players receive individual character roles that belong to different factions. These factions are: the geeks, the jocks, and the rebels. In advanced play there is also a ghost faction (playing without this faction is a huge mistake), however the ghosts do not get new role cards but act as echoes of their own deaths and have their own points and objectives to score. When players gather after the group is ready to play, each player is given a role randomly making up the party for the game. Once that happens players then exam their cards and who they were in highschool and who they are currently. With a few different options to choose from players have a myriad of ways to role play their current characters.

After choosing their character’s current persona, players receive secret mission cards. While everyone gets one, only one of these belongs to the person that will be the slasher, whose goal is to kill everyone, but what makes the game increasingly hard(not in a good way) is having to achieve all of your missions in private. While this might seem like a natural thing i.e. you would want to kill other players in private as being found out defeats the purpose of the game, what actually winds up happening is unless you have the perfect space/location for playing a game of Darkridge Reunion then chances are players will always be around other players and the so called privacy you need is missing as there is barely any one on one time. 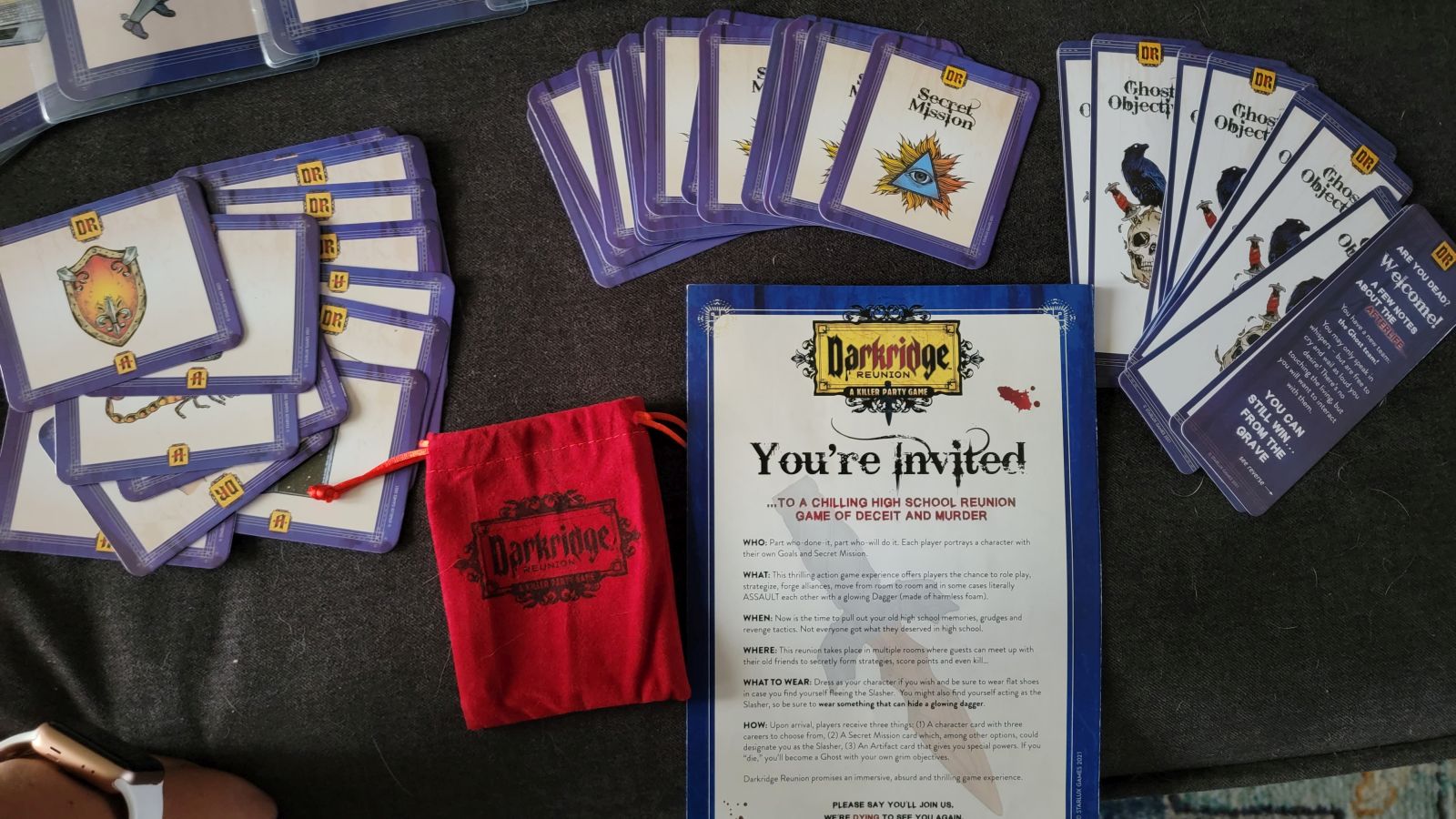 Then each player receives an artifact which is essentially a power they can use on other players, again in private(insert grumble noises here). When that is finished, the party decides how long to play the meet and greet round, and then after that round two, and if you wind up doing the “advanced” version of the game (everyone should always play the advanced variant) a third round. These are highly variable as some players need longer to establish who they are, or to accomplish missions, either way there is a sweet spot of time that the rule book seems to suggest is too long, and going too short means the game is over before anyone can accomplish anything.

Once play starts, however, players, myself included, seem to ease into roles with ease. Then as the game progresses players really get to become the roles they take on and role playing stands out at the forefront of this game. Once rounds end, a new one begins and players continue playing until the end of the last round. After the last round players compare the objectives they accomplished, whether it is a character objective or a secret mission, and, based on when and what they accomplished and how many times they accomplished goals, players receive points for their teams. After all teams have calculated their points players then have the chance to bet their points to figure out who the slasher is and gain more points. The trick here though is if players on the same team as the slasher, they are unable to wager points and ultimately have to stick with only the points the team has earned through play. Then after wagering and the slasher revealing his or herself then the team with the most points wins.

This is all well and fun, but as before organizing a group to play this was more of a chore than it was worth. It took too much to get people over and to play and if I did not have an extensive network of people around me then this might not have gotten played. Second, playing Darkridge requires such a perfect space to play in that the game really makes me want to play Among Us instead as people are more likely to play that from their own homes, and to be fair that game has maps and everything else designed into that Darkridge so badly wants built into itself. Third, part of the components included in the game was a light up foam dagger for the slasher to use on players. To use this, players needed to conceal it, somehow, brandish the weapon, and flick the light on to kill someone, in private no less, all without being seen and without anyone noticing they are carrying the dagger. 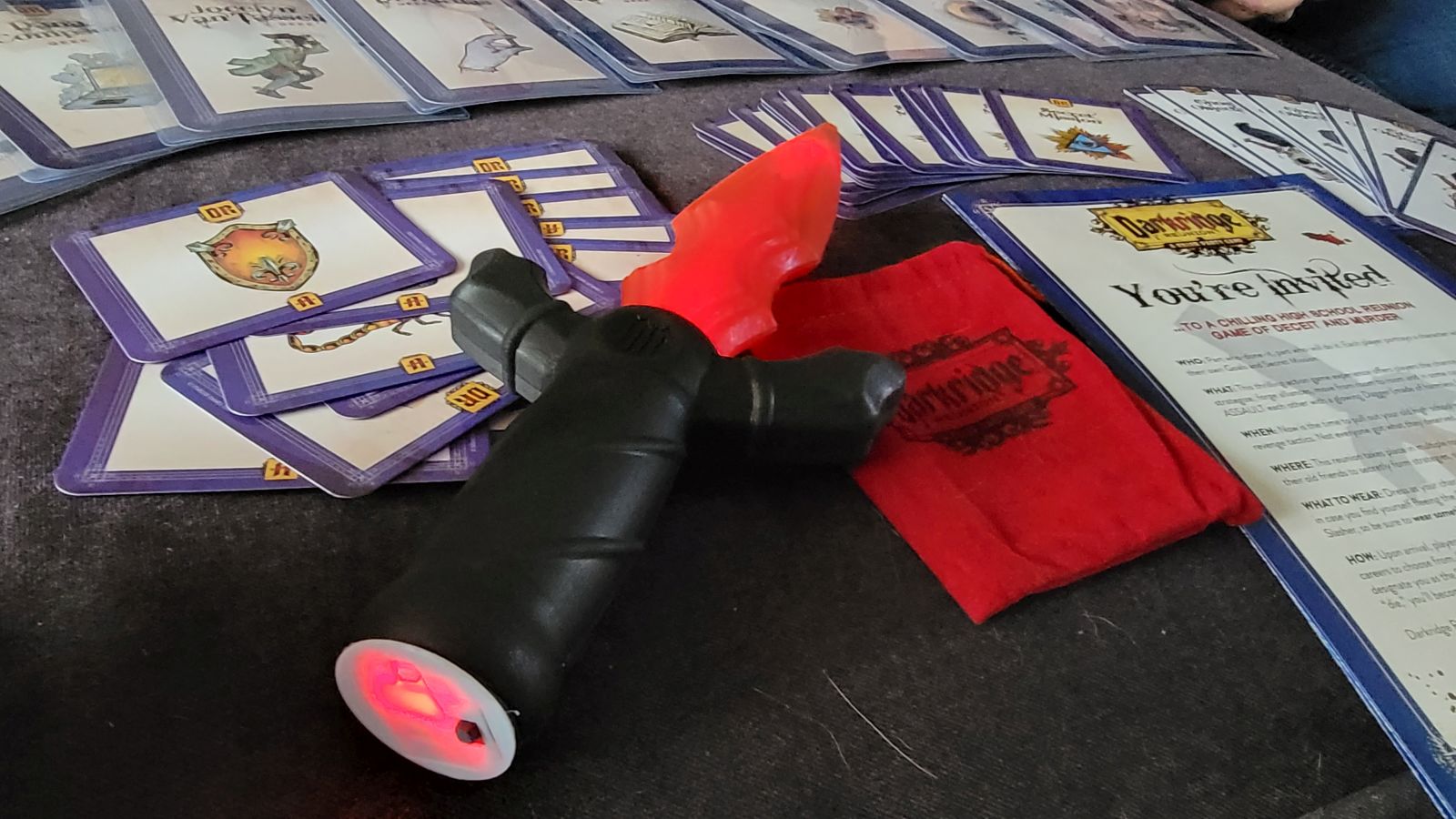 The rulebook in this instance suggested players dress differently to play said game, but again more work to play a game, rather than just show up or figure out some other solution to the carrying the dagger issue. Lastly the rulebook needs a little more clarity as there were times that rules were in a bit of a gray area and having to house rule something took a bit of the fun away from the true spirit of the game.

I can say whole heartedly that I laughed crazy hard while playing Darkridge Reunion. The components were and still are very awesome. From the foam dagger that lights up, to the plastic badge/lanyards for every player to the decidedly nice quality of cards, lest we not forget a foam insert that keeps all of this together. Lastly, getting to roleplay characters that in a million years I would and could never dream of being or have been in high school has been a good amount of fun and keeps things interesting as people often find players doing the unexpected while playing this game.

At the end of the day there is a fun experience to be had here, but at what expense is the question that I keep asking myself. Between too much planning and effort just to play a game, too perfect a scenario required to play a game, or just at bare minimum reaching player counts to play the game, Darkridge Reunion is one game that wants to be the next big thing between board games and party games, but unfortunately it finds itself as its own next victim.