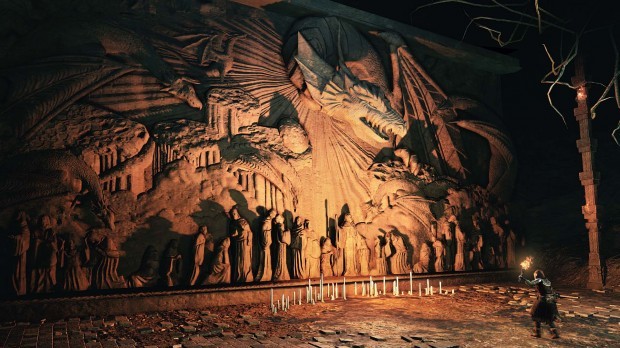 “Legend has it that in the deepest reaches of the Black Gulch, behind a door locked from the inside, is a magnificent city built for a great sleeping dragon.” This was part of the description that I was given for a peculiar dragon talon that would open a door to Shulva, the first area of the Crown of the Sunken King DLC for Dark Souls 2. The Crown of the Sunken King is the first of a trilogy of planned DLC for the beloved series that is best known for providing a deep challenge to hardcore gamers, and I am happy to report that the trilogy is off to a strong start in renewing that challenge.

The adventure begins in Black Gulch, a particularly nasty area that is part of the core Dark Souls 2 campaign, filled with poisonous monsters and lacking well-lit areas. In the Crown of the Sunken King, players are transported from the Black Gulch to a new area that features cities, tombs, and lakes every bit as treacherous as one might expect from a Dark Souls game. The new areas feel like an expansion upon the Black Gulch area that it branches off from, with many of the same deadly elements present–including an endless horde of poisonous enemies.

Probably the most important thing to know about Crown of the Sunken King is that this DLC is really hard, even for the Dark Souls series–and that’s saying something. Just about every enemy carries a poison weapon, the boss fights are some of the most challenging in the game, and insects climb up walls to spit corrosive mist into the player’s face to break your weapons and armor. Enemies also typically outnumber the player by a multiple of four or five, which meant that I spent a lot of my playthrough just running away. Players will have to bring plenty of healing/curing items and be prepared to change strategies on the fly if they ever hope to successfully navigate the depths of Drangleic.

One of the most interesting new elements that Crown of the Sunken King brings to the table in the introduction of light puzzle elements. Dozens of pillars cause platforms to raise and lower, which complicates the process of navigating the city. Sometimes lowering a platform at the right time will cause a group of enemies to be crushed, while other times it will cause a platform carrying even more enemies to appear, making you wish that you would have left it well enough alone.

Another interesting new puzzle comes in the form of enemies that can harm you as ghosts, but cannot be harmed unless you destroy their physical bodies, which lies hidden somewhere in the tomb. Even the strongest players will have no choice but to turn tail and run until they can destroy the enemy’s armor and fight back–and the armor isn’t easy to find, by the way. While this puzzle (and the previous one I mentioned) aren’t particularly complicated, this is an entirely new element that they’ve introduced, and it helps freshen up the Dark Souls experience.

The best part of Crown of the Sunken King, however is the boss fights, which are some of the most unique and challenging in the game. I won’t spoil anything for players, save to say that if you were disappointed with the lack of variety in bosses in the core Dark Souls 2 game, this DLC largely corrects that mistake with some new and interesting enemies (and did I mention challenging as hell?)

The Crown of the Sunken King adds some new armor, weapons, usable items, and a few dastardly enemies, but the amount it adds in this regard pale in comparison to the new areas and boss fights, which are the real strength of this DLC. Still, I would have liked more new items and equipment from the DLC, because it’s easy to complete the adventure and think “Wait, what did my character actually gain from doing all that?” before continuing with the core campaign.

Crown of the Sunken King also sometimes appears to have the difficulty seems artificially increased by giving enemies more health and poise, and having them deal more damage. While I wouldn’t say that this is the primary way in which Crown of the Sunken King adds challenge, it is an element that repeatedly left me shouting “Oh, c’mon! BULLSHIT!” after each death.

The Crown of the Sunken King is a very promising start to a challenging trilogy. The added puzzles, tougher bosses, and unique environments make this DLC a must-have for any Dark Souls fans and a welcome addition to a game that already offers so many unique challenges. While there weren’t as many new items as I would have liked, and some of the added difficulty seemed like cheap shots, these issues don’t hold Crown of the Sunken King back from being one of the most enjoyable add-on experiences I’ve had in a long while.