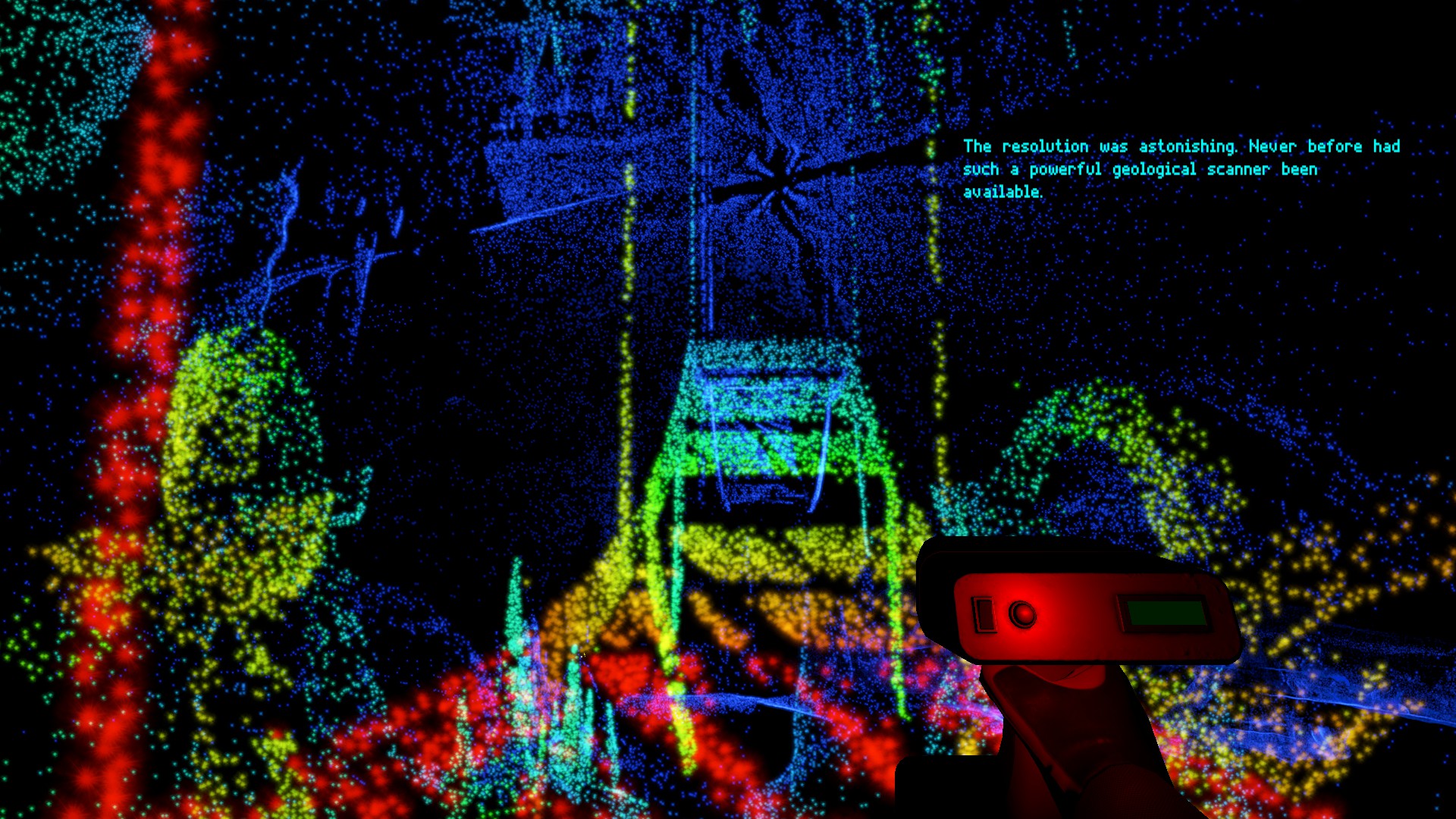 It’s dark. Very dark. You’re unable to see anything. Nearby, you spot a VR Headset and a LIDAR scanner. With these equipped, your world has become much more… colorful. And you’re finally able to traverse the mysterious caves around you.

Scanner Sombre, developed by Introversion Software (the masters behind Prison Architect), is a first person exploration game where you use a LIDAR scanner to survey and navigate caves. As you scan the area, walls and objects light up to show you how close you are to that object. The gameplay concept is simple, if the object is red, it’s close to you, if it’s blue, it’s far away.

That’s almost all there is to the gameplay. You walk ahead, scan and figure out where not to step based on what doesn’t appear. As you’re traversing the caves, your character will occasionally give you bits of the narrative that adds to the mystery.

The tone of the game is definitely somber, as its title suggests. The caves are silent, save for the occasional drips and echoes, and your biggest obstacle is falling to your death. Near the beginning, there is a segment of several bridges overlapping each other with planks missing. You figure out that there are planks missing by completely scanning the bridge and inferring that if something didn’t scan, it doesn’t exist. Of course, I knew I had to get across the bridge somehow, so I jumped over the gap… and to my doom with an unsettling bone crunching sound.

When Scanner Sombre isn’t giving you a melancholic and isolated feeling, it’s giving off an unsettling vibe. You’ll occasionally hear sounds from the cave that sound less natural or more dangerous. The common fear of being alone becomes the fear of not being alone. This causes you to move forward on its linear path quicker, hoping for a faster way to scan surrounding objects.

Thankfully, the game does provide you with upgrades as you progress, including a map, the option to adjust the aperture of your laser (faster and narrow scanning, or slower, but wider scanning?) and a blast option to scan a large field of objects quickly (this was the most useful tool, even if it took a little while to recharge). But even with these helpful upgrades, I still found myself frequently confused on how to progress. It felt like moving forward was the only puzzle this game had to offer.

Due to all of your surroundings being represented by beams of light, it’s difficult to get a feel for where you are in a room except for looking at specific shapes of things. Often, I would search for a dark path and go that way, knowing I must not have been there if it hasn’t been scanned yet.

Despite movement flaws, having the entire game represented by these beams of light is an interesting design choice. Instead of being presented with your typical cave and lake sceneries, you’re almost asked to imagine what everything looks like. What pulls you out of this is your own hand, as it and the LIDAR scanner are the only “real-looking” objects you encounter. You’re supposed to be wearing a VR headset, so this makes your own scanner feel extremely out of place in the world in front of you.

While using a minimalist approach, this game has plenty of beautiful moments. There are scenes where you’re scanning forward on a path and can only take in the cave around you, imagining how beautiful it must look when illuminated. If you look behind you, you can see your path, a trail of blue lights leading to where you are now. In a way, this is a satisfying experience to give you a sense of how far you progressed. Unfortunately, there isn’t a lot of progressing to do.

Scanner Sombre can be completed in just three hours, but it does offer a New Game+ mode. Playing a second time allows you to uncover secrets you weren’t able to uncover the first time around, thanks to the ability to keep your upgrades. But even with this ability, the game feels fairly short.

Despite your character wearing a virtual reality headset the entire game, Scanner Sombre does not support VR. At times, it feels like VR was planned, but was ultimately not implimented. It’s unsure whether it will be implemented in the future, but this game would have been good for it.

If you’re looking for a quick, eerily beautiful distraction with a unique twist on the first-person adventure genre, Scanner Sombre would be good for you. Over time, scanning feels like second nature, but all of the puzzles feel too similar. Fortunately, Introversion Software isn’t asking too much for the game at $11.99.

Scanner Sombre is a quick, beautiful and melancholic distraction with an interesting twist, but its main puzzle is navigating the caves, which can become confusing and frustrating due to everything being made of the same beams of light.

Sean Anthony likes to combine two of his passions: gaming and writing. Gaming has been a huge part of his life ever since he played his first game as a child, Kirby's Adventure. He aspires to have his name attached to an article that makes the whole world go, "Huh, that's neat, I guess."
Related Articles: Scanner Sombre
Share
Tweet
Share
Submit