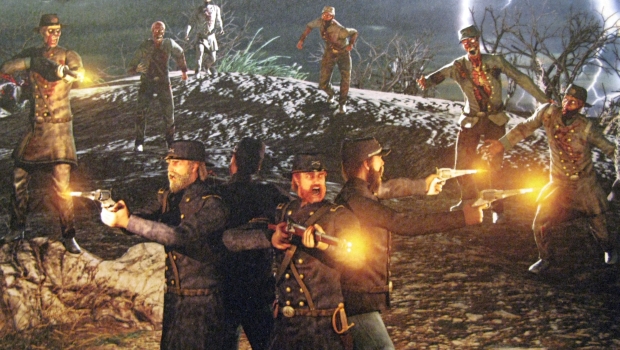 You’re reading this review for one of three reasons: 1) You like zombie games and want to see what this affordable entry in the genre is all about. 2) You’ve played or heard good things about other offerings by Victory Point Games. 3) My generous rating for this game attracted your attention like Michael Bay to crappy movie scripts.

Having recently played and reviewed VPG’s Mound Builders, I jumped at the chance to play The South Shall Rise Again. Victory Point Games consistently produces games that are fun and inexpensive, and appeal to hobbyists without alienating casual gamers. I was not disappointed by this release. What I find most attractive about these games is the inherent importance of decision-making and the risk-reward dynamics. TSSRA further employs a lightweight roleplaying mechanic, cleverly embedded in the gameplay.

The premise is that the Confederacy, compelled by a hatred for Yankees that survives even after Johnny Reb meets his maker, turns its reanimated dead against the Union. One to four players enlist as Union soldiers separated from their Company on the wrong side of the Mason-Dixon Line. All four characters start with a pistol loaded with 6 cartridges, a randomly selected rifle, unique skill, and heroic action. The random elements create role-playing potential. Generic pistols have a range of just two hexes, whereas the rifles are effective to six, eight, or ten hexes, but must be reloaded after every shot. Skills are “always on,” and affect dice rolls or grant special abilities, such as resist grapple, improved melee, or reload while moving. The heroic action can only be used once during the game, but has greater benefit to the player. One more card element is the Event Card, which occur when doubles are rolled and cause positive or negative consequences for the players.

Zombies come in three icky flavors: Zebs, Revenants, and Glorious Dead. Zebs are the most common, shamble just one hex each round, and can only attack when adjacent. Revenants have the same attack restriction but move two hexes. The Glorious Dead can practically run three hexes, but they also have enough functioning gray matter left to aim and fire a rifle, making them extremely dangerous. Player characters and the zombies take two hits to kill, with wounds causing movement and/or attack limitations. As with any undead horror game worth its salt, death by zombie means you eventually switch sides.

The map is a hex grid with static terrain: brush, fence, wall and road. With the exception of road hexes, terrain features hinder movement and line-of-sight. Strong tacticians will take advantage of obstacles, pinning Zebs on the other side of a fence or using brush to keep the Glorious Dead from acting like cheap artillery. The two-sided quick reference card has the attack matrices for both the Union and the Confederate undead, and it clearly lists the turn order and dice roll modifiers. Players must plan carefully in order to maximize results and minimize opportunities to take wounds. Each player can only do one action before the wave of zombies get their chance.

TSSRA encourages a cooperative style of play. The zombies are largely automated by the rules, and the game becomes increasingly difficult with the addition of more powerful zombies. The first time I played a solo game, my soldier killed two Zebs and a Revenant without too much trouble. Figuring the game was easy, I tried the highest suggested difficulty, with three Zebs, two Revenants and a Glorious Dead. I got munched and only took down the Revenants. Working as a team allows the players to use the zombies relentless nature to their advantage to complete scenario objectives.

For hobbyists, I recommend treating the scenarios as a complete campaign to be completed in order. Here’s where role-playing and character building elements come into effect. It’s even possible to have a GM role, the person who runs the zombies – following game rules – but also adding a storyline to flesh out the campaign. After each successful scenario, use the victory points chart as a type of currency to purchase new skills, heroic actions, and to upgrade rifles. Then, increase the level of difficulty with each scenario, filling the field with zombies by the end. One more house rule I recommend is to pull Event Cards on 7’s instead of doubles to increase frequency.

The South Shall Rise Again includes heavy cardboard components that are artistically well-executed and easy enough to manipulate for the thumb-fingered. Not all of the components fit like they should. The halo system doesn’t work at all because the halo cutouts are not wide enough to slip over the character pieces. This is frustrating, especially with a dozen or more zombies on the board to keep track of. The rulebook is appropriately paced and uncluttered, avoiding a major deficiency of Mound Builders, which was heavily over-written. I did find a few typos that a spell check would have caught, and the acronym “DRM” shows up before it is written out. Nevertheless, VPG’s technical writing has taken a significant step forward.

Victory Point Games’ latest entry in the Zombie Apocalypse genre effectively combines fast-paced tactical combat with the replayability of a lightweight RPG. As far as board games go, it feels more like a video game than anything else I’ve played. It is easy to learn, setup and play, and scales well for novice and advanced gamers. Just as importantly, it is a good value for the cost, and games can be won or lost in as little as twenty minutes.

Victory Point Games’ latest entry in the Zombie Apocalypse genre effectively combines fast-paced tactical combat with the replayability of a lightweight RPG. As far as board games go, it feels more like a video game than anything else I’ve played. It is easy to learn, setup and play, and scales well for novice and advanced gamers.