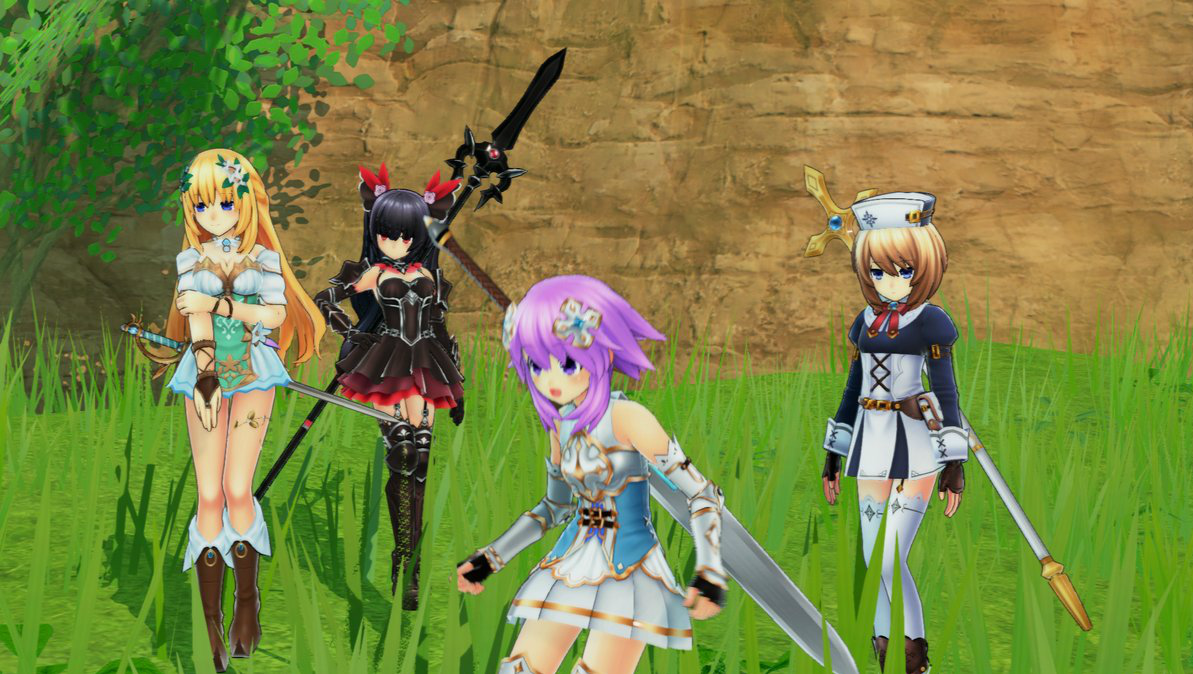 No matter what sub-dimensional world the action takes place in, Neptune and her friends are bound to be somewhere having an incredibly bubbly jaunt through wild locations, fighting and competing against one another in a constant struggle to see who can be the most popular goddess in all of the land. And I thought my job was tough!

If I get to enjoy the reprieve of some online gaming, it’s only fair that Neptune and her friends get the same time off, and in Cyberdimension Neptunia: 4 Goddesses Online, they get just that. Instead of being at one another’s throats, 4 Goddesses Online brings the characters together in unity and cooperation, and is a strangely spot-on “MM-Faux-RPG” experience that seems both fun and superfluous.

4 Goddesses Online is a large “online” world where Neptune and her friends are very basically just playing a video game. This game within a game experience is nothing new to the franchise, known for its tongue-in-cheek approach to the gaming industry. There is a demon king rising, and avoiding the peril of beta testers gone rogue and glitches in the system will determine if they can save this world or fail.

As a “MM-Faux-RPG”,  4 Goddesses Online is a strangely accurate representation. The game operates with parties of four, and your allies move independent of you, fulfilling specific roles such as healer, damage dealers, or a tank. Each world is set up in the MMO dungeon style, with long levels that have pockets of enemies throughout. Rather than a turn based style that you’d see with most Neptunia games, 4 Goddesses Online is fully active with hack-and-slash fighting and a 4 skill shortcut list that you can customize are you unlock new abilities for each character.

It’s not an entirely MMO-like experience, lacking in the bulk of activities and the deep difficulty of grinding that an MMO requires. Also, there aren’t any other players in general around with you, the definitive feature of a game like this. You’ll definitely never forget that you’re just playing a standard JRPG, but the game does a great job of capturing the outer cosmetic shell of a MMO. The grind is lighter, the general objectives are much more simplistic, and the experience is quick paced with lots of repetitive action.

I have a lot of issues with the way the striking works, as I find myself missing my target when it looks like I’m hitting dead center. The reach animation doesn’t seem to match the hitboxes very well, and unless what I’m seeing is some sort of inside joke way of expressing “lag”, it’s broken. If it is a joke, then it’s a terrible joke and the punchline is frustration. I have a little more success with the magic users, who can be controlled like a 360 degree projectile cannon with just the right amount of jumping and timing.

The abilities are very easy to use and effective, and you can change characters at any time, swapping party members and controlling different characters on the fly. This means you can play the game with whatever style suits you best, and set up abilities and characters for different situations based on their strengths. This also comes into play largely with an online mode, though not in the way that you’d think.

While not an MMO, the game does have an online mission mode that allows you to team up with up to 3 players to complete missions together. This is a bare bones mode in a lot of ways, but it is nice to have this option. You can play online as whatever character you prefer, and the parties will be varied in terms of effectiveness and style each time you run through a dungeon with others.

Past games in the Neptunia series have had some issues with the maps being incredibly basic and boring, but 4 Goddesses Online bucks that trend in a major way. The dungeons you explore are extensive, with varied levels and a excellent use of the terrain to be both visually and functionally a success. Much like a 3D platformer of the past, this game also uses alternative paths for hidden secrets and shortcuts that are hidden but can be found with a little creativity (and endless jumping around.)

The dungeons aren’t just functional, though. They are actually quite attractive, with bright and vibrant colors throughout, crisp and clean graphics and enemy and play sprites that are well animated and large. The style of Neptunia games has never been as clean and as shiny as in this release, and the light tone of the game is matched perfectly by the look and feel.

The worst thing about this game, though not entirely lacking, is that there is considerably less in terms of noticeable gaming industry “meta-commentary” that is so prevalent with other Neptunia releases. There are moments throughout, but for the most part this is the most straightforward and story-driven of any Neptunia release, and that makes it feel less like a Neptunia release than any other as well.

Cyberdimension Neptunia: 4 Goddesses Online is the MMO experience you’ve been dreaming of for Neptune and her friends, though it does come with a lot of shortcomings. The game does a novel job of producing a quick paced action JRPG that looks and feels incredibly like an MMORPG in almost every way, down to a “text chat” box. There are some issues with combat and that drags the experience down. Despite that, the game provides a fun and basic online mission mode, and provides a lot of fun and fast paced action in a pretty package.

Patrick Rost has been with Gaming Trend since 2013. At first focused on sports coverage, Patrick has gone on to cover a wide range of games and other products for the website. Outside of Gaming Trend, Patrick writes and records music, grinds perpetually in Elder Scrolls Online (PS4), and lives day to day with his two dogs, Bob and Stella.
Related Articles: Cyberdimension Neptunia: 4 Goddesses Online
Share
Tweet
Share
Submit