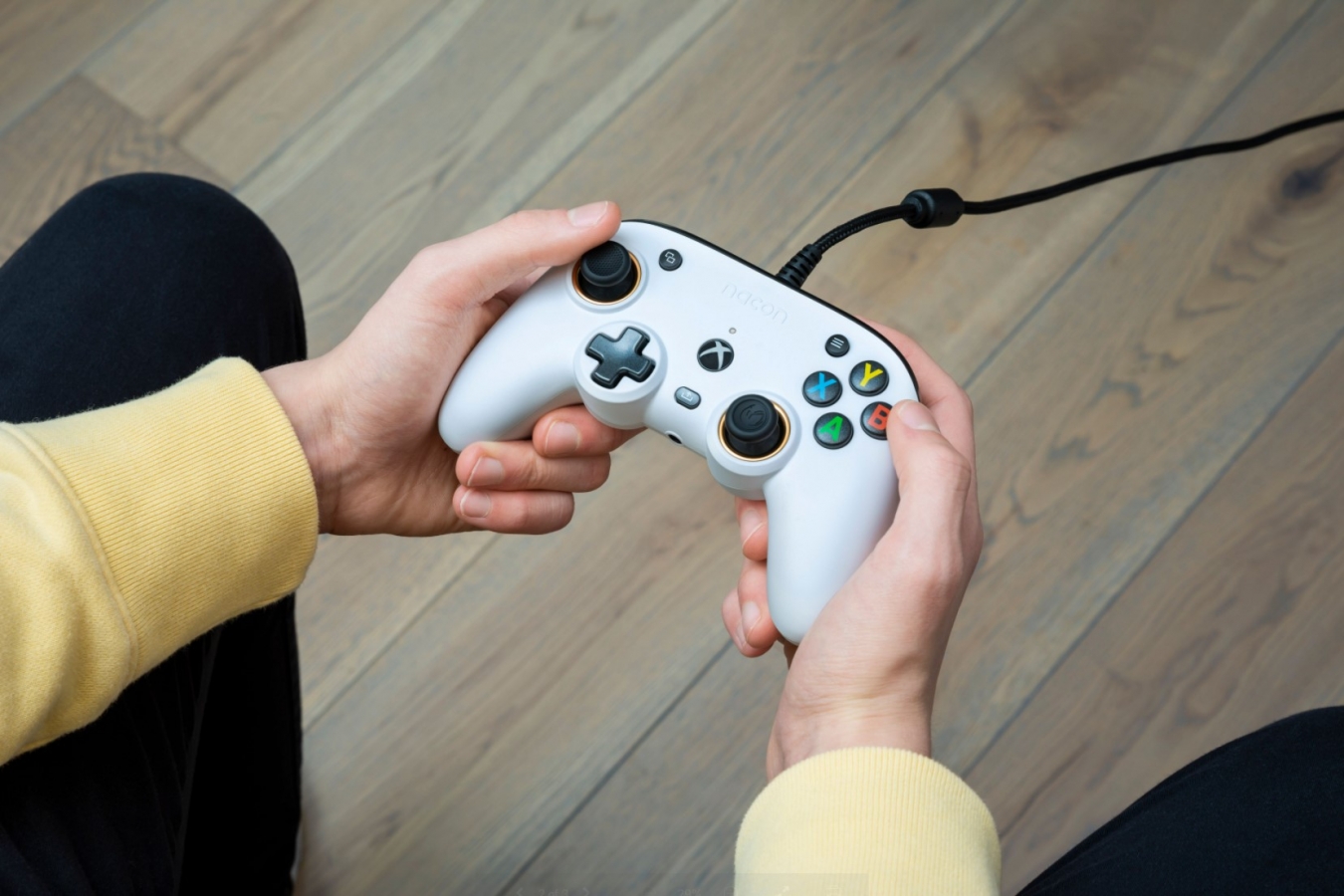 For the most part, we all have a controller we prefer. For some it’s PlayStation, some Xbox, some Nintendo. Some like the retro ones, like the Duke, or the infamous Dreamcast controllers. Even further, you may like a different configuration, like offset analog sticks or your cross button below rather than to the right. But something we all can agree on is that we want it to function, and function well regardless of what console or style it is, and this is where the Pro Compact controller by Nacon comes in.

Right out of the box it seems like it sits a level above your run of the mill cheap, off-brand controller, with a clean face filled with what you expect on an Xbox controller. It does feel much different however, flattened out and much wider than a standard controller with shorter handles. I can tell right off the bat this controller probably fits my smaller hands better than even the official one, but it counters that being a bit too wide and the analog sticks spread too far apart. It’s only just enough mind you, but it is noticeable. I do think this could work decently well for a child, but it’s not perfect. 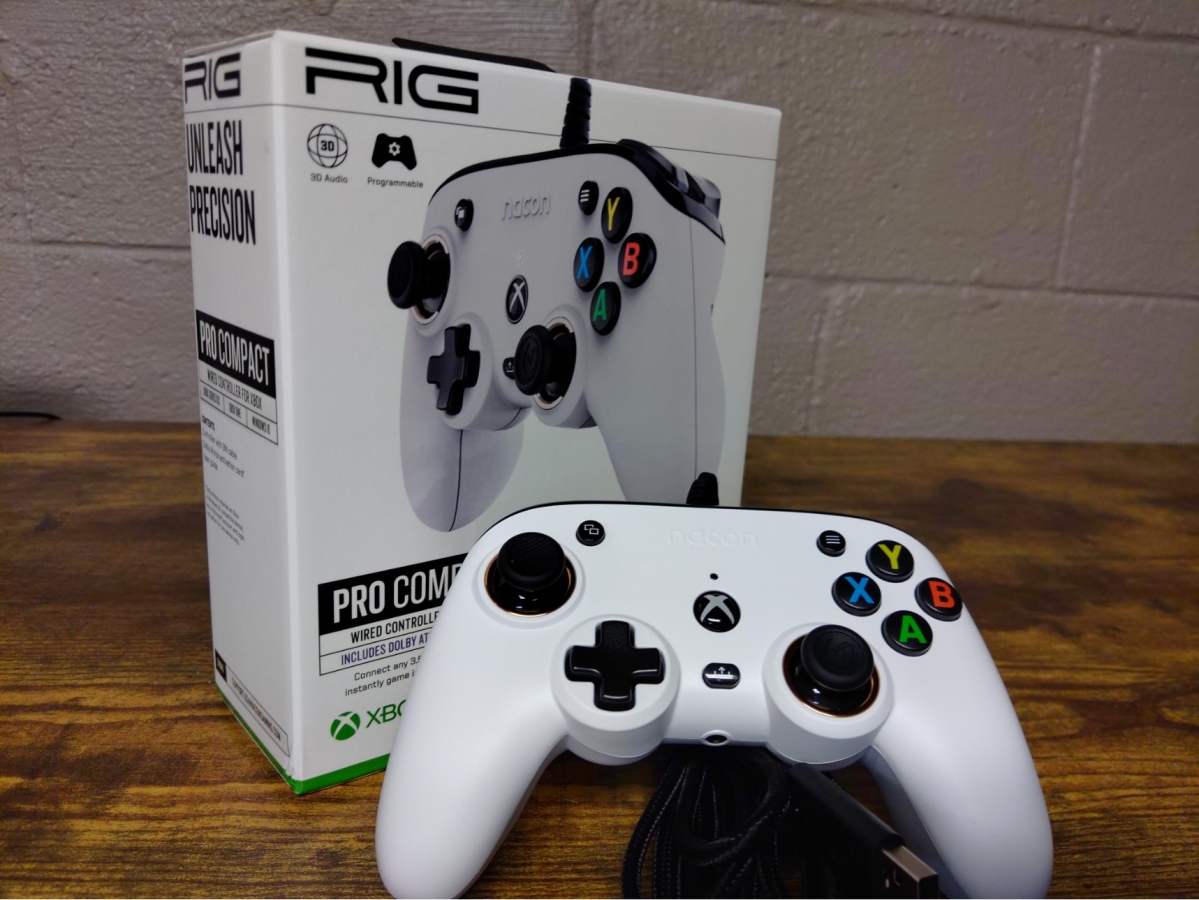 The face buttons make up for it though by being very large, and press in a crisp fashion. Moving onto the shoulder buttons and triggers, I found these to be right in the middle. They follow the sticks in feeling a bit too far apart, but the triggers are surprisingly adequate, more reminiscent of the PlayStation 4 or 5’s triggers than the Xbox’s. Another surprise, the Pro Compact features the share button found on the Series controllers, rounding it out as a fully detailed controller. My only real problem came with the directional buttons, as they don’t press very easily, which can be a detriment in the thick of battle.

Speaking of the thick of battle, the best way to test a controller is to put it right through the paces, and what better way to do that than playing a first-person shooter that requires precision? My game of choice is Call Of Duty, Black Ops Cold War specifically, and given I’m very competitive it is the perfect choice. Right away I could tell I was very spoiled owning an Xbox Elite Series 2 controller, with my aim jumping around the screen. While this felt like an issue at first, I soon realized it was only needing to adjust to the difference between these controllers. Within a match or two, I was able to adapt to the feel.

Besides the directional buttons, the rest of the Pro Compact is very responsive, and I didn’t slide or jump into situations often where my mechanics were hampered by the device I was holding. I hate to go with a phrase as simple as, “it just works”, but it really does. It does what it needs to do and isn’t the reason I’m dying in gunfights. It’s also decently comfortable for long play sessions, and though I’d argue the official controller is better at that, it’s a strong showing for an off-brand product. 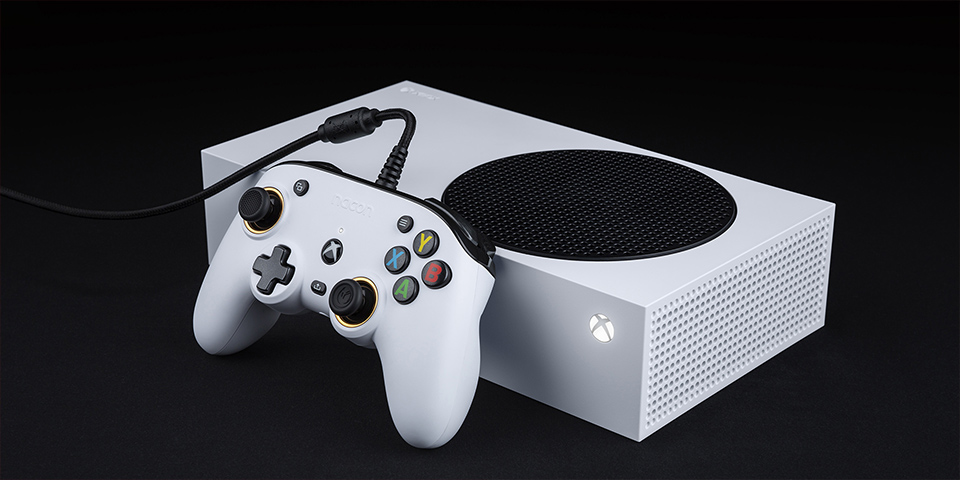 The Pro Compact is a wired controller, but that is to its benefit in my opinion. It has a braided cable, which keeps from getting tangled, and it comes in at nearly ten feet, long enough to reach most chairs or couches very easily. The only thing I don’t like? The cable is permanently attached, and while it ensures a stable connection, if it were to fray or be damaged you would have to replace the entire controller. There is a breakaway portion to ensure your dog running through doesn’t jerk your console or PC off the desk/TV stand, but that’s as far as removing the cable goes.

The good news is that the USB-A end is compatible with plenty of devices. You can plug it up to your Xbox One, Xbox Series console, or even a PC. The functionality is plug and play, the second it clicked into place my computer recognized it and had drivers ready in moments. Nacon does have drivers available on their website as well if you need them, so even without an internet connection you’re not locked out of using it there with due diligence.

Something else you can download, and arguably the best thing about the Pro Compact controller, is a customization program on the Microsoft and Xbox Store. This allows you to not only map out the buttons, but get into more advanced settings, such as stick and trigger sensitivity. They even have certain presets that may benefit you, such as fighting game and FPS sensitivity suggestions. As an FPS player, I love my Elite Series 2 controller because of the built in hardware options, but seeing some preferences available through software is a boon to me, especially if I was without my expensive controller. 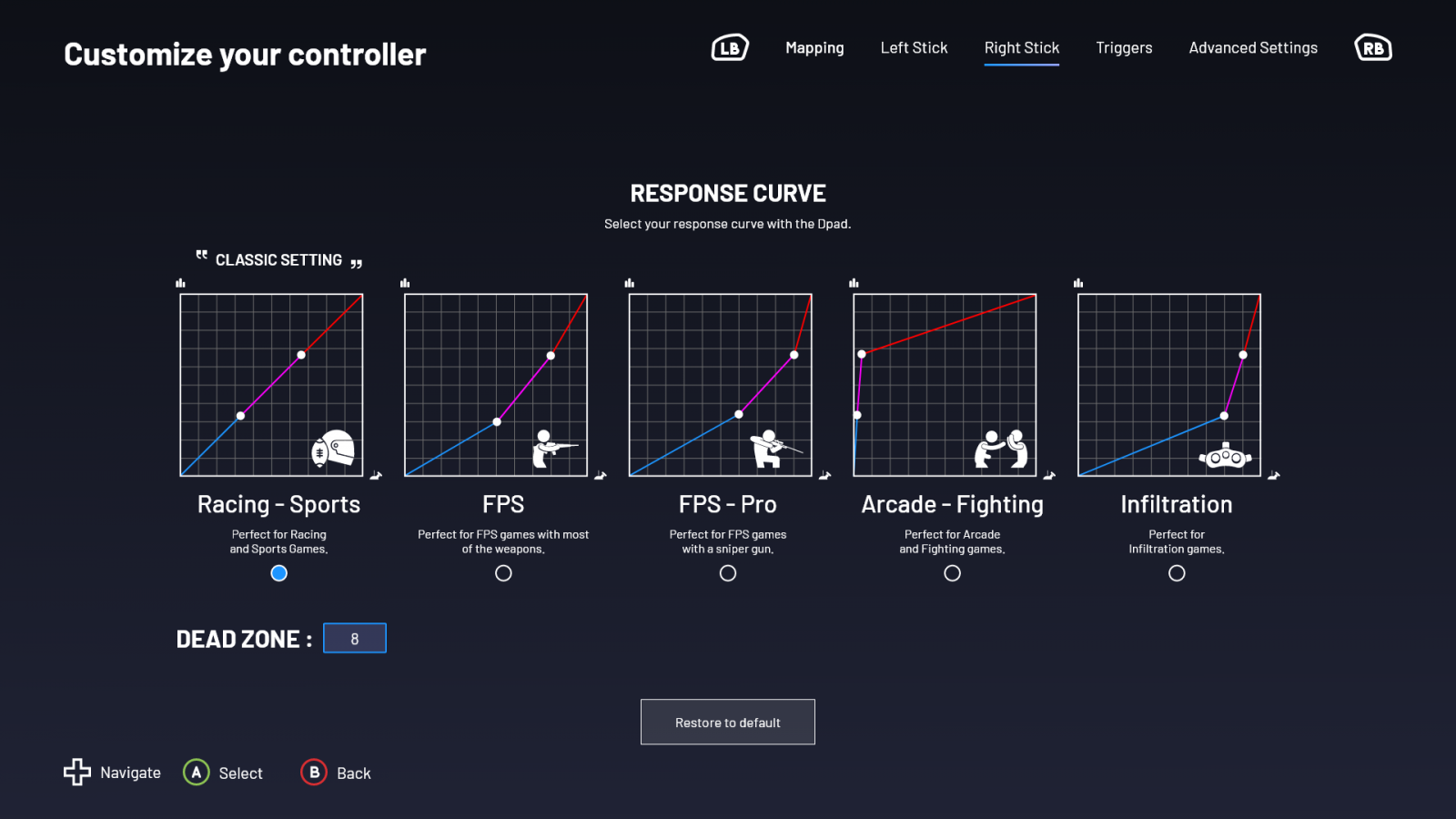 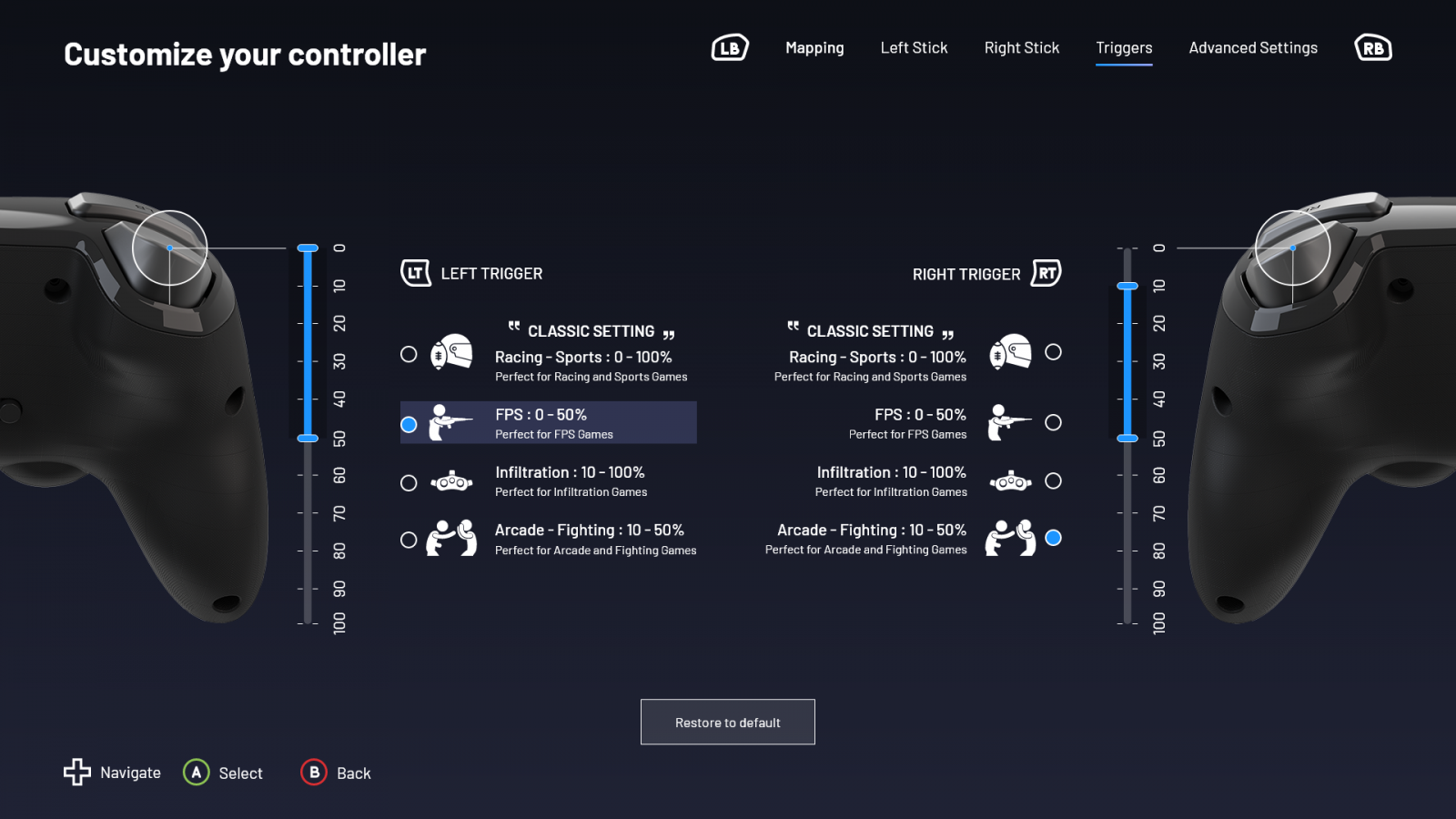 The word expensive is a funny one here, given where the Pro Compact falls. It’s not as bad as some, but it’s not cheap either. Clocking in at fifty bucks, it’s a bit much, more in terms of the official Xbox controller pricing of sixty dollars. I’ll say this, it offers much more than a cheap off-brand controller should, and doesn’t deserve to be as low as twenty dollars. But maybe forty? A ten dollar difference between an official wireless controller and a third party controller just doesn’t seem enough to convince customers to buy it over it’s first party counterpart.

The one thing that does redeem the price point to a degree is Dolby Atmos support via a code for a two year activation. I’m not sure any controller on the market offers this, and Dolby Atmos is a game changer with crisp 3D audio that enhances your gameplay. It’s as simple as downloading the Dolby Atmos app, redeeming the code from the box, and you’re good to go. Given the normal fee for Dolby Atmos is $15, that does make the price of the controller a bit easier to swallow, if you want to use it.

The Nacon Pro Compact controller does its job, and that’s what you’re buying it for. An argument could be made that it’s the best option to start your kids on, but even with compact in the name it’s a bit wide for that. I absolutely love the customization software, and that might be the leading reason to pick this one up, along with the Dolby Atmos support and subscription. I’m just not sure the price tag warrants buying it over an official Xbox controller, but it’s certainly a solid product.

David Burdette is a gamer/writer/content creator from TN and Lead Editor for Gaming Trend. He loves Playstation, Star Wars, Marvel, and many other fandoms. He also plays way too much Call Of Duty. You can chat with him on Twitter @SplitEnd89.
Related Articles: RIG PRO Compact
Share
Tweet
Share
Submit