It’s hard to believe that it’s been eight years since Animal Crossing: New Leaf first released in Japan. Eight years seems like a very long time between installments, but Animal Crossing fans have, almost universally, agreed that this was well worth the wait. New Horizons is loaded with a ton of innovations and more freedom than ever before, providing a delightful distraction when it seems like the world needs it most.

If you’re unfamiliar with the series and hoping this article will tell you if you will like it or not, I should warn you that I feel ill-equipped to do so. Animal Crossing is difficult to explain; it feels like the most casual farming simulator you’ve ever played, and yet it rapidly becomes anything but casual for most everyone. It’s like a zen garden filled with fruit, flowers, bugs, fish, and cute animal villagers who you can befriend… or hit with bug nets. Your choice. Made to be played for a year or more, it features a large space for you to customize and features to unlock, and overflows with seasonal events, friendly competitions, island getaways, and mortgage payments you can actually make. 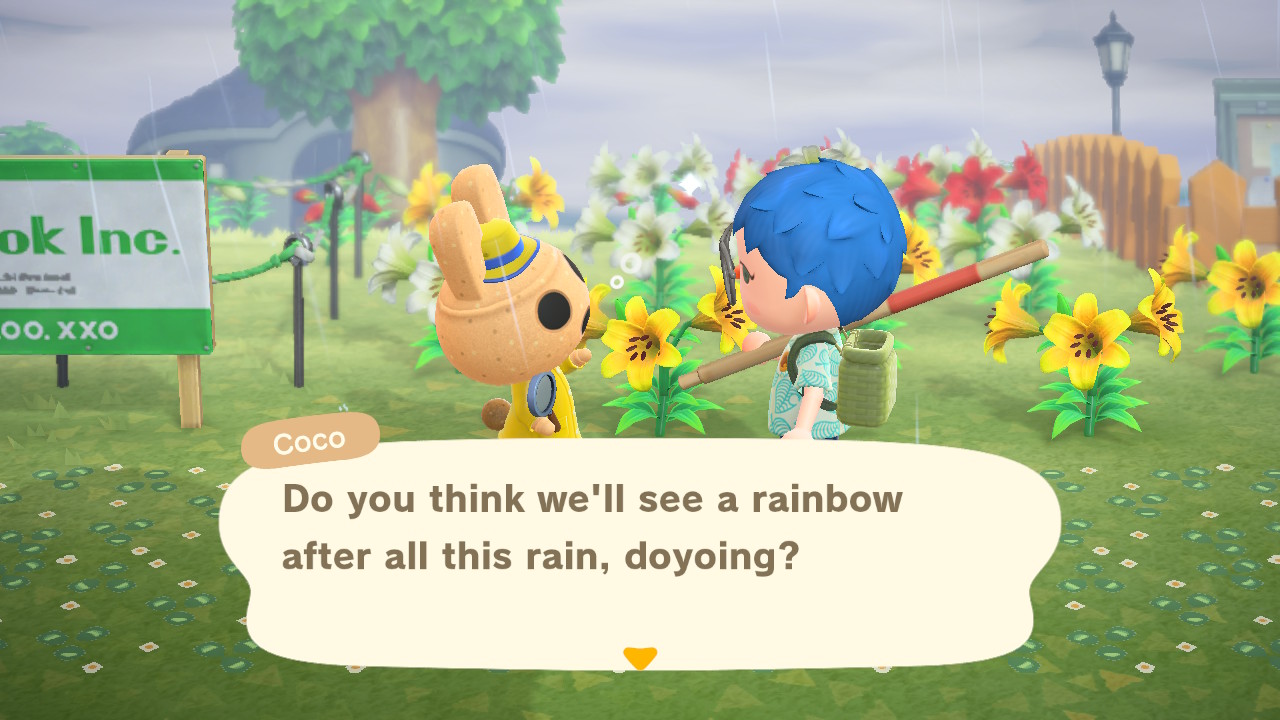 One of the biggest improvements to the series comes, unexpectedly, in the form of Nook Miles. This program, along with the upgraded Nook Miles +, rewards you for completing a variety of tasks, both big and small, allowing you to purchase DIY (or Do It Yourself) recipes, island upgrades and features, and even trips to other uninhabited islands. While this may seem like a gimmick at first glance, this feature has actually solved one of the biggest problems with Animal Crossing: what to do early in the game, or late at night, or whenever you’re just bored. It’s a simple yet elegant solution, especially for the early game, when time can really drag on, due to the limited number of unlocked features.

Crafting is another surprising new feature and helps change the pace of the game. Harvesting resources, collecting recipes from bottles on the beach, your villagers, and moments of inspiration add to the feeling of adventure and discovery as you build your own island paradise, and allows you to build up your collection without having to wait for new items to appear in the shop each morning. The community has remained as vibrant and helpful as ever, exchanging not only fruit, but flowers, furniture, clothing, recipes, and custom-made patterns, which can be worn as clothing, hung on walls,displayed as paths, and more. 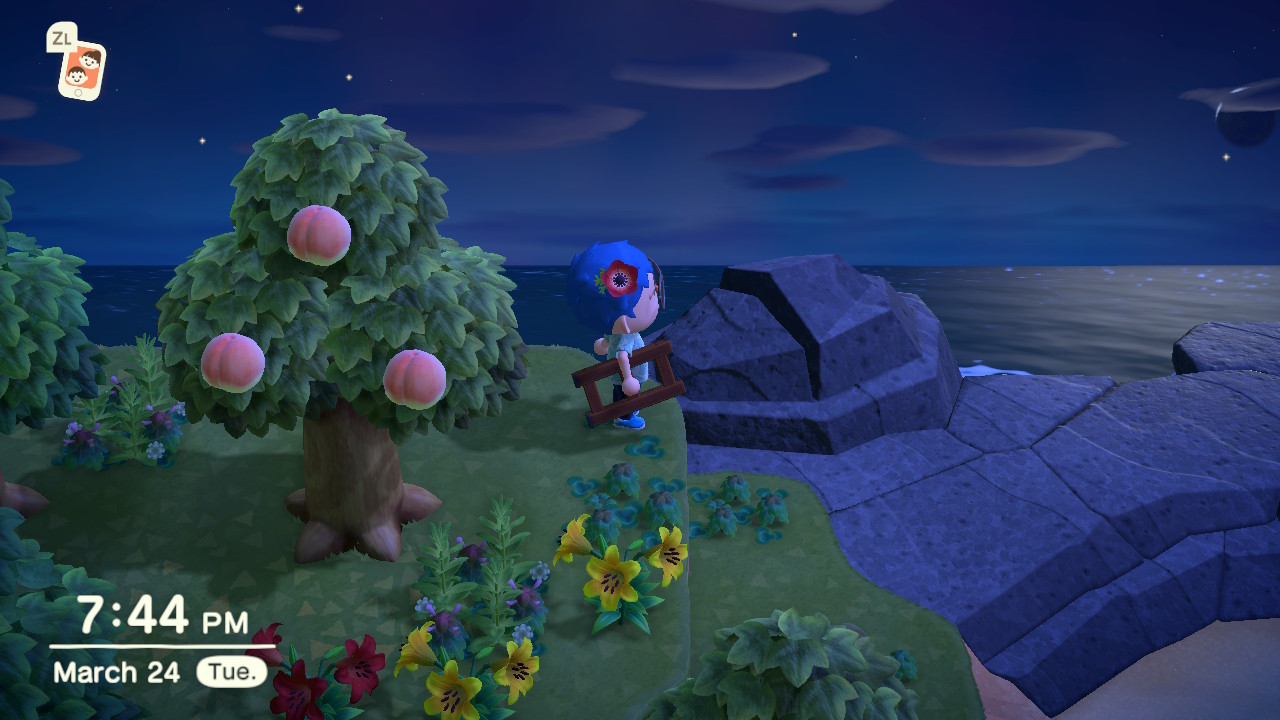 But before we get too in the weeds talking about all the details, I would be remiss if I did not take a moment to discuss how beautiful Animal Crossing: New Horizons is. It’s not understatement to say that this game is gorgeous. From the small details, such as the texture difference between players hair and the fuzzy, felt-like bodies of some villagers, the way raindrops ripple off the surface of the water, how tents cast ambient light on the grass beneath them, and the game’s often jazzy hourly themes, to the bigger ones. The golden glow of sunsets are breathtaking, and yet, much like in real life, just doesn’t capture as well on camera. The rustle of the trees on a windy day, the twinkle of shooting stars, and how they glow when you wish upon them. The way the rain slowly lessens, then dissipates with the water’s gradual changes, and how truly, teeth-gritting-ly terrifying tarantulas are all speak to the massive amounts of love, care, and time that went into designing this game.

One of the things I’ve been most impressed with is the pacing of the early game. I’m not new to the Animal Crossing series, and I know how to min/max my way through the first few days and mortgage payments. I was initially worried that I was powering through the game too quickly; within a few days I had already upgraded all my tools, my house, and built the island a shop. I was afraid I’d unlocked too much too quickly, and that I was very shortly going to find myself lacking in new and exciting features to unlock. I was very wrong. There is so much to unlock, upgrade, expand, and do that I managed to get countless dopamine hits early on and still have no shortage of goals to strive towards. I wasn’t even able to unlock hourly music, one of the trademarks of the franchise, until more than a week of playing. 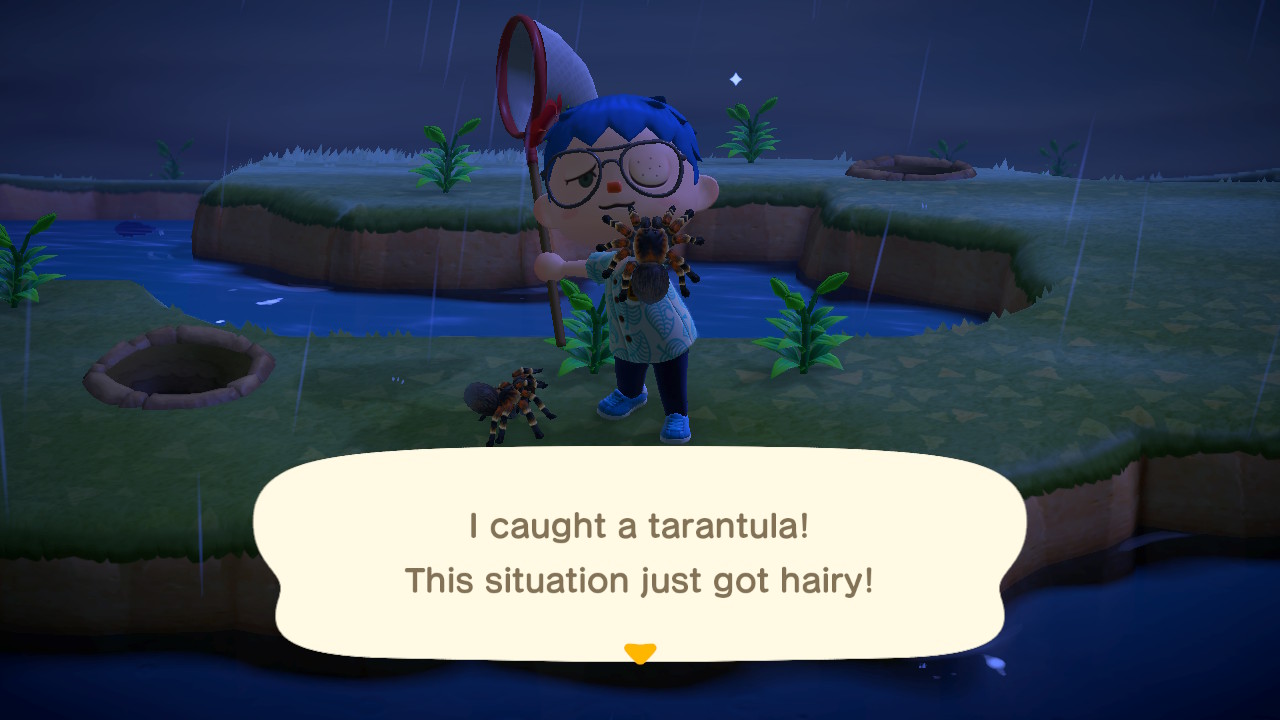 All of that said, there are still some things which could still use some improvement. Crafting can only be done one item at a time, a real pain when you want to craft 30 pieces of bait. (Pro tip, press A repeatedly while crafting, it will speed up the process.) You also have to transfer any crafting materials to your pockets; the game won’t pull from materials you have in your storage. This feels like a huge oversight, and one that I sincerely hope will be changed in a future update. Creation tools, while far more robust than before, would all benefit from touch screen controls as well as more abilities to preview and rotate.

Travel has taken a big step backwards since New Leaf. While the arriving and departing sequences are cute at first, they quickly become overly long, and can make playing, much less enjoying the game impossible if you have too many people coming and going around the same time. While some disruption is expected, the game really would benefit from a way to skip these scenes. 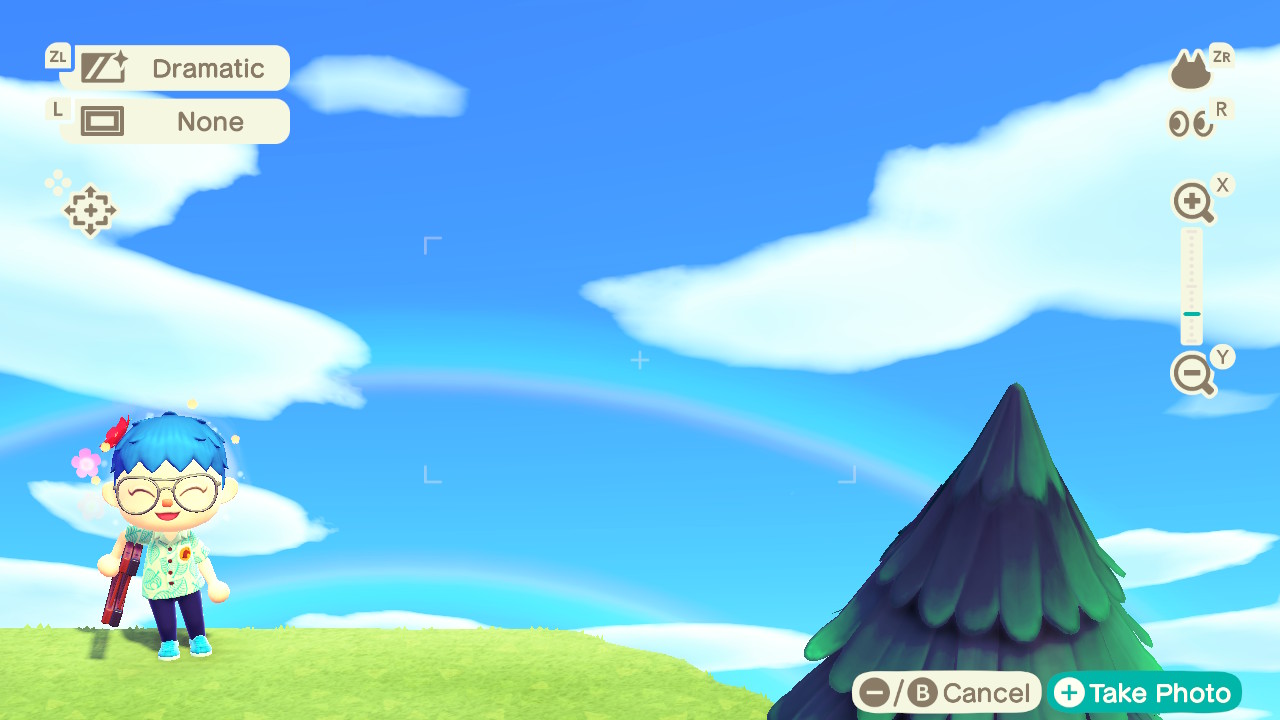 People who share their islands with family members also discovered one of the more annoying restrictions on the game: Whoever plays first will become the Resident Representative, and their progress will limit that of the entire island, and every other character. If you share your island, it doesn’t matter how much work you do, your ability to unlock upgraded tools, new villagers, shops, etc, will all depend upon how much or how little the Resident Representative has played. To make matters worse, you cannot transfer the title of Representative to another player, so the only way to take back control is to start the game over, erasing all data, characters, and progress. Also, why can’t we use the tool wheel while playing in local co-op?

Complaints aside, there are numerous quality of life upgrades which I appreciate on a daily, if not hourly, basis. The museum’s streamlined donation process, and visual upgrades, really makes the house of Blathers the early star of this game. You can now even tell right from your Nook Phone app if you’ve donated a specimen or not. The ability to decorate your island as you see fit, using both indoor furniture as well as specialty outdoor items, has already resulted in a burst of creative, colorful, and amazingly unique island designs. 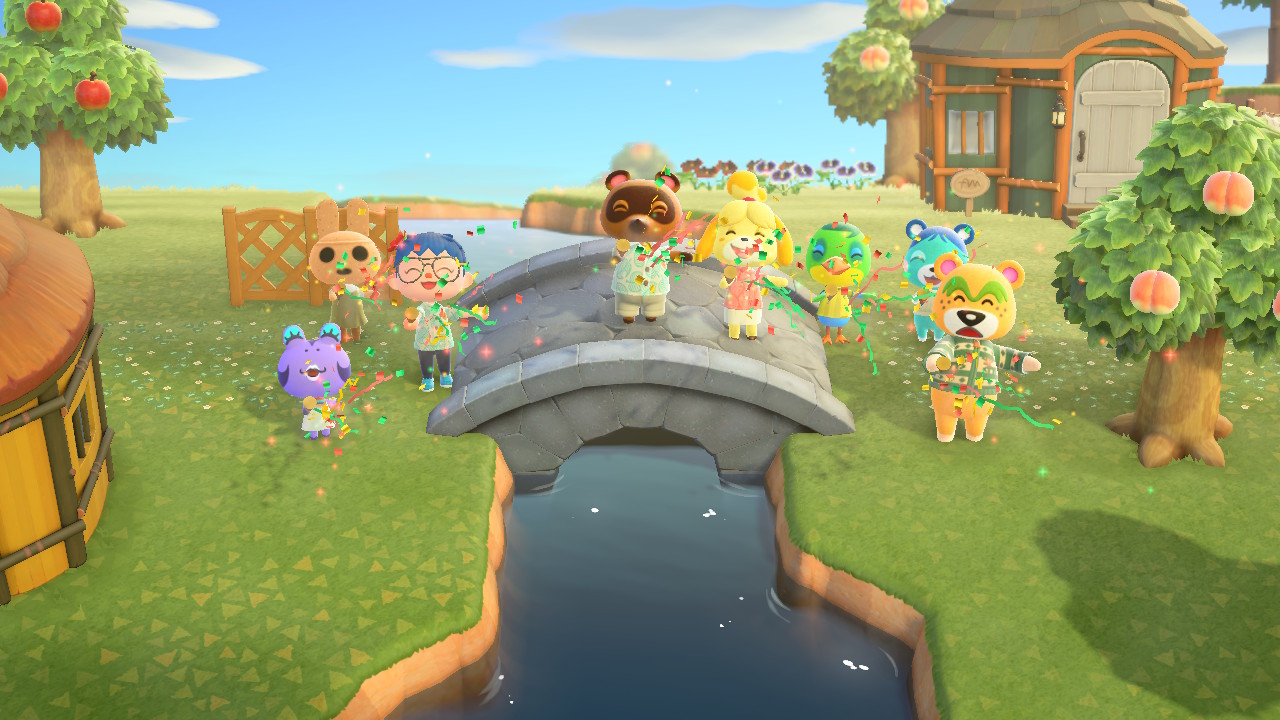 As addicting as the Animal Crossing series has always been, it’s quickly become even more engrossing, more absorbing, and more delightful than before. The team spent close to eight years creating New Horizons, and it shows. It’s a delight to play, a bright, colorful, relaxing world to lose yourself in. Regardless of if you seek to make rapid fortunes by hunting tarantulas and playing the stalk market, or enjoy lazy days by the beaches, reeling in fish and designing custom outfits, there really is no shortage of joy on this delightful little island.

Animal Crossing: New Horizons is easily the best Animal Crossing game to date. This life simulator is the most immersive, feature-filled, and customizable to date, having exponentially amplified all the charm and addicting qualities of New Leaf. A must have for any fan of the series, or anyone who simply needs a distraction from the current state of the real world.