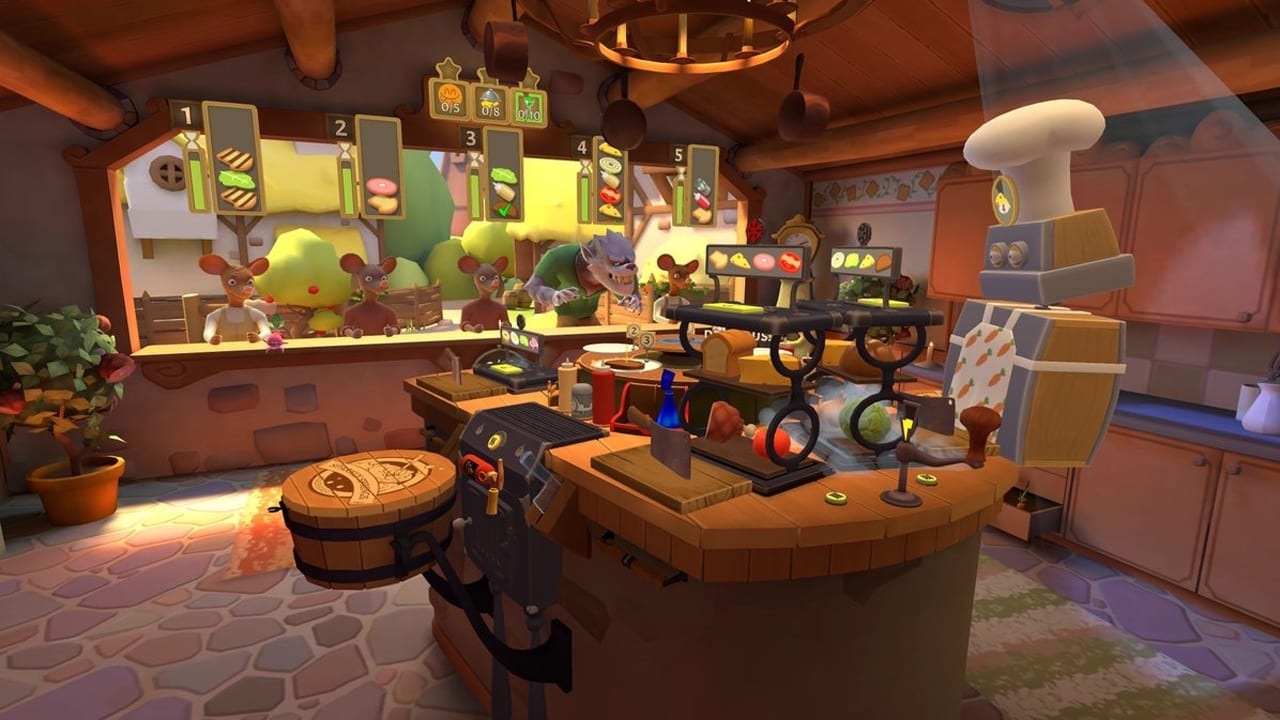 Virtual Reality embraces two genres extraordinarily well — horror, and the service industry. We are never as deeply immersed as when we are scared or flipping burgers and cleaning. Cook-Out: A Sandwich Tale jumps on the latter, letting players battle the likes of rye bread, mayo, and grilled pumpkin slices. It’s time to sharpen up your bread knife and get ready to make some gourmet sandwiches — those rats, cats, and werewolves aren’t gonna serve themselves.

Cook-Out: A Sandwich Tale comes to us from Revolution Games, the maker of games like Angry Birds VR and Acron: Attack of the Squirrels. In it we take on the role of sandwich artist in a fairytale world overflowing with whimsy. As all manner of fairytale creatures come to your shop to order sandwiches, you and up to three of your friends need to assemble them as fast as possible, earning gold for your efforts. It’s a simple concept that leads to some absolutely bonkers gameplay. Let’s break down sandwich making.

In early levels your task is easy — open your refrigerator and pull out one of four ingredients. Gripping your blade you’ll chop away at it until it’s the proper size. Playing with friends, each of them have unique ingredients to prepare, and the orders get more complex. You’ll all have some sort of bread (which you shouldn’t refrigerate in real life as it goes stale faster), a protein, and two assorted addons. Ham, cheese, onions, egg, mushrooms, and more are assigned to each of the four players, and that’s not even counting the ketchup, mayo, pepper, or grilled versions of each. There is a lot to juggle, and cooperation and communication is key. We teamed up with Dean Takahashi from VentureBeat and two of the developers to show just how nuts this can all get in this Let’s Play below. Embrace the chaos below:

As you can see, up to five woodland creatures will line up and ask for food, stacked in a specific order, and all done quickly. Mice are the most tolerant, and usually ask for the least amount of ingredients. Cats have no tolerance for botched stacking or food that isn’t properly aligned on the plate, so you’ll have to be more careful. Werewolves just want sandwiches stacked with every imaginable ingredient, so their food takes a long time to grind out. Rabbits are in a hurry, so you’ll need to crank out their food first. It’s a balancing act that requires that all players call out their food orders, just like in a real kitchen, and receive acknowledgement in return. You’ll hear us calling out “Need a slice of rye on 2”, “I’ve got the toast for 5” and other things to keep us all aligned and working the same order.

There is a sense of progression in Cook-Out as you slowly unlock other tasks. Eventually you’ll gain access to the grill, meaning that you’ll have to pay attention so as to not burn anything — a fire extinguisher is clipped to the side. Further down the road you’ll unlock the wash basin, having to scrub clean any plates that come back as customers won’t tolerate dirty dishes. It’s another element of coordination as somebody might have served everything they can, allowing them to scrub plates to keep the team on track.
As the levels get more frantic you’ll want to make use of potions. As you progress through the levels you’ll unlock potions that can sharpen your blade (you can cut the perfect slice in one swing of your knife), slow time for a brief period, transform a hastily-assembled sandwich from sloppy to perfect, instantly wash dishes, super-power the grill, and more. There’s even a tofu potion that lets you splash some on top of a sandwich stack to take the place of any otherwise difficult ingredient, or to beat the clock. You’ll earn these through the star rating on levels, or you can purchase them with the coins you collect at the end of each segment.

In the quest for the perfect sandwich, the team at Resolution Games have given us a tool that, frankly, has been missing from every VR food-slinging game I’ve played — the ability to remove and re-stack food once it has hit the plate. It takes precious time, so it’s better to do it right the first time, but sometimes a quick re-stack can be the difference between picking up another star on a level or missing it entirely.

Cook-Out: A Sandwich Tale can be played single player, but it ramps the difficulty dramatically. A robot assistant acts as a stand-in, providing much-needed reprieve as they provide ingredients that you don’t have in your fridge. You’ll have to periodically spin a winding arm to charge it back up, lest it fall asleep. What it does extraordinarily well is communicate what it’s doing. It’ll let you know that it’s making lettuce for plate 3, cheese for plate 5, or if it’s idling and out of moves. With the robot it’s possible to complete levels, but it’s very challenging to get two or three stars. Put simply, Cook-Out is built for playing with friends, so you’ll want to enlist some fellow sandwich artists.

I’m thankful to report that Cook-Out is a 100% nausea-free game. There are no sliders to adjust, but the limited movement keeps you well-grounded. A small handle lets you adjust the height of your surfaces, but beyond that there are no tweaks for performance or nausea needed or offered.

The currency you collect in Cook-Out is used for buying potions, but those coins won’t get you the collectibles in this game. All of them are cosmetic, but you can collect new knives, cutting boards, refrigerators, and more by doing well on specific levels. There are also goofy costumes like tricorn hats, Star Trek-like visors, all manner of costumes to unlock. It’s great to get a bit of personalization, even if it’s only for your friends to see.

Right now, Cook-Out: A Sandwich Tale is available on Oculus Quest and Oculus Rift S. That leaves Vive and Index users out in the cold. Since the game is played without much turning to the rear, and can even be played while seated, so there’s little reason it couldn’t be ported to the PSVR. The install base of VR users continues to grow, so here’s to hoping Resolution Games gives us ports to those versions, as well as cross-play functionality.

Four-player sandwich-making chaos reigns supreme in. Best played with friends, but mostly capable solo, Cook-Out: A Sandwich Tale delivers hours of cooperative chaos. Now we just have to hope that this VR culinary fantasy adventure can find its way onto other platforms so I can burn bread with my pals.

Ron Burke is the Editor in Chief for Gaming Trend. Currently living in Fort Worth, Texas, Ron is an old-school gamer who enjoys CRPGs, action/adventure, platformers, music games, and has recently gotten into tabletop gaming. Ron is also a fourth degree black belt, with a Master's rank in Matsumura Seito Shōrin-ryū, Moo Duk Kwan Tang Soo Do, Universal Tang Soo Do Alliance, and International Tang Soo Do Federation. He also holds ranks in several other styles in his search to be a well-rounded fighter. Ron has been married to Gaming Trend Editor, Laura Burke, for 21 years. They have three dogs - Pazuzu (Irish Terrier), Atë, and Calliope (both Australian Kelpie/Pit Bull mixes).
Related Articles: Cook-Out: A Sandwich Tale, Let's Play, VR
Share
Tweet
Share
Submit