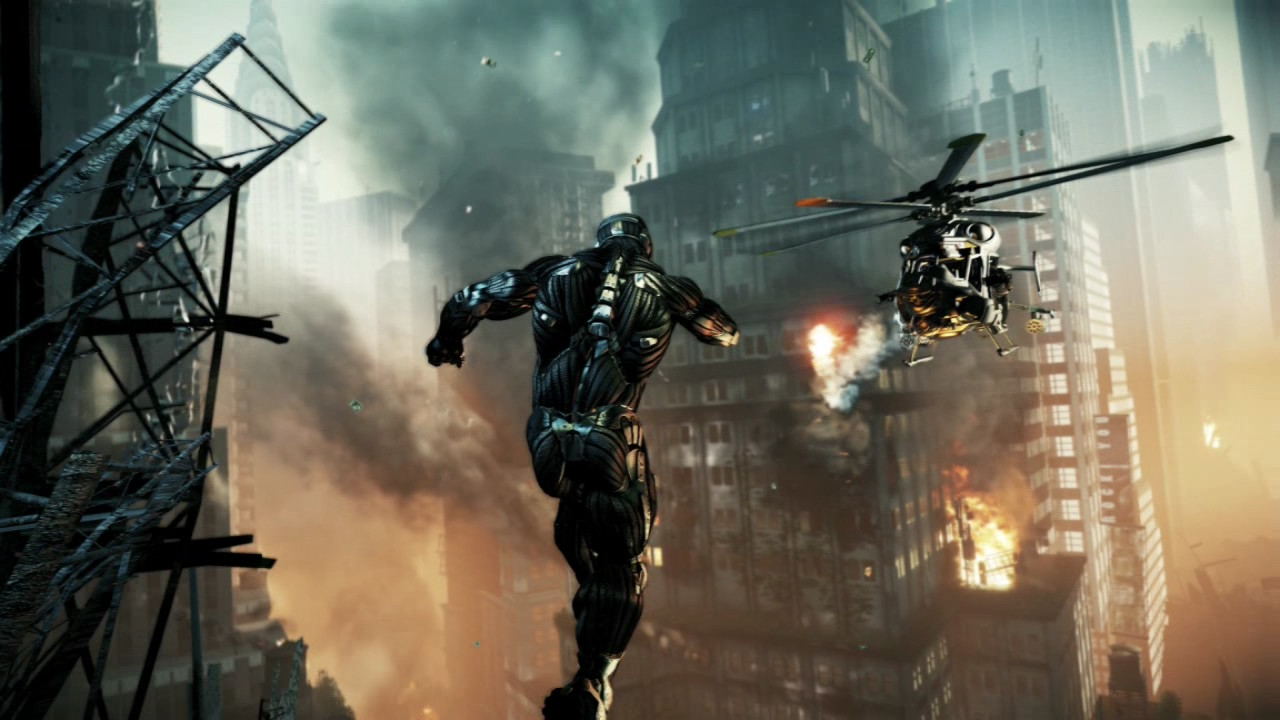 We’re living in a future where you can take Crysis 3 with you on the go—where “but can it run Crysis” has all but vanished from the public consciousness. In 2007, I was struggling to run the Robots tie-in video game on my PC, let alone the beast that was Crysis. Then 2021 comes along and drops the Switch version of the trilogy right into my lap. I could hardly believe it, but this is the real deal. In handheld mode, expect 720p and 30 frames per second across all three remasters; docking the Switch gets each up to 900p—not optimal, especially with the bigger screen size exposing some unwanted details. It’s still a pleasant surprise—I was fully expecting a 540p The Witcher 3 situation.

However, modern hardware and improved graphical fidelity are but parts of a much larger equation. Visually, each game is a stunner—Crysis with its lush forest vistas, Crysis 2 with its detailed city spaces, and Crysis 3, bringing more diverse environments and improved weather effects to the party. Crysis Warhead…maybe next time, sport. But when the gameplay takes center stage, all three feel considerably outdated. The trilogy belongs to an era that made its exit not too long ago—certainly not long enough for me to miss it. Mundane moment-to-moment gameplay and tedious missions are carried by the franchise’s signature style and the nostalgic factor.

The Crysis remaster is arguably the worst offender out of the three, with annoyances on every front. Performance-wise, the Switch version always had something new to throw at you, whether that be constant frame rate troubles, frequent freezing and crashing, or absolutely brutal load times. T.K Hale reviewed the remaster for Switch last year, citing the same issues taking away from the awe of having Crysis on a handheld device. There’s also something to be said about its unsatisfying feedback, coupled with relatively punishing difficulty given the platform it’s on. The controls, too, are awkward and unwieldy—you can tell that this was a game built for PC. 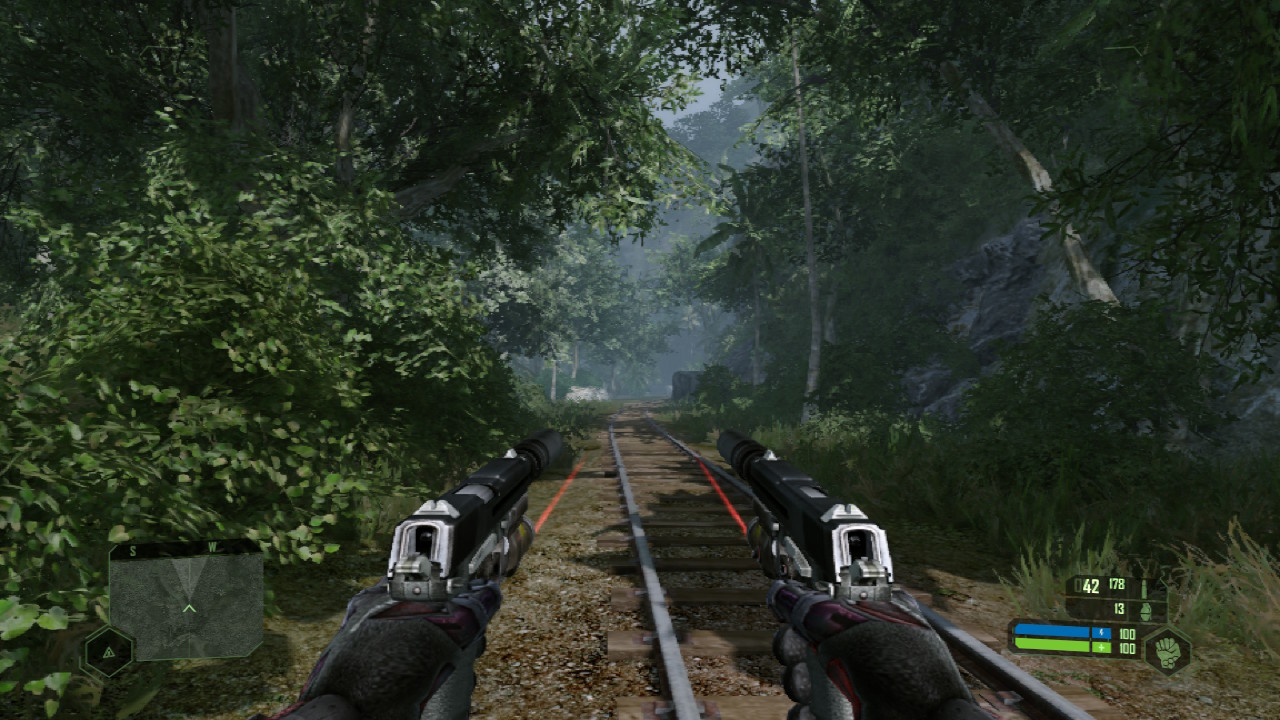 A gun-toting supersoldier on his way to fight aliens.

In Crysis, you and your nanosuit-wearing supersoldier squad land on an island to rescue a team of archaeologists from North Korean soldiers and their own discoveries (yes, it’s aliens). To that end, you’ll chase objective markers all around large, open spaces, make big things go boom, and spew military jargon until not a single other person breathes. Despite how that might sound in the wake of so many shooters, Crysis is easily the most interesting of the three games. Much of that stems from its sandbox-style approach to combat. You’re given the means to approach encounters from any angle and use the environment to gain the upper hand on your foes.

There’s some humor to be found in how each of the Crysis remaster’s unique features worsens the performance of the game. Collapse a shack on yourself and you’ll pay the price with your frame rate, for example. But, in all seriousness, there’s room for so many emergent gameplay moments once you learn to weaponize the game’s physics. You can pick objects up and hurl them at enemies, punch supports to topple structures—you’re a god on this island. It doesn’t hold a candle to the chaos you can unleash in modern systemic games like Breath of the Wild or Metal Gear Solid V, but it’s more than welcome when so much of the mission design is dull and uninspired. 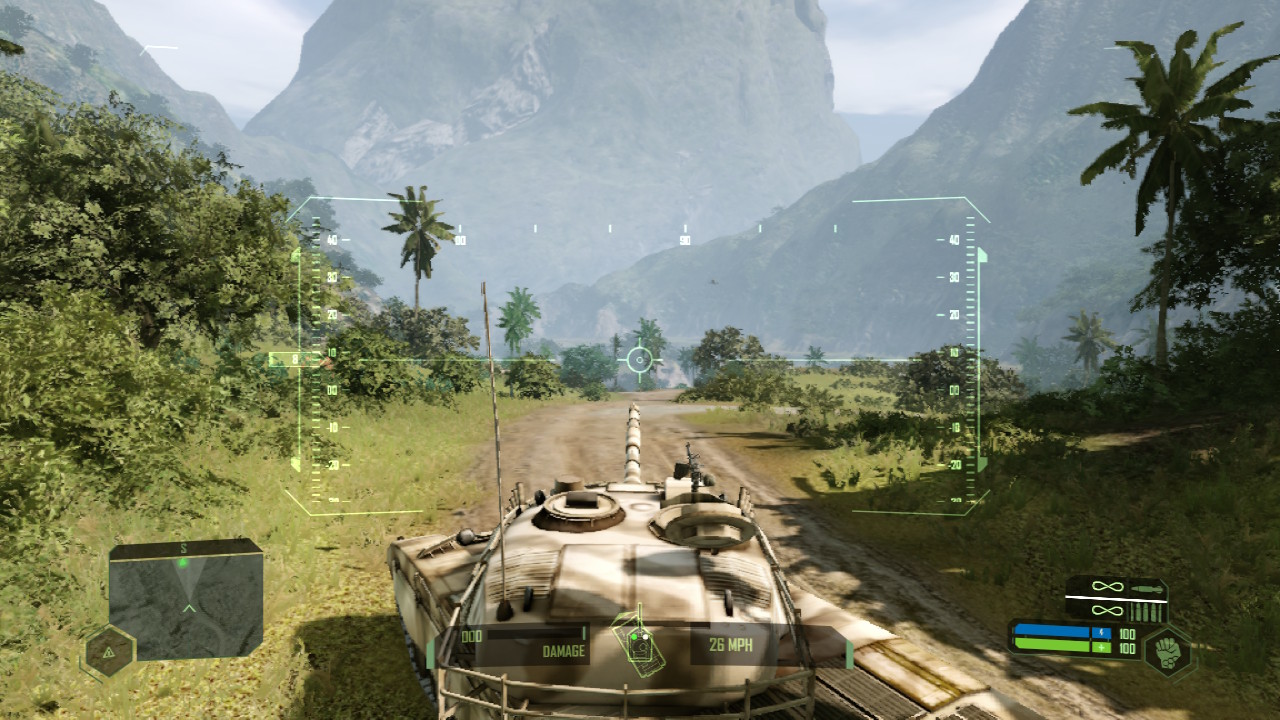 A tank-riding supersoldier on his way to some nebulous objective.

When it works, it works—though, it doesn’t work for long. It’s by far the longest of the three games in the trilogy, and it never justifies that length. Taking over enemy encampments gets hopelessly boring, and there isn’t much to spice it up. If it wasn’t already apparent, the story isn’t much of a motivating factor either. I wandered from point A to B to C to Z, chasing answers that are never worth the effort and objectives that keep rewriting themselves. Sorry, soldier, the laptop is in another prefab. It’s a monotonous island with tedious chores sprinkled all around its mostly barren landscape.

Crysis 2 addresses those concerns by speeding up the pace, tightening up the gunplay, and streamlining the experience. While players mourned the loss of the sandbox stylings of Crysis, you can’t deny the appeal of this shorter, snappier experience. Crysis 2 was much more in line with shooters from that time, with the vibes and visuals to win over that audience. I still remember loading up the Crysis 2 multiplayer beta on my Xbox 360 and having a blast with my friends (the remasters don’t include multiplayer, unfortunately). It might seem blasphemous to many, but I enjoyed Crysis 2 a lot more than Crysis, at least on the Switch. 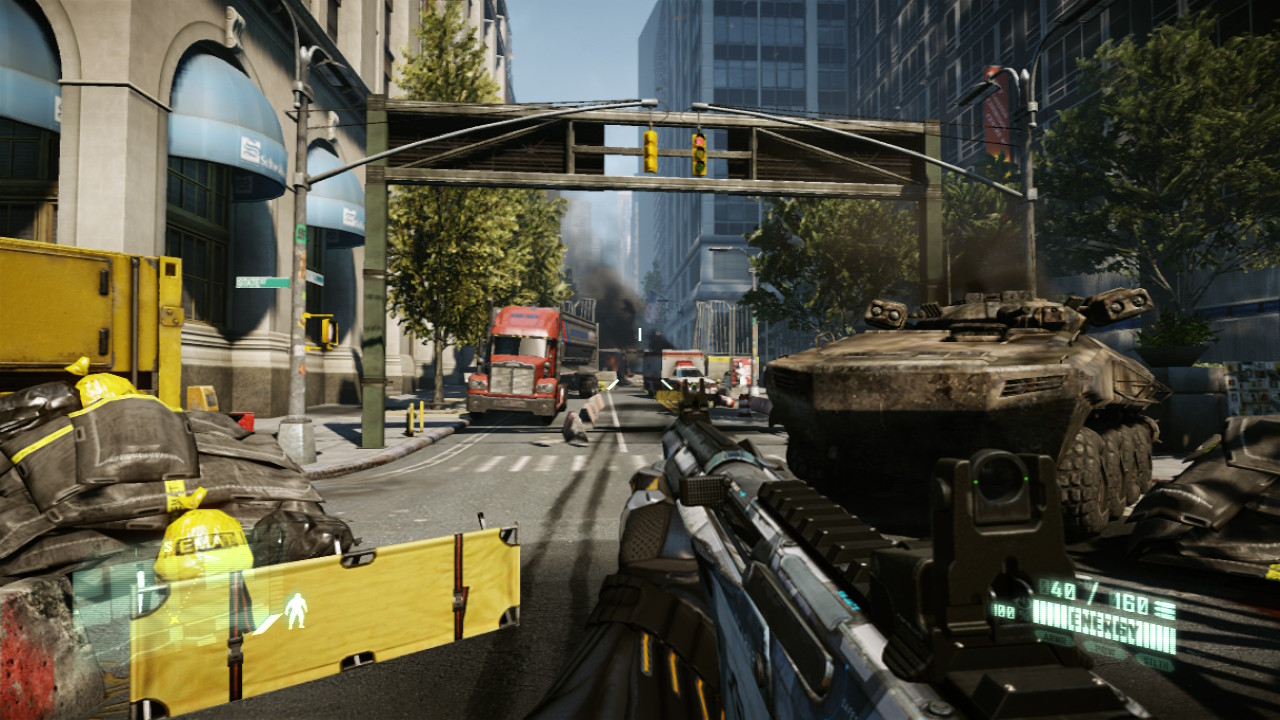 Out the jungle and into the urban jungle.

This remaster features substantially better performance, with a more manageable, yet still rocky, frame rate and zero crashes. Not to mention, the game looks stunning with its more palatable color palette and crispier textures. The game feel is a huge step up as well—the visual feedback and sound design take the moment-to-moment experience of duking it out on the city streets to another level. Aim assistance is also more reliable this time around, which is crucial for someone like me who’s playing with the joy-cons.

Once again, you (unwillingly) don the nanosuit and attempt to rescue another researcher, until the Ceph threat becomes your new priority. And, once again, you chase after objective markers in another cat-and-mouse game, shooting enemy soldiers—from this planet or elsewhere—along the way. It’s a rollercoaster of neat set pieces and scripted events from start to finish with almost no room to breathe. You get a little more to chew on in the form of a nanosuit upgrade system, but your experience with the first mission won’t be all that different from the final one. 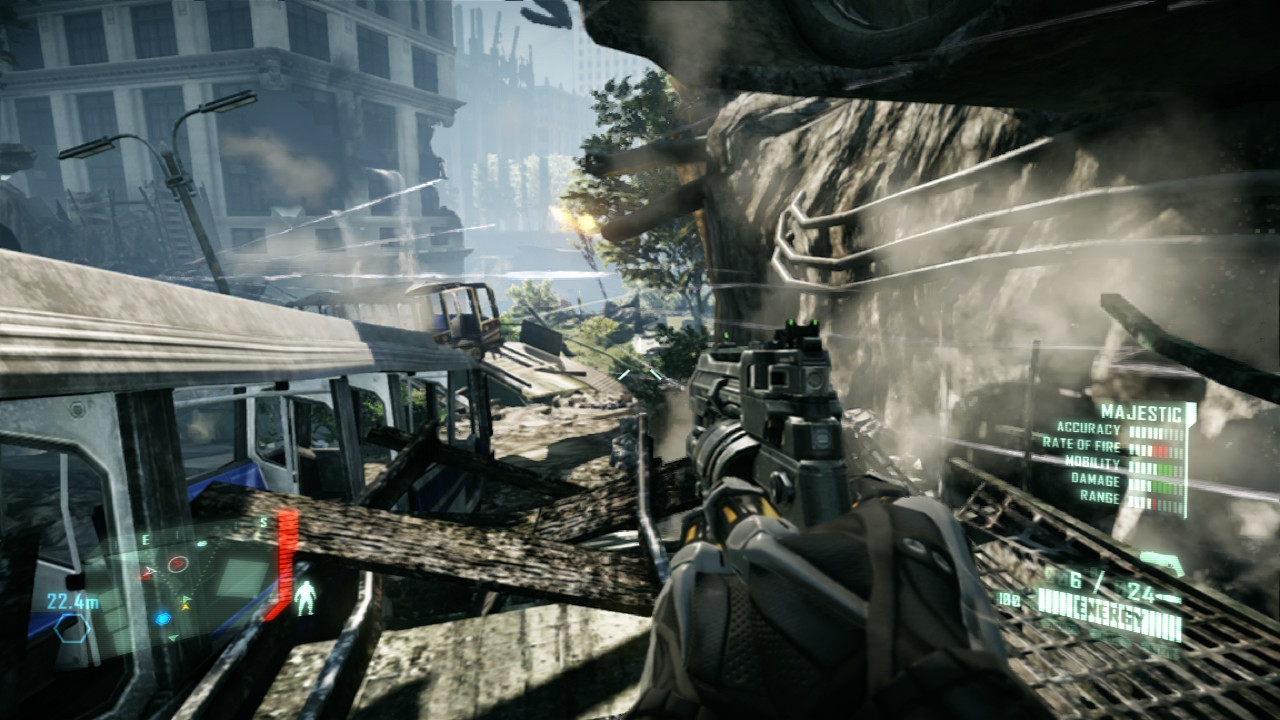 Now if you could topple a house with your fists, the game might’ve been able to stave off a little more mundanity. Grabbing objects and throwing them are still mechanics in the game (and in the third), but they no longer have any practical use. Scattered about are these legacy mechanics that remind you of what the franchise lost. Ultimately, Crysis 2 does little to separate itself from other shooters of that decade beyond a glossy coat of paint. It’s a solid campaign that doesn’t do anything particularly poorly, just nothing interesting like its predecessor. Performance-wise, the sequel has a huge leg up over Crysis, and gameplay-wise, it’s more in tune with our modern sensibilities and expectations.

This brings us to the latest, shiniest installment in the franchise, Crysis 3. I vaguely remember this game coming out, garnering some praise for its cutting-edge visuals, and then exiting the stage without anyone noticing. Out of the three games, Crysis 3 was the only one I hadn’t played. I was curious to see what direction Crytek would go in for the final entry; do they combine the magic of the first and second, or do they just double down and give us Crysis 2 on steroids? Lo and behold, it’s Crysis 2 on steroids, but it does make attempts to welcome more playstyles. The game doesn’t aim specifically for the original’s sandbox-style gameplay as much as it just offers you two or three rigid routes instead of the one. 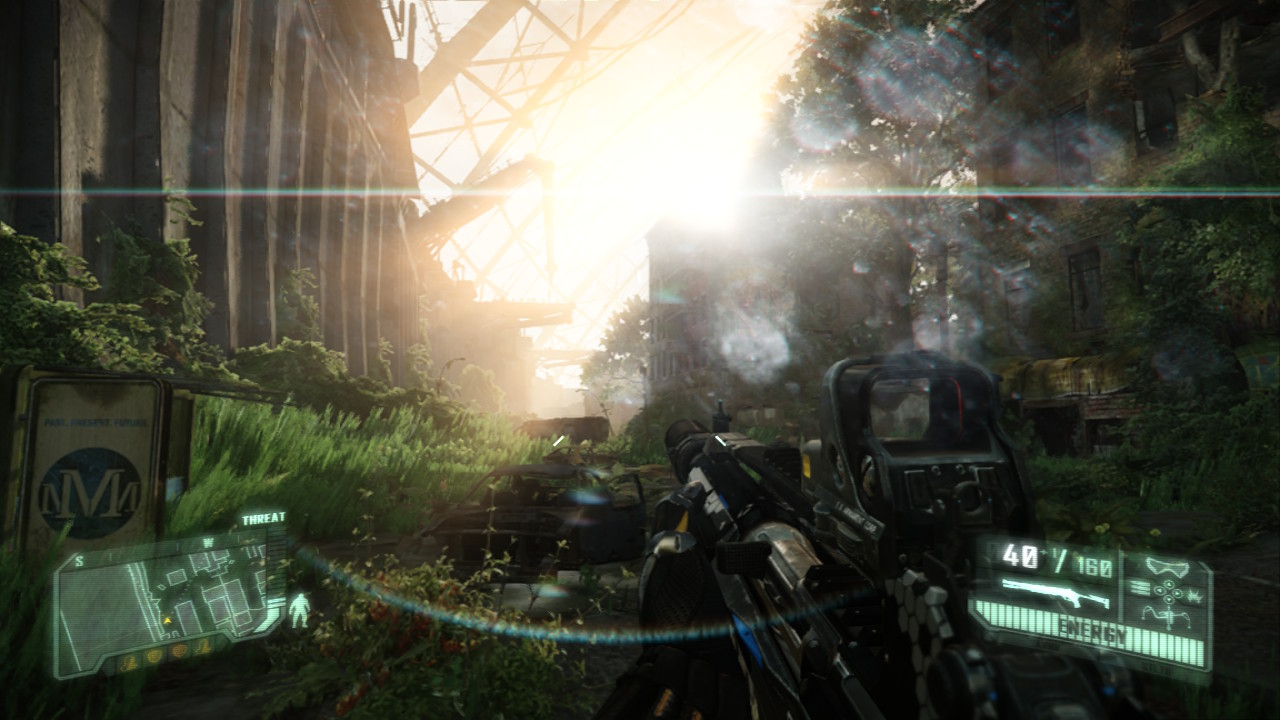 And back to the jungle again, sort of.

The trends continue, with Crysis 3 looking better, performing better on the Switch, and running even shorter. Not to mention the ridiculously effective aim-assist; I was snapping to enemies’ heads from across the arena! Combat is more intuitive across the board, from the way you select your gadgets to the way you highlight enemies with your visor. Stealth is more accessible than ever as well, which makes the silent approach much more viable than it was in the second game. The game also adds a hacking minigame to shake things up, but to little effect. In every encounter, you’ll stop to hack the one token auto-turret, but you’re better off just holding down the trigger.

It’s just as linear as Crysis 2, but the extra effort was put into encounters that encouraged a mild exploration of mechanics and playstyles. One key area you see this is in the level design, which is much more interesting and diverse than it’s ever been. Visually, the game captures a wider range of environments—a far cry from the jungle-only or city-only approach of the previous two games. New environments are complemented by new obstacles that push you towards different gameplay aesthetics. If you’re busting down the front door of a facility in one mission, you’ll be tiptoeing your way past alien-infested fields in the next. 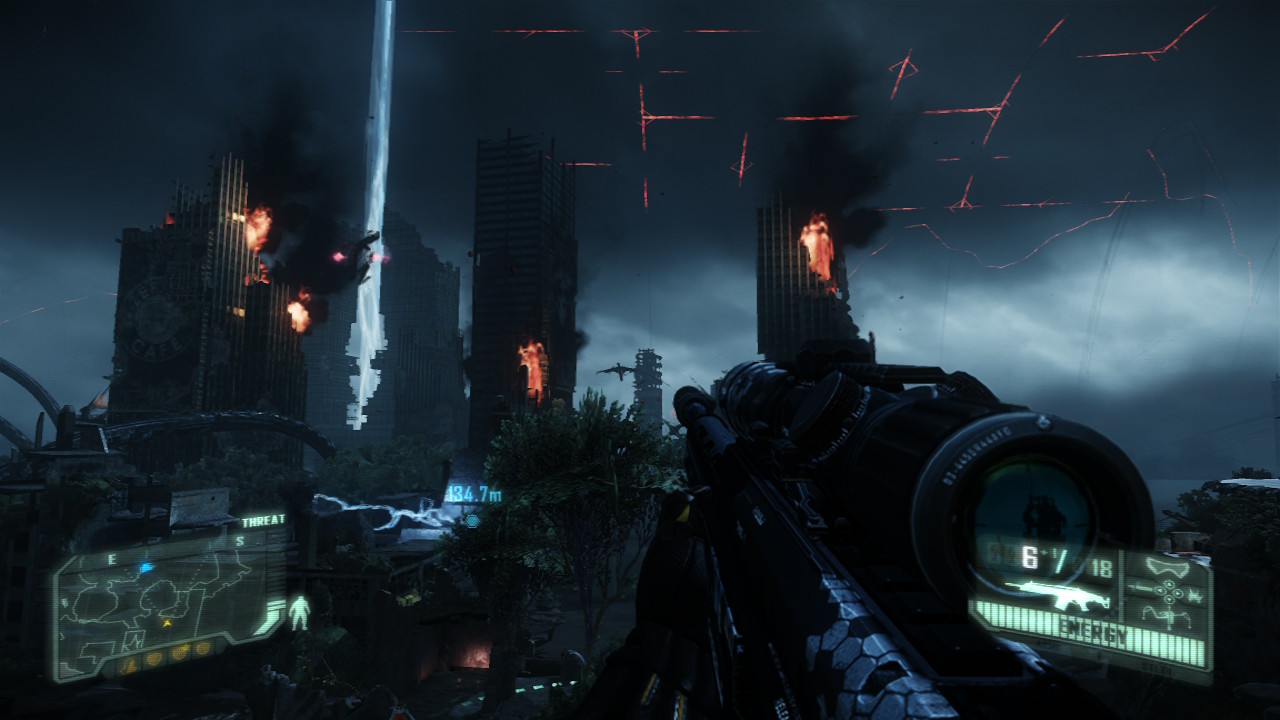 My Switch deserves a long vacation after this one.

Additionally, missions spotlight actual characters with actual motivations in a genuine attempt to ground the story of Crysis 3. There’s tension and growth, yelling and crying, and I welcome it all with open arms, especially after the last two campaigns. Don’t be mistaken, narrative-wise, there’s nothing to really write home about, but the effort is appreciated nonetheless. Like Crysis 2, there’s nothing new or bold about the third game—it’s a competent shooter that neither offends nor surprises. And, you can experience it for what it is with no issues thanks to a great remaster.

With the exception of the original, the remasters performed well above my expectations on the Switch, even if they do fall short of that rock-solid 30 frames per second. It’s nowhere near the best way to enjoy the trilogy but it’s serviceable nonetheless. There’s nothing ground-breaking to be found anywhere but in the visuals department, and that’s best experienced on more powerful hardware. Still, experiencing the evolution of Crysis over six years and three games was a worthwhile endeavour.

A shiny time capsule housing six years of sci-fi shooter evolution. Performance-wise, the Switch is two for three, with the Crysis remaster struggling to keep up with the sequels. If you're in it for the visuals and not just the nostalgic flavors of the previous decade, then the remastered trilogy is best experienced on more powerful hardware.

A self-deprecating, overly sarcastic pair of glasses that occasionally possesses a human host in order to partake in the delightful process of playing video games, then immediately complaining about them. When he is not playing games (a rare occurrence), he can be found either writing about things that no one cares about, or haunting the quiet streets of his Canadian suburb.
Related Articles: Crysis Remastered Trilogy
Share
Tweet
Share
Submit