In Hellmut, an experiment goes wrong and demons flood your lab, killing you and causing chaos. You get resurrected as a floating skull that can transform into various creatures. With the help of these transformations and plenty of guns, you’ll gun down every demon in your path. Hellmut: The Badass From Hell offers a challenge similar to games like Enter the Gungeon, but lacks the content and polish. 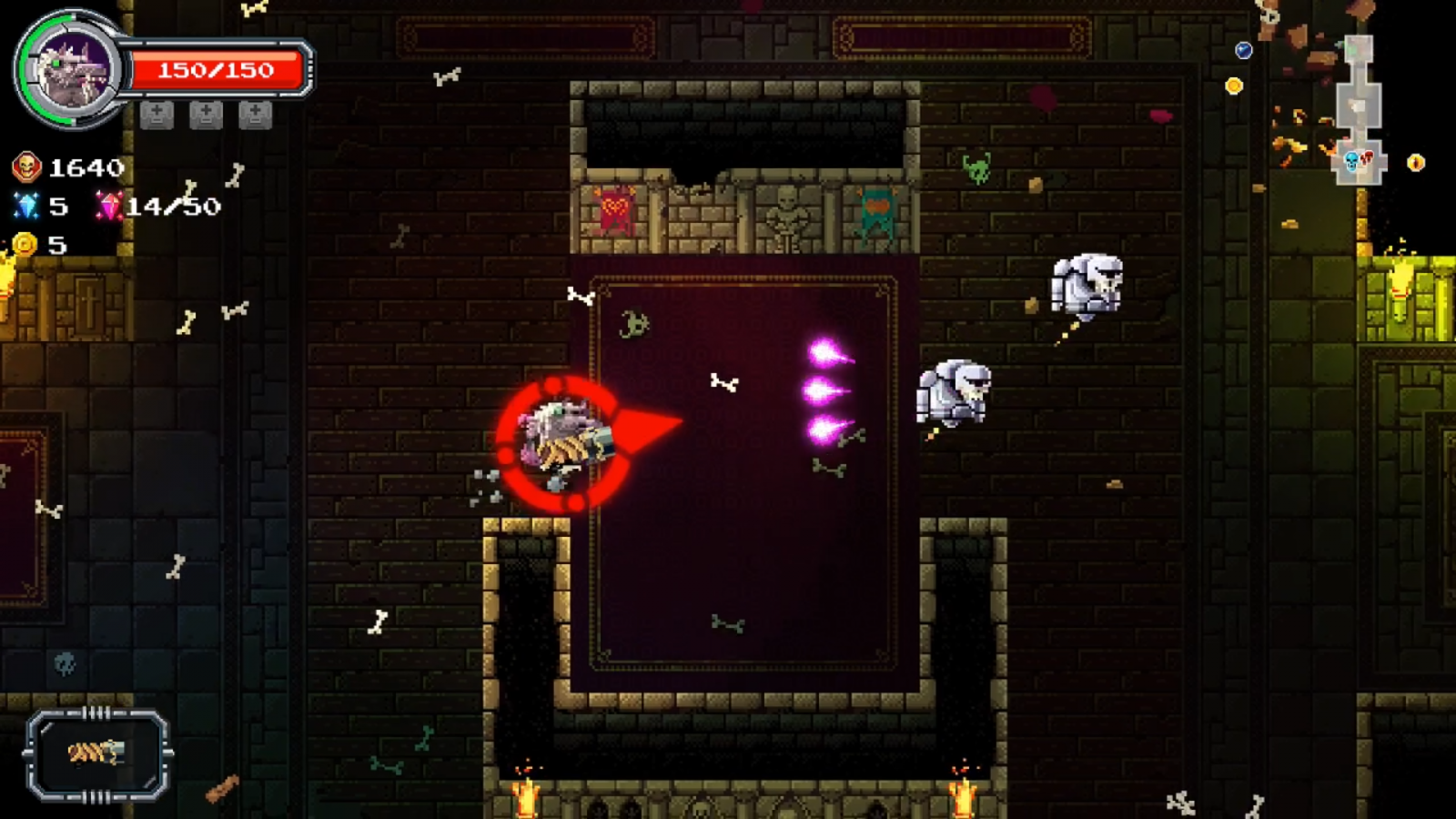 As previously mentioned, you play as a floating skull that can transform into multiple creatures. When starting a run, you choose a creature to start as. When first beginning the game, you only have Stitchmonster and Rat King available, but every time you beat the game you unlock a new transformation you can start with. Each form has its own primary weapon, special move, and health. For example, Slimeball shoots slime and can fire a giant laser, while Orc Fairy fires rainbow balls and can teleport. Each form has its pros and cons, so they are each better suited for different situations.

The game consists of eight regular levels and four bosses, but sometimes mini bosses will appear randomly in the regular levels. Mini bosses must be defeated before you can escape the room they are in. The layout of the maze-like levels is random, but always contains a tome room, at least one shop portal, and the exit portal room. The tome room has a tome that can be activated by spending blue shards. Spending these shards takes you to a bonus stage where you must defeat all enemies within the time limit. Doing so unlocks a random transformation to be used during the rest of this run and will revive the last downed form. This second effect is very helpful if you lost a form recently. 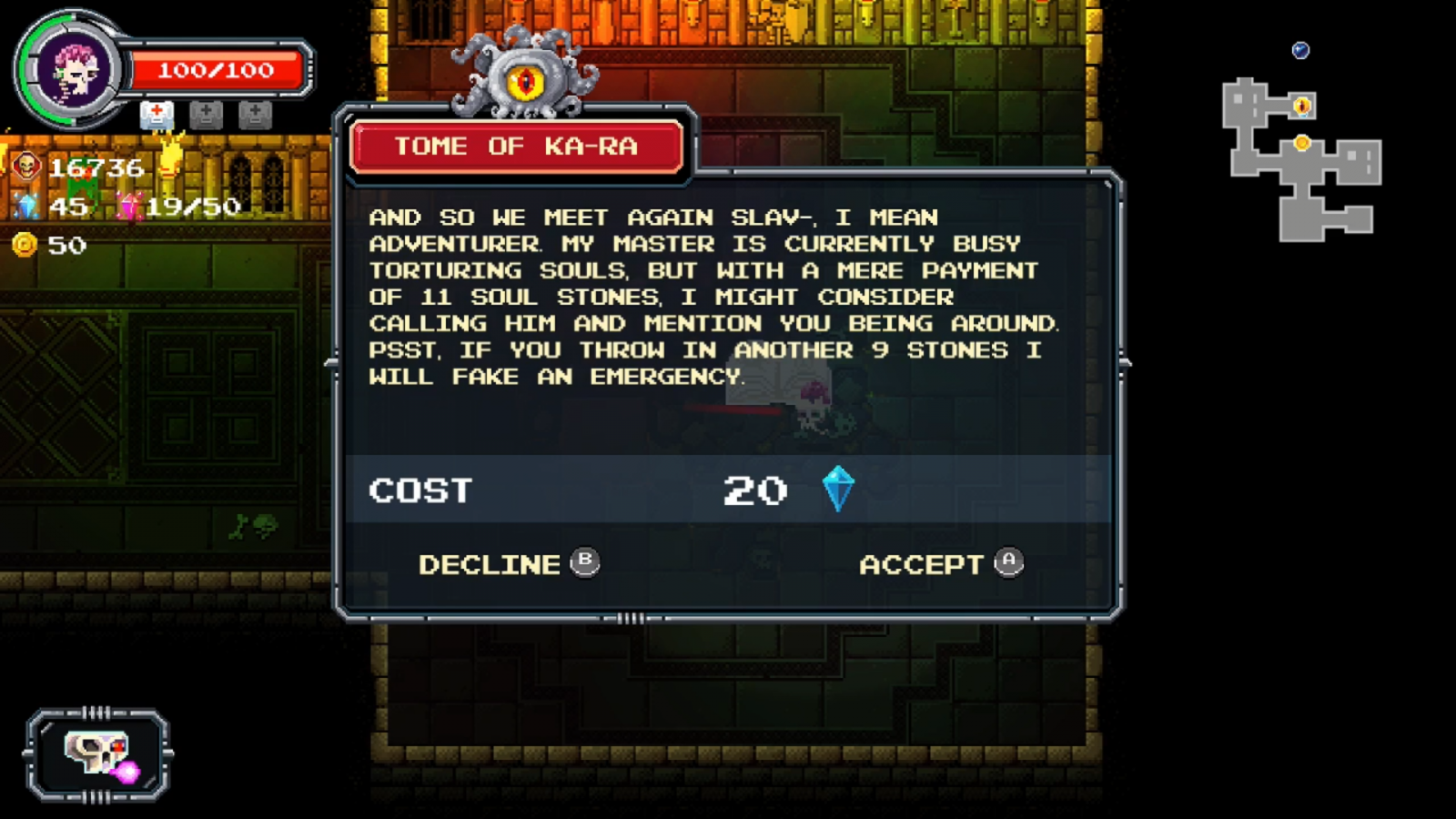 In addition to the floating skull, you can have up to five other forms collected at a time. When one dies, you change into the skull and must quickly swap to a new form to have a chance to fight back. You can fight as the skull, but you are much weaker. Having multiple forms is nice because it essentially grants you extra lives. In order to revive a form, you either need to complete a tome challenge as mentioned above, or use a resuscitation orb. You can purchase orbs for a hefty sum of 60 blue shards. The tome cost tends to be much lower, so you’re better off doing the challenge. In addition to the orb, you can also purchase more powerful weapons in the shop or even find them in chests throughout the levels.

The gameplay offers a challenge but doesn’t get too difficult. There are exceptions with some bosses that can be a pain and other situations where enemies spawn surrounding you. I’ve had several times where enemies spawned on top of me and trapped me with no escape. I would attack wildly but that form usually got killed, causing me to swap to a new form in order to attempt my escape. Orc Fairy’s teleport is the best way to escape if you don’t want to stay in place and fight. The creature and enemy designs are interesting, but nothing amazing. The levels themselves get repetitive fairly quickly, which is unfortunate considering they are randomly created. That being said, Hellmut: The Badass From Hell offers an alternative to games like Enter the Gungeon, but doesn’t have the same level of polish and content.

Hellmut: The Badass From Hell

Hellmut: The Badass From Hell is an interesting rogue-like shooter where you can transform into various deadly creatures. The gameplay is engaging but doesn't get too difficult and doesn't take long to complete a run. Having multiple forms is fascinating and very helpful in the long run.

Codi loves to play video games and watch movies. He will watch almost any kind of movie just to experience them. His ideas take inspiration from the shows and movies he watches, and games he plays. He also loves a good pun.
Related Articles: Hellmut: The Badass From Hell
Share
Tweet
Share
Submit