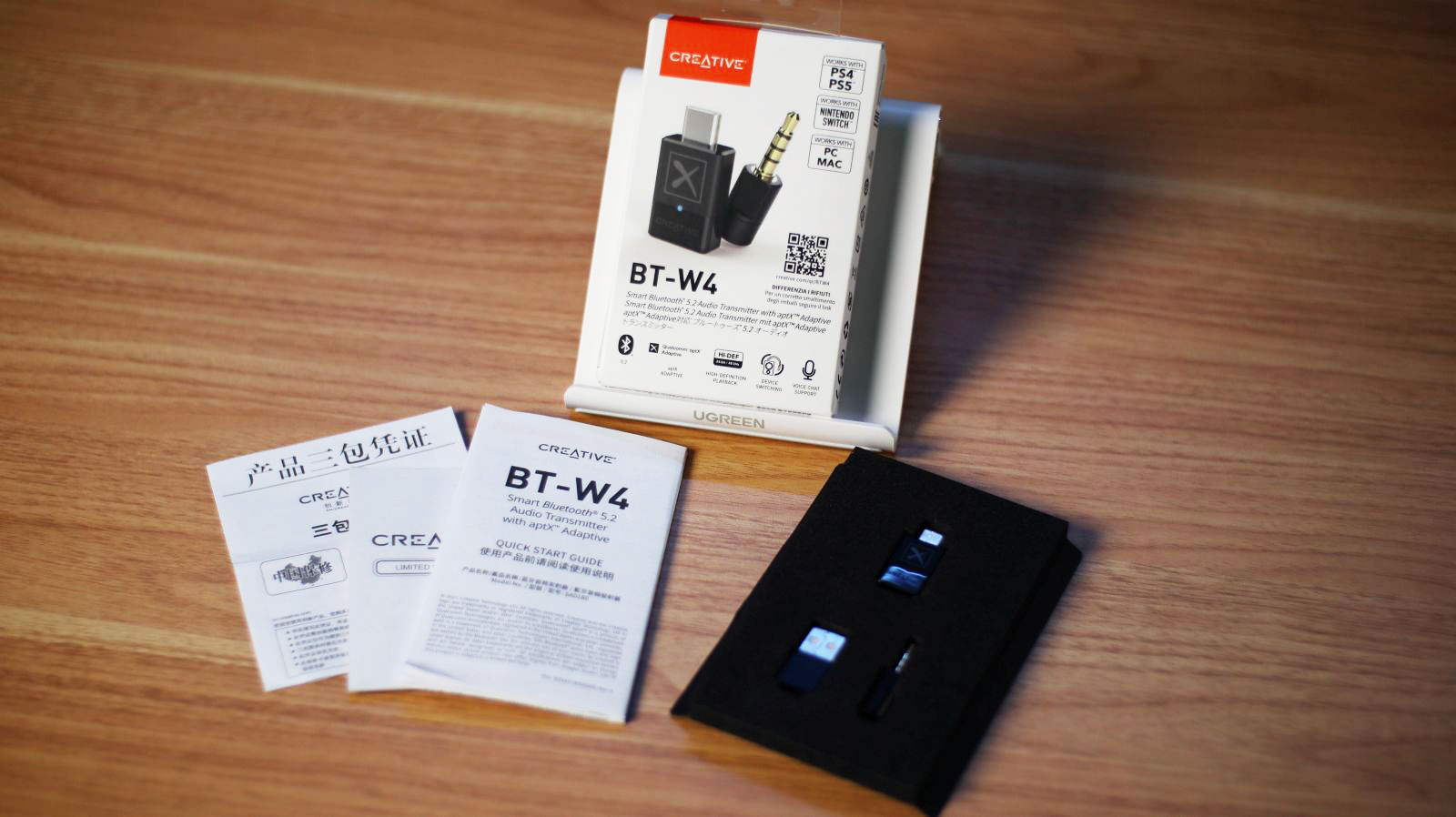 I have a drawer in my office that is filled to the brim with highly-useful things that are only highly-useful in very specific situations. Obtuse cables, adapters both analog and digital, add-in cards, external hard drive readers and more soak up valuable storage space because I might need those items for a project. I don’t need those items, until I desperately need them, and at that point they are invaluable. Creative Labs has a niche product that fits that category, and it solves a problem while providing a mid-level upgrade that you might not know you needed. The Creative Labs BT-W4 is a refinement on its predecessor the W3 (as well as the W2 and W1, as you likely have guessed), and it contains far more features than the tiny little device might suggest. Let’s unpack the tools and the tech and see how you might find a use for it yourself.

I suppose the first job I have is telling you what the BT-W4 actually does. This device is a high-resolution plug-and-play audio transmitter to connect devices via Bluetooth 5.2. Supporting PC, Mac, PS4, PS5, and Switch (sorry Xbox folks – no dice), you might be thinking “Many of those devices already have Bluetooth – why would we need this?”, so let’s dig into that. 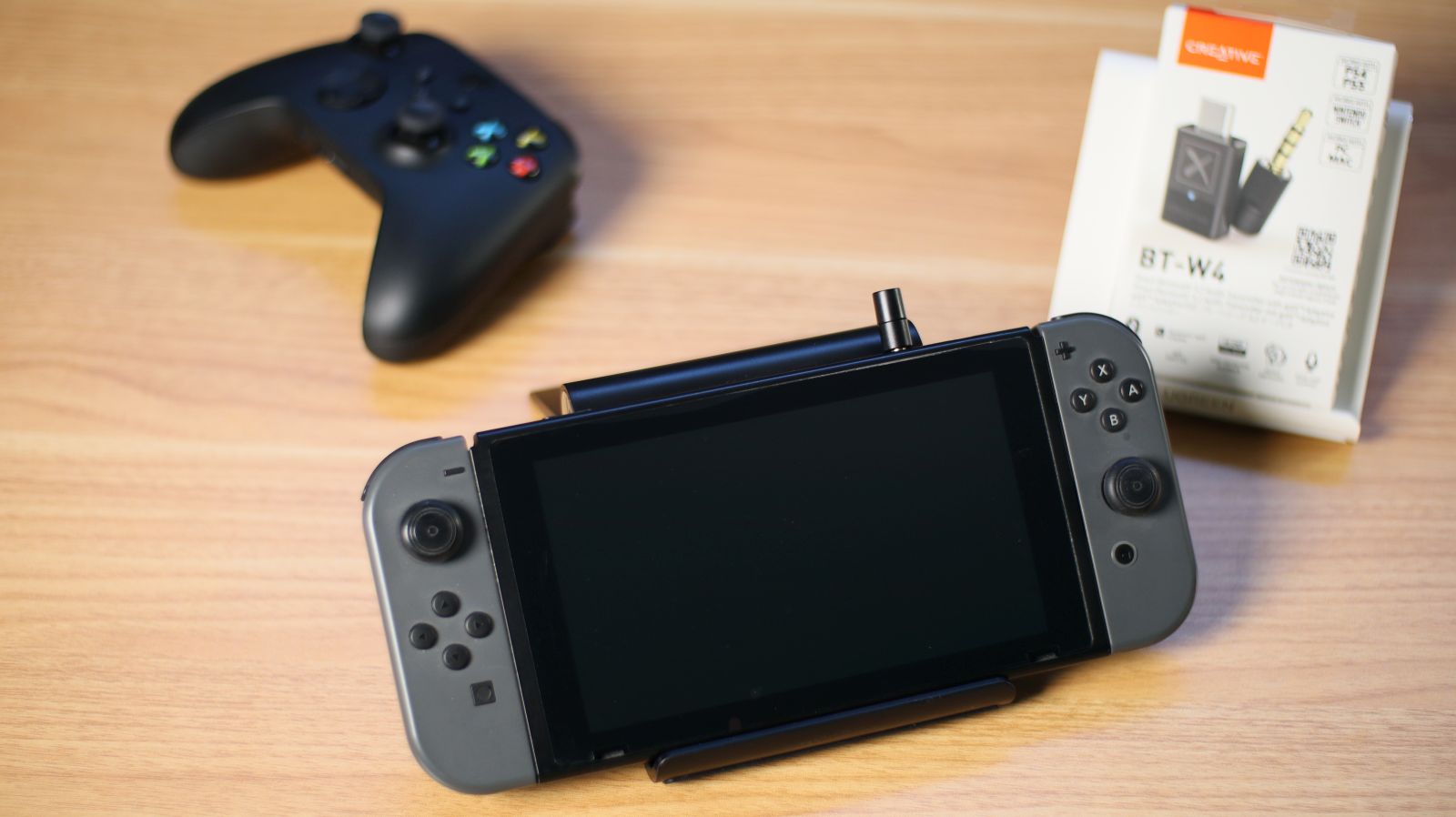 First and foremost, every device you purchase is a point in time. Especially with consoles, until a new version of that hardware appears on the market, whatever hardware that device shipped with is what it will have until the stars burn out. For example, the Nintendo Switch is Bluetooth 4.1, the PlayStation 5 supports Bluetooth 5.1 and your phone is a roll of the dice on what it supports. As new headphones come out, they’ll often support backwards compatibility, but you lose out on the advanced features, such as improved range and more reliable connectivity. The not-so-cleverly named BT-W4 aims to fix that.

Literally a pinky-finger-sized thumbdrive, this little guy is tiny. Plugging into a USB-C port, or into a USB-A port with the included adapter, the BT-W4 immediately provides Bluetooth 5.2 support for that device, improving the range, and offering a connection point for the latest and greatest on the market.

Beyond consoles, there are a few other use cases where you might want to use a bridging device like the BT-W4. Receivers go out of fashion faster than…well, fashion. They swap out featuresets every time a new version comes out and Bluetooth is often the first casualty. My Onkyo from three years ago does a bang-up job powering my TV and sound, but with the company going under recently, there’s no hope of updates, and the Bluetooth firmware I have on that device is incredibly unstable. The BT-W4 allows me to bypass that problem entirely, bumping that device back to current for Bluetooth support. That means proper connection for my Turtle Beach Stealth 700 Gen 2, my 8Bitdo Sn30 Pro Bluetooth Gamepad for classic gaming, and all my consoles without a hitch once again. 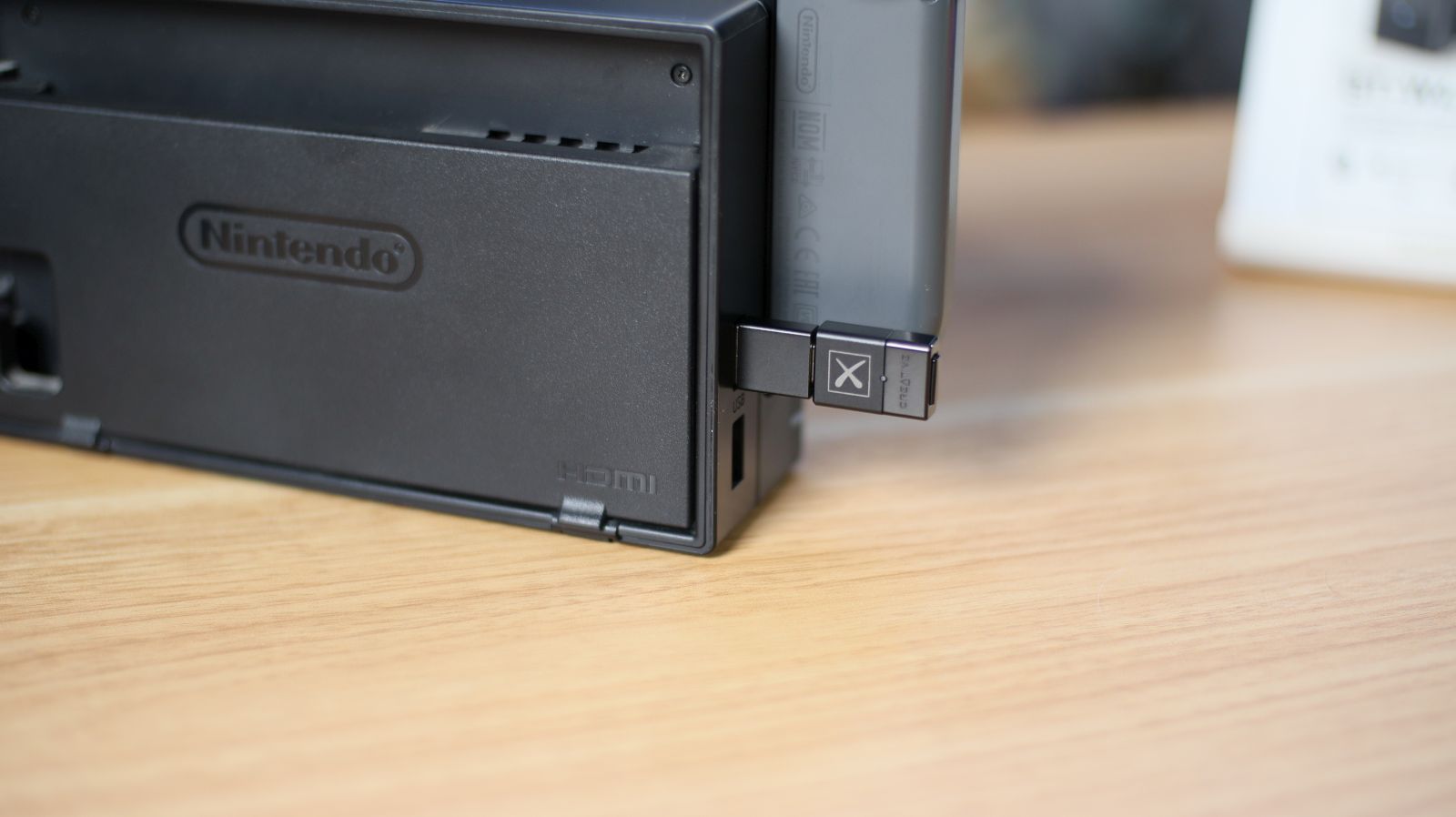 One of the primary differentiators for the BT-W4 is that it is a true high-definition 24-bit / 48 kHz audio device. The three predecessors, as well as all of the competitors I could find, are all 16-bit. They also all have one other thing in common – roughly 65 feet less range. The BT-W4 is capable of transmitting at a high bitrate at ranges upwards of 165 feet, with any competitor at any price being just 98 feet. Ignoring the distance (who games from 150+ feet away?), let’s focus on that bitrate.

16-bit vs. 24-bit sounds reminiscent of the early console wars, but in this case we are talking about the aptX Adaptive codec. This codec supports a wider band for RF transmission, utilizing a brand new QCC3056 Qualcomm CPU to handle error correction and processing. By providing a wider channel, the BT-W4 can shuffle between various channels, allowing for dynamic scaling, automatic band switching, and bitrate stabilization. What’s all that mean? Well, for you it means a cleaner signal that most importantly stays stable when it matters. Free from any interference from other RF-transmitting devices, you won’t hear digital tiling, face disconnects, or hear anything less than the very best audio presentation possible. There is a bit of a catch, though.

The aptX Adaptive codec is an evolution of their previous efforts – namely the aptX-LL and aptX-HD. The LL and HD codecs have been deprecated over time by chip developer Qualcomm. The LL in aptX-LL stands for low latency, coming in at around 30ms of round trip time. aptX-HD stands for high definition, as you may have guessed, focusing more on quality than latency. aptX Adaptive is a blend of the two, aiming for high bitrate and speed, coming in at around 80ms and 576 kbps, respectively. But that’s on paper, right? Let’s hook it up to a few devices and see how it plays out in practice. 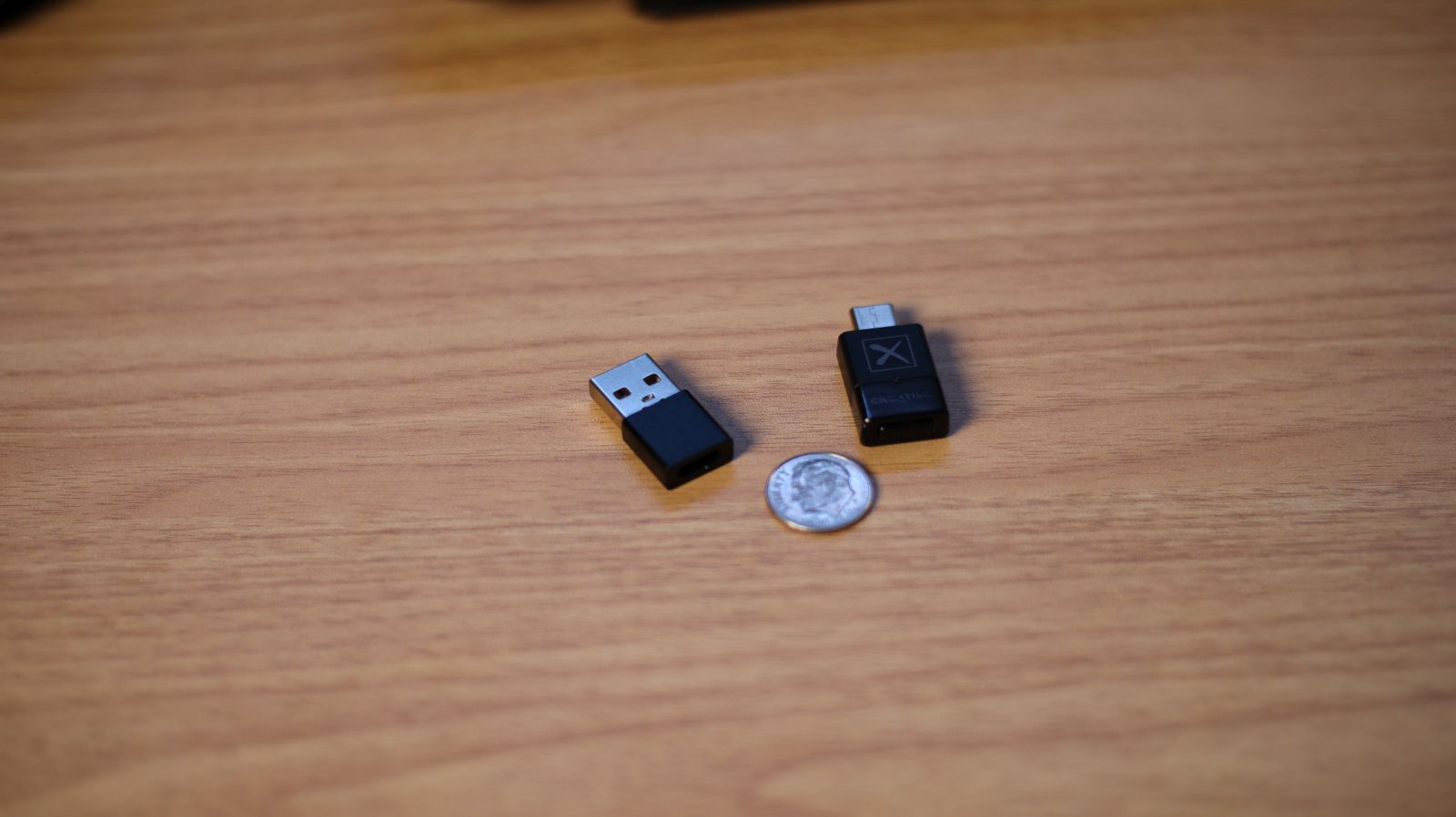 Pairing on the BT-W4 is dead simple. There’s a physical pairing button on the device, and pressing that for two seconds will put the BT-W4 into pairing mode. Doing the same thing for your Bluetooth-enabled device will connect to it immediately – no long wait here. The magic trick here is that you aren’t paired to the device you’ve connected to, but instead are paired to the dongle itself. This means you can grab and go between devices without needing to re-pair. Popping between consoles has never been easier, and that cannot be overstated.

Plugging the USB-C dongle into the bottom of the Nintendo Switch, the console immediately powered the device. Holding the button on the bottom, it paired with my headphones without so much as a second’s hesitation. Pulling it from the Switch and plugging it into the PlayStation 5, my earbuds and my headphones were both ready to go. Tapping the button made it easy to switch between them, and that alone is worth the price of admission.

My PC supports Bluetooth but despite being 5.2, it seems to have a range of about 2 feet. I’m not sure why that is, whether it’s the steel and glass case or something else, but with the device within arms reach it still drops connection with my Razer Anzu Smart Glasses routinely. Plugging in the BT-W4 moves the Bluetooth receiver to the top of my case. I was surprised as it immediately solved the disconnect problem! Cool as that is, it’s the next trick that really surprised me.

With Windows, you can connect up to seven devices (at least that’s what the standard says) simultaneously to a Bluetooth connection. In reality, that number is about four, reliably. That’s honestly enough for my purposes, but with consoles it’s a whole different thing. There is no Windows operating system to quickly switch between devices, nor any centralized management console. As such, quickly switching between devices is a laborious task, fishing through labyrinthian menus. The BT-W4 has a physical button on the device that allows you to switch between four devices with the press of a button, and it can all be programmed with the Creative App on your phone or tablet.

On consoles you’ve got two connections to deal with – one for your controller, and another for voice chat. The BT-W4 has you covered here as well. Plugging in the included 3.5mm audio transmitter into the microphone port you’ll be able to use your headphones in stereo while still utilizing your audio device’s microphone. So many devices are either/or, but with the BT-W4, you have both. 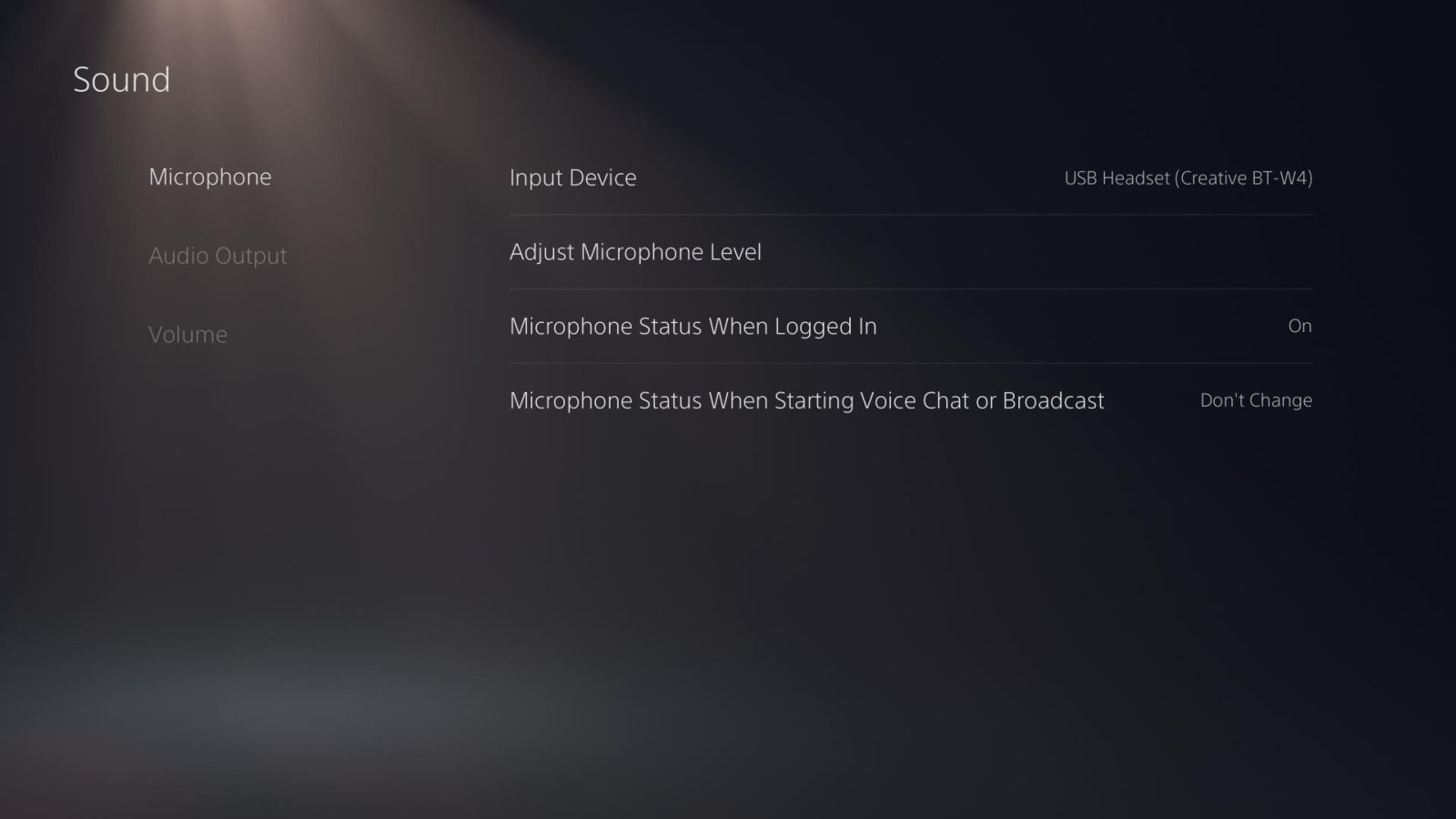 The Creative App allows direct management of devices you’ve paired, adjusting which order they are selected with the button press, and tinker with the equalizer.

Thankfully, the bridging tech doesn’t require full support to benefit greatly from the improved technology. Having the BT-W4 bridge the gap between older sources and newer devices extends the life of those devices. I had an old pair of earbuds that I liked very much that worked on all of my devices perfectly, enjoying all the benefits without the need to try my hand at finding an audio device that fits as well as my old reliable. 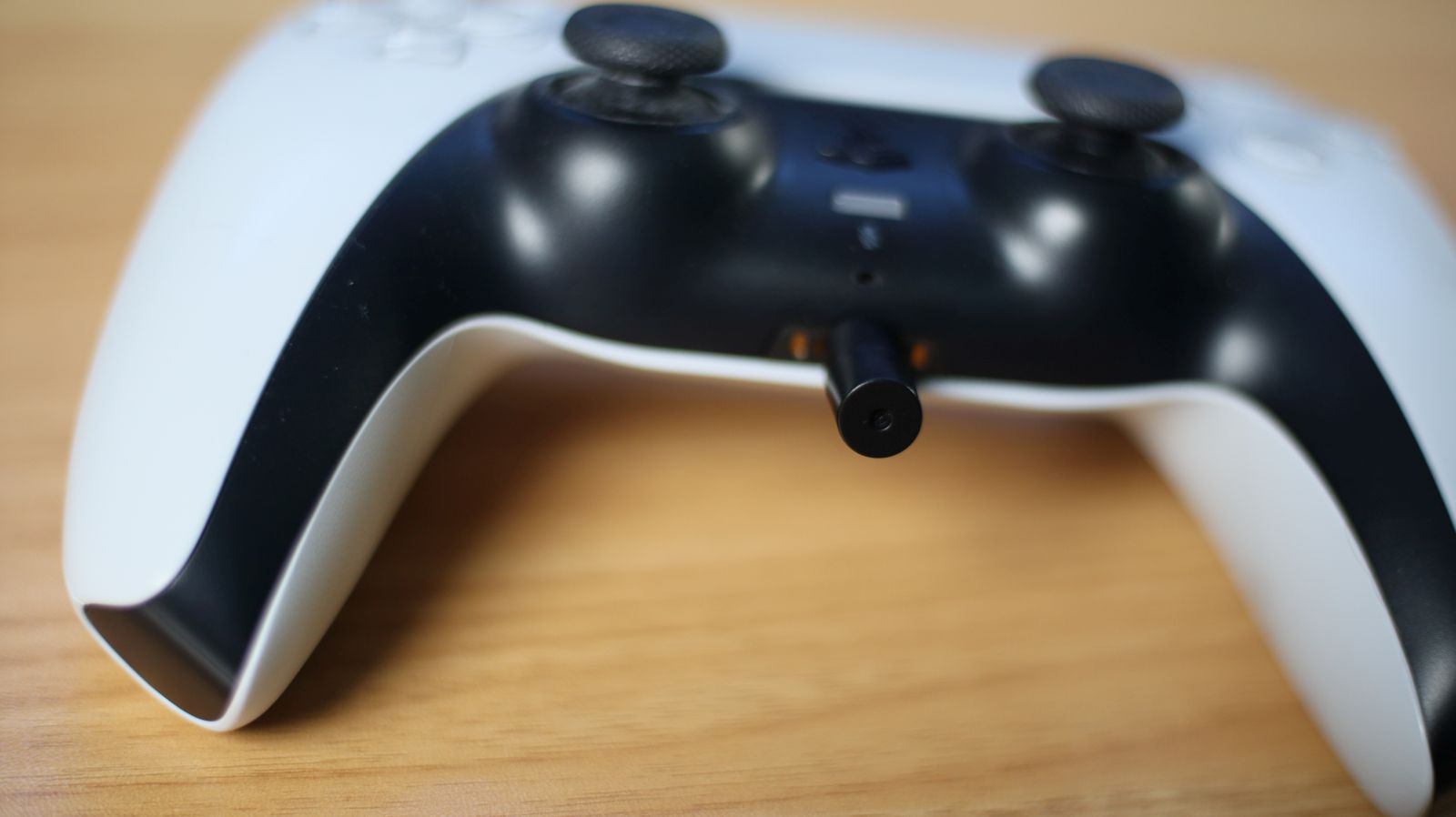 Last but not least, there is direct support for a secondary audio mode called HFP. HFP, or hands-free profile, allows you to answer an incoming phone call by simply double tapping on the Bluetooth button. This lets you use the built in microphone on your Bluetooth device, as well as your headset for audio, albeit at a slightly reduced audio quality to create space for the microphone audio channel. It’s a simple system that solves a problem I didn’t realize was such a challenge for other audio devices.

The BT-W4 does precisely what it sets out to do, providing a nearly lag-free bridge between modern consoles and aging audio sources, extending the life of both. The ability to quickly switch between four devices makes it worthy of the price of admission, and that it does it so simply is just icing on the cake.

Ron Burke is the Editor in Chief for Gaming Trend. Currently living in Fort Worth, Texas, Ron is an old-school gamer who enjoys CRPGs, action/adventure, platformers, music games, and has recently gotten into tabletop gaming. Ron is also a fourth degree black belt, with a Master's rank in Matsumura Seito Shōrin-ryū, Moo Duk Kwan Tang Soo Do, Universal Tang Soo Do Alliance, and International Tang Soo Do Federation. He also holds ranks in several other styles in his search to be a well-rounded fighter. Ron has been married to Gaming Trend Editor, Laura Burke, for 21 years. They have three dogs - Pazuzu (Irish Terrier), Atë, and Calliope (both Australian Kelpie/Pit Bull mixes).
Related Articles: BT-W4
Share
Tweet
Share
Submit