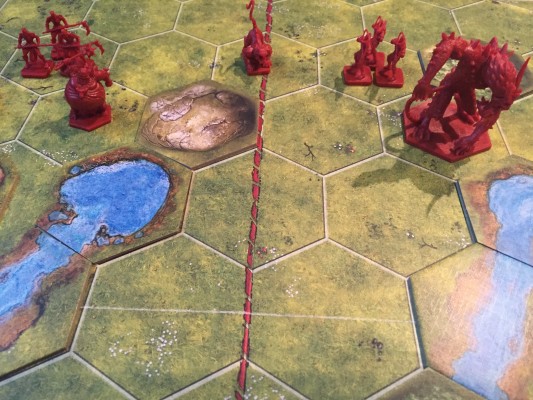 I remember seeing BattleLore when Days of Wonder released it. It looked like an intimidating game, with fantasy characters battling across hex-based maps. Some maps seemed to sprawl over several tables. After Fantasy Flight Games acquired the rights to BattleLore, I didn’t think much of it, other than the fact that it was a great fit because of the spectacular figures FFG has created for other games like Descent, StarCraft, and World of Warcraft. While they did release a couple of expansions and the original game, BattleLore went silent for a long time. Eventually FFG announced a Second Edition of BattleLore set in their Runebound universe. Since they are in the habit of streamlining older games, I was curious if this would be something I could jump into.

Each side is made up of units. Some units are made of a single figure but take multiple hits to destroy, while others have multiple figures. When starting the game you muster an army by taking cards representing the units and keeping enough so that their sum totals 50. You are required to have eighteen of these cards, so you implement decoy cards to fulfill that requirement. Each player lays these cards down in the deployment hexes shown on the scenario cards each player chooses for their faction. After both players have placed their deployments, both players reveal their cards and place the figures on each hex. While the setup sounds complex and takes a little while to complete, it gets quicker after doing it a couple of times. It’s an integral part of the game that shouldn’t be skipped. If you are playing with someone new, or don’t feel like creating your army from scratch, FFG has included six army cards that give some starting armies to help setup go quicker. While I wish that there were more than three of these for both factions, I think that this helps encourage players to create and experiment with the armies they can create.

Once the command card is laid down, the player orders the units they want. First the ordered units can move up to their movement value. Once all ordered units have moved they can attack exposed enemies in range. Custom dice determine the outcome. Some sides are successful hits for melee and ranged combat, while others force the defending unit to retreat. Others give the player Lore tokens or activate special abilities. It would have been nice if more dice had been provided though, as some attacks require more than four dice. If the unit conquers the defending hex, the attacking unit can move into that hex if it is adjacent. Otherwise the defending unit can counter if the attacking hex is adjacent.

Lore tokens can be spent during a later step to activate cards with incredible abilities. These are powerful enough to swing the momentum of the game. However, since this step is after your attack, you have to plan ahead when you use the card. You can also take lore tokens and lore cards during this step, so you aren’t only gaining lore during combat.

The cards of war

Two victory conditions exist. Defeating the opposing enemy units immediately wins the game. If a player has sixteen or more victory points at the beginning of the first player’s turn, both players compare points and the player with the most points wins. Gaining victory points is done by controlling hexes on the board containing a banner marker or fulfilling conditions explained on the scenario cards. The banner marker placement is indicated by the scenario card you use and represent strategic locations on the board. I wish these were more thematic by changing the banners to a sacred tomb or a magical trinket, adding some flavor to these points on the battlefield. It would help tell a story, maybe how the noble Daqan protected the members of a convoy from the Uthuk. Giving the player an offensive or defensive bonus would make these areas more contested as well. This might have thrown the balance of the game, but it could be house ruled in if you wanted to. In any case, competing for these locations can be intense and victory points can accumulate quickly if these are well defended. The scenario cards give victory point conditions as well, which helps to change up the strategy in each game. These conditions generally depend on friendly units occupying specific terrain hexes, although one scenario has the player gain victory points by preventing enemy units from occupying any areas within two hexes of specific areas.

I like the command card system because it limits what players can do on a turn while still giving options. It allows multiple units to move instead of having all nine units moving and trying to remember if you moved specific units or not. Allowing multiple units to move instead of just a single unit gives movement a nice flow instead of focusing on a single unit each turn. If you find you don’t like any of the cards you still have an out by turning in a card and activate a single unit. This might also be a better option during your turn depending on the scenario.

The Daqan Lords prepare to protect the battleground

As you might expect with a Fantasy Flight release, this box is filled with plastic. Each army comes with 46 figures. They include ranged and melee armies, mobile units, tank types, and a boss type. They show a nice level of detail which is surprising for the size of the figures. The Obscenes are grotesque boil-covered blobs holding maces, while the Flesh Rippers look ready to pounce on unsuspecting figures. The Rune Golems look strong with their literally rock-hard bodies, while the capes of the mounted Riverwatch Riders give the illusion of swift movement. The melee and archer units look most similar to each other, but the Citadel Guards and Yeoman Archers look noble, while the evil Viper Legion and Blood Harvesters wear ragged outfits. The spikes covering the Chaos Lord are surprisingly pointy. All of these together bring out the Runebound world. The smaller figures come from a single mold, while the larger units have a little bit of assembly. Don’t let thoughts of the original Super Dungeon Explore run through your mind and make you run away. Putting them together shouldn’t take more than five minutes, placing heads on the Rune Golems or putting the top and bottom of the Obscenes together. While you don’t need to glue them together you might want to on the impressive Chaos Lord and Roc Warrior since these figures have more than two pieces that fit together.

While some units are more powerful than others, none of the units are completely dispensable. You’ll want the archers to slow down the movement of the mobile units, and the melee units can slow down the tanks. At first the sides look symetrical, especially since each army includes the same number of ranged, melee, mobile, tank, and boss units. However, one of the sides is more mobile, moving around the board faster, while the other army is slow but makes up with it with their strength.

FFG has been known for having incredibly difficult rulebooks, like Arkham Horror and StarCraft. However, they have taken several steps forward recently with their writing, splitting up the rulebook which explains how to play the game and a reference book that explains any terms that come up. The rulebook reads well, giving examples and direction how to play.

I had wanted to try Memior ’44 for a while, but I’m glad that I got introduced to the Command and Colors engine with BattleLore Second Edition. As long as someone doesn’t mind the fantasy setting, it is an approachable light hex-based war game with plenty of strategy. With the upcoming armies coming out to add variety, I can see the Second Edition gaining traction that the original edition didn’t enjoy. With Fantasy Flight Games behind this edition, I can see plenty of support coming in the next several years.

While not working as a Database Administrator, Keith Schleicher has been associated with Gaming Trend since 2003. While his love of video games started with the Telestar Alpha (a pong console with four different games), he trule started playing video games when he received the ill-fated TI-99/4A. While the Speech Synthesizer seemed to be the height of gaming, eventually a 286 AT computer running at 8/12 Hz and a CGA monitor would be his outlet for a while. Eventually he’d graduate to 386, 486, Pentium, and Athlon systems, building some of those systems while doing some hardware reviews and attending Comdex. With the release of the Dreamcast that started his conversion to the console world. Since then he has acquired an NES, SNES, PS2, PS3, PSP, GBA-SP, DS, Xbox, Xbox 360, Gamecube, and Wii. While not playing video games he enjoys bowling, reading, playing board games, listening to music, and watching movies and TV. He originally hails from Wisconsin but is now living in Michigan with his wife and son.
Related Articles: BattleLore Second Edition, Tabletop
Share
Tweet
Share
Submit