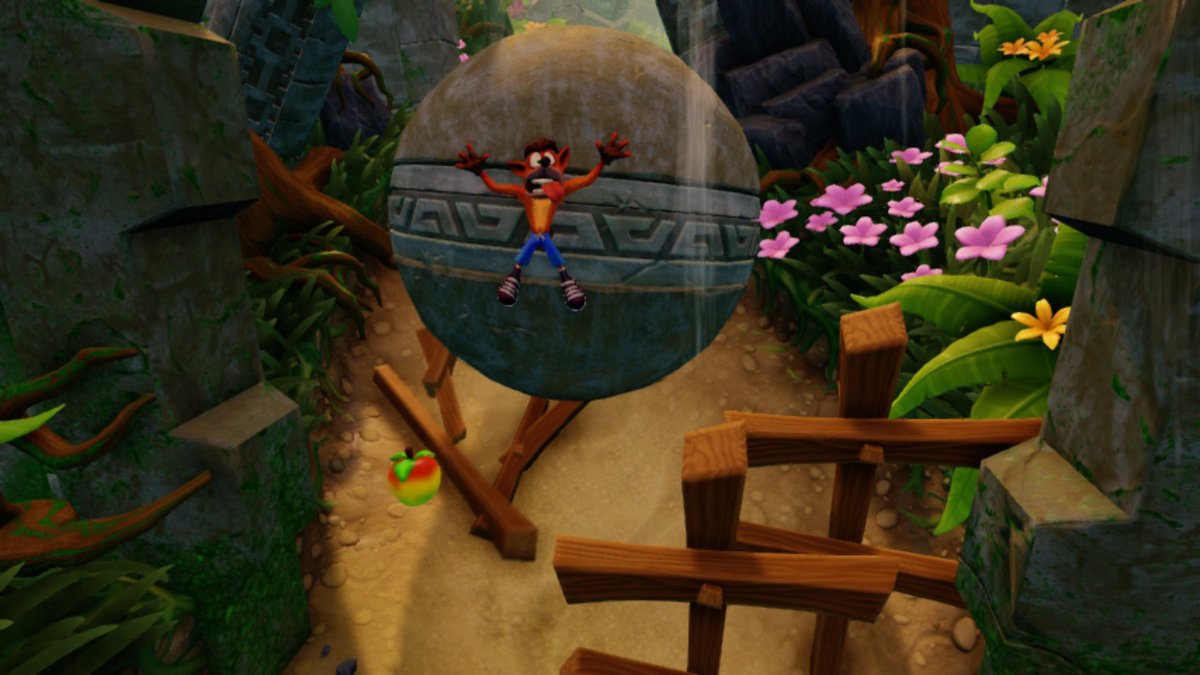 Crash Bandicoot is a gaming icon. Well, he was, back in the 90s. Unfortunately, the PlayStation mascot began to fade into obscurity in the years that followed. Vicarious Visions, discontent with Crash’s decline from stardom, gave the Bandicoot the shot in the arm he needed with the Crash Bandicoot N. Sane Trilogy; a remake of his three chart-topping PS1 classics. While PlayStation gamers were able to jump and spin their way through the Wumpa Islands last year, Nintendo and Xbox gamers were left out in the cold. That is, until now. In 2017, my fellow editor Sean gave this retro revival a glowing review, which you can check out here. However, now that the remastered trilogy is on the Nintendo Switch and I’ve given all three games my undivided attention, I’ve reached a different conclusion than Sean did.

The Crash Bandicoot N. Sane trilogy covers Crash Bandicoot, Crash Bandicoot 2: Cortex Strikes Back, and Crash Bandicoot 3: Warped. While these games all released on PS1, the quality of the each game varies immensely. While Uncharted: The Nathan Drake Collection similarly covered three Naughty Dog games, those were much closer quality-wise than the three Crash titles. The difference between Crash 1 and Crash 2 isn’t particularly huge, but comparing Crash 1 to Crash 3 would be akin to comparing Super Mario Bros. to Super Mario World; the jump is quite large. However, on the surface, all three games have been united by the excellent conversion from PS1 to Nintendo Switch.

All three Crash games have been rebuilt from the ground up, and it shows. The sheer volume of small environmental details and the quality of the music truly sold me on the world Crash exists in. From the fur textures on the various animal characters, to the stunning vistas which stretch over the horizon, the locales here are meticulously crafted. The score is likewise impressive with a great tropical vibe. In fact, I still cannot stop humming the music days after finishing N. Sane Trilogy. However, while all the games have equal visual fidelity, the same can’t be said for the three titles’ core mechanics.

There is very little plot in Crash Bandicoot N. Sane Trilogy; this is really a gameplay experience. That doesn’t bother me in the slightest, as I’m far more engaged by great mechanics than I am by a great narrative. Unfortunately, Crash Bandicoot 1 and Crash Bandicoot 2: Cortex Strikes Back simply aren’t designed well. A game like Super Mario 64, a contemporary of the Crash Bandicoot series, doesn’t control all that well, and the levels are fairly empty. But, those things are offset by the scope and scale of the experience, as well as the gameplay variety. Crash 1 and 2 are as linear and simplistic as possible. That isn’t bad per se, but simply means that the games need to be very well made in order to offset said simplicity.

The first two Crash games fail in two key aspects: level design and control, which are intrinsically connected and are the bedrock of a platformer. When these elements fall flat, the entire experience is in jeopardy. Crash Bandicoot isn’t a typical 3D platformer. Instead, these titles play much more like over-the-shoulder 2D platformers, with traditional side-scrolling gameplay mixed in. Sometimes, the camera is either behind or in front of Crash, and sometimes it is locked in a side-view. This merger of styles helped keep the gameplay fresh by rotating through the three perspectives not only from level to level, but sometimes within a single challenge. The straight 2D sections don’t suffer from the problems that plague the other styles, and as such, these were my favorite of the bunch.

When the camera is locked low around Crash in the 3D segments, it can be very hard to accurately judge the distance of a gap, which often led to me falling directly into it. This problem is accentuated by two factors. Firstly, many of the gaps are so big that only a precise jump could cross them, and secondly, there is often no way to assist your landing in the tougher stages. No level better exemplifies these flaws than the Generator Room, in which you’ll be navigating across very small, very unforgiving floating platforms in a dark room. That last point is important, because the darkness obscures Crash’s shadow, which is your only indication as to where he is. Without that detail, jumps become sheer rolls of the dice. Small oversights like these make many deaths in Crash Bandicoot 1 and 2 feel incredibly cheap. When the core mechanic of a platformer, the jumping, is dissatisfactory, the entire game suffers immensely as a result.

The controls were not consistent enough either to make me feel totally in command. Crash’s main offensive move, his spin, has a very precise hitbox that is often not in your favor. This frequently led to me spinning while inching ever closer to an enemy, nervous that their hitbox would trigger and kill me before I could get to them. I even had an instance where I spun into an enemy turtle, but I didn’t kill him, instead I got killed for the attempt. Crash’s jump felt equally imprecise leaving me often feeling as though I’d easily clear a pit, only to fall right at the edge to my death. One such level, The High Road, where you needed to bounce off of turtles straddling a rickety bridge, was a clear example of both of my issues with the controls. Attempting to flip the turtles was a recipe for the animal’s tail accidentally striking and killing me. This was worsened by the fact that when I did make clean contact with a flipped turtle, it rarely gave me the air I needed to clear the gaps. So, I had to resort to clipping on top of the railing, and cheating my way to victory. I just had very little faith in the mechanics throughout my time with Crash 1 and 2, which made the first two games incredibly hard to enjoy.

Even if I was to excuse these two problems, Crash 1 and 2 would still be rather mediocre. There aren’t that many level themes, and the boss fights are overly simplistic. Cortex Strikes Back attempts to add in more variety with vehicle segments, but they never controlled as well as I would’ve liked them to, and really didn’t add much to the experience. However, both games do offer high replayability, due to the numerous collectibles scattered throughout each level. The main campaigns of both can be beaten in about six hours each, but there is far more playtime in store if you want to go back through the levels with a fine-tooth comb. Of course, your mileage on that front will vary greatly depending on whether or not you can put up with the core gameplay’s flaws.

Crash Bandicoot 3: Warped is a very different story, however. This title is legitimately great. For starters, the level design and mechanical issues that I felt throughout the first two Crash games were almost entirely alleviated. I still encountered these two issues from time to time, but neither problem was prevalent enough to impact my overall enjoyment. The game better understands the difference between movement in a 3D space, and a 2D one. In turn, Crash 3 allows more room to navigate in its stages. This does lend Warped to being much easier than the past two games, but I didn’t see that as a detriment, as the majority of the first two titles’ difficulty is derived from poor level design.

Without these problems, I was able to further appreciate the sheer variety in Crash 3. There are many more level motifs here, ranging from prehistoric, dinosaur-infested jungles to claustrophobic Egyptian crypts. Constantly rotating through scenery helped keep me engaged, especially when these locales allowed for gameplay variety. I was chased by a raging triceratops through the jungle, and collected fireflies to light a path through the suffocating darkness of the Egyptian tomb. Vehicle stages are implemented far better here as well, with improved controls and more forgiving level designs. Whereas the polar bear levels in Crash 2 felt like on-foot missions that a mount was shoehorned into, riding on the back of a tiger across the Great Wall of China in Crash 3 was much more deliberate. There were even plane and motorcycle sequences that were rather reminiscent of Star Fox and Mario Kart respectively, and these truly spiced up the gameplay experience. This title is a night and day difference over Crash 1 and 2, even though it still suffers from the same underwhelming boss fights that plagued its predecessors.

As such, Crash Bandicoot N. Sane Trilogy is a hard game to recommend. The remade presentation as a whole is terrific, and Crash Bandicoot 3: Warped is a totally enjoyable retro platformer. But, the problem remains that the first two games simply aren’t very good. They are hindered by control and level design issues which are simply unacceptable in a straightforward platformer. Even when they’re firing on all cylinders, the first two titles struggle to rise above mediocre. The strength of one game cannot bear the weight of two clunkers unfortunately, making the N. Sane Trilogy a tough sell, especially when there are many great platformers on the Nintendo Switch already.

Abram is an aspiring games journalist with a soft-spot for titles published by a particular company that starts with N, and ends with -intendo. When he's not playing, or writing about, video games, Abram is most likely ranting to no one in particular about various films he's seen, or grabbing the sketchpad to do a bit of drawing.
Related Articles: Crash Bandicoot N. Sane Trilogy
Share
Tweet
Share
Submit