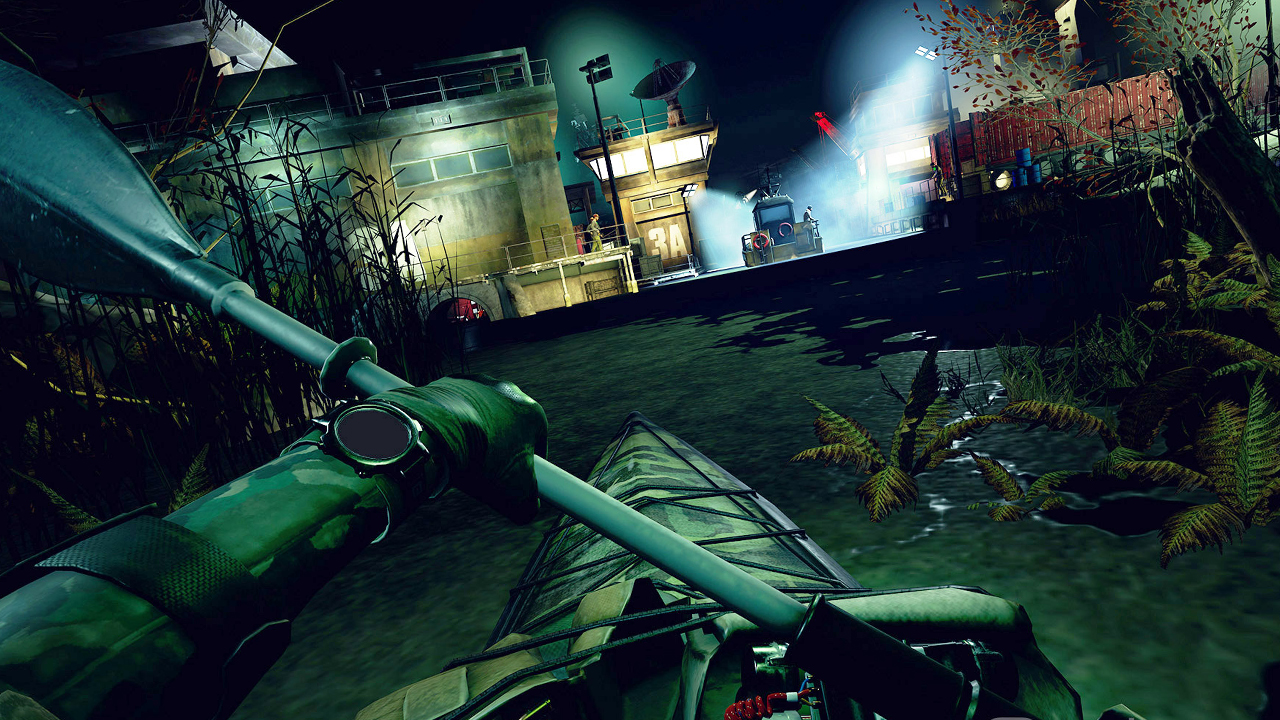 This whole thing is Ubisoft’s fault. We’ve been asking for a new Splinter Cell for entirely too long at this point, and developers like nDreams are done waiting. Their newest VR title, Phantom: Covert Ops, puts you into the stealthy shoes of an elite covert operative dispatched with the task of infiltrating a hostile decommissioned Naval base seized by enemy operatives hellbent on unleashing death and destruction. If you feel like you just fell head first into a Tom Clancy novel, you are right on track.

Exclusively to the Oculus platform (it works on Rift and Quest, is cross-buy, and the saves are cross-compatible) Phantom: Covert Ops is fully built for VR from the ground up. The abandoned military base is fully flooded, meaning they’ve sent you in with a camouflage military kayak with suppressed weapons and a mission. It’s a little far fetched that you never leave the boat, but somehow it works. Within minutes you feel like a stealthy badass James Bond / Navy Seal hybrid ready to take on some bad guys.

Like any good cover operative, you are well-equipped for what lies ahead. Besides your camouflage kayak you have a pistol, submachine gun, and a sniper rifle — all suppressed for quietly dispatching your foes. In addition, you have a pair of night vision viewfinders (they don’t have magnification, so they aren’t binoculars) with augmented reality functions to spot enemies, identify targets, and pick up possible distraction opportunities or objectives. As you progress, you’ll get different weapons and tools, but I don’t want to ruin the surprise.

The core gameplay loop in Phantom: Covert Ops is, as you might expect, stealth. Carefully paddling from one reed patch to another, avoiding searchlights and cameras, and generally being very careful about sightlines and noise. Splashing while you paddle will get you caught, as will leaving dead bodies, so like any good stealth title you’ll need to work with the shadows. To aid in this, your kayak has an embedded radar system that will tell you when you are hidden or exposed, and from what direction you might be being spotted. Not unlike a Splinter Cell or Metal Gear game, however, you’ll sometimes need to go loud.

Enemies in the game have a patrol pattern that won’t take long to discover, but they do keep an eye on one another. You can’t hide the bodies, so you’ll want to make sure you tag them when they won’t be seen. The pistol strapped to your chest is good for short range encounters, and you’ll have the most ammo for it at your disposal. On your back is a submachine gun, but if things go that sideways it tends to be a “spray and pray” weapon. My personal favorite is the sniper rifle along the right length of the boat. This long rifle is held aloft with one hand, supported by your other, and you’ll have to adjust your position to the scope to create your sight picture. It feels as much like a rifle as you need in a game, and is incredibly immersive to pop off a high value target from a distance without alerting his friends. That said, if you get spotted you’ll have a brief moment where the game slows down, giving you a split second to take out whoever has seen you before they raise the alarm.

Using a blowtorch to cut open a panel is just one of the many tactile and immersive ways that Phantom: Covert Ops pulls you in. Traversal is handled with two hands, pulling at the water with a paddle as you alternate between left and right sides. Digging your paddle in deeper lets you cut a corner more quickly, or you can use it to brake or even reverse. It feels very natural and it’s intuitive enough to require no instructions, even for VR newbies.

Later in the game you’ll revisit some of the earlier levels, albeit with different challenges and opportunities like mines and cameras. It does a decent job of masking the linearity of the game, though a central hub and spoke mission system could have easily worked to provide consequences in a larger campaign — maybe we’ll see that for the sequel.

As you’ve seen in the video above, the game is absolutely gorgeous. The Unreal Engine provides beautiful water that reacts to your movements, lighting that would be at home in a non-VR title, and environments that serve the game well. Phantom: Covert Ops is easily one of the best looking games on any VR platform.

I really only have one major complaint (and one minor one) with Phantom: Covert Ops — I simply can’t play it for very long. My wife has a cast iron skillet for a stomach, completely unphased by any motion sickness issues, but I suffer badly from VR motion sickness. Despite being powered by a 2080 Ti (so I know I’m getting more than the required FPS for smooth motion) and having all of the comfort options turned all the way up (snap turns, vignette modes), I could only play the game for 15 minutes before I felt nauseous and had to lay down with a fresh headache. My wife, on the other hand, sat down and whipped through the four to five hour campaign (across seven missions) in just two consecutive plays. If you’ve got good VR callus, you’ll probably be fine, but despite loving every bit of this game, I’ll have to play it in very, very small doses.

My other minor complaint is that the game can be somewhat formulaic in spots. You’ll paddle in, mark all the guards and objectives with your AR Viewfinder, use the distractions to create your path, and do it all over again when you reach the next area. That said, there’s nobody saying you have to play the game in any predetermined way, so feel free to wipe out everyone in the area if it suits you.

Beyond the campaign, there are several modes, as well as a few unlockables and a leaderboard. Free Play is precisely what the name suggests, allowing you to return to any previous level to try to improve your score (after every mission you are given a rating based on the number of times you died, were spotted, how many people you killed, how fast you completed it, and more). Completing the levels with a B-rank or higher, finding collectable crocodiles hidden in the levels, or other milestone objectives unlocks more than a dozen challenges focusing on specific game mechanics. These can be things like high speed kayak courses, target practice, or just murdering everyone in the entire level. There are even a few cheats you can enable such as low gravity, unlimited ammo, and others to keep you coming back for more. These also provide audio logs to further reveal the narrative arc for those skilled enough to find them — I just wish they were folded into the campaign at large, instead of tacked onto the end.

nDreams has succeeded wildly with Phantom: Covert Ops. The visuals are gorgeous, the goofy premise works perfectly in context, and the mechanics are an intuitive and downright rewarding use of VR. While you may need a great deal of VR callus to deal with the smooth motion of the game, Phantom: Covert Ops is VR stealth done right.

Ron Burke is the Editor in Chief for Gaming Trend. Currently living in Fort Worth, Texas, Ron is an old-school gamer who enjoys CRPGs, action/adventure, platformers, music games, and has recently gotten into tabletop gaming. Ron is also a fourth degree black belt, with a Master's rank in Matsumura Seito Shōrin-ryū, Moo Duk Kwan Tang Soo Do, Universal Tang Soo Do Alliance, and International Tang Soo Do Federation. He also holds ranks in several other styles in his search to be a well-rounded fighter. Ron has been married to Gaming Trend Editor, Laura Burke, for 21 years. They have three dogs - Pazuzu (Irish Terrier), Atë, and Calliope (both Australian Kelpie/Pit Bull mixes).
Related Articles: Phantom: Covert Ops, VR
Share
Tweet
Share
Submit