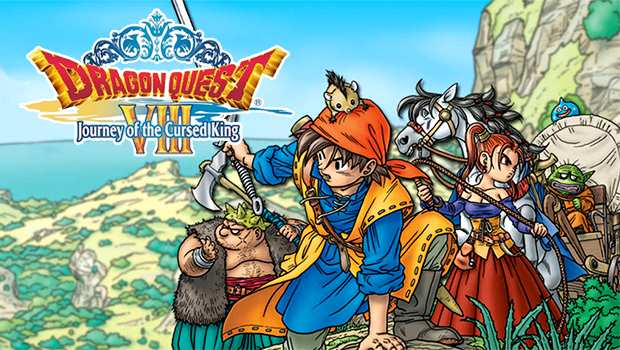 Some games are classic and ageless, standing the test of time, and shining bright remake after remake. I desperately want to say that Dragon Quest VIII: Journey of the Cursed King is one of those titles, but it somehow falls just short. It has a long, winding plot, some memorable characters, a host of colorful monsters, and a plethora of side quests and features, yet at the end of the day seems to be better described with a simple shrug. The 3DS remake of DQVIII comes loaded with more content and gameplay than the already impressively long original release. It also includes two more teammates to recruit, the ability to take and share pictures, an entirely new dungeon, and the option to speed up battles. What hasn’t changed are the classic quirks and charm native to the Dragon Quest series, and the Cursed King’s journey is still overflowing with unique characters and diverse creatures to do battle with.

Your journey follows a silent hero on a quest to track down the evil wizard Dhoulmagus. This jester from hell single handedly laid waste to an entire kingdom, cursed your traveling companion and liege lord, King Trode and his daughter, and continues to spread death, ruin, and suffering as he travels the world. The plot flows smoothly, though it does occasionally feel like you end up doing a great deal of backtracking. You need to enter this temple, but you must first locate a magical artifact to unlock it. No sooner have you retrieved the artifact then you discover that it’s lost all its magic and you must go on yet another quest to re-infuse it. On paper, the plot has everything necessary to craft an epic and captivating story, yet in actuality, the plot meanders along without provoking a great deal of emotion or suspense.

Hmmm… there’s one logical option here. I should do something else.

There is also a lot of odd logic within the game. You are granted one wish by a magical being, but instead of using that wish to do away with the evil, murderous Dhoulmagus, you use it to give a grieving king a vision of his departed wife. When your party needs to sail across the monster-infested sea, rather than heading to a port town and offering to hire and protect a ship from monsters, as you had done previously, your team decides it’s best to wander into the middle of a landlocked desert and investigate a ship which has been left to rot on dry land for centuries.

One thing I simply cannot praise enough about this game is the stellar voice acting. Every bit of plot, every significant scene, and an impressive portion of of the less important scenes play out with some truly stellar talent. A couple of characters also stand out: King Trode has plenty of potential to be annoying and hateful, but his delightfully over the top voice acts like a balm, turning him into a hilarious and endearing character. And then there’s Yangus. Your first teammate, Yangus is a soft-hearted brute-gone-good who is ever creeped out by King Trode. He’s not the brightest, and his cockney accent is often confoundingly thick, but he’s powerful in battle, loyal to a fault, and I love him with the same mad affection I have towards my beloved Team Skull idiots in Pokémon Sun and Moon. While the other characters within the game are interesting, I couldn’t help but feel that my team consisted of the silent hero whose role I took on, King Torde and Yangus; everyone else was just tagging along.

The Dragon Quest series has long relied upon the rather dated mechanic of save points, allowing players to save their progress only when stumbling upon one of these locations. Churches have the save points of choice, and every DQ fan knows the overwhelming frustration of needing to quit the game while being stuck inside a dungeon. Thankfully, Dragon Quest VIII introduces a quicksave feature which allows players to leave and return to their game at any point. This is a very good thing, because you’ve got a lot of ground to cover.

Dragon Quest VIII is very long, almost oppressively so, with the main game easily taking more than 50 hours to complete. When you factor in building monster teams and battling it out in the arena, sidequests, tracking down mini-medals, and mastering alchemy, it’s easy to pour more than 100 hours into this particular title.

Along the way, you will have to beat down countless monsters and plenty of bosses. Battles are turn based, and you can either issue commands for the entire team before each round, or use the tactics menu to collectively or individually instruct each team member on how you would like them to fight battle. Issuing blanket commands like ‘fight wisely,’ ‘don’t use magic,’ and ‘focus on healing,’ rather than giving each character individual orders, can shave off a lot of time when grinding… and you will be grinding. And grinding. And grinding…

However, the tactics menu actually proved to be a pretty wise way to fight, as the AI will react to low health, deaths and status effect within the same turn, whereas you would have to wait until the next turn if you were issuing commands manually. On countless occasions I watched Jessica, my character with the lowest defense and fewest hit points, go from mostly-full health to being KO’ed by a powerful boss move. No sooner had her body hit the ground than the next character cast a spell to revive her. Had that character been ordered to follow my commands, poor Jessica would have stayed dead for at least another three moves until I could issue commands again.

The monsters within this game are diverse, quirky, colorful, and often downright strange. Hideous monsters with fangs and deformed faces glare at you from across the battlefield, then break into the dreaded “Sultry Dance,” a move which causes your teammates to ‘catch the dancing bug’ and miss their turn because they can’t stop dancing long enough to attack. You can even unleash your own sinister dance move, the “Underpants Dance,” a performance so shocking that it will literally knock your opponents off their feet and leave them stunned for a round. One boss battle turned out to be a giant spoof on the song Get Up (I Feel Like Being a) Sex Machine, complete with a James Brown sound-alike voice actor. These kinds of completely ridiculous, laugh-out-loud moments help make the Dragon Quest series so incredibly unique.

There are no class systems within Dragon Quest VIII. Instead each character is able to use a number of weapons and each has a single discipline into which they pour stat points. Upon leveling up, characters receive a certain number of skill points that can be distributed among weapons or to further advance their discipline. Because points are limited and all draw from the same pool, it’s best to decide early on which weapons to equip, and have your characters reserve all their points for that weapon and the character’s discipline.

DQVIII features a host of zany, colorful monsters to battle against

While most every game or story relies on one trope or another, Dragon Quest VIII leans very heavily on some very dated plot devices, especially where the main female character, Jessica, is concerned. Jessica’s discipline is Sex Appeal, and upon adding points to it, you are informed that Jessica is learning how sexy she can be. Her skills become even more strange when, once leveled high enough, she becomes so sexy that monsters become ‘enamored with her fine form’ and are unable to attack in battle. Getting to take a turn without damage is always a perk, but it’s just odd when inhuman monsters become enamored. I never thought that a giant wasp would be so focused on where he wants to put his stinger that he would forget to actually use it. It’s ridiculous and fairly minor, but it’s just too strange to forgo commenting on.

It’s also worth noting that this release does not include the fully orchestrated soundtrack which Japanese audiences received, and that Dragon Quest VIII does not make use of any 3D features. However, there is an impressive amount of detail in the simple animations within the game. You stoop, lift up, then crouch under the weight of the pots you’re about to smash, run your fingers across the spines of books, and even flip through pages as you read. When stepping into tunnels and dark areas, you carry a torch. While it may lack a symphonic soundtrack, these small details add a sense of care and refinement to the overall experience.

Dragon Quest VIII is a massive world with well over 50 hours of gameplay. It stands out thanks to stellar voice acting and a huge, quirky set of monsters to battle. While there's plenty to do, both the plot and the majority of the characters are flat and uninteresting. The quicksave feature and the ability to increase battle speed are significant quality of life improvements over the original, making this a solid title sure to entertain JRPG fans, but the dated and grind-heavy mechanics can make it a bit of a slog.