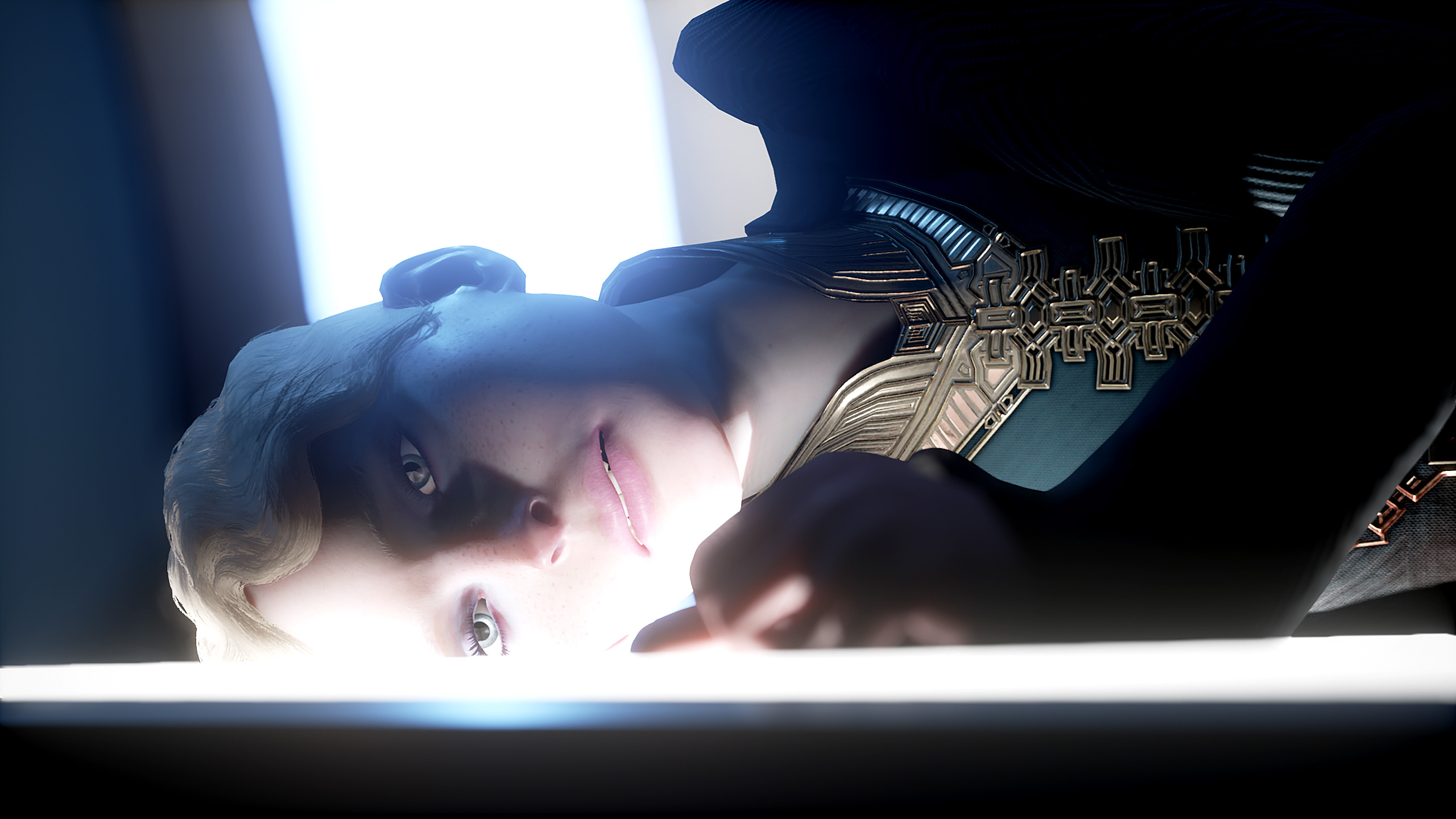 Imagine being on a fully artificial planet covered in ornate and massive buildings in search of a way to bring someone back to life. Then as you are walking down a hallway, the lights go off and the buildings start turning against you. Something sends murderous clones of yourself that learn from what you do to find and kill you. This is what it is like to play Echo. In gaming, it is extremely rare for a game to show me something that I have never seen in some way or another, but when playing Echo by developer Ultra Ultra and seeing my clones learn and react to how I played, I felt like I was experiencing new and different things almost throughout the entirety of my playthrough.

Echo is a sci-fi game about a girl named En and her A.I. companion London who have traveled across space to reach an artificial planet in the hopes of bringing a man named Foster back to life. upon reaching the abandoned planet and repowering it, En learns that the planet is generating copies of her called Echoes. The Echoes of En change depending on what she has done during the previous time that the lights were on; they go off after copying a few of your actions. For example,if you open a door or slide over a table, the Echoes will be able to do that during the next light phase, which leads to some very interesting and strategic gameplay. I found myself trying very hard to avoid doing certain things during the light phases to prevent the Echoes from being able to do them as well. This presented its own challenges as I might have had to then take a longer route through a section in order to avoid using an elevator, since they would exploit said elevator to kill me. I would also do things like play a piano or eat grapes, which would cause the Echoes to do it in turn; changing their paths and distracting them. This felt like quite the achievement when it worked out perfectly and I was able to stroll right by the Echoes.

Describing what kind of game Echo is can be hard to do because it changes throughout the narrative. When the game begins, it is mostly a narrative driven sci-fi game. Almost all of the first hour of the game is spent walking around while hearing conversations between En and London. As the game progressed, however, it changed into a puzzle game, then a stealth game, and then it wound up reminiscent of a horror game towards the end. These changes in style were spaced out impressively well and made it so that as soon as I started to feel as if I knew everything the game had to offer, it changed just enough to reclaim my attention and keep me entertained. I was especially taken aback by the change into horror, suddenly using stealth was less of an option and more of a requirement to get pass the levels, which gave me more than a few tense moments.

That said, at its core Echo it is a stealth game as that is what I spent most of my time focusing on. I would be hard pressed to find a game that has been able to get me to use as much stealth as I did in Echo. Usually when given the option to fight or hide I just run in guns blazing but that never felt like the right thing to do in Echo. While blasting your way through sections with your pistol is definitely an option, I just had more fun inching my way through each level while carefully sneaking up on the Echoes to take them down. While occasionally I did start running and gunning my way through, it was usually due to being seen by an enemy and more often than not it didn’t turn out all that well for me.

I was pleasantly surprised with the world Echo is able to create. The game’s story takes place in a very compact section of what sounds like a vast and interesting futuristic world. While the game’s cast only consists of En and London, they paint a fantastic picture of what the world looks like in their universe outside of the confines of what was being presented. Conversations about advanced A.I. and space mercenaries brought to life the world that we never got to see much of and made me want more of it. This made the game come off as much bigger than it actually is and got me to fully immerse myself in its reality.

Rose Leslie and Nick Boulton did an incredible job of portraying the characters of En and London. Without their performances, Echo would largely feel lifeless and dull. Every line was delivered perfectly and came off incredibly real and passionate which made both En and London feel like such amazing characters that I could actually see them as big name characters like Cortana and Master Chief if given the chance. With Rose Leslie coming from Game of Thrones, I expected her casting to be just a celebrity hire and less about being well suited for the role, but as soon as the game started I knew I was wrong as she completely blew me away and turned in one of my favorite voice performances of the year.

While Echo did some fantastic and original things, it also leaves a little bit to be desired. While Echo tried to fix its repetitive nature with the great pace changes I mentioned earlier, it usually happened a tad too late. Right before each change would take place, the game hits a lull due to the lack of variety in the environments and puzzle types. Every area appears very similar to the last with only a few different color variations to show any noticeable change in the area at all. As far as puzzles go, there were only about four different types that needed to be completed to move on. I eventually knew what to expect from these and found myself becoming disappointed when an interesting and new floor plan would end up having the same used up puzzles with virtually no variation other than scale.

Echo is a game that presents some very original and interesting game mechanics while creating an enjoyable and full world. The characters of En and London were brought to life expertly by Rose Leslie and Nick Boulton. A lack of diversity in the game puzzles and environments drag it down a little but the changes in style save it from becoming bland and make Echo a very enjoyable experience.

Zach has been a gamer ever since he picked up a PS1 controller and played Asteroids for the first time. From FPS games to Point-and-click adventures, Zach knows no genre that he can't get into. When not playing games, he spends his time looking at the newest computer components on the market and dreaming of a day when he can buy them.
Related Articles: ECHO
Share
Tweet
Share
Submit