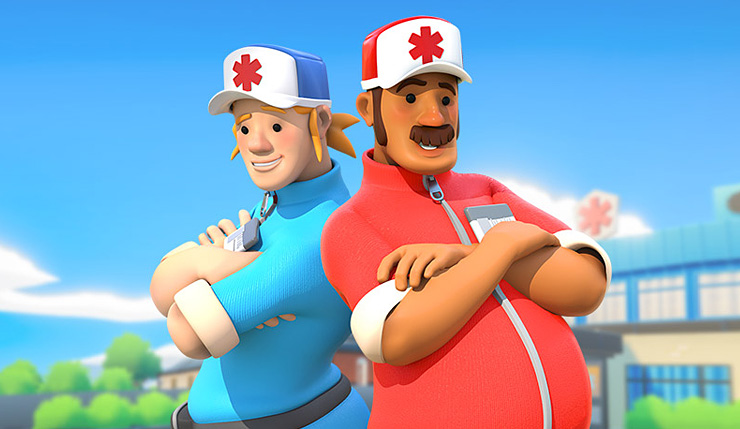 The Switch has proven itself a breeding ground for novelty cooperative experiences, and The Stretchers joins the fold as a creative exploration of some simple mechanics. You and a friend will take on the role of two ambulance drivers, zooming around several areas as you race to reach afflicted citizens in time and get them back to the hospital. Utilizing cartoon style visuals and quirky gameplay, The Stretchers doesn’t last very long but does fill its runtime with routine innovation, iterating on its own ideas to provide an engaging experience.

The story is functional, if not much more. It seems Captain Brains, formerly one of your own organization, is using mad science devices to cause citizens to become Dizzies, leaving them incapable of controlling their actions. It’s clear that the developers are attempting to sidestep the real world issues of violence and horrific mutilations that EMTs have to deal with in order to deliver a more family oriented experience. Watching the character’s antics is humorous, brought to life as they are by the game’s inviting visual design. The Stretchers may not have the most unique appearance, but its exaggerated shapes and welcoming style do contain a lot of charm, and clearly delineate important features of the characters and landscape. 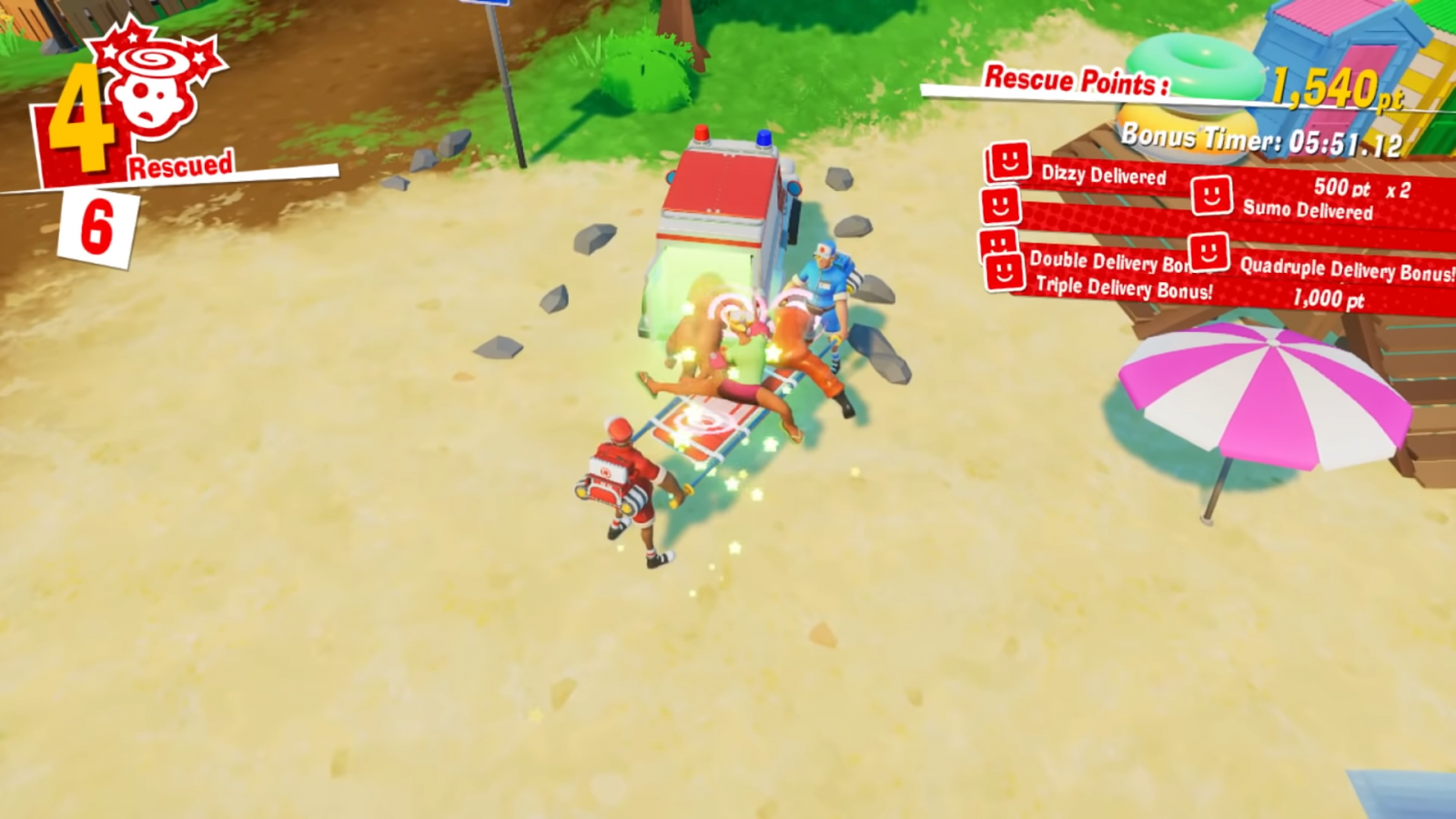 That delineation is important, as much of the gameplay is context sensitive. While you are on foot, the controls are fairly simple: your characters can move, grab, release, and crouch, and they must do so in tandem to pick up Dizzies, place them on a stretcher, and get them back in the van. You see, while you can move an object without assistance, you will move significantly more slowly. Time is a major factor in success, so failing to work as a team will hurt your results. You can also clap or hum, which have context sensitive effects, such as triggering angry pigs to charge towards you, which have applications in solving puzzles necessary to progress.

These controls may seem simple, but over time you will see them put to increasingly creative use. While the beginning of the game focuses on you placing Dizzies on the Stretcher and getting them back to your ambulance, you will find yourself using two person lawn-mowers, sawing down trees together, jumping on trampolines, and more as the game progresses. If you venture towards the side missions, you will find more novelty as your journey progresses.

Those side missions tie into the other focus of the game: racing around in the ambulance, navigating the game’s several areas to find main and side missions. The driver will be in charge of getting you from place to place, as you slosh around in the unwieldy machine, and your copilot will assist with upgrades you obtain along the way. The exploration has mild (and I stress mild) metroidvania elements, as you use upgrades to let you access new cosmetic items scattered around the levels. There are some creative hiding places for secrets scattered across the levels, even if the rewards themselves are minimal. 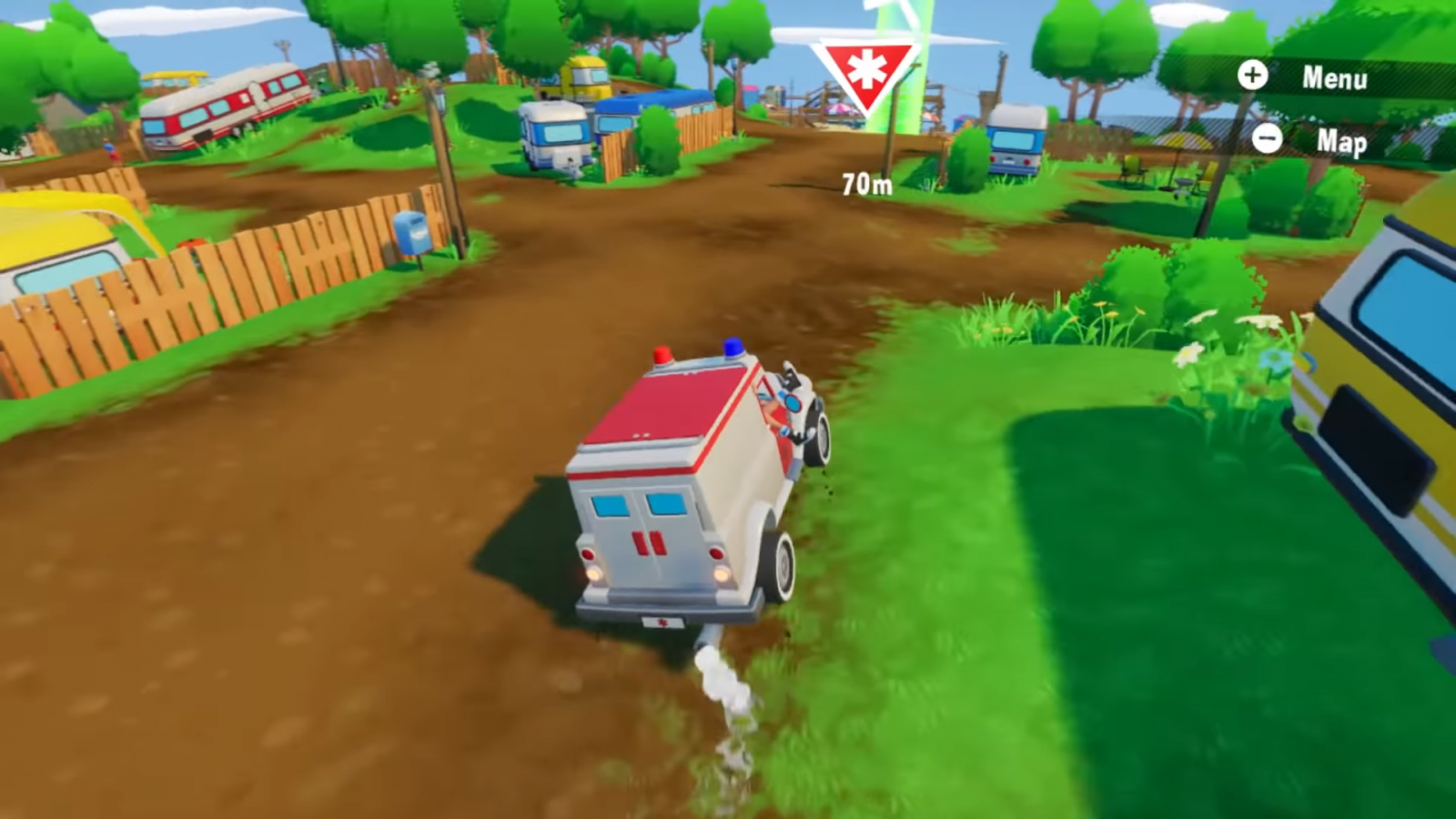 The controls do bring some issues along, however. Because they are so context sensitive, it is important for your hands to stick to exactly what you intend as you play. For instance, the basic task of getting a person onto the stretcher, and then moving that stretcher, requires specifically grasping the hands or legs, releasing them, and doing the same to the stretcher. However, more than often you will find the game lacking in precision, forcing you to stop and readjust until you can accomplish your basic goal. As time is the main balancing factor, you will find yourself frustrated with it with some frequency. This does add to the experience at times, as you and a friend scrabble to keep hold of your objectives, racing against the clock, but at other times it does feel closer to a bug than a feature.

The Stretchers also features a bite sized runtime of around four hours depending on your speed and desire to explore. Beyond the pure experience of the game, there isn’t much reason to replay it. There is a points system, but it’s unclear how these accumulate, and you may find ways to gain points later in the game that weren’t spelled out before, and you may decide it’s not worth it to go back for those minor goals. There are some achievements and cosmetic items to pick up along the way, but I didn’t find these compelling reasons to 100% the game. All that said, with a price tag of $20 it’s hard to begrudge a smaller game that does its best to explore its own possibilities. 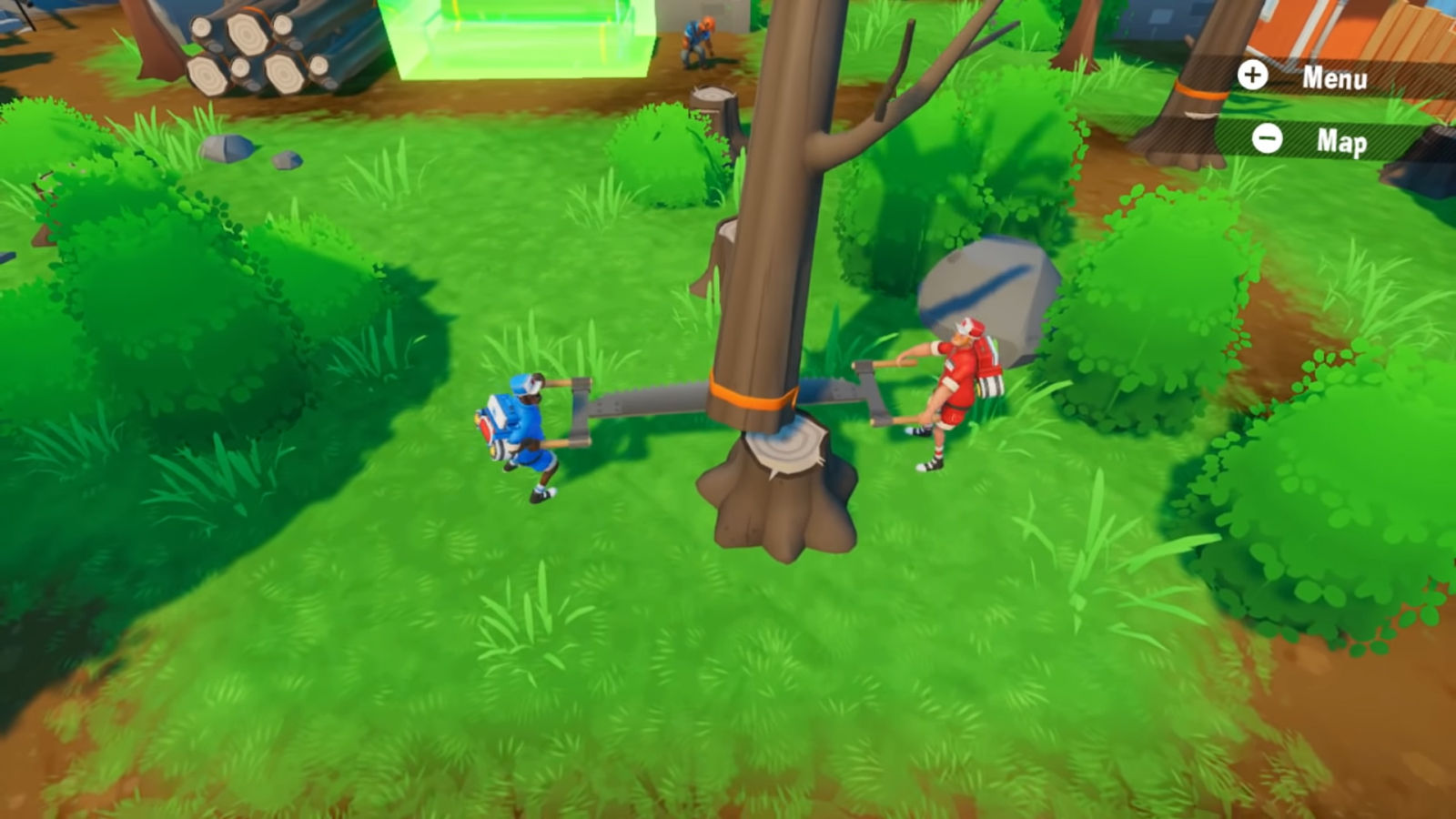 The Stretchers also contains a solo mode, but I would be surprised to hear that anyone found it a worthy inclusion. Playing on your own is a struggle against your own basic instincts. Each hand has to control a different EMT, each of whom move independently of one another, and who often have to spin and change orientation as they carry stretchers together. I’m willing to admit that it might be my own inability to adapt (and notorious lack of patience) but I found the solo experience untenable past a certain point of difficulty. Given how imprecise the controls can be, you’ll find the charm of missing a grab and sending someone ragdolling down a flight of stairs frustrating immediately, rather than eventually. The game does contain AI, but they are best left ignored, as their intelligence is not sufficient to get the job done. The solo mode feels like an afterthought, and with a game that doesn’t allow for online play and essentially only works with two players, The Stretchers does limit its own appeal.

A few new options open up once you have beaten the game, such as a time attack mode, but the real drive to get you back in is how much you enjoyed the game at its core. With the right friend and the right mentality, you will have a great few hours with The Stretchers, if not much more.

The Stretchers may not be the deepest experience, but its creativity comes through in spades, giving you a great challenge to experience with a friend. Its solo mode doesn’t function well, the game is overall fairly short, and the controls are not always reliable, but the game manages to pack so much into its runtime that you may not find yourself caring.

John Farrell is a legal aid attorney specializing in domestic violence, living in West Chester Pennsylvania. You can listen to him travel the weird west as Carrie A. Nation in the Joker's Wild podcast at: https://jokerswildpodcast.weebly.com/
Related Articles: The Stretchers
Share
Tweet
Share
Submit