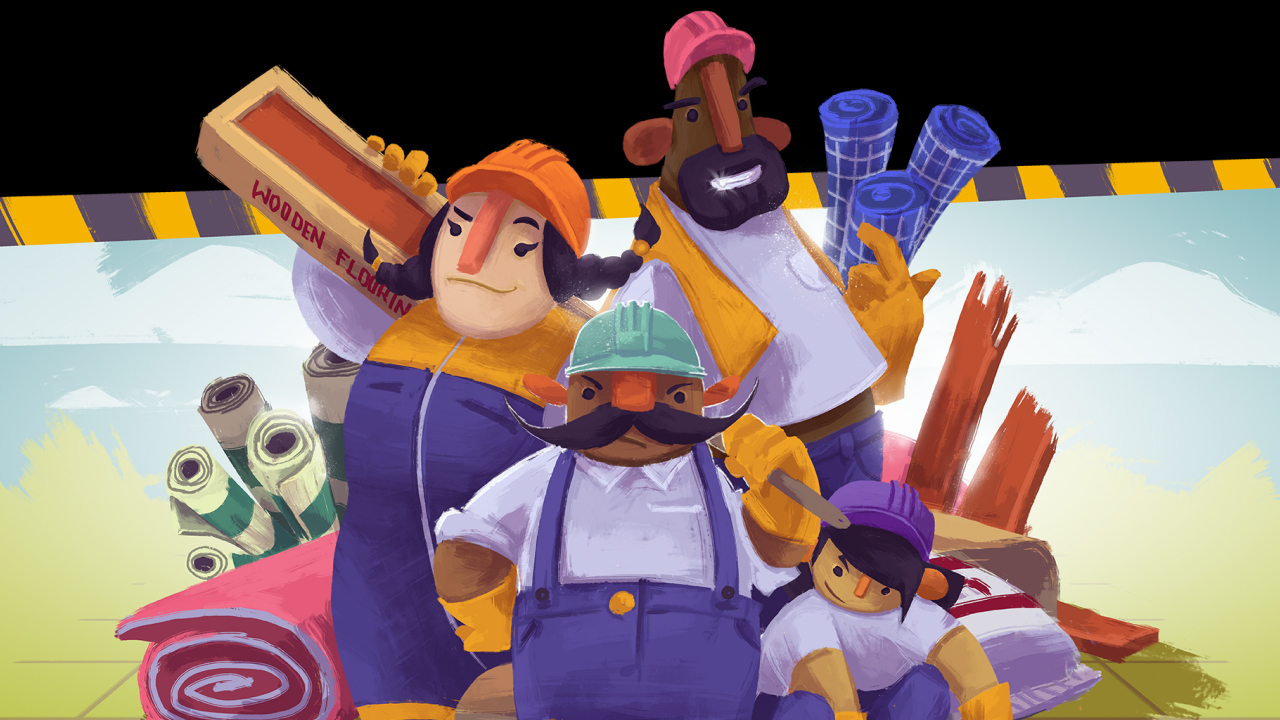 “Hey you’se guys, tear up that carpet, spackle that wall, paint it pink, and get it done quick! Be careful, stop spillin the pink paint, and watch out for the hallway that’s made of ice for some reason!” Being a contractor is hard work, but they say that many hands make for light work. Teaming up with three of my friends, we set out to test that theory in Tools Up!

Tools Up! is the latest four player cooperative game from The Knights of Unity, the team behind PC Building Simulator, Sythe, GWENT: The Witcher Card Game, and Disco Elysium (our review) to name a few. In it, you’ll team up with your buddies to renovate the homes of a tower full of tenants, all while trying your best not to murder your friends in real life. It’s cooperative, it’s chaotic, and guaranteed to cause a little bit of cussing. Let’s dive in.

The premise starts off simple enough. One player at a time can pick up the blueprint, which shows what needs to be done, also granting them the ability to rotate the camera to make sure every nook and cranny is painted. The other folks wobble off (everyone in this game totters around like a Weeble Wobble) to grab paint buckets, a recycling bin, glue, or whatever else is needed to accomplish the job. Quarters are close, furniture is heavy and needs to get moved, paint gets spilled, people start slipping, somebody accidentally rips the door off the hinges, and everything has to be fixed and done inside the scant five minutes the customer has allotted. It’s a tough gig, but that’s why you brought friends, right?

Oh my sweet merciful Cthulhu…why did I bring friends? Not unlike Overcooked, adding more people adds more hands to do the lifting, but also makes it a whole heck of a lot more fun. Dragging a couch solo is slow going, but picking it up with a friend gets it done quicker. As levels progress, you’ll not be able to tackle a job solo as easily, so teaming up becomes even more important. As an example, you might need to put up new wallpaper. Having somebody throwing glue on the wall while the other one follows behind and pastes up whatever gaudy color and pattern the client wants, before the glue dries, might help you beat the clock. As the amount of work stacks up, that’s when throwing things begins.

When you are doing renovations, you can only tear up one thing at a time. That means either hauling out to the recycle bin outside, or dropping your stuff in a bucket. After a while the bucket fills up, and you’ll have to haul it out and empty it. Meanwhile, that back and forth traffic makes it harder to get in and out of the few doorways in the house. That means it’s time to start hurling carpets and buckets over the walls!

Like other cooperative multiplayer games, the idea here is to assign renovation tasks to individuals or pairs and then try to stay out of each other’s way. After a few basic levels, you’ll need to step up your game. Instead of having your supplies at the ready, they may need to be delivered partway through the level. Maybe they’ll be floating in the stream that borders the room. Maybe there will be lava to contend with. And just maybe you’ll have multiple blueprints to juggle. No matter what the challenge, just like other cooperative games, speed, divvying up the work, and staying in your own lane is the name of the game.

Tools Up! is a cooperative game, and we did start off our adventures with four, so I was eager to try the game with just two players to see if the game adjusts. I figured there would be a longer clock, or easier challenges, but there isn’t. Surprisingly, simply removing the chaos of two additional players made the levels more manageable. I guess more hands doesn’t necessarily make for lighter work after all.

Beyond the campaign mode, there is a party mode which changes things up. While the levels are the same, the clock counts upwards. Instead, you compete on time. This removes the barrier to entry for new players as it clears the failure conditions. It makes pass and play possible.

Once you do pick up and play a bit, you’ll find the one glaring thing with Tools Up! that is harder to fix. The challenge at the upper level isn’t that much higher than those in the midgame. Other four player co-op contemporaries ramp in difficulty quite a bit, with the latter levels taking some real focus. I guess I’m saying I’m ready for more Tools Up! but with a little more challenge.

There is one other area of Tools Up! that needs a little spackle. Being too close to the walls can occasionally make selection finicky, costing precious seconds. It’s a minor nit amidst a whole lot of fun. An upcoming patch promises UI improvements and some bug squashing, so it’s likely on the list to get repaired.

While Tools Up! isn’t revolutionizing the cooperative play genre, it gave my friends and I every reason to charge up four controllers and start yelling at one another for fun. Whether it’s rolling carpets, gluing up wallpaper, or arguing over who spilled the paint (AGAIN), Tools Up! is a must have.

Ron Burke is the Editor in Chief for Gaming Trend. Currently living in Fort Worth, Texas, Ron is an old-school gamer who enjoys CRPGs, action/adventure, platformers, music games, and has recently gotten into tabletop gaming. Ron is also a fourth degree black belt, with a Master's rank in Matsumura Seito Shōrin-ryū, Moo Duk Kwan Tang Soo Do, Universal Tang Soo Do Alliance, and International Tang Soo Do Federation. He also holds ranks in several other styles in his search to be a well-rounded fighter. Ron has been married to Gaming Trend Editor, Laura Burke, for 21 years. They have three dogs - Pazuzu (Irish Terrier), Atë, and Calliope (both Australian Kelpie/Pit Bull mixes).
Related Articles: Let's Play, Tools Up!
Share
Tweet
Share
Submit