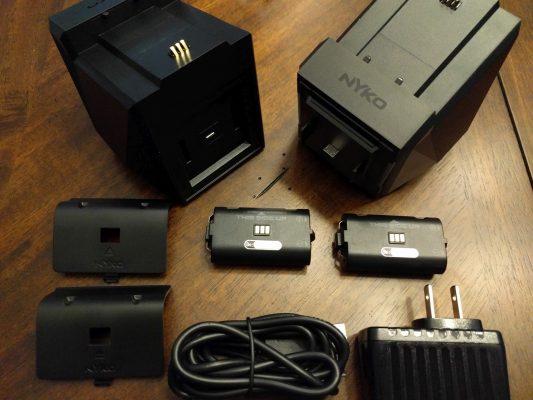 I’ve got a cord problem. Xbox One, PlayStation 4, PSVR, PS Move, Rocksmith guitar cords, Rock Band legacy adapters – everything I own wants to consume at least one USB port for charging or connectivity. Keeping controllers charged without fiddling around in the back of the system is a challenge. Some companies sell odd little trees for you to plug your controllers in for charging, but it still means you’ll need two of them to cover both systems. It also means running power to two power outlets, which can be even more challenging when your systems reside in an entertainment center.

Nyko is solving the cord kudzu and power problem in one fell swoop.

Just in time to add another set of cords to the mix with the PSVR unit, Nyko is simplifying charging with a modular block the company calls the Nyko Charge Block Duo.

“Duo” is a bit of misnomer as these modular blocks can be extended. The front of the block pulls off to reveal a port that can be used to daisy chain them to another Block Duo. Knowing I wanted to solve the charging problems for both systems in one fell swoop, I snapped up two of them.

As you can see below, putting the two together creates a nice chain that can be charged off of one micro-USB power cord. A closer look reveals their individual charging methods.

Nyko’s method for inductively charging the DualShock 4 is the addition of an unobtrusive tab that plugs into the micro-USB connector on the rear of the controller. The controller, straddling the small block, is charged without the need to plug in another cord. If you only plan on charging one controller at a time, you can pick up the Solo version of the Charge Block for $14.99, with the Duo costing $24.99.

The Xbox One controller, given its removeable battery situation, is handled slightly differently by the Nyko Charge Block Duo. Instead of using a pair of AA batteries, the Duo provides a rechargeable 1200 mAh lithium ion battery pack. Previous efforts from Nyko provided a cord that could be plugged into the rear of the pack for charging. The Duo provides the same replacement backplate, but this time it exposes three contact pads for induction charging. Once again — no cords. As a result of the extra battery, the Solo costs $19.99, with the Duo predictably at $29.99.

The added bonus for the Charge Block Duo is the charging cable itself; as I said before, it is a micro-USB connector. On the other end is a standard USB connection, meaning you can either plug it into your system for pass-through charging, or you can use the included adapter to plug it into a powerstrip or outlet.

Of note, if you intend to use more than one charge block, you’ll need more than the paltry 500 mA of power provided by USB 1.0 and 2.0. USB 3.0 pushes this to 900 mA, allowing power for all four blocks simultaneously — something no other charging station can brag about.

At the end of the day, when you are done gaming, you simply place the controller on top of the inductive pads. To indicate status, there is a blinking white light on the surface that shows that your controller is being charged. When it stops blinking, you are ready to jump back into the action with a full battery.

Xbox One and PS4 living together? Heresy!

If there are any negative aspect to this product, it’s that you don’t actually need the Nyko Charge Block. You can fumble with cords for the PlayStation 4, and you can buy rechargeable batteries for the Xbox One — both are perfectly viable. That said, cleaning up the cord catastrophe in my entertainment center, and the smile on my wife’s face, made it worth every penny.

The holidays are upon us, and that means some long gaming sessions with some of the best games of the season. Having an easy way to charge my controllers without fighting with cords and clutter make the Nyko Charge Block a must-have for any gamer.

Ron Burke is the Editor in Chief for Gaming Trend. Currently living in Fort Worth, Texas, Ron is an old-school gamer who enjoys CRPGs, action/adventure, platformers, music games, and has recently gotten into tabletop gaming. Ron is also a fourth degree black belt, with a Master's rank in Matsumura Seito Shōrin-ryū, Moo Duk Kwan Tang Soo Do, Universal Tang Soo Do Alliance, and International Tang Soo Do Federation. He also holds ranks in several other styles in his search to be a well-rounded fighter. Ron has been married to Gaming Trend Editor, Laura Burke, for 21 years. They have three dogs - Pazuzu (Irish Terrier), Atë, and Calliope (both Australian Kelpie/Pit Bull mixes).
Related Articles: Nyko Charge Block Duo
Share
Tweet
Share
Submit