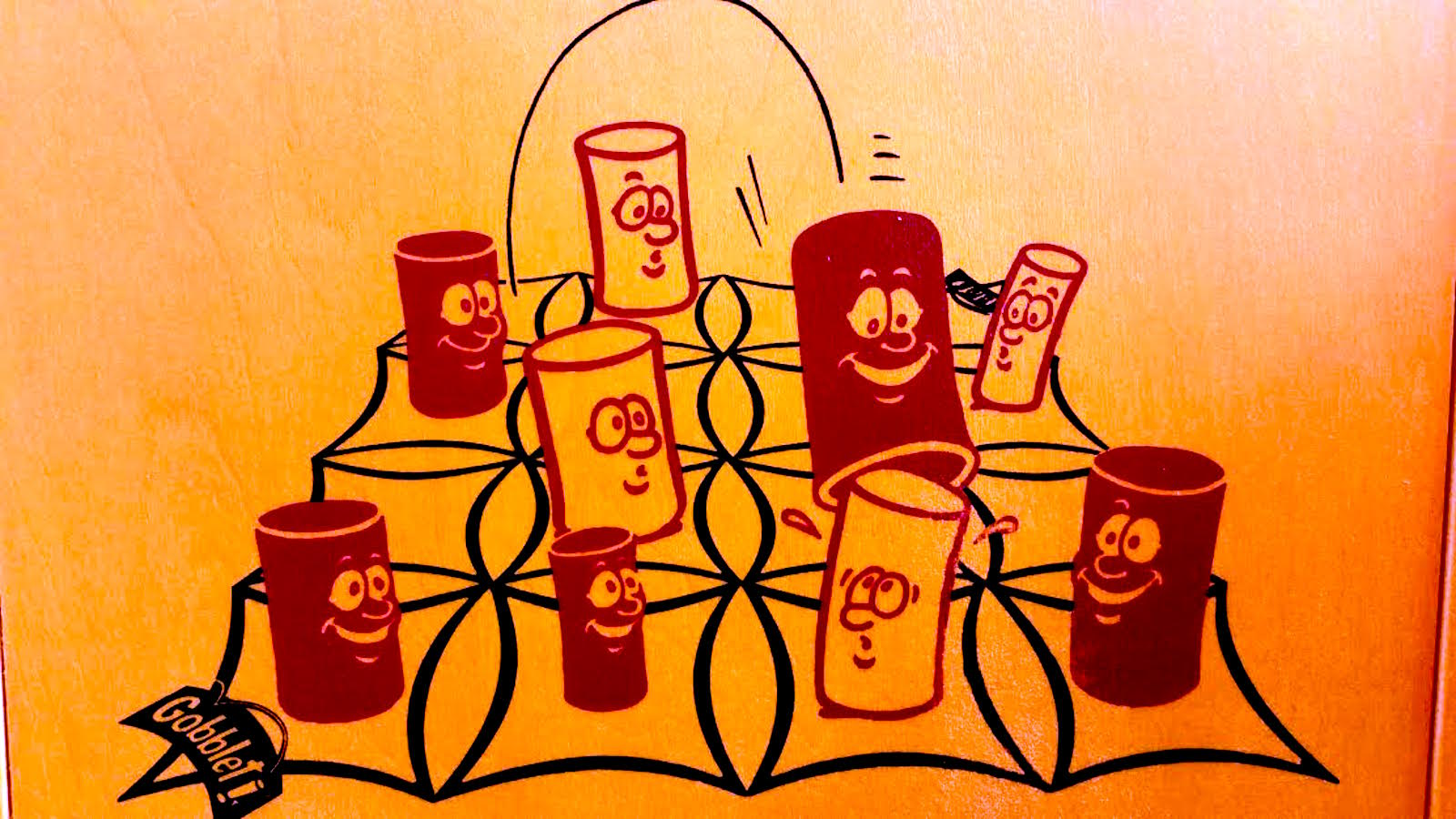 There are many titles that I cannot wait to get onto the table again. These are games I am always willing to play, will suggest them for game nights, and think about their mechanics in the time between plays. Gobblet is not one of those games, and yet, Gobblet will find a spot on my gaming shelf wedged between those top titles for a few simple reasons: it’s quick, fun, and easy to teach to anyone.

Blue Orange’s Gobblet is played on a four-by-four grid board where your goal is to be the first to align four of your pieces in a horizontal, vertical, or diagonal row. The pieces at your disposal come in three stacks, each containing four cylinders. They fit together like Russian Matryoshka dolls, with the smallest inside the next-biggest and so on. You begin by placing the largest piece from any stack onto an empty space on the board.

You can win by connecting four pieces horizontally, vertically, or diagonally.

From there, turns alternate with each player deciding whether to move another piece from off the board onto an empty space or moving a piece that is already in play around the board. The smaller pieces will start to come into play as you progress, and those pieces can be gobbled up by larger pieces. The hidden pieces aren’t eliminated, but they cannot help you complete a row as long as they are hidden under a larger one.

The interesting part of the strategy is that you can gobble up not just your opponent’s pieces but yours as well. That can allow you to move a piece, revealing another of yours, and completing a four in a row. It’s a neat twist on the four in a row concept, albeit the only twist the game really has.

Covering or uncovering pieces at the right time will be your key to victory.

It’s not a particularly deep game, but this makes it a step up from Connect Four strategically. Gone are the games of four in a row where equally suited opponents spend the game just countering each other until you have run out of spaces to fill. Sure, two equally adept players may go back and forth for some time, but there’s a rule where once you’ve touched your piece, you must move it. Forgetting that it’s hiding your opponent’s piece could turn the tide against you quickly.

Even in the most back-and-forth contest, Gobblet shares one good thing from its more well known cousin: speed. My son and I managed three games of Gobblet within ten minutes, and each was closely contested. Because of its brevity, it’s not a game you want to overthink. The game can lose its luster if you approach it as if you were playing chess.

Its greatest value may be in its ability to gateway someone into the world of gaming beyond the mass-produced fare. Like Connect Four? Checkers? Why not try this? Gobblet is deeper than both, yet is easy enough to learn in a minute or two. It certainly doesn’t hurt that a fine wooden copy can be had inexpensively. Every good gaming library should have a quick strategy game that can be used as a quick filler or entice people to venture into this expansive world, and this one does that job very well.

Gobblet is a quick four-in-a-row style game that uses Matryoshka-style pieces to take control of spaces on a four-by-four grid board. It takes a minute or two to learn and just a couple more to play, but Gobblet is fun and has just enough depth to provide a little challenge. For about $20, you can add a wooden game to your collection that anyone can play and provides a little strategic exercise. It’s not a bad deal.