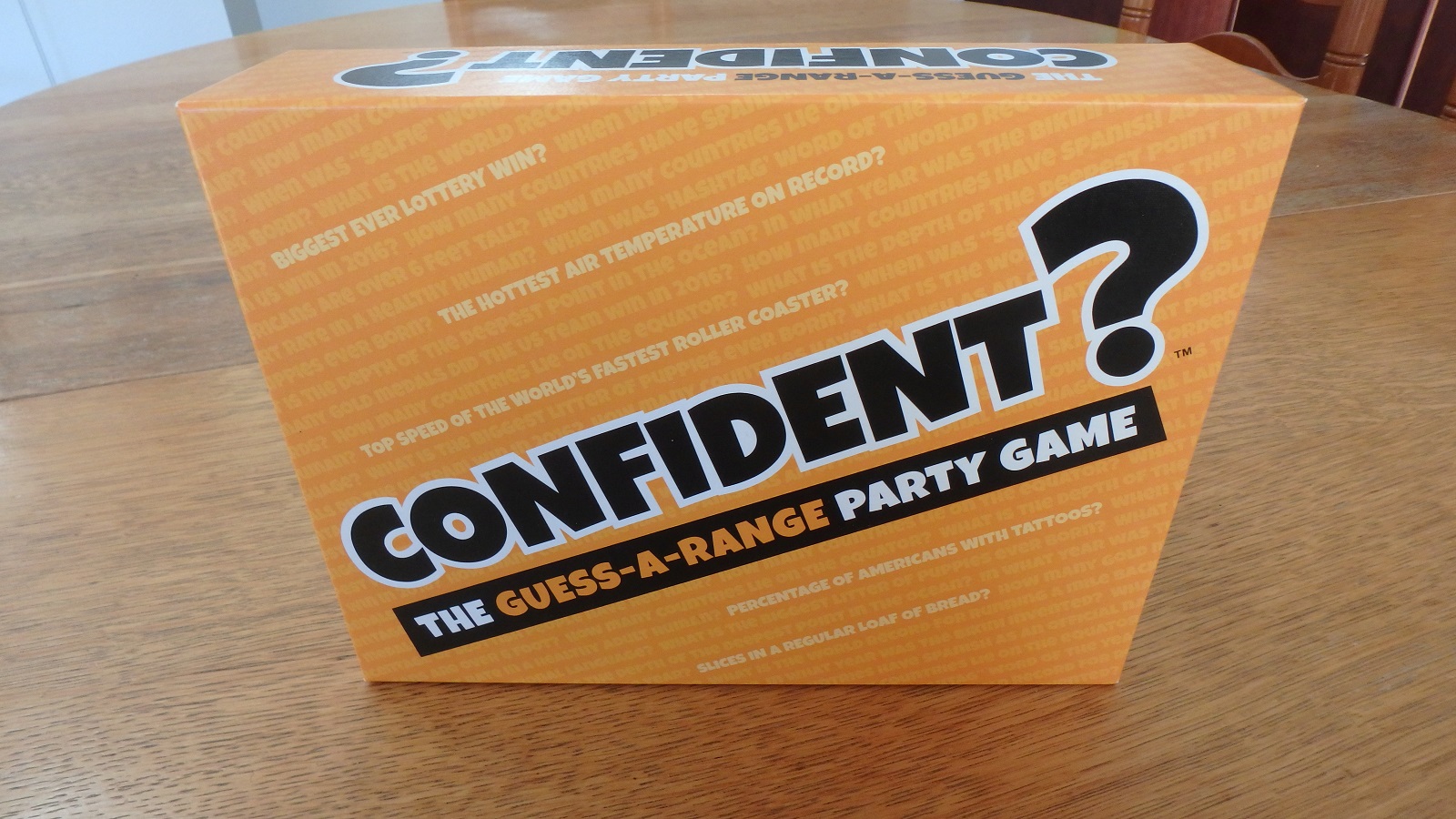 There aren’t too many cardinal sins that a game can make that will immediately kill it for me. But to state the relatively obvious, a game will fall flat if it bores its players; a game needs to provide interesting choices in order to stand up to any sort of play. Also, some people may disagree with me, but if the optimal way to play a game isn’t exactly the fun way to play it, that creates a weird dilemma for players that really shouldn’t exist. And last, but not least, games (especially party games) should not create more “feel bad” moments than “feels good” moments. Confident? commits every one of these sins, and picks up a few extra along the way.

So, first off, the optimal way to play Confident? is almost immediately obvious, and eliminates any and all meaningful decision space. Each round has players writing down a range of numbers that they think the answer to a trivia question will fall inside of. Everyone with a correct range will score a point, with the smallest range scoring three, and the largest range failing to score any if everyone is correct, with the first to fifteen winning. Players are also given a set of one-use powers that they can indicate on their boards: copying someone else’s answer, switching two other player’s answers, and doubling whatever their score would be. The problem here is that, in my experience, someone will almost always have an incorrect range trying to go for the three point smallest reward, meaning that the best way to play is to put an absurdly large range because you won’t get hit by the largest range penalty. This will ensure a steadily increasing score until a question comes up that you are very sure of (for example, I actually knew Joey Chestnut’s hot dog eating record), where you can use the double power and score six points, which will usually put the game in the bag. 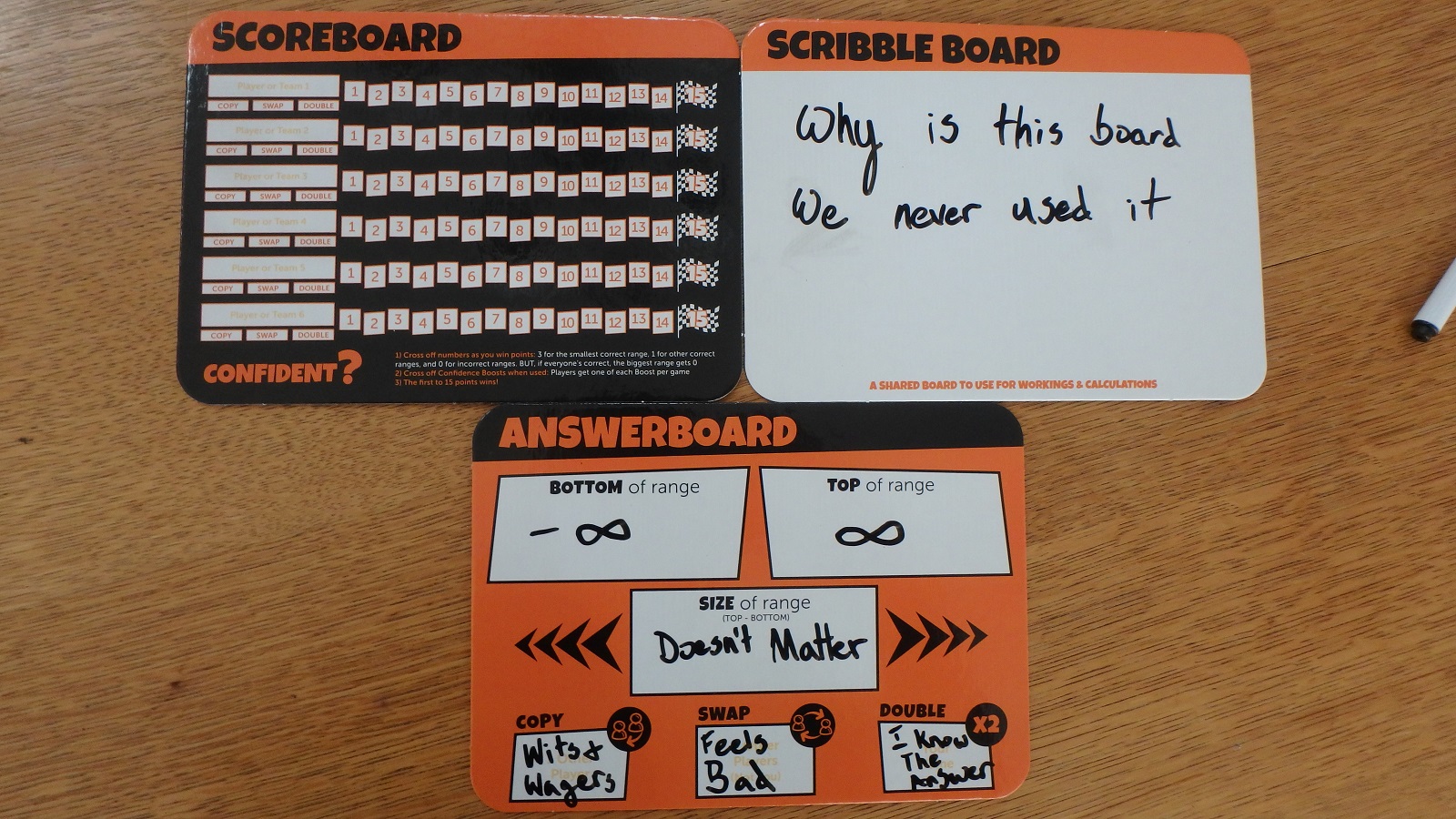 After realizing this, I decided to test out a game where I seriously only changed my boring extreme answers so that I wouldn’t be punished with a swap (more on this later) when I went for small ranges. I won that game handily. Confident? not only rewarded me for playing in the most boring and anti-fun way possible, I absolutely crushed everyone at the table. I didn’t feel good for winning that game, and everyone else felt cheated. I haven’t brought the game back to the table since then, with the mere mention of it causing grimaces and sharp inhales through gritted teeth.

The aforementioned powers only serve to exacerbate this game’s failings. Since you decide if you’re going to use a power before answers are revealed, the copy power requires blindly admitting that you just don’t have a chance at answering better than someone else. The switch power seems to be a balancing effort, where in theory players are incentivized to switch the players in first in last place, but in practice this may or may not even work. In actuality, it mainly serves to kick people when they’re down, since it reinforces that not only are you losing, the whole table knows it. Even if you are successful in keeping the person in the lead from scoring while providing last place with points, that’s gonna make the leader feel bad cause they just lost points through no fault of their own- Confident?’s very own Mario Kart blue shell. Finally, the double power only really serves to create runaway leaders, which, in case it isn’t obvious, is also not fun for anyone. 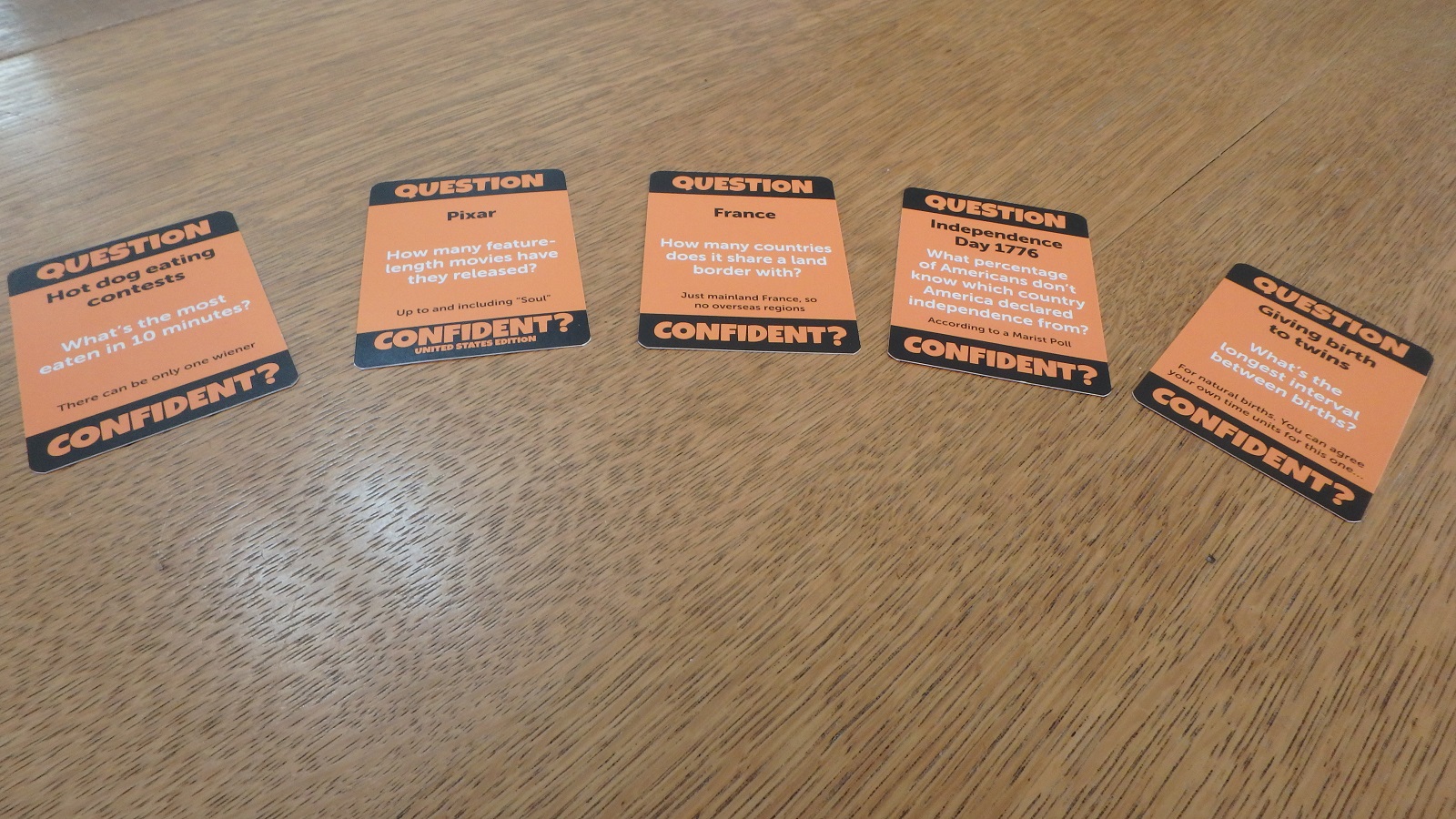 And Confident? doesn’t stop at just committing general board gaming sins; it also messes up being a functional trivia game, a feat I didn’t think was possible. The questions range from the absolutely impossible to know (what percentage of Americans don’t know who we declared independence from), to those that people with certain interests will know (the aforementioned Joey Chestnut hot dog question, or how many Pixar movies there are), to those that only require counting and vague knowledge of geography (how many countries border France). I came across a particularly egregious question, which instead of providing what units of time players will be answering in, requested that the group come to a consensus before writing down their answers. The questions are formatted in such a way that the reader either has to reword it themselves so it actually makes sense, or sound like they’re blackout drunk, which, funnily enough, was the only enjoyment I found in this box. I can only imagine how bad this game gets as an actual party game with teams of people instead of individuals, since the way this game is played will inevitably lead to one alpha player essentially running the team, leaving everyone else to just sit and think of all the actually fun things they could be doing instead.

The back of the rulebook has suggestions for alternative modes, but they only exacerbate Confident’s failings instead of addressing them. Running through them all, requiring someone to win with 3 points lengthens the game, but has the same issue where someone who just knows the answer winds up winning. Giving five points to a player who writes the exact answer with no range once again rewards people for sitting back until they know an answer and then double it for ten points. Only giving players ten seconds to answer leads to more incorrect answers. If we do like the rules suggest and only reward the two smallest answers, we do eliminate the enormous range issue, but make losing feel even worse. Same with making incorrect answers score negative points. The last one gives rules for a two-player game, but after playing the game as it was designed, I’d rather sprint naked through a briar patch than play a tacked-on two player variant.

Honestly, I’m not even sure Confident? is a game. I realize that Wits and Wagers is more expensive than Confident?, but it excels at everything that Confident? fails at. If you're looking for a party game, I’d also suggest Codenames, which still holds up. I just cannot recommend even playing this game, let alone buying it.

Nick grew up reading fantasy novels and board game rules for fun, so he accepted he was a dork at an early age. When he's not busy researching the intricacies of a hobby he'll never pick up, Nick can be caught attempting to either cook or befriend local crows.
Related Articles: Confident?, Tabletop
Share
Tweet
Share
Submit