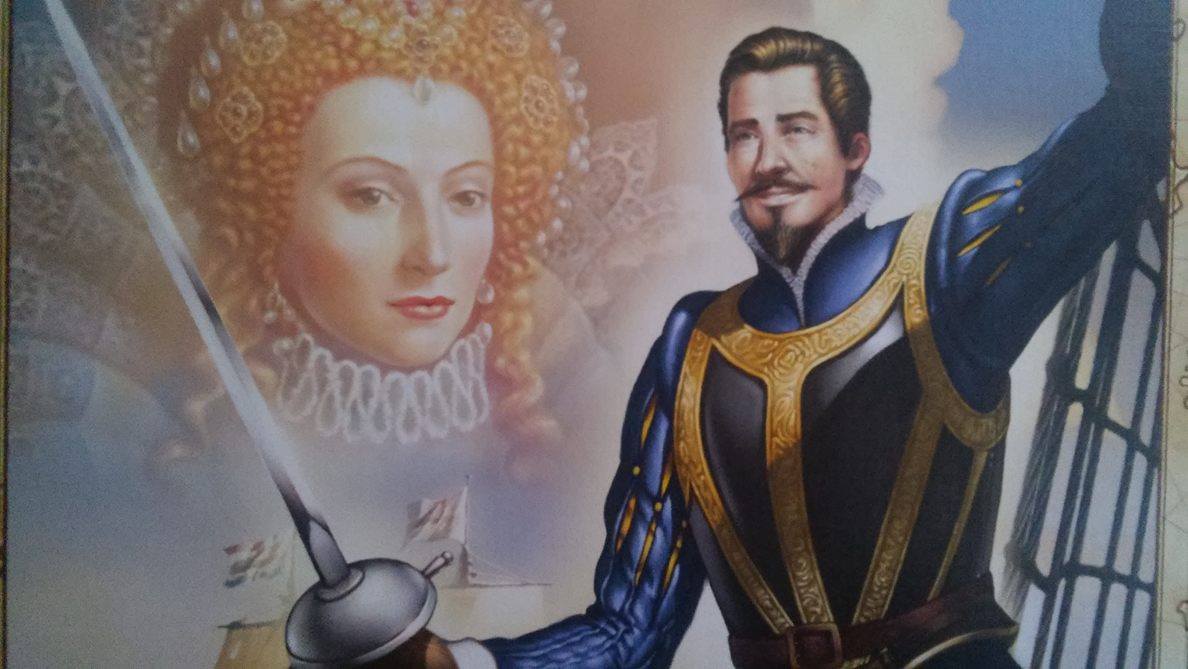 Sir Francis Drake, legend of the age of sail, defender of the realm, and rumored lover of the Queen herself, is the perfect figure to inspire an adventure. Eagle-Gryphon Games brings us a chance to explore his world of expansion and factionalism in all its glory. Francis Drake, a strategy game for three to five players (that hits its stride at higher player counts) has all the excitement of crewing a ship, sailing the seas, and returning with whatever plunder or trade goods you come across. Some of that excitement is bogged down with intricate mathematics, but the strategy of the game is built around outwitting other corsairs in their race to bring glory to the crown.

Francis Drake exudes a theme of racing your countrymen to beat the odds. You struggle for the same resources and place roadblocks in their way, and the whole time you need to be eyeing them to analyze how quickly everyone is moving. The art gives a solid impression of Victorian portraiture, and everything, down to the borders on cards, puts you in the place of a captain strategizing over his cabin table.

When set up completely Francis Drake is a massive, flowing game that sets the tone of a grand adventure

The game takes place over three rounds, or voyages, each of which are broken up into two phases. In the first phase you and the other players need to provision your ships with several types of resources. Crew run your ship and are essential for combat with Spanish forts. Guns on board your ship help combat with other vessels, though you can never come into direct conflict with other players. Supplies feed your crew and denote how far your ship can travel before having to turn back, and advisors grant you special abilities to manipulate the field of play.

In the voyage phase  you travel the Spanish main, gaining wealth through trade or plunder, trying to optimize the resources available at each location before other players or impeding their attempts at success.

In the first phase all provisions are placed on a one way street. It is one way in that you can only move forwards: more powerful abilities tend to be near the end, but once you place one of your markers down, you can never go back. This balancing test is crucial however: Each location offers diminishing rewards to later players, and many run out entirely after a player or two. You must choose your strategy quickly and decisively.

Players decide themselves when they are done provisioning and ready to sail. This determines turn order in the next phase, which is a crucial aspect of the missions that will take place during that phase. You need to have in mind your strategy for next round as soon as possible. You can outfit yourself for trading or combat, and there are multiple ways to prepare for each. The first time through a game, you will have to reference the guide often due to the complexity of the mechanics. While each location’s ability is thematic and strategic, some are too elaborate to explain via symbolism.

The first phase can also feel overwhelming. Over the course of the game, you are likely to get a reasonable handle on what works and what doesn’t, but for a game that is reliably two hours long, it bears saying that this is a serious investment of mental effort. Francis Drake’s length is a disadvantage in that experimentation feels like such an important aspect of the strategy. The time between formulating a strategy and seeing it succeed or fail can be extensive, especially if you are playing with overly methodical players.

The numerous advisors are decidedly not balanced, forcing you to make harsh decisions quickly. There is actually some intriguing interaction, both here and in mission choices later on in feeling out your opponent and deciding your course of action. For example, the Governor decides how many spanish troops at will be at each fort, which only he knows. I find these mind games thoroughly refreshing, especially as they fit into the theme. While I’m not a fan of the style of strategy games with indirect   player interaction, I can appreciate this mechanic here. Francis Drake does not break from this formula and at times is still too dry of an experience, but the ways you can influence your fellow players come up throughout the game and affect the entire table.

During the voyage phase, players secretly place down mission tokens at different locations, one after each other. Multiple players can place tokens at the same location, under another player’s token. These locations could hold a town to trade with, ships to raid, or anything in between. Timing is as crucial as preparation here: completing the same mission after another player, assuming you can in fact complete it, results in fewer victory points for you. Some of these missions will be bogus, goading your opponents into focusing on an area that is not important to you. In those areas, your opponents will still not be aware of your intentions. This is an especially tense stage because the order in which you choose to attempt your missions are also not known until you reveal them.

The resolution stage, a culmination of sorts, is also the most dry. The game slows down as every player in turn resolves their actions, and the methods of resolution are not differentiated enough. Whether trading or fighting, the mechanism you use expends wooden cubes in order to gain other objects which you will trade for victory points. The strategy is affected by other players and timing, but ultimately feels too similar between the multiple roads to victory. Rewards are ultimately different but the mechanisms of achieving those goals are not. Francis Drake feels like a long period of buildup and planning for a period of point calculation which then goes on two more times. You don’t carry anything over into the next round except for commodities, which leads the three tier system to be kind of unnecessary except to reward those players who stick to commodities over the course of the long game. To its credit, you do have to decide when you are finished and return home, so you have to pay attention as the phase is playing out.

I find myself caught on whether the three voyages is a wise decision. In a way it feels unnecessary playing the same game three times. At the same time, over the course of the same game you get to explore multiple different strategies. I have played other strategy games that were the same length and complexity, but you never quite knew if your plan was working until the final point calculation. With Francis Drake, you can see other players’ strategies successes and failures and adjust accordingly. The mind games continue each round as you try to deduce out one anothers’ plans and get in their ways.

Ultimately, Francis Drake is a worthy adventure in the Spanish Main. You and your compatriots engage in a battle of wits as you race forward and backwards around the seas. For those that would prefer to eschew the randomness and antagonism of Merchants and Marauders, Francis Drake is a lush, memorable experience that delivers a thoroughly satisfying test of your abilities.

Francis Drake is a deep, strategic adventure for the glory of the crown. While you race other players for plunder and trade you may feel the length strongly but the multiple phases of play break it up to put it a cut above its competitors.

John Farrell is a legal aid attorney specializing in domestic violence, living in West Chester Pennsylvania. You can listen to him travel the weird west as Carrie A. Nation in the Joker's Wild podcast at: https://jokerswildpodcast.weebly.com/
Related Articles: Francis Drake, Tabletop
Share
Tweet
Share
Submit