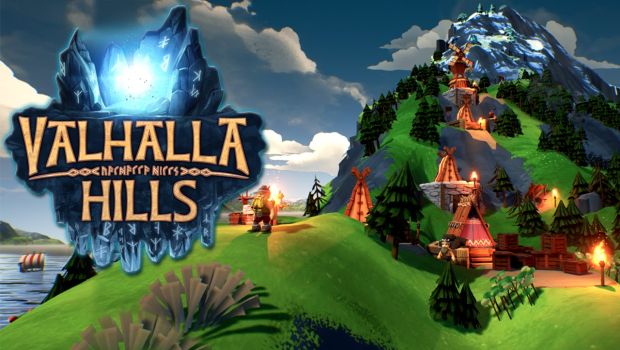 There are lots of different strategy games, all catering to a variety of tastes that only get broader as the gaming hobby continues to find new members. Valhalla Hills looks to scratch that gaming itch where we want to challenge our wits and memory but can walk away before skipping any meals.

In this title you’re taking on the role of Niko, a son of Odin who has the unpopular talent for building rather than warring or drinking the way a good viking should. Angered by his son’s lack of bloodthirst and debauchery, Odin banishes Niko down to Earth along with the other vikings who’ve failed to meet his requirements to reside in the heavens, demanding they “make something of themselves” if they wish to return.

Stranded, Niko decides to launch a plan to recur his father’s favor without changing who he is. Working alongside the vikings cast down with him, Niko uses his power to build a life for the vikings that will make his father proud. Together they must work with the resources around them and prove themselves worthy of passing through a series of portals that will lead them back to paradise.

Odin has never really been characterized as a warm and loving sort of dad. So the idea of him banishing his infant son for not being enough of a barbarous killer really wasn’t that strange.

At a glance you can tell that Vahalla Hills is going for a much warmer and friendlier vision of Viking lore than the alternative. Your Vikings are are bright-eyed and pudgy men women, happily going about their work as they build, hunt, and (occasionally) have to fight their way to the land of the gods. They are, frankly, quite cute, and compliment the bright and colorful world you’ll be inhabiting with them for hours to come.

Beyond these aesthetic values however, Valhalla Hills is still very much a strategy game, requiring a keen instinct for minutia to progress the way you’d want to; if at all. From the moment the opening credits complete and the game proper starts you’re reminded of this as you begin clicking through your HUD in search of unit commands, job descriptions, and completion requirements. (None of which exist, strictly speaking.) Just because this title has a warm and fuzzy look doesn’t mean it’s meant for kids or won’t challenge your wits.

One of the first things I noticed about Valhalla Hills is how it employs a largely passive command system. You’re not telling your viking followers what to do as much as constructing things for them to use. If your people need food, build a hunting lodge or a fishing dock. Or,do they need someplace warm to rest instead laying outside with the elements? In that case construct a tent. With the required facilities available your vikings usually figure out what it is they need to do and go about it themselves. For those of us RTS players who are tired of our units idling uselessly out of eyeshot or finding the nearest bottomless pit or active volcano to suicide in,this is a welcome component.

However this control scheme isn’t perfect, or at the very least it’s not entirely welcoming.

The design and technical function of Valhalla Hills is extremely smooth and well laid out, taking advantage of all corners of your screen to minimize visual clutter.

As I said before, Valhalla Hills has a mostly passive control scheme, and it’s the point where you do and do not have direct command that your frustrations may begin to rear their head.

If you build a tent, for example, Vikings will automatically assign themselves to it and rest when they are tired; which is great. However, if (or when, because gods help you if you don’t) you build a toolmaker to craft your tools you must assign the building to build each tool required for each unit and job combination. But the act of acquiring the raw materials to achieve this is still a passive process, so while you can tell the smith to build ‘x’ number of stone axes now, and you can locate those resources on the map, you must wait for your gatherer to wander off and take it upon themselves to get them.

This indirect creation process honestly isn’t a big deal. You can find a rhythm to alleviate your need for instant gratification and if all else fails you can just crank up the turn speed to zip your vikings through their day-to-day. It’s mostly the obtuse tutorial system that makes it a problem.

Valhalla Hills isn’t unique to the concept of assuming a player’s familiarity with its controls; Many titles do this to varying degrees. However, the measurement between it being an oversight or a handicap is determined by a game’s playability even if the player in question has no formal idea what they’re doing. Valhalla Hills teeters back and forth in this regard, where sometimes what you’ve figured out so far will send you rocketing through your development, and other times progress will grind to halt while you tediously click around your HUD looking for that missing requirement.

Once you do get into the flow of this game however, you will truly be able to appreciate what it has going for it. The graphical quality, while simple, is smooth and refined, striking an unexpected balance between old-school sensibilities and modern-day sharpness. The maps are fully articulated, allowing you to move and zoom freely about their entirely and providing a hexagonal grid only when it’s appropriate, allowing a more consistent sense of immersion.

Once you learn how to build your structures and layout your villages Valhalla Hills really starts to feel alive. But learning the difference between how a process is described and how it actually plays is a labor of love you might not feel quickly.

The music of Valhalla Hills is… alright. It’s soothing, adequately produced and thematically appropriate, but not memorable. Considering this title is mostly about magicing buildings into existence, large orchestral scores would’ve been strange, granted, but something a little more unique and stylish would have been nice during those times when I was hurrying up to wait.

On the point of action, there isn’t a great deal of it. Most of the fighting you will encounter is when your brave followers decide to press onward to through the next portal toward Odin’s side. At these times, and depending on how you play it, guardians may appear to challenge your vikings to prove their worth. These battles are mostly a test of your preparedness and foersight, not of your tactics or formation of units. Niko is a builder, not a fighter, and it’s at these moments that it shows the most. (Complete with animated blood. Because… you know… vikings.)

This is honestly a very well built game and a pleasure to play. It’s not really all that complex or burdened with layers of technicalities of its own design. It feels inviting and wants you to have a good time poking around with your options in search discovering new features to add to your fun. But the lack of a strong tutorial system slides it to a farther end of the learning than I think the developers intended. You sort of need to have a strong grasp of RTS games like this one in order to feel confident any time soon, and that’s not the kind of thing a newcomer may want to put themselves through.

When I first saw this screen I was elated, but also confused on what I had done to deserve it.

Other should-be-important details, such as how to accrue Honor, a type of passive meta-stat required by Odin for your vikings to be accepted into his kingdom, goes largely unexplained even after it becomes necessary. I cleared the first few maps being told how impressive my Honor score was with no idea what that meant, how to check it, or how I could do it again.

These are small hurdles that are easily overcome and the only things holding Valhalla Hills back from it’s real potential. It was an odd feeling when I noticed I was having fun and advancing, but how most of those talents hadn’t been provided to me from the game itself.

Valhalla Hills is a well built title easily capable of fulfilling a short term RTS fix. It’s complex without being complicated and rewards players with dozens of unlockables for clever and calculated play. Valhalla Hills’ only real drawback is the lack of a tutorial system that allows players to learn and take advantage of all the things it has to offer. RTS hardcores should find little difficulty with this potential caltrop, but moderate and casual players might have a very hard time.

I've been a huge fan and critic of games and movies ever since I had a voice to speak about them. I love power and influence of great storytelling, interactive and otherwise, and now want to be more than just a consumer. My biggest strength in this regard? Almost every time, I'm fair all the time.
Related Articles: Valhalla Hills
Share
Tweet
Share
Submit