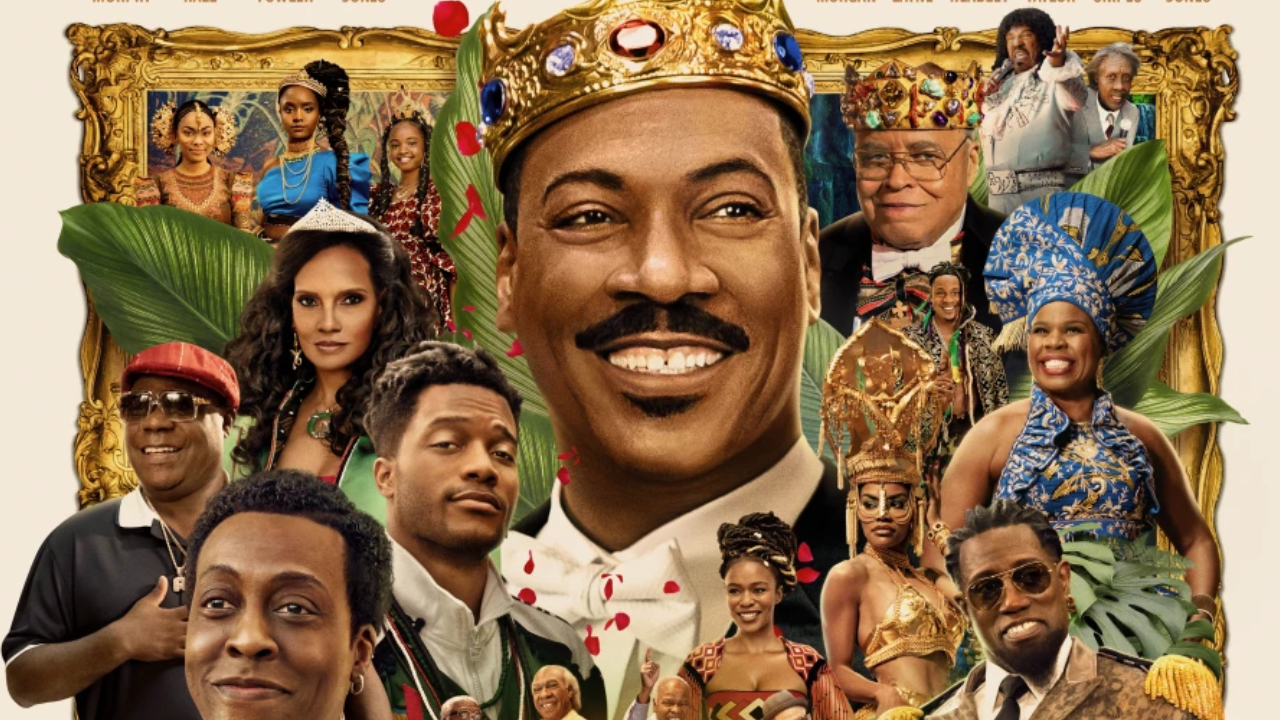 Coming To America hit at precisely the right time, with an impossibly talented cast (hello cameos from complete nobodies named Cuba Gooding Jr. as “Boy Getting Haircut”, some comedian nobody had ever heard of named Louis Anderson as fast food worker “Maurice”, and some guy named Samuel L. Jackson as “Hold-Up Man”) including Eddie Murphy and Arsenio Hall playing nearly a dozen characters. Helmed by then equally-unknown John Landis, and the two writers behind the painful Police Academy sequels, this nearly all-black cast absolutely blew the doors off this movie. It was sharp, witty, and genuinely laugh-out-loud funny in a way that holds up to this day. Here we are 33 years later and somehow Eddie Murphy has cobbled nearly all of the cast back together once again for another trip to Zamunda. Can lightning strike twice?  Let’s get a refresher on the original:

Set decades after the first movie, obviously, Prince Akeem is heir apparent to the kingdom of Zamunda, and his ailing father, King Jaffe Jaffer (played by returning true-life king of cinema, James Earl Jones) is preparing his son to take over his throne. Happily married to Lisa (with Shari Headley returning), Akeem and his wife have welcomed three lovely daughters into the royal family, but no sons. Unfortunately, due to the laws of the land, these strong women cannot inherit the throne should something happen to Akeem. Semmi, remembering his date scene in the first movie (with a quick retcon jog to the left) suddenly remembers that before he met Lisa, Akeem had a one night stand that might have produced an heir. The boys once again saddle up and jet-set back to America where it all began.

Back in Queens, New York, we meet Lavelle Junson, played by newcomer Jermaine Fowler – Akeem’s long lost son and rightful heir. After a brief will-they-won’t-they, Junson heads to Zamunda with his mother Mary (screamed at high high volume by Leslie Jones) and uncle Reem (played by Tracy Morgan) in tow. Treading familiar territory, Akeem tries to set up Junson with the beautiful Princess Bopoto of Nextdoria (enjoy that pun – Bopoto is played by Teyana Taylor), but this time with a wider purpose. Nexdoria is a powerful country with a powerful leader, General Izzi (played magnificently by Wesley Snipes), who is fairly openly plotting a coup. A marriage would unite the two countries, sparing Zamunda a war and keeping Junson on the throne. Well, love has other plans. Hijinks ensue, and we are off to the races.

There is one casting choice that absolutely ruins chunks of this movie for me, and I’ve already alluded to it – Leslie Jones. Leslie “Your joke, but louder” Jones pours lye over every scene, attempting to turn volume into comedy. Thankfully her screen time is blessedly minimized, but if they simply eliminated her character entirely the movie (and audience) wouldn’t suffer for it. The rest of the cast is absolutely stellar, with the over-the-top performance from Wesley Snipes being an easy favorite. Thankfully Eddie Murphy and Arsenio Hall wear their roles comfortably, able to jump right back into their familiar banter like a day hadn’t passed between the two films.

The film runs an hour and 50 minutes, and frankly it feels about 15 minutes too long. That could be the musical number, Leslie Jones, or just that the writers went at this with an approach that can only be “throw all the jokes, see what sticks”, but surprisingly it somehow still works. Coming 2 America is a comfort food film. Sure, it walks familiar paths, but with a bag of popcorn it’s a fun run. It’s not breaking new ground, nor does it try to. Sure, we don’t get the crass R-rated “Yes! Yes! F*ck you too!” balcony moments, but the PG-13 rated sequel doesn’t seem that much worse for wear for it. Come for the nostalgia, enjoy the new faces, stay for the Eddie / Arsenio show, and stick around for the gag reel. Will we ever see a third film? I doubt it, but hey – I never imagined we’d see a second one, so you never know.

Getting into the nitty gritty of the Blu-Ray release, it’s a bit of an uneven puzzle. At the time of writing, there isn’t a 4K version on offer, despite the original Amazon release being in 4K. That said, I can’t say a comedy really benefits from an Ultra High Definition release, so it’s not a huge loss. What is on offer is a gorgeous transfer, bright and color rich, with deep black levels, and an incredible attention to color tone. The latter is important as capturing black skin tones is an area Hollywood has struggled with for years. Here we see the excellent work of team Paramount capture darker and lighter skin tones effortlessly.

Ruth E. Carter’s team put together the excellent costuming seen throughout the movie, subtly emphasizing the various regions of Zamunda. Similarly, the hair and makeup comes across beautifully – no matter what you end up thinking about the film itself, there’s no denying that it’s gorgeous to look at, and it’s captured flawlessly on this disc. It’s presented at 1080p, using a MPEG-4 AVC codec and an aspect ratio of 2.00:1. If you are unfamiliar with this aspect ratio, it’s a compromise between the 1.85 and 2.39 aspect ratios that can appear too wide, cropped or otherwise manipulated when converted to 16:9. This new aspect ratio, dubbed Univisium has powered such films as Jurassic World, Green Book, Midsommar, and more making wonderful use of it on the large screen. Both Netflix and Amazon have also embraced it, bringing us Stranger Things, The Crown, House of Cards, and A Series of Unfortunate Events being just a few that have used this format to great effect.

Audio mixing is critical if you are going to invite the likes of Mary J. Blige, Salt-n-Pepa, En Vogue, Gladys Knight & The Pips, and John Legend to score your movie. Coming 2 America brings their vocal stylings to life with a 5.1 DTS-HD Master Audio track that brings the vocal tracks forward, but brings the bass when needed. We could all aspire to have a booming accompaniment for our entrances like General Izzi, but we’ll never be that cool. It’s clean and clear, and well balanced, as it should be. If, like me, you like watching your movies with subtitles, you’ve got a choice of four – English, English Subtitled for the Deaf and Hard of Hearing, French, and Spanish.

There aren’t a lot of extras, but the audio commentary from Director Craig Brewer is pretty robust. Eddie Murphy, Arsenio Hall, Teyana Taylor, Tracy Morgan, Shari Headley, Wesley Snipes, and more of the cast and crew join in the fun as Brewer gives us a look at story development, characters, costuming, and production challenges. He also gives us some shot-by-shot commentary on individual sections of the film, so if you want to know how this sequel was brought to life, it’s here for you. 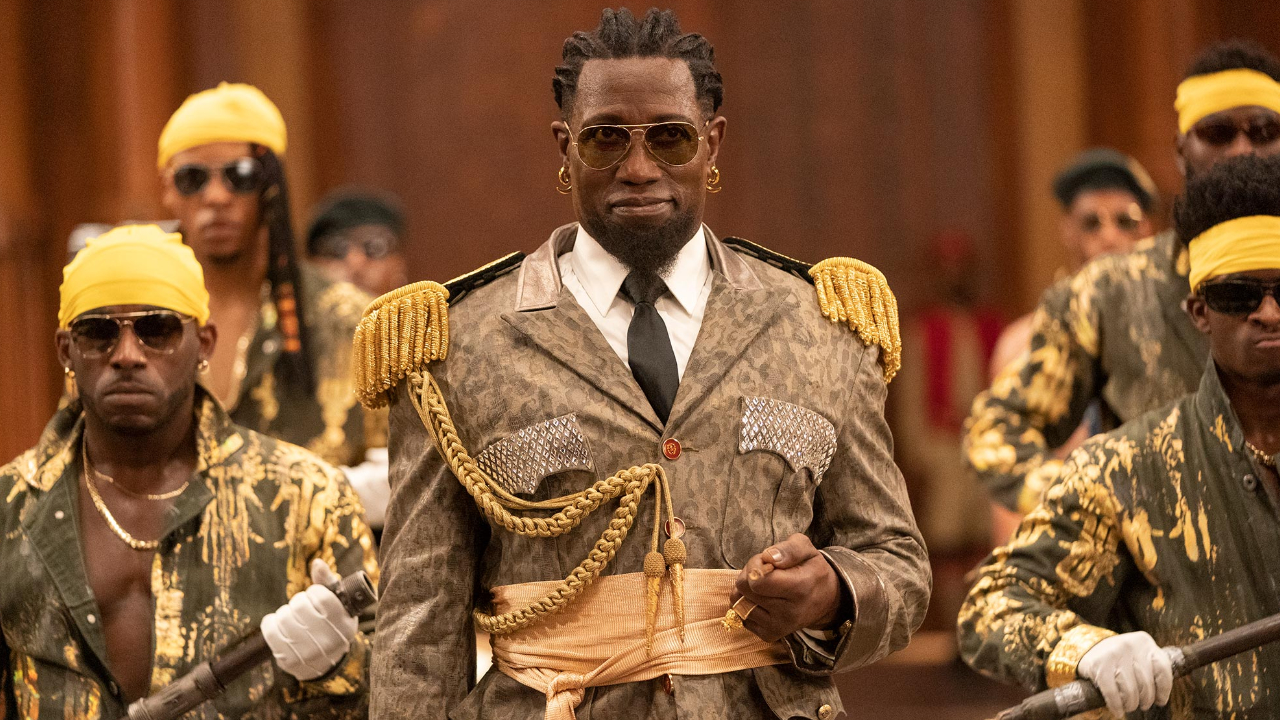 There is a featurette included called “From Queens to Zamunda”. This 26 minute segment gives us some behind-the-scenes on how they brought Zamunda to life in Atlanta, Georgia, as well as a few interviews that hadn’t yet aired before the film’s launch.

Rather than including the pre-launch trailers we can all see on YouTube, we are treated to a bit of Eddie’s greatest hits. The trailers included are promos for the original Coming to America, but also includes his other films including Beverly Hills Cop, Trading Places, Dreamgirls, Harlem Nights, and 48 Hrs. You won’t find Holy Man, The Adventures of Pluto Nash, or Vampire in Brooklyn, though.

Coming 2 America may not capture lighting in a bottle twice, but it’s good fun for the most part. Some casting choices fall flat, and the additional features on the Blu-Ray are a bit thin, but if you loved the original, this movie fits in like good comfort food.

Ron Burke is the Editor in Chief for Gaming Trend. Currently living in Fort Worth, Texas, Ron is an old-school gamer who enjoys CRPGs, action/adventure, platformers, music games, and has recently gotten into tabletop gaming. Ron is also a fourth degree black belt, with a Master's rank in Matsumura Seito Shōrin-ryū, Moo Duk Kwan Tang Soo Do, Universal Tang Soo Do Alliance, and International Tang Soo Do Federation. He also holds ranks in several other styles in his search to be a well-rounded fighter. Ron has been married to Gaming Trend Editor, Laura Burke, for 21 years. They have three dogs - Pazuzu (Irish Terrier), Atë, and Calliope (both Australian Kelpie/Pit Bull mixes).
Related Articles: Coming 2 America
Share
Tweet
Share
Submit