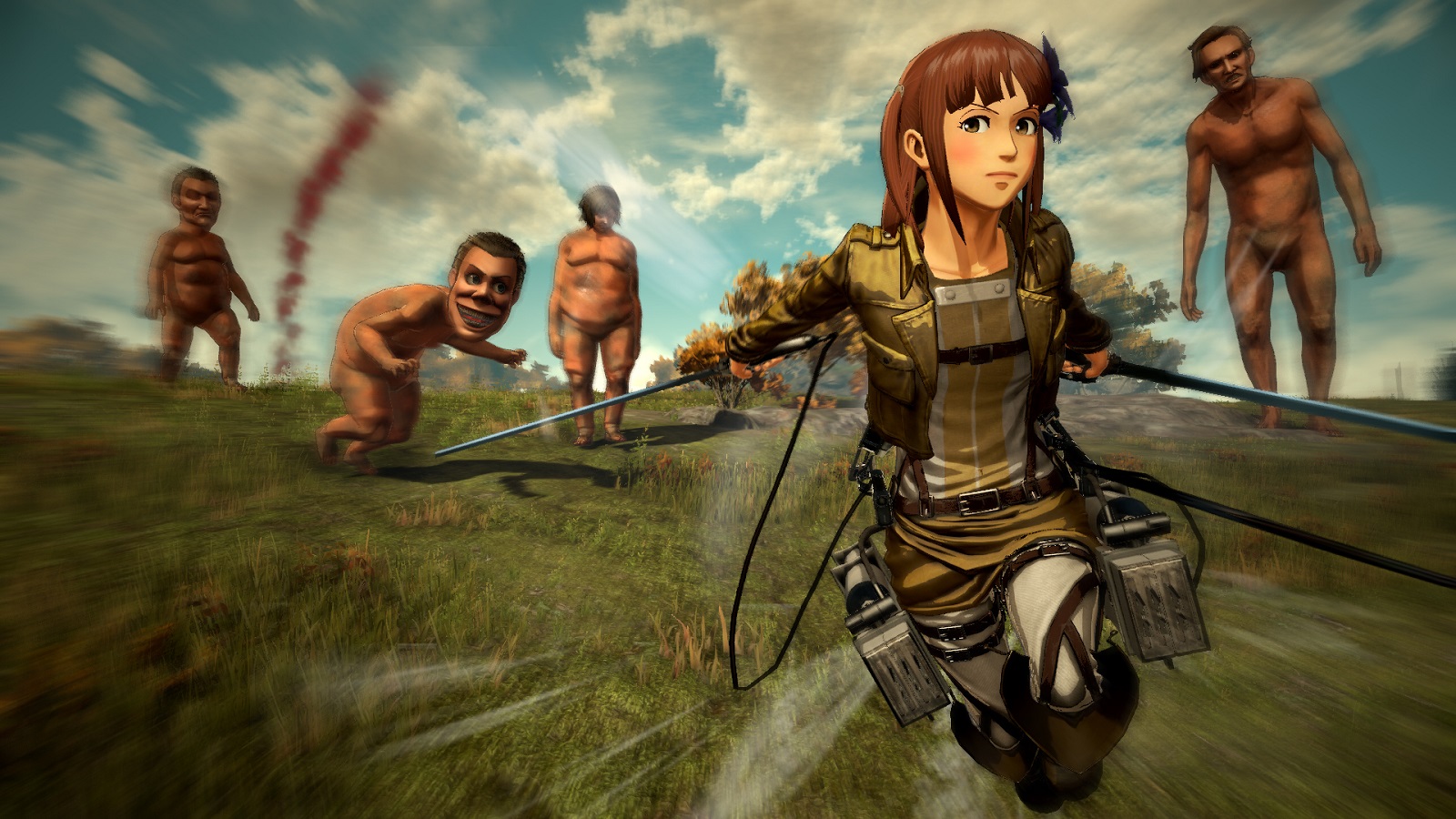 Say what you will about the franchise and its ever-expanding list of spinoffs, Attack on Titan is one of the biggest anime and manga series to hit the west. I really enjoy humanity’s last remnants rebelling against monstrous inhuman (erm…) creatures, and the most recent chapters are shaping up for the manga to reach a climactic grand finale. In the meantime, we have season three of the anime this spring, as well as the next Koei Tecmo adaptation of the series. Simply titled Attack on Titan 2, this action/hack-and-slash game, while a little rough around the edges, hits the titan slaying urge very well.

Much like its predecessor, Attack on Titan 2 recounts the adventure of Erin, Mikasa, Armin, and the rest of the 104th trainee corps from the fall of Shiganshina to events from season two of the anime (so you’ll get to see the Beast Titan in all its humongous glory) as well as some original scenarios created for the game. While the first game had you controlling Erin and his friends, this game’s main story mode has you create a custom character that will participate in events as one of the trainees.

The plot is framed by a mysterious journal found in the beginning of the game (Ilse’s notebook comes to mind), where the reader will get to experience the events from the player character’s perspective. By doing this, it gives Koei Tecmo an excuse to rehash the same plot points it covered in the first game from a different perspective. It’s not necessarily a bad thing, and it fleshes out major key points for newcomers, but it can feel a tad repetitive for veterans or those who played the first game. The Battle of Trost arc is spectacular, but I’ve already seen it play out with every other Attack on Titan game.

However, the custom character is a nice addition to this game; you can make them male or female, and while facial and clothing choices are a little limited (you can change your looks at any time during the story, but I couldn’t really make my character as unique as, say, a Sim), there’s enough to differentiate your protagonist. Story-related narratives are broken up into episodes, which are a series of battles in which you must participate. It’s here where the trademark style of Attack on Titan shines.

Character creators are all the rage these days.

Koei Tecmo is known for its expansive yet slightly generic Warriors series, with characters hacking up lungs of thousands of enemies in beautiful but repetitive settings. Attack on Titan, on the other hand, has one or two titans that can rip into dozens of humans (think Shadow of the Colossus in terms of man vs. beast conflict). Get a group of titans together (like in the anime’s the Castle Utgard arc), and the humans are royally screwed. Instead, we get a mix of two playstyles, with characters able to destroy parts using certain blades and omni-directional mobility (ODM) gear to evade themselves as the next meal. When attacking a titan, players will have to aim at a certain body part (be it a limb or the ultimate weak spot of the nape of the neck), position themselves to hack it away, and time a button press to hit it.

Using ODM gear or attacking will decrease gas and blade durability, respectively, and after a set amount of time, you must refill using items. The ODM gear is a blast to use, and I feel like Attack on Titan 2 nails the exhilarating feeling of traversing through towns and other settings with this gear. However, in open areas like fields, you’ll have to use your trusty steed to travel across settings without a surplus of buildings. These movement mechanics beautifully emulate the feeling of the series, and I really loved zipping around instantaneously, with only a brief respite to refuel.

You should uh… look behind you. Yeah, do that.

There are, of course, complications. Titans range in different sizes, and abnormal titans are rather hardy. Thankfully, you can build bases around the map such as supply and weapon bases (which can automatically or manually fire at enemies) to assist you. Titans can destroy these, however, so you might want to be careful on where you build them. If you do end up getting caught in the grip of a titan, you can either mash a button to get out in a quicktime event, or get an ally to assist you. Up to four allies can be summoned at will, and can be recruited during a stage as optional sidequests and missions. I liked this aspect of getting someone to help you in a dire situation, and the cutscenes of allies helping you are very flashy. Later in the game, you can even use a restraining gun to capture titans after weakening them enough, which in turn will grant some bonuses through research and development.

There are some basic crafting mechanics you can use within the game.

Fighting titans can be a wholly entertaining experience, but can suffer from a repetitive grind, especially on earlier stages when you’re relatively weaker. The final titans you’ll face in each stage are usually stronger than the foes you’ve faced, but these prolonged encounters can feel a little drawn out, especially if you’ve been perfectly executing your strikes. Thankfully, there are techniques that can speed up the process, such as sneak attacks (where you can aim at a titan if they haven’t noticed you) or hook drives (an evasive maneuver that you can use if you’re in the air).

Even freakin’ DAZ was disappointed in me when I had to have him save me.

Other than the main story battles, you can participate in Another Mode (with missions also available in Story Mode, confusingly). While you can use your custom character here, this is the place where you can utilize characters from the series as well, so if you’ve been dying to play as characters like Levi or Annie, feel free to go nuts here. You can also participate in online co-op, though in my experience I couldn’t get anyone to participate, so I had to utilize the AI to assist me. With these scouting missions, you will have to play two to five different maps in order to defeat titans and scan the area, with more locations opening up once you finish earlier battles. While this can suffer from repetition like in the story mode, the fact that you can play as different characters from the series (once you’ve unlocked them) is a nice bonus, and you can wipe the floor with some overpowered people early on.

Between battles, you can also develop friendships with characters from the series, by either participating in scouting missions or talking to them. These will grant you certain social scenes that are mostly lighthearted, and you can give contextual responses in conversation, much like the social link scenes in the Persona series. Rather than giving your opinion, the answers that align with the character with whom you’re conversing will grant more friendship points (e.g. inflating Conny’s ego or being concerned for Erin when talking with Mikasa). It’s a neat little feature, which differentiates Attack on Titan 2 from its predecessor. This is also where knowledge of events beforehand counts, because a lot of minor characters have a nasty habit of dying, and maxing out these social events are key to gaining new abilities you can use to enhance your character.

While Attack on Titan 2 is a mostly great experience in the story and gameplay, performance is where it starts to falter. One-on-one bouts with titans are great fun (especially in maps with a ton of buildings), but stick another one in there, and it becomes a mess. Aiming is less than stellar during these scenarios, and there were times when I had trouble annihilating my target because another titan was in my way. It’s cumbersome and inaccurate when more action is required. Additionally, there were numerous framerate dips when the gameplay heated up, and while it’s not a gamebreaker, it certainly puts a hamper on the experience. At time of launch, only the Japanese language track is offered, but the cast is back and almost everything is fully voiced, so it’s a nice touch to the package. In addition, you can turn off gore as this is a bloody title, but the splotches and fountains of titan blood really add to the experience.

Yeah, try and aim for one specific titan here and you’re in for a world of hurt.

While it does suffer from some performance flaws, Attack on Titan 2 is a wonderful way for fans of the anime and manga to relive the fight for humanity. With breathtaking gameplay and some great character interaction, you’ll eat this right up.

Elisha Deogracias is an aspiring accountant by day, freelance writer by night. Before writing for Gaming Trend, he had a small gig on the now defunct Examiner. When not being a third wheel with his best friends on dates or yearning for some closure on Pushing Daisies, he's busy catching up on shonen manga and wacky rhythm games. Mains R.O.B. in Smash. Still doesn't know if he's a kid or a squid.
Related Articles: Attack on Titan 2
Share
Tweet
Share
Submit