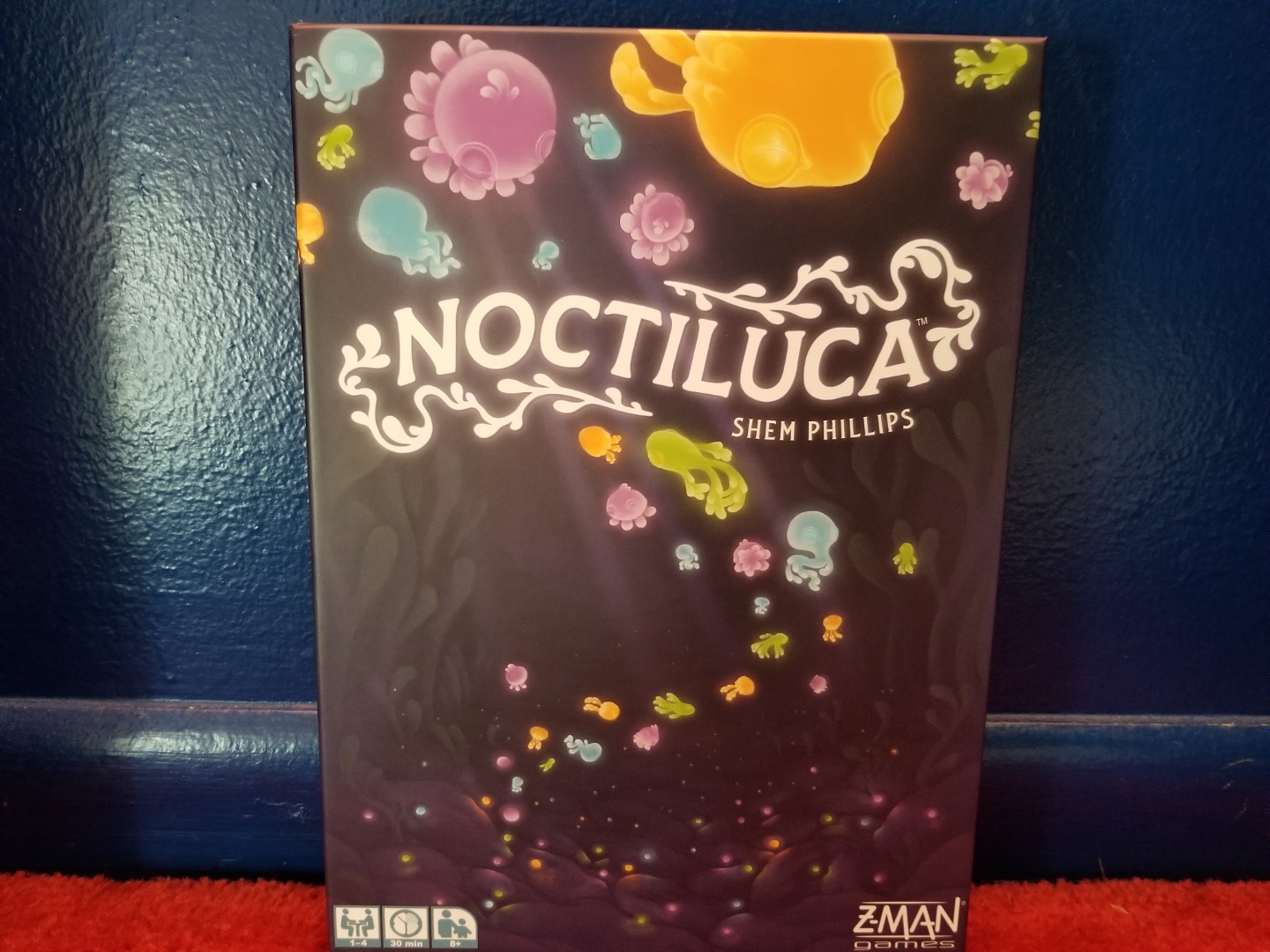 The ocean is filled with many wonderful creatures such as fish, dolphins, seals, jellyfish, and more. These creatures are a marvel to observe, and aquariums have made a habit of capturing them for aquariums and personal collections. Imagine if there were bright and colorful creatures unlike any other. Cue the Noctiluca, a majestic jellyfish-like species that people desire purely for their beauty. In the tabletop Noctiluca, capturing these beauties and storing them in jars for observation is your main goal.

Noctiluca is a tabletop game that can be played with up to four people, with the goal of collecting Noctiluca in order to fill up jars. You start off the game by setting up the board which consists of two rings that are each divided into multiple sections: an inner ring and an outer ring. You have to place four dice into each section of the inner ring and five dice into each section of the outer ring. It doesn’t matter what colors are placed and what numbers are facing up; the setup is designed to revolve around a random layout. My advice is to grab handfuls without looking at them before you place them. This ensures a random setup and prevents anyone from rigging the game by influencing what you’re playing with. The dice come in blue, green, orange, and purple varieties, representing the majestic Noctiluca.

After the board is ready, each player receives two jar cards randomly. These are the starting jars that you need to fill up, while the rest are separated into four decks, each consisting of a random assortment of jars. Unlike typical decks, these cards are all face-up in order to allow players to choose which one they want later on. Each jar contains a random assortment of colors that must be collected. The next step is each player randomly receiving a favorite card, which represents the color Noctiluca that rewards them extra points at the end of the game. Keep these favorite cards hidden in order to keep your secondary goal a secret. Next, there are gold, red, and brown tokens that must be divided into piles of their respective colors. The piles need to be organized in ascending order from top to bottom. Finally, divide the twelve pawns equally between every player. Now that everyone is prepared, it’s time to play! 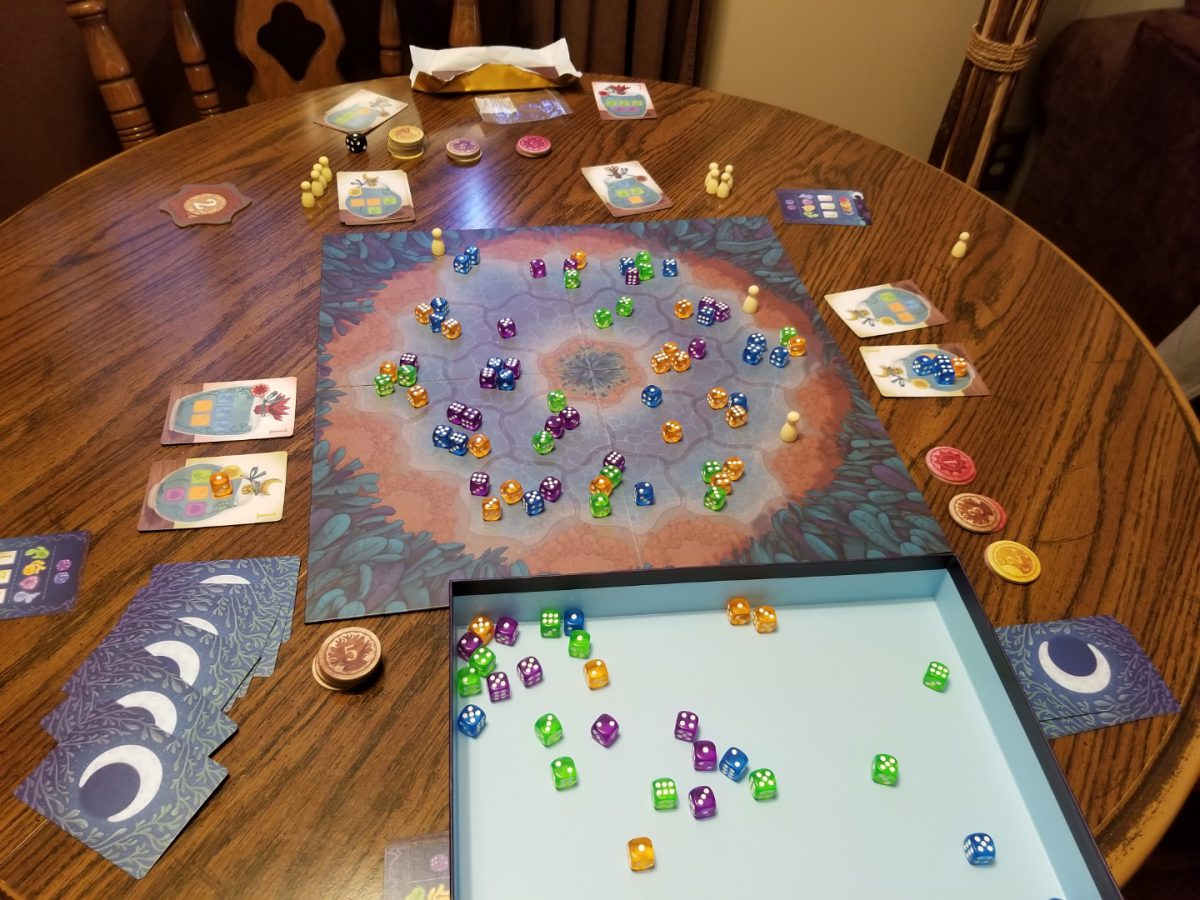 In order to make a move, you need to decide on a straight path from one shore to another (shores are represented by the outer circle sections). Next, you choose a number between one and six; you grab every dice on your chosen path with that number facing up. Make sure you place one of your pawns on the shore you started from; this shore can’t be used until round two. After collecting your dice, you must use them to fill up as many spaces of your jars as possible. Whatever dice you can’t use must be passed to the player on your left. They use everything that they can, and pass any extra to their left. The cycle continues until either all dice are used or every player has passed any remaining dice. If any dice still remain, they are discarded from the game. The fact that unused dice get passed to other players can have a big influence on your moves. If you have too many dice that you won’t use, then you’ll just end up helping out your opponents. This forces you to strategize and plan your moves in order to maximize helping yourself while minimizing helping others.

When a jar is filled, you take a token from the pile that has the same color as your card. For example, if the card has a gold moon, you grab the top gold token. As more tokens of a pile are taken, you reveal higher valued tokens. This means that later in the game you’ll obtain higher point values from piles. After you get your token, you discard the dice from the game and set the finished jar in a personal pile for scoring later. You then choose a jar from one of the four piles to replace the finished one. This ends your turn and the person to your left does their turn. This pattern continues until all players have placed all of their pawns. 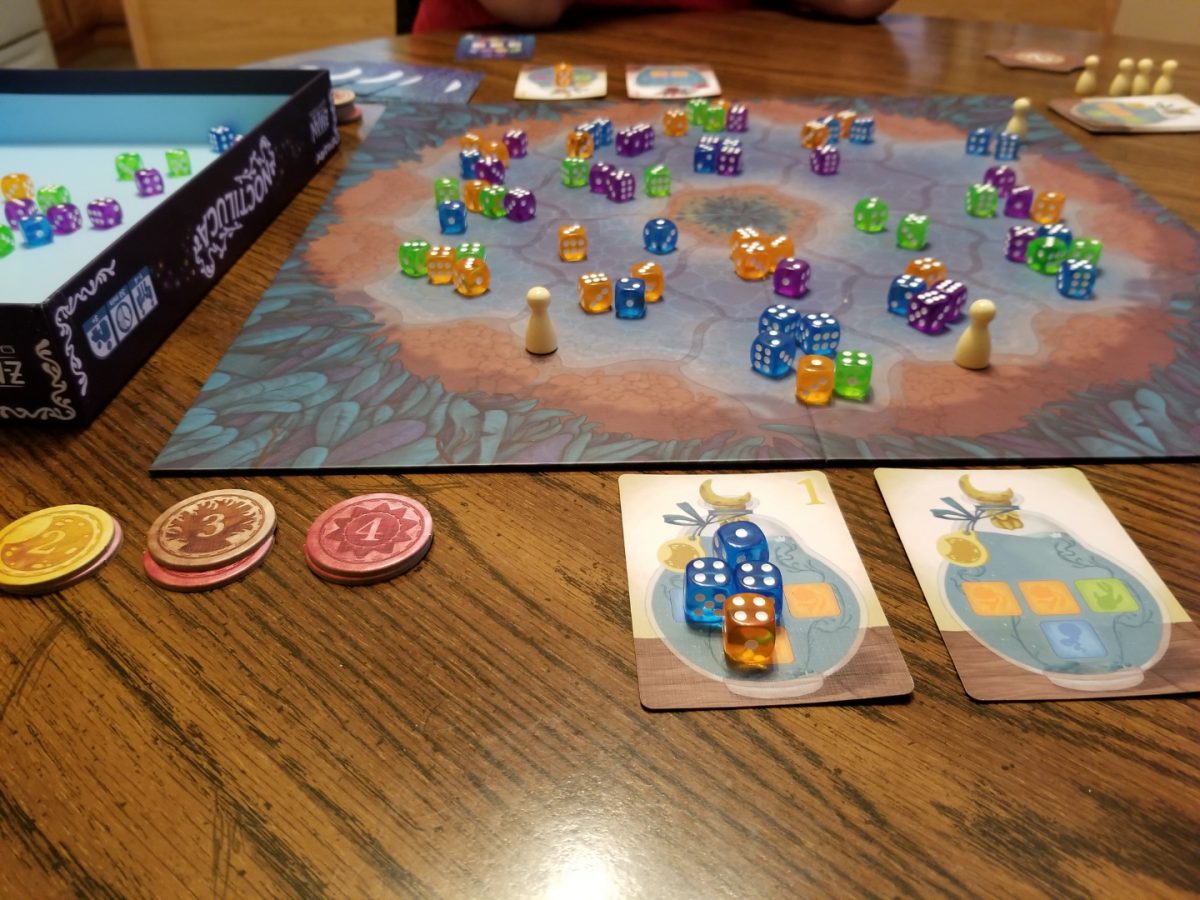 After every pawn has been placed, you need to set up for round two. The only thing you need to do is randomly place the dice on the board as directed earlier. Round two plays out like round one except you choose a different person to start. After round two has finished, it’s time for scoring. First, you need to determine who has the most tokens of each color. Whoever has the most tokens of a color earns a special token worth one point; three of these can be given out, one for each color. You’ll want to tally up the totals of each person’s tokens. Next, everyone needs to look through their finished jars; if they have a number in the top corner, you can add those numbers to your token total. Not every jar has a number, which unfortunately means that some of them won’t yield any additional score. Finally, players reveal their favorite cards. For every Noctiluca in your finished jars that matches your favorite card color, you get an extra point. This is where point values can get a big bump, especially if you focused on your favorite. This color total gets added to your other total, and whoever has the highest point value wins. It’s pretty exciting when you finish tallying and compare your scores. The results can end up a lot closer than you’d expect.

The design of this game, especially the aesthetic, is fantastic. As soon as I saw the box, I was intrigued, and after sifting through the pieces, I was excited to play. With 104 colorful dice, most of which will be on the board when you start a game, you’ll be treated to a prismatic experience. The dice are shiny and very pleasing to the eye; in fact, my friend really wanted to take some of them home with him. The board itself is shaped and colored to represent a large pool of water, which helped make the game more immersive. The art style of the cards is smooth, elegant, and relaxing to look at. In the looks department, Noctiluca easily nailed it. 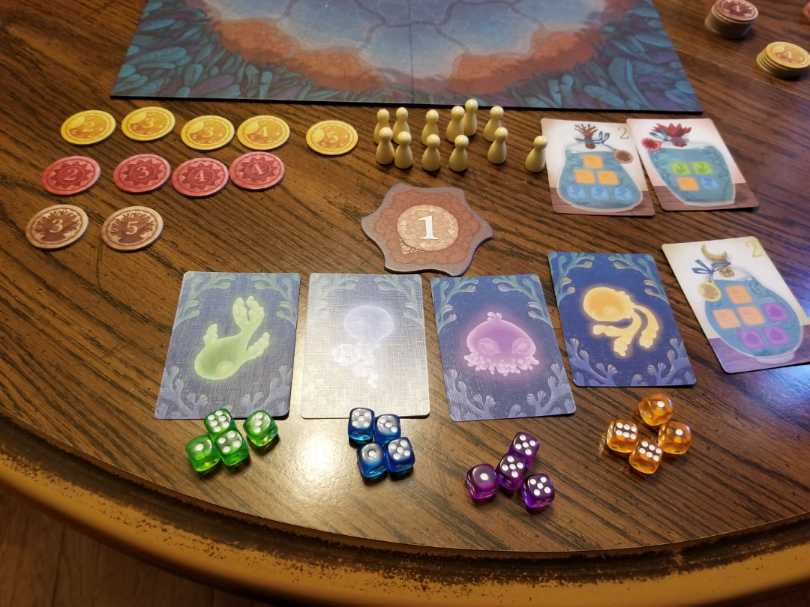 As for gameplay itself, Noctiluca is extremely easy to learn, which was a relief to us. There isn’t a long list of rules or variables to take into account. This makes the game very easy to pick up and play, regardless of whether you’ve played or not. The fact that the box and contents aren’t very large is a huge plus as well; you can carry the box in one hand without a problem. The point is, Noctiluca is a perfect pick up and play game, both figuratively and literally. If you want a visually pleasing tabletop with simple rules and a fair amount of strategy, the come dive deep into Noctiluca.

Noctiluca is a dice collection game with the goal of filling up jars with colored dice. The aesthetics of the dice, cards, and board are pleasing and stunning. The rules are easy to learn and employ a risk/reward aspect.

Codi loves to play video games and watch movies. He will watch almost any kind of movie just to experience them. His ideas take inspiration from the shows and movies he watches, and games he plays. He also loves a good pun.
Related Articles: Noctiluca
Share
Tweet
Share
Submit