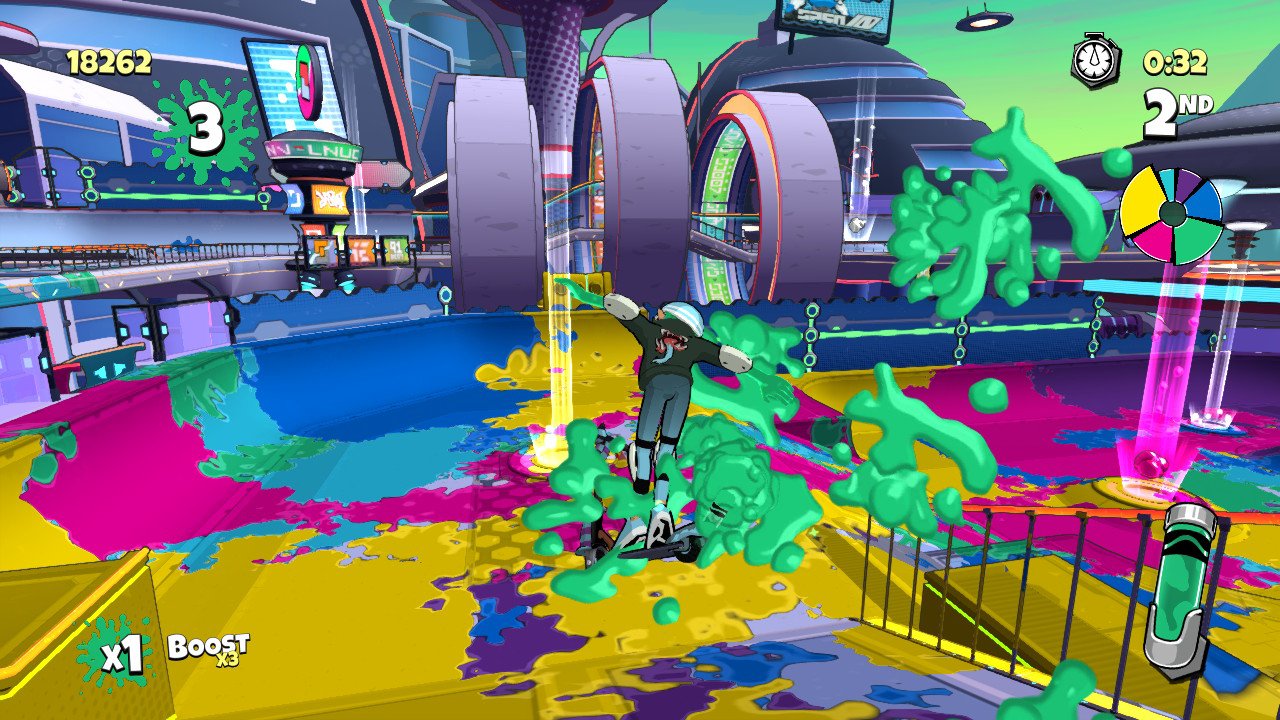 I didn’t know that a game featuring Crayola and dabbing would be one of the better sports experiences this year, but here we are. Crayola Scoot is an oddly satisfying treat for those that missed the good old days of Tony Hawk Pro Skater, and it comes packed with an addictively infectious soundtrack, entertaining gameplay, and a vibrant mood that appeals to kids and adults alike.

We’re going to dab on them haters today in this review.

Crayola Scoot puts you in the role of a boy or girl that hopes to take the Color Cup from the reigning Legends in the city. In order to do this, you’ll have to move up the ranks of scooter glory as you participate in different events across 12 locations spread within 3 worlds. While the events you can participate in are limited, you can unlock more things to do by clearing events and gaining stars to level up. It’s a basic barebones plot that works in this sports game, as the light plot is just a means to an end concerning the gameplay.

If you’ve ever played a skateboarding title, the game is similar to this system, though this time you’re scooting instead of skating. Throughout the different locations, you’ll be able to boost, do tricks, and grind across the different structures that are ripe for points. Taking a cue from games like Splatoon or De Blob (and contributing to the “Crayola” part of the game), painting is a big part of this title. By performing techniques and activating special points across the locations, you’ll be able to splash paint wherever you are, creating an explosion of color in your vicinity. This concept may have been used in the aforementioned Splatoon, but it’s always fun to color a blank canvas in the form of a skate park.

I really enjoyed the accessibility of the gameplay system for Crayola Scoot. While there are a handful of tricks to choose from, you’ll need to master each and every one of these to chain combos together (from tackling tricky techniques and landing some grinds while also catching some air), though it’s not an overwhelming process once you get the hang of it. I do have to make a note of the controls, which are unfortunately not mappable, so it will take some time to get used to, especially when playing the game in handheld mode. Flicking the control sticks to maneuver my scooter and perform tricks weren’t too tough but switching between boosts and grinds made my hands feel like pretzels at times. Luckily, this is alleviated with some practice or through a pro controller.

The variety of events in the game is also an entertaining mix. My favorite mode of the game, Color Frenzy, is similar to a Splatoon’s Turf War, where players will have to perform tricks and activate Wonder points (special triggers that will help with painting in your color) in order to fill the location with their colors. This creates a fast-paced battle as players will have to keep doing tricks while also making sure that their Wonder points aren’t overwritten by an opponent’s paint. This mode can be done solo free-for-all or in a 3v3 squad, the former of which is a chaotic but very entertaining battle. Considering you’ll have to contend with doing tricks in order to paint, this creates an odd mechanic that sets it apart from its competition.

Aside from that, Trick Runs are also pretty great, as they’re more standard “score as many points as possible” missions that test your skills in chaining combos together. In addition, you have S-C-O-O-T battles, which is like the game H-O-R-S-E, except you’ll have to one-up your opponent by making a higher score in one combo. These are a highlight of the package as well, as you’ll need to memorize the terrain of each location in order to make a high-scoring combo. Flubbing an attempt or failing to land a higher score adds one letter to the SCOOT counter, and completing the word means elimination. These are great missions that enable a sense of risk and reward, as well as mind games: Should I attempt to make that crazy bar flip/grinding combo if it means I could mess up, or should I go for a practical combo that can easily be one-upped?

The other two mission types are a mixed bag; Crazy Crayons is a mode that plops crayons into each location, and you’re racing to find them. It’s a type that’s more open-ended, but I didn’t really feel like it demonstrated the mechanics of the game well. You also have Splat Tag, where a random person is the Splatter and must chase the others in order to convert them to their color. These two mission types feel a bit empty compared to the vibrant chaos of a Color Frenzy or Trick Run, and I tended to save these mission types for last when trying to complete the game.

While the modes offered are solid for the most part, I was surprised by how competent the AI was and how crushing it could be on hard mode. While easy mode is a breeze for pretty much everyone, I had trouble with the normal difficulty setting for the first couple of hours, and hard mode will destroy you unless you’re a skating game veteran. This carries over to the Legends in the game, other characters that you’ll challenge in a S-C-O-O-T battle once you level up sufficiently. While the first few of the opponents are pushovers and can’t chain combos, the final ones will be excruciating for those who haven’t mastered the mechanics, as they’ll take advantage of their location and make some ungodly scores. They’re challenging AIs that I don’t see often in a children’s game, and this contributes to the all-ages appeal that Crayola Scoot provides.

Y’know, R.O.B.B.I.E. murdering me in terms of this S.C.O.O.T. battle violates the first law of robotics.

The visuals of the game aren’t aiming for a photorealistic feel but capture a whimsical and cute atmosphere. Staying true to the Crayola name, each location is brightly colored, with paint splotches brightening up the place in a streak of colorful carnage. The game runs at a pretty smooth clip as well, and I didn’t observe much slowdown in docked or handheld mode, even with six characters scooting around with a bunch of paint spilling everywhere. Quite frankly, I’m surprised that the game runs with such great performance, and this really raises the bar for the E-rated third-party market.

I’d be remiss if I didn’t mention the outstanding soundtrack of Crayola Scoot. Quite simply, it’s what you’d get if a bunch of Electro Swing musicians got together and made it. The selections are a mix of upbeat swing music with a twinge of electronic beats throughout, and the result is something that complements the frantic action of the main gameplay. It’s a beautiful harmony, and I really want to purchase the soundtrack should it ever become available.

I really wish that there would be more customization options in the future.

While the visuals and technical performance are excellent, the amount of customization is rather limited, which is a shame since sports games are usually rife with character outfits and unlockables. While you will be able to buy a variety of gear and clothing from Legends after you beat them (and you can earn coins in missions), there’s only a handful of options available. You also can’t change the facial appearance of your character aside from the skin tone and hair color (the latter of which is affected by the color of paint you want to use). Mission length for the main campaign clocks in at two minutes apiece as well, with no ability to change ruleset or time other than in the Arcade (which allows local, not online, multiplayer as well as rule changes and a free-scoot mode). The game could have used a little more personalization with its features.

Crayola Scoot is a wonderful hidden gem that caters towards an all-ages demographic with a snazzy sense of style. With a great mix of missions, a killer soundtrack, and challenging opponents, you can color me shocked: This is something that kids and adults will love.

Elisha Deogracias is an aspiring accountant by day, freelance writer by night. Before writing for Gaming Trend, he had a small gig on the now defunct Examiner. When not being a third wheel with his best friends on dates or yearning for some closure on Pushing Daisies, he's busy catching up on shonen manga and wacky rhythm games. Mains R.O.B. in Smash. Still doesn't know if he's a kid or a squid.
Related Articles: Crayola Scoot
Share
Tweet
Share
Submit