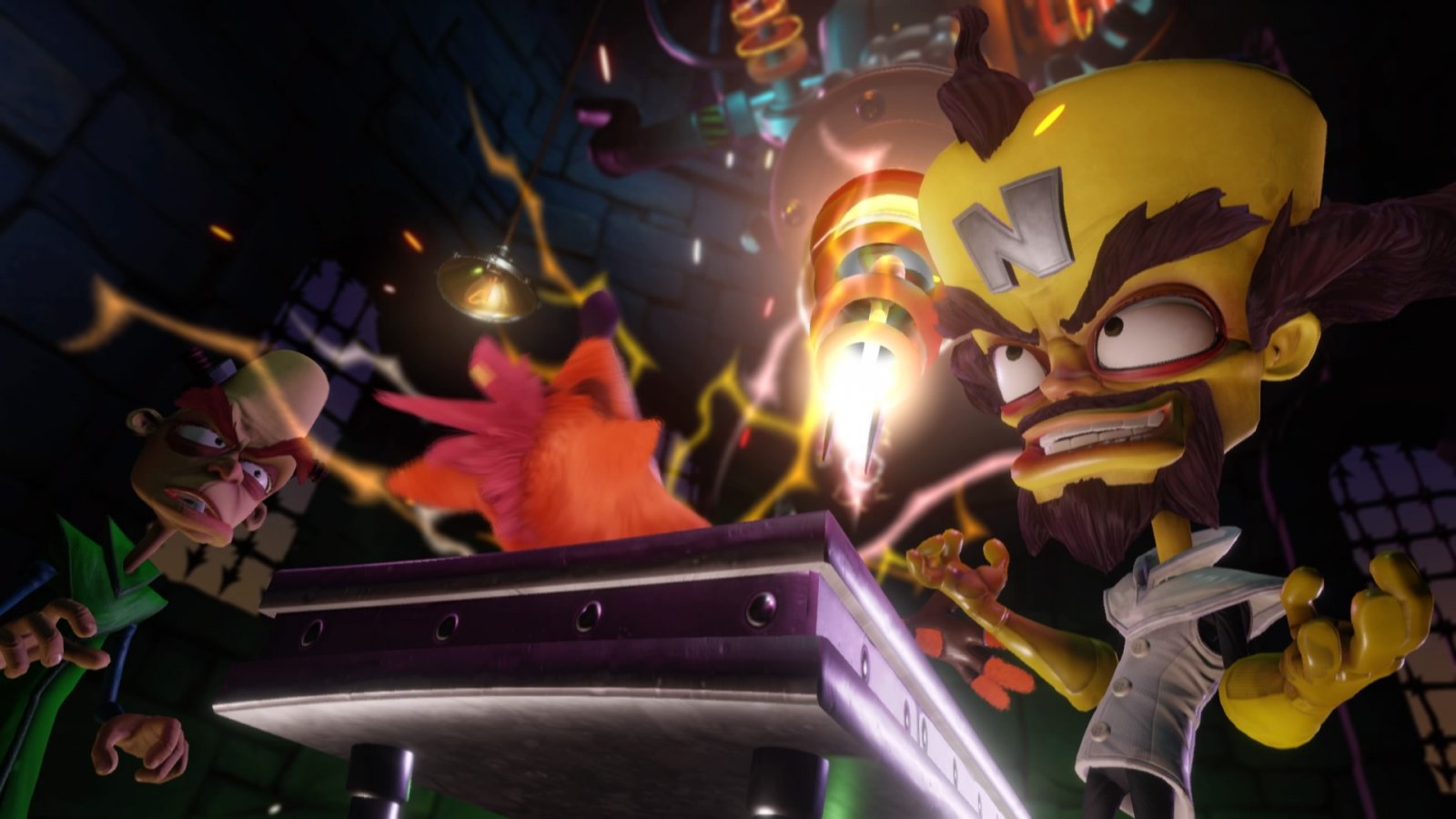 If you owned a PlayStation in the late 90s, there is a high chance you were involved in the tail-end of the “mascot war.” This was a time where video game developers wanted characters for their games that would rival the popularity of Nintendo’s Mario or Sega’s Sonic the Hedgehog. In 1996, Sony’s debut console finally had what many to be considered one of its most iconic characters: Crash Bandicoot. In the present, fans have been begging for a “proper” Crash Bandicoot game for years in the vain of the first three. With his last console entry, Mind Over Mutant, receiving lukewarm reception in 2008, hope seemed lost for our orange marsupial. Finally, at E3 2016 during Sony’s Press Conference, Crash Bandicoot was announced to be receiving a complete remaster “from the ground up” for the first three games in the series. But, does Crash Bandicoot: N. Sane Trilogy live up to our nostalgic expectations, or does it belly-flop onto its face as a clear Crash-grab?

I’ll come clean with everyone. My first experience with Crash Bandicoot was not its first entry, but its second: Cortex Strikes Back. I have fond memories of running around the warp room, figuring out which boxes I am missing to earn that elusive gem at the end of the level, slide-dashing and jumping away from obstacles, and of course, dying. Part of the charm of the Crash Bandicoot series is watching Crash die in a variety of silly ways, some of which aren’t even a death. They’re just embarrassing, but still cost you a life.

In the N. Sane Trilogy, Crash’s deaths all return in glorious HD, some of which are easier to understand with the visual overhaul. For example, Crash Bandicoot: Warped, the third game, had a segment where a monkey is carrying a stack of pots. If you run into him, the pot falls onto your head and the monkey dances and laughs at you. On the PlayStation, I didn’t think he was a monkey, but a man in a strange coat, but his form is much clearer now.

I was surprised with how incredible the visuals worked in this collection. Most of the enemies fit their environment well, as they stay true to their 20-year old counterpart and in some cases, feel even more cartoony. The cutscenes have been overhauled too: in the original, these cutscenes came off as cheesy with poor voice acting and stiff movements. Vicarious Visions took the time to give the characters small quirks in their movements to give them more personality. When N. Brio is talking to Cortex in the lab in the beginning of Crash Bandicoot, he has more nervous tics; when Coco’s laptop battery is fried, she slams her fists on the keyboard before stressfully waking up Crash to ask him to get her a battery; when Cortex is telling Crash that Uka Uka is helping him, the two villains trade glances, something that doesn’t happen in the original Crash Bandicoot: Warped. The visuals are improved tremendously, but how does the gameplay hold up? All three games play almost exactly like the PlayStation titles, but that’s not always a good thing.

Since I started with Crash Bandicoot 2: Cortex Strikes Back when I was younger, I had only played a few levels of the first game prior to this collection. The first Crash Bandicoot has aged like fine milk, mostly spoiled. Cortex Strikes Back introduce sliding, crouching, and a faster pace. When you’re used to these mechanics, Crash feels slow in his debut game, but at least his jumps feel tight. And that’s a good thing because Crash Bandicoot requires a lot of precise platforming. Often, I felt like the deaths were the results of either platforms not synced for me to jump to them easily, or enemies being placed in inconvenient positions. There were several enemies that looked like they could be jumped on, but they resulted in my death.

What was perhaps the most frustrating aspect of the first Crash Bandicoot was collecting gems. To get the best ending of each game in the trilogy, you need to collect every gem and you collect gems by destroying every box in a level. Sometimes, these gems are behind secret paths that you unlock by finding colored gems in secret locations in other levels. In Cortex Strikes Back and Warped, the level select shows you when there is a possibility that you will need a colored gem to reach the secret area with the secret gem. In Crash Bandicoot, however, there is only 1 gem per level, and you often need to obtain gems from later levels to unlock the paths to the remaining boxes. Of course, you won’t know this until near the end of the level where you’ve already spent time trying to get every box only to learn that you’re unable to get all of the boxes this time. Not to mention, these colored gems aren’t obtained through secret areas, but by clearing specific levels without dying and while smashing all of the boxes. This is just one of many frustrating aspects that makes the first Crash Bandicoot incredibly difficult to go back to.

When it was time to move onto Cortex Strikes Back, it felt like a breath of fresh air. Crash moving faster with the ability to slide and crouch gave the series the touches it needed to feel complete. In addition, the gems in most of the levels could be obtained your first time through it with some rare exceptions. Each level has a crystal for you to obtain that operated as the main MacGuffin of the game and allowed you to play any 5 levels of a world in the order you prefer. There were some occasions where enemy placement felt unfair, such as an enemy you cannot jump on just after a segment with a shrink ray, but this time, I felt like most of my deaths were justified.

Previously, bosses were only accessible in-between warp rooms. However, the warp room now had an empty space to fill since the save area was axed to make saving more simple. Now, when you collect 5 crystals in a warp room, this space reveals a boss room that you can access again without having to hold triangle in between warp rooms. Crash Bandicoot 2: Cortex Strikes Back aged much better than its predecessor, but did Crash Bandicoot: Warped get the same luxury?

The short answer is mostly: Crash Bandicoot Warped did age well with some exceptions. Warped plays similarly to Cortex Strikes Back, but there are a few differences. Warped has a large portion of non-conventional levels such as driving a motorcycle, scuba diving, and airplane flying. The airplane levels were short, but sweet, while the motorcycle levels are frustrating in the wrong ways. To get the crystal here, you have to race to first place against cars that are almost the same speed as you. In addition, it doesn’t feel like you have much control of your bike as you sway from left and right. There were far too many of these dreaded segments the further I got into the game.

Crash Bandicoot: Warped did something unique after its worlds, however. Each time you beat a boss, you obtain an upgrade. These range from a shockwave from your belly-flop to the ability to run quickly. These upgrades are welcomed and make completing future worlds exciting. When you finally earn the ability to run quickly, you can now successfully run against one of the most interesting things Warped added to the series: time trials.

Time trials are available for each level you’ve earned a crystal on. If you complete the time trial under a certain amount of time, you can earn one of three relics: sapphire, gold and the incredibly-difficult-to-obtain platinum. Running through a level without dying is a challenge enough, but the time trials are incredibly fun and engaging to attempt, with some boxes containing ways to stop the clock for up to 3 seconds. If you obtain enough of the relics in Warped, you will be treated with a reward. The N. Sane Trilogy took these time trials to a new level, 54 of them to be exact: we can finally do time trials in Crash Bandicoot and Cortex Strikes Back.

Adding time trials to the earlier games greatly increased their replayability and while I may not be putting in too much time in the future in platinuming all of the levels in Crash Bandicoot, I’m excited to attempt this challenge in Cortex Strikes Back. The time trials function exactly how they do in Warped, complete with a platinum score to beat. In addition, there are also online leaderboards for you to compete for the best time, worldwide. And of course, this isn’t the only addition the trilogy has brought.

In Warped, Coco was playable during a few of the levels, but she was restricted to riding on a tiger, flying a plane, and riding on a jet ski. In the N. Sane Trilogy, Vicarious Visions has gone through the effort of making Coco playable in all of the non-vehicle focused and non-boss levels. While she may seem like just a reskin for Crash, it’s still nice to see and gives the series more personality when you can play as either of the siblings. She even comes with her own victory dance.

Unfortunately, Coco does not have as many death animations as Crash does. Most of the violent deaths are replaced with her usual “angel” death animation, while Crash can be popped, burned, or disintegrated. She does have a few unique to her, such as being crushed into her laptop, or using it as a shield when she fails to collect all of the boxes in Crash Bandicoot.

So, does the original Crash Bandicoot trilogy hold up? Two-thirds of me says “heck yes.” The first Crash Bandicoot may not have aged well, and there are portions of Cortex Strikes Back and Warped that are frustrating, but I had a ridiculous amount of fun with them. I felt encouraged to go back to find the remaining gems, see my best time, and explore the secret warp rooms. Vicarious Visions did a great job with remastering the Crash Bandicoot trilogy. Maybe we can see our favorite purple dragon done with the same amount of justice?

Crash Bandicoot: N. Sane Trilogy is an incredibly well done remaster from the ground up and shows that while the first Crash Bandicoot may have aged poorly, Cortex Strikes Back and Warped are incredibly fun games, and being able to play them all with stunning new visuals and as Coco is the cherry on top to a fantastic collection.

Sean Anthony likes to combine two of his passions: gaming and writing. Gaming has been a huge part of his life ever since he played his first game as a child, Kirby's Adventure. He aspires to have his name attached to an article that makes the whole world go, "Huh, that's neat, I guess."
Related Articles: Crash Bandicoot N. Sane Trilogy
Share
Tweet
Share
Submit