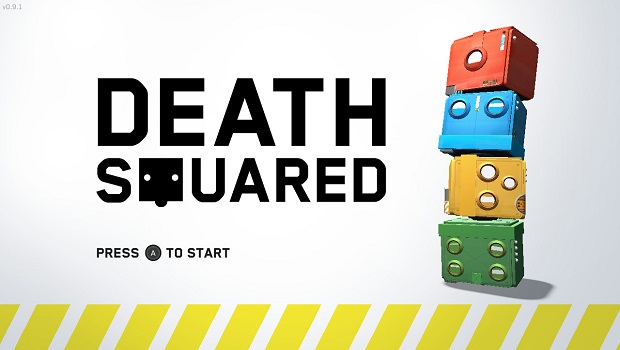 I’m secretly convinced that Nintendo wants us to break every relationship in our lives. While games like Mario Kart and Mario Party are great fun, who hasn’t wanted to throw their controller at the nearest wall when hit by a blue shell or getting their lovely stars stolen by a Boo? I’d imagine that’s how Karen feels when she plays single-player games on a rooftop with her friends around her.

THIS IS THE LAST TIME I’M REFERENCING HER, OKAY?

The Nintendo Switch has provided some great multiplayer experiences (such as the aforementioned Mario Kart 8 and 1-2 Switch), but also provided Snipperclips, which while a great game to showcase the console, is legitimately a relationship tester (as seen in Sean’s review). Likewise, SMG Studios has released its puzzler Death Squared for the Switch, and it’s an adequate puzzler that is a good multiplayer experience if you don’t care losing your friends after a few hours.

Death Squared follows the adventures of entry level employee David Venezuela and his fellow AI buddy IRIS as they test out a couple of robotic cubes in a gauntlet of 80 puzzles. Each puzzle is a single-screen affair, with an isometric top-down look to it all. Both cubes are controlled by a player, and you can either play alone or with a friend as each cube is solely controlled by one Joy-Con’s control stick. I really liked how Death Squared takes advantage of the Switch’s control scheme, and it’s simple to pick up and play.

What isn’t simple, however, are the puzzles themselves. While they start out pretty easy (with the goal to have both cubes stepping on a certain goal point), they’ll go from 0 to 100 pretty quickly, and the second one cube dies, the puzzle resets itself. Coordination is key, as one slight misstep will cause you to start from scratch instantly. Add things like lasers that will kill you and blocks that move dependent on one cube, and you’ve got yourself some spicy puzzles.

While I loved the variety of puzzles offered, I couldn’t help but notice that it really isn’t catered towards a relaxed co-op environment. Like Snipperclips, the real difficulty lies in the players rather than the game. I played with my brother, and for every puzzle where we could communicate the answer perfectly, there were three others where we kept yelling at each other to move out of the way, getting punted out of bounds by obstacles or eviscerated by random spikes popping out of nowhere. The fact that there’s no way to adjust the camera for some of the puzzles is a bit disappointing, as it would have helped a little bit with maneuvering. The game is fun, but will make you fight with each other to experience it.

However, one thing that stood out to me was the narrative between puzzles. The in-game banter between David and IRIS is laugh out loud funny at times and really gives Death Squared some character. It also ties in with the increased difficulty in later puzzles as David tinkers with the simulation and sabotages the experience for the cubes. (Poor cubes.) It’s reminiscent of the stronger narrative elements of Portal, with IRIS acting as a grounded and sarcastic foil to David’s naïve newcomer nature. The story is witty and takes a few turns near the end of the game, but it ties up the story mode puzzles nicely.

The sardonic wit of the in-game intermissions and conversations are reminiscent of Portal 2.

As frustratingly fun as the main story mode is, there’s also a party mode for four players. While forty puzzles for four players sound like an interesting proposition, it turns out as follows:

Me: WHAT THE HECK, YOU DID THAT ON PURPOSE. WE WERE ALMOST DONE.

*Cue weeping and gnashing of teeth*

If coordinating your moves with one other person is hard, imagine puzzles requiring three other people. In theory, it should be an extension of the interesting experience that two players provide, but in practice it’s more of a misstep, with precise movements being a necessary requirement. Oddly enough, every problem in the story mode is exacerbated with this mode, and it just turns out to be less of a party and more of an exercise in futility. Good luck cooperating with that one player who keeps intentionally falling off the screen just to piss your group off. If you can beat this mode before your living room turns into something out of Lord of the Flies, I salute you.

Drawing another comparison to Snipperclips, once you finish up the main puzzles, there’s really no motivation to return to them other than a few hidden bonuses lying around. It’s also a bit frustrating that unlike that game, you have to tackle each puzzle sequentially, rather than choose from a group of puzzles to finish. This means that I was stuck for a good ten minutes on one puzzle, only to clear the next three in the same amount of time. It would have been nicer to finish puzzles in groups of 10 rather than power through each one and hope I got an answer. While there isn’t much replay value for the main campaign, SMG Studios included some new levels exclusive to the Switch version of the game, so once you finish the story or party modes, PREPARE TO D—erm, have a little more fun!

Death Squared is a great example of a game that fights you every step of the way. However, its sharp and witty narrative mixed with simple pick-up-and-play controls guarantees that you’ll have some frustrating fun with a partner. Just make darn sure to leave your best friends out of party mode if you want to stay that way.

Elisha Deogracias is an aspiring accountant by day, freelance writer by night. Before writing for Gaming Trend, he had a small gig on the now defunct Examiner. When not being a third wheel with his best friends on dates or yearning for some closure on Pushing Daisies, he's busy catching up on shonen manga and wacky rhythm games. Mains R.O.B. in Smash. Still doesn't know if he's a kid or a squid.
Related Articles: Death Squared
Share
Tweet
Share
Submit