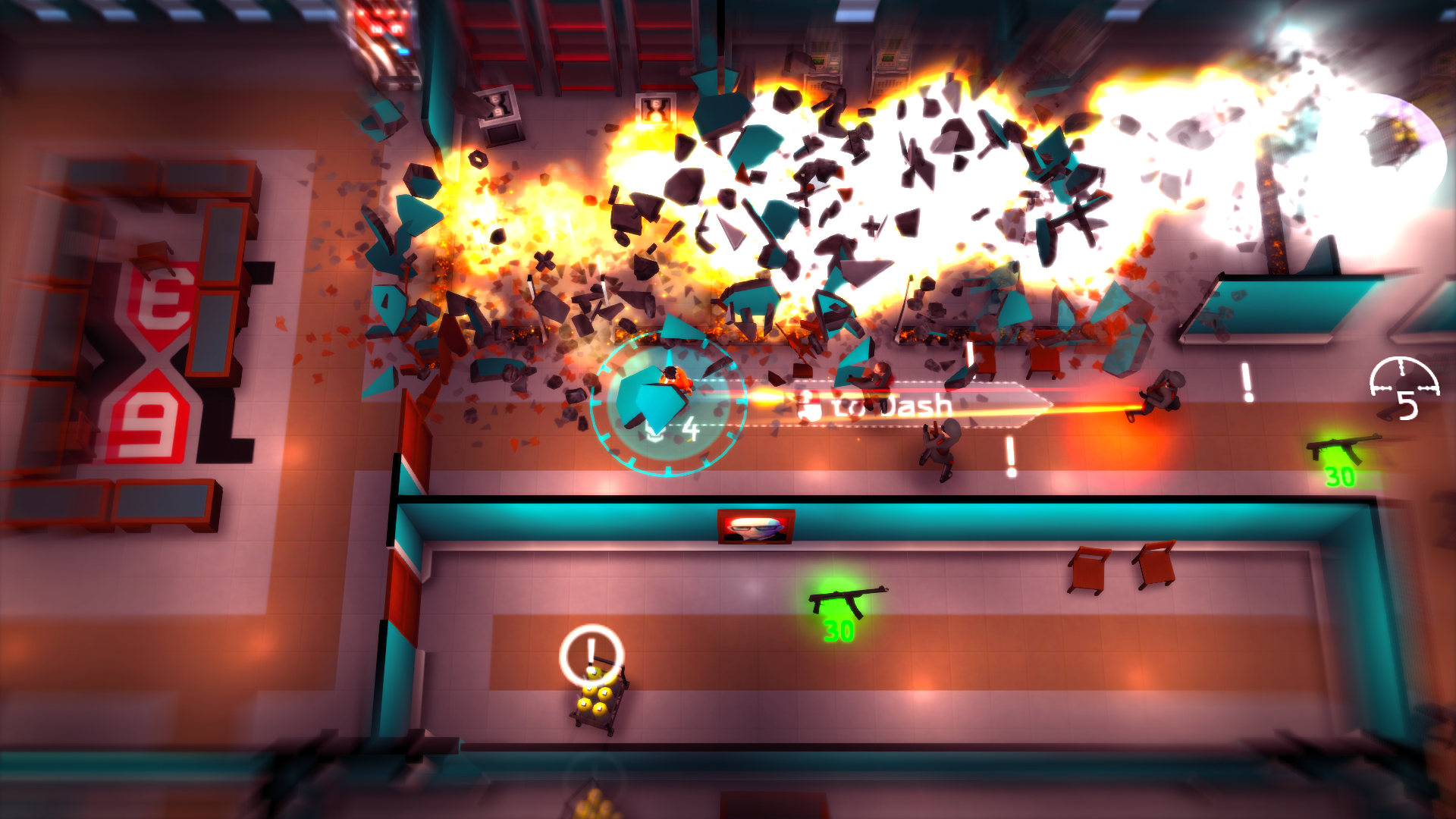 Time Recoil is one of those games that does a single element exceedingly well to the detriment of everything else, and that’s not necessarily bad. Inspired by recent hits like Superhot and Hotline Miami, according to indie developer 10tons, Time Recoil is part twin-stick shooter, part puzzle game. Its main mission is to make you feel like a badass, and while that’s where its ambition ends, it’s still an entertaining ride that’s worth taking.

If you’re a fan of the cyberpunk genre, the story won’t sound like anything new: you play as a former scientist with time powers who must carry out missions for a shadowy organization in the hopes of saving Paris from apocalypse. The narrative plays out through comic-book style speech bubbles and minimalist set changes, and consciously takes a backseat to the super-satisfying mayhem of its gameplay. It’s merely a vehicle by which you travel between expertly designed levels.

Each level begins with someone asking you to go back in time to kill or capture a target, collect information, or detonate bombs. There’s a few twists and turns along the way (time travel consequences that occur and then are resolved in the blink of an eye) but the game doesn’t want you to linger on why you’re doing what it tells you to. Time Recoil’s philosophy is that the game is more fun if you don’t try to make sense of it.

And let me tell you: it is a lot of fun. There’s nothing quite like triggering chained explosions and shooting bad guys in slow motion, destroying the stylish, plastic-looking 3D models with abandon.

Pictured: me, trying to make sense of all this madness.

The controls are intuitive and simple. You move the protagonist with the left stick and aim your weapon with the right.  As you kill consecutive enemies, you gain access to increasingly powerful special attacks, such as being able to crash through walls or open up wormholes that obliterate everything around them. If you’re particularly efficient, time will freeze for a few seconds, providing brief invulnerability as you skirt around obstacles or snipe targets before they’re aware of your existence.

It’s not the kind of game that’s meant to be savored and absorbed slowly. It wants you complete it as quickly as possible, which is perfectly feasible once you’ve mastered it. You can even see how you stack up against other players in the game’s built-in leaderboards, a tantalizing bonus for gamers who are fascinated by or skilled at speedrunning.

The game throws new challenges at you as you progress, like grenades, lasers, or enemies that can only be hit at specific angles. Puzzle elements come into play when it becomes necessary to swap out guns, open different doors, or eliminate enemies in a certain order to complete your objective. One memorable sequence involved navigating several locked doors and corridors, blasting through walls, killing armored soldiers while their backs were turned, and taking pains to conserve my limited ammo. Occasionally I had to intentionally kill the protagonist when I realized completing the stage was impossible due to one mistake or another.

While the segments are challenging, they’re short and sweet, and the gameplay is its own reward. You have one hit point, but if you die you almost instantly respawn at the beginning of the segment, so I didn’t mind replaying certain levels a few dozen times. Time Recoil is a celebration of trial and error, muscle memory, and the satisfaction of doing a little better each time. It’s not trying to punish you.

Time Recoil isn’t going to redefine the cyberpunk genre, win awards for its writing or make players philosophize on the ethics of time travel. It’s a satisfying blitz that wants to chill you out and challenge you, and that’s enough.

Time Recoil isn't going to redefine the cyberpunk genre, win awards for its writing or make players philosophize on the ethics of time travel. It’s a satisfying blitz that wants to chill you out and challenge you, and that's enough.

Taylor is as eclectic as her taste in video games, and she appreciates aesthetic and a good OST. She has a BA in International Business Management she doesn't know what to do with, and until recently helped immigrants and refugees learn English.
Related Articles: Indies, Time Recoil
Share
Tweet
Share
Submit