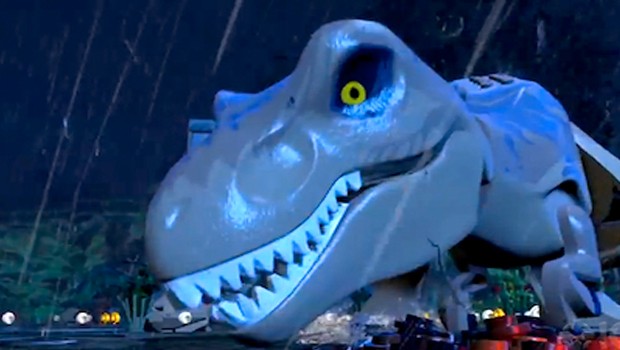 Lego Jurassic World is a love letter to fans of the iconic film franchise. The moment Jurassic Park’s theme song started I was instantly back in 1993 and nostalgia wrapped around me like a warm fuzzy blanket. This game was more than a take on a franchise, but rather a way to tell the stories from beginning, to the original sequels, right up to Jurassic World’s recent debut. From the raptors in the kitchen scene, to the cliff hanging jeep, and the introduction of the first genetically created dinosaur, all the major and iconic scenes are there.

Unlike other recent franchises that have been given the Lego treatment, you do not have to beat the games in chronological order following the movies. This is most likely due to the co-release with the movie Jurassic World and how many people might want to jump straight into the newest installment. Although this I felt was actually a nice touch, for me there was no resisting playing the full game in order due to my love for the first two movies.

The newest addition to the Lego series does not add much to its basic formula. Most of the game revolves around breaking items and rebuilding to continue your progress. The are also miniature puzzles throughout, like finding food for a sick dinosaur, that seem to repeat throughout the game and by the end it has a feeling of been there and done that gameplay-wise. That is one of the biggest downfalls of the game. Special characters also have different skills, like jumping higher, digging through dino poop, and growing plants, that help with the games relatively easy puzzles.

The biggest change to the game from previous installments is the ability to play as a dinosaur. They are fantastically created and each dinosaur really feels grounded and fun to play. Playing a velociraptor was unique because of their intelligence. They can pounce and even build and figure out puzzles like humans. This was a major contrast to the bigger dinos like the triceratops that felt heavy and strong, using force to get through objects and progress. The addition of playing as the dinosaurs not only helped break up some of the monotony of the repeating puzzles but also felt so well planned and refreshing, easily the most enjoyable mechanic to any Lego game in recent years.

The cutscenes, graphically, are artfully crafted. They stay very close to mimicking clips of the actual films but with great humor and wit thrown in. Everything is Legofied and it makes for some great nostalgic moments with some new laughs on added. Also, any more adult oriented material has been changed to be completely kid friendly, which was great for someone like me. It was an excellent way to bond with my child (2 years old) and have him experience a franchise that changed my life, while cutting out the inappropriate content. Also, certain graphics outside of the cutscenes have had an overhaul from previous games. Everything looks crisp and nice, and the rain effects in the first game are really awesome to play through.

The sound however was one of my biggest complaints, especially in the first three games following Jurassic Park, The Lost World, and Jurassic Park III. The dialogue is mostly sound clips from the movies, which was fun to hear those classic lines by the original cast, but most of the time it felt way out of place. Having audio from a movie with other things going on or in a different setting does not translate well as audio in another format. While outside talking, it may sound like the are in a tunnel, or suddenly it may sound like a character is walking away while the Lego character hasn’t moved. In theory it is a great idea but it really did not fully pan out for me and left me disappointed. They also use the main theme for Jurassic Park so often in different ways it really loses its appeal which I never thought was possible.

Some of the features that have plagued previous Lego games in the most fundamental ways have also unfortunately returned. The wonky and sometimes odd camera angles can make the easiest jumps really difficult, and could be near impossible for younger players. Some of the puzzles blend in and can take awhile to actually see and figure out what you need to be doing, And the controls are just not as tight as they could be, making platforming tougher at times than it needs to be.

Lego Jurassic World is full of nostalgia for fans of the franchise, while still highlighting the new film. It is the most refined Lego game and even with its downfalls it is still full of fun and charm.

Lego Jurassic World is full of nostalgia for fans of the franchise, while still highlighting the new film. It is the most refined Lego game and even with its downfalls it is still full of fun and charm.

Growing up in a small Colorado town, Bryan has always had plenty of time to play games. PC is his first choice of tech followed by the PS4. Graduating at 16 Bryan knew he wanted to be a writer and wanted to combine his love of games into that and found Gaming Trend in 2012 where he quickly became a member and started writing for them as soon as he could. He is still at Gaming Trend, but now has 2 kids, a puppy, and a lot less time to play the games he loves, but he always finds a way to get back into gaming.
Related Articles: Lego Jurassic World
Share
Tweet
Share
Submit