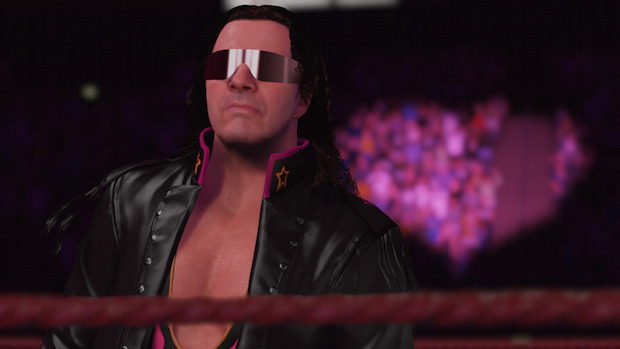 After the first 2K-published WWE game, it was clear a serious change was needed. The franchise’s previous installments, WWE ’13 and WWE ’14, were both solid and featured modes built to extract sweet nostalgic enjoyment from wrestling fans. That was lost last year, but it seems to be one of the major focuses in the newest iteration, WWE 2K16, as there is an entire mode dedicated to one of the strongest personalities to ever wrestle: ‘Stone Cold’ Steve Austin. The changes did not stop there, as the MyCareer mode has received a bit of an overhaul, with more focus on your actual personality and how you react with the roster surrounding you. Couple that with a new reversal and submission systems and you have a fully loaded WWE game that is clearly trying to recapture greatness.

Easily the most disappointing aspect of WWE 2K15 was its lousy excuse for a MyCareer mode. With a redefined focus on personalities, the new MyCareer seemed to be heading in the right direction. You begin the mode similarly to last year as you create a superstar and enlist at NXT. You then partake in some training matches against Tyler Breeze and Enzo Amore. From there, you are thrust into your first rivalry against the aforementioned Breeze. The new rivalry system is something 2K has been touting, but it leaves a lot to be desired. The biggest drawback is the lack of actual story development. The rivalries feel totally random, and only begin when someone runs out and attacks the other during their entrance. There is no explanation for why, which is the entire crux of what makes rivalries entertaining.

There is also very little build up throughout the conflict. Instead, you just face off against your opposition multiple times as you get closer to your blow-off match at the upcoming PPV. There’s no storytelling, which results in no actual connection to anything happening on-screen. While you don’t necessarily run into the issue you had last year where you were just doing dark matches until you were booked into a storyline, the mode still feels barren. The focus on your character’s personality only comes across in one-to-two-question interviews with a freakishly rendered Renee Young. The answers you give are basic and either boosts your ego, boldness, etc. They’re cookie-cutter answers that never feel meaningful. The MyCareer mode continues to be a solid idea, but the execution feels lifeless.

If you have played a WWE game in the past decade, you know the commentary is consistently horrible. This year, everyone’s favorite former champion JBL joined Michael Cole and Jerry Lawler in the recording booth. His inclusion changed nothing, minus putting a hat on the announcer’s table. JBL sounds like he read his lines an hour after downing a bottle of NyQuil. It is truly amazing, and downright frustrating how little effort has been made in attempt to fix the commentary issue in the WWE games.

When it comes to the action in-ring, your characters still lumber around like they just got out of bed. The pace of the matches feels much slower than it should be, especially when you are playing with quick-feet performers like Sami Zayn, Kalisto, and Neville.  That pace is further slowed down by the atrocious new submission system, which has you enter a mini-game where a circle appears, inside of which you and your opponent get your own respective notches. You must then rotate your piece of the circle and chase your opponent, and if you make them overlap for an extended amount of time, the person taking the submission hold will tap out. I get that this mini-game is supposed to resemble the actual struggle of a submission move, with both wrestlers squirming and jostling for position, but its integration leaves a lot to be desired. It feels way too difficult to get your opponent to tap, and mastering getting out of submission holds is simple to the point where escaping Bret Hart’s sharpshooter for the fourth time in a match is trivial.

Apart from the submission feature, Visual Concepts and Yuke’s have introduced a new reversal system as well. In the past, you would run into situations where players had mastered the reversal system, which would result in matches that have every single move you perform getting reversed. This is one of the main reasons why playing head-to-head matches with actual people has never been enjoyable. This go-around, you get five reversal notches on your character’s HUD. Every move you reverse knocks a peg off, with some larger moves knocking off two or three. As time goes by, each notch will refill, but they do so slowly.

This brings about a great chess match in your head of deciding when it is best to use your reversals. Maybe you want to save them in hopes of countering your opponent’s finisher, or perhaps you are getting your ass beat and you just need something to swap momentum in your favor. This new feature makes back-and-forth gameplay actually happen, as there will be times where you are getting hammered because you used all your reversals too early, so you must take the pain and hope you can worm your way out eventually. While the submission addition is endlessly frustrating, the new reversal system is brilliant and will help the gameplay tremendously as the franchise goes forward.

Arguably the biggest bullet point in WWE 2K16 has been its latest WWE Showcase that tells the story of Stone Cold Steve Austin’s career. As most people know, Austin is one of the strongest personalities to ever set foot in a wrestling ring so it only makes since to make him the face of your game. The mode starts with Austin’s famous “Austin 3:16” promo at King of the Ring 1996. The same basic concept of WWE Showcase modes previous to this year continue to dominate the gameplay. You progress from match to match, completing objectives and trying to recreate all of the major moments of Steve Austin’s career. In between matches, you get expertly crafted video packages that summarize each rivalry you are about to take part in.

While his work in WWE/WWF is the main focus, you can also get some bonus side-matches with the likes of Ricky the Dragon Steamboat (WCW) and Mikey Whipwreck (ECW). The most interesting part of this is seeing Austin before he was Stone Cold, as he rocks his ‘Stunning’ Steve Austin gimmick against Steamboat. He would come out to the ring as a high-class, over-privileged pretty boy with a very different offensive style. Unfortunately, actually playing the matches can become a huge pain in the ass due to the slow pacing, but the mode itself encapsulates Stone Cold’s career very well. If you enjoyed any late 90’s wrestling, Stone Cold’s Showcase will act as a great trip down memory lane as you progress through all of The Rattlesnake’s career highpoints.

The Showcase also highlights another improved aspect of WWE 2K16: the presentation. In matches set in the 90’s, you get a great classic filter over the action that helps set the scene. But the presentation shines throughout the game, not just in the Showcase. While they are still slow, animations do feel tighter, and much less awkward than they have in years past. For years, there have been rough edges presented by the physics system in the WWE games, and that finally seems to be getting ironed out. It is far from perfect, as you will occasionally see someone’s limbs get stuck on a rope, but it is most certainly improving.

Since WWE 2K16’s announcement, 2K has been pushing forward the fact that it features the largest roster in franchise history. That is most certainly the case as you have over 120+ professional wrestlers at your disposal. The options for who you want to take into matches can range from popular NXT talents like Hideo Itami and Baron Corbin, to mid-card darlings from years past like Savio Vega. The amount of people in the game is fantastic, but there are still notable names missing such as Sasha Banks and the current WWE Divas Champion Charlotte.  But at the end of the day, I can assign every title in the company to D’Lo Brown, so I’m happy.

The WWE video games were a bad installment away from becoming a laughing stock. Thankfully, WWE 2K16 introduced a strong new feature, as well as one of the best Showcase modes the franchise has ever seen. The MyCareer mode still needs a lot of work, but the basic premise is still one that can succeed. With the largest cast of wrestlers the franchise has ever seen, 2K and Yukes have done a solid job righting the WWE 2K ship. That being said, there is still a lot of work to be done.