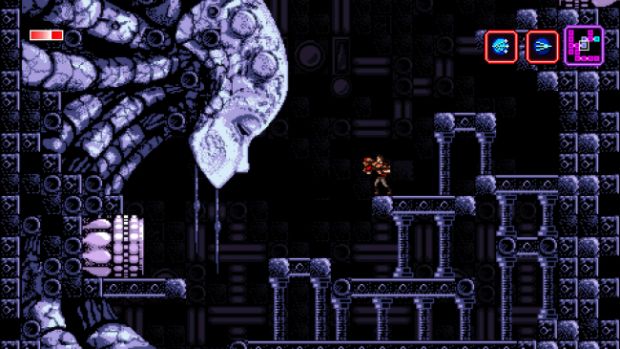 Axiom Verge, like a lot of retro-style indie games, wears its inspirations on its sleeve. Both the visuals and the core run-and-gun combat are incredibly reminiscent of the Metroid franchise, particularly the original 2D titles. However, as you journey more into Axiom Verge’s complex plot and gain more abilities, a sort of shift occurs. Despite its similarities to previous titles, Axiom Verge never uses nostalgia as a crutch; instead, it deliberately sets itself apart from them to create its own unique identity.
The story of Axiom Verge, despite a simple, almost cliched start, is fairly complex for a game of its genre. You play as Trace, a brilliant scientist who gets caught in an unfortunate lab accident and transported to an alternate dimension. From this relatively standard beginning, the plot begins to tangle as Trace learns more about the strange nature of this world. Despite having too much text to read through in the late game, the narrative is supported by many fine details that make the game wonderfully atmospheric. The pixel art is incredibly detailed, and the backgrounds and enemies are at times reminiscent of the body horror of H.R. Giger. The sound design is also great as well, perfectly fitting the eerie caves that you’ll find yourself trekking through.

Also adding to the atmosphere of the game is the progression of Trace as a character. At the start of the game, he’s scared, squishy, and reacts to the developments of the plot exactly the way a random Joe transported to another dimension full of monsters would – badass intergalactic bounty hunter he is not. There’s a section early on where Trace has to venture into an abandoned lab full of corpses and mutated zombies, and it manages to be surprisingly scary in spite of the art style due to the fact that you have no armor and a fairly weak gun you’re just figuring out how to use.

Because Trace starts off as such a wimp, the game’s beginning has a feeling of vulnerability not common in most Metroidvania games, at least until Trace begins gaining new technology and weaponry. While gaining new powers like this is nothing new for the genre, it’s nice to see it worked into the game’s story in such a way. There are a lot of interesting powers as well, and most of them feel unique to the game. For example, you have a small spider drone that can scout ahead and crawl into tight spaces, a glitch gun that can transform items into platforms, and other neat gadgets to play around with.

The running, gunning, and platforming that make up Axiom Verge’s gameplay are tightly designed and control very smoothly. A series of tiny control changes, such as a button that you can press to look in place while you aim, are invaluable for the tough-as-nails boss fights. The Wii U gamepad also gets in on the action, and is fairly useful as both a display for the game’s map and a way to switch weapons without pausing the game.

Speaking of weapons, they’re all very well designed and implemented. While the standard Metroid practice of using them to gain access to locked off areas is in play, none of the weapons feel like they only exist as complicated door keys. Each has some use in combat, though in the late game certain weapons definitely become more useful than others.

Axiom Verge has a lot of extra secrets and neat new ideas as well. For example, one of the threats facing the dimension you’ve found yourself in is a sort of corruption that warps the very space around you. In a creative twist, this corruption takes the form of graphical glitches, such as textures randomly swapping, static covering areas of the screen, and sprite flickering. There are entire secret levels that use these effects, and overall it creates a feeling like finding a hidden glitch level like the infamous “Minus World” in Super Mario Bros. It’s a cool addition to the game that serves as a fun reference to gaming history without breaking the fourth wall too hard.

Despite superficial similarities to classic Nintendo games like Super Metroid, Axiom Verge isn’t afraid to bring a lot of new ideas to the table, and is all the better for it.