Simple 2D side-scrollers are a classic, whether they be games like Battletoads, MegaMan, Super Mario, etc. These types of games focus on a combination of platforming, attacking, and sometimes pattern recognition. Clash Force aims to recreate the feeling of those classic 2D side-scrollers, both in gameplay and aesthetics. Although the idea sounds nice, the execution could make or break it. That being said, Clash Force falls somewhere in the middle.

Clash Force follows a group of three animal soldiers who make up the group Clash Force. The evil Crackman is up to no good and it’s up to you to fight through over 20 levels on your way to stopping him. You can choose to play as Voom, Scorpido, and Echid, but sadly they don’t have any differences other than appearances. With no special abilities differentiating them, there’s no real reason to go back through the game as any of the others. I chose to play as Echid and didn’t play as the others beyond testing since they all played the same. Each soldier looks fine, so I’d say play as whoever looks the most appealing to you. 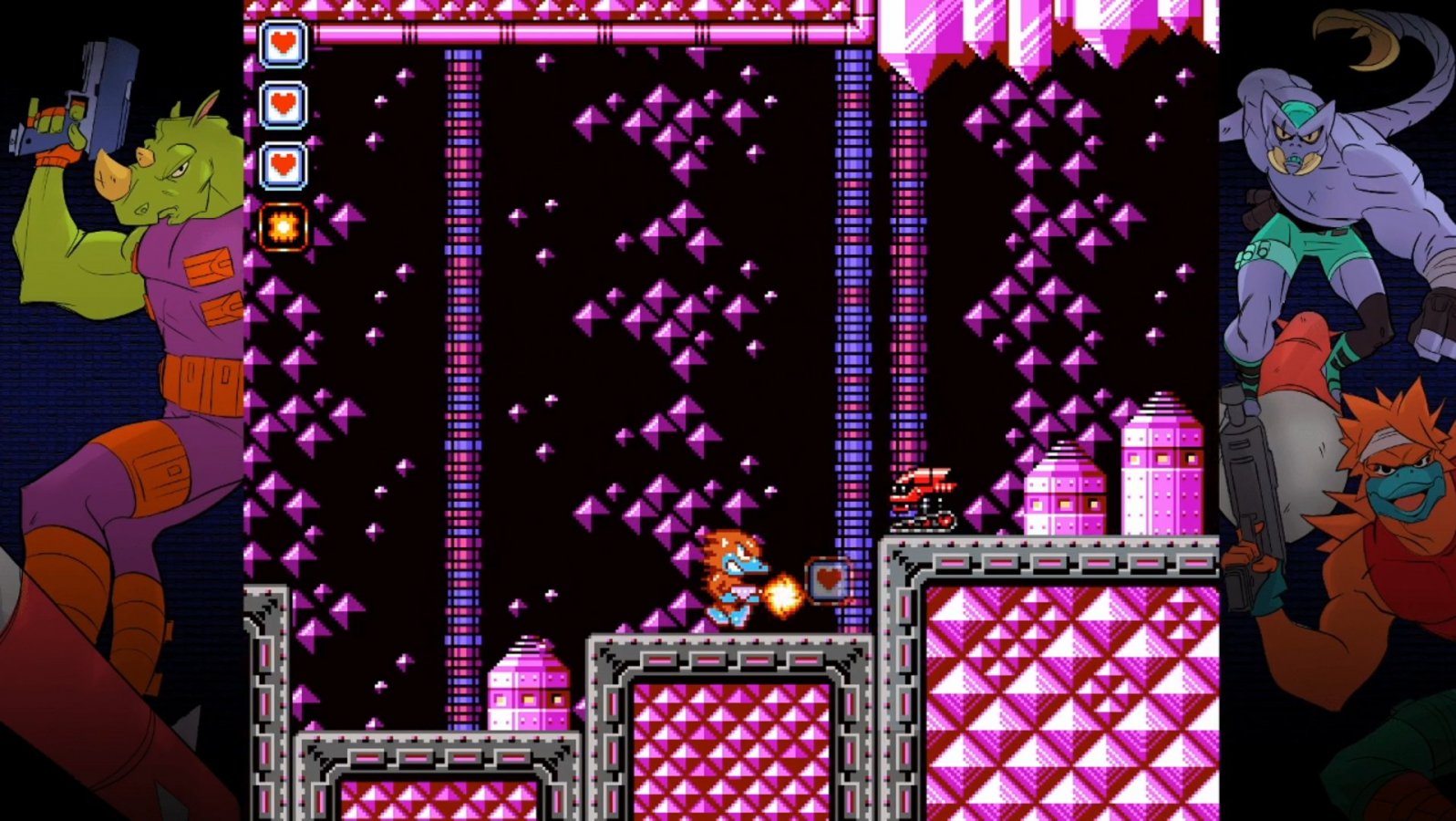 They all have the basic commands of running, jumping, and shooting. You can jump higher by holding down the jump button as well. You’ll always have your starting gun, which is reliable, but not the best. You’ll want to pick up upgrades during the playthrough in order to improve its power and speed. You can only have one upgrade equipped at a time, and picking up a new upgrade automatically replaces the old one. These include a shotgun-like blast that shoots multiple fireballs in a spread shot, a shot that goes straight ahead and twirls like a helix, a powerful double laser beam, and a rapid fire pea-shooter shot. There aren’t many variations to your gun, but they get the job done. Any upgrade is better than the starting firing pattern, so you’ll want to keep one equipped. Speaking of keeping them equipped, if you take any damage, your currently equipped upgrade gets removed. This can hurt a lot because one wrong move forces you back into using your generic shot.

You start each level with three hearts and whatever equipped upgrade you held during the last level. If you lose all three hearts, you start the stage over again. Thankfully, you can find heart containers to heal with, but they aren’t that frequent. Even so, you have an unlimited number of lives, so you’ll never have to start the game from the beginning; you’ll only have to start the stage over again. That aspect is pretty nice, but it doesn’t alleviate the frustration of dying a lot. 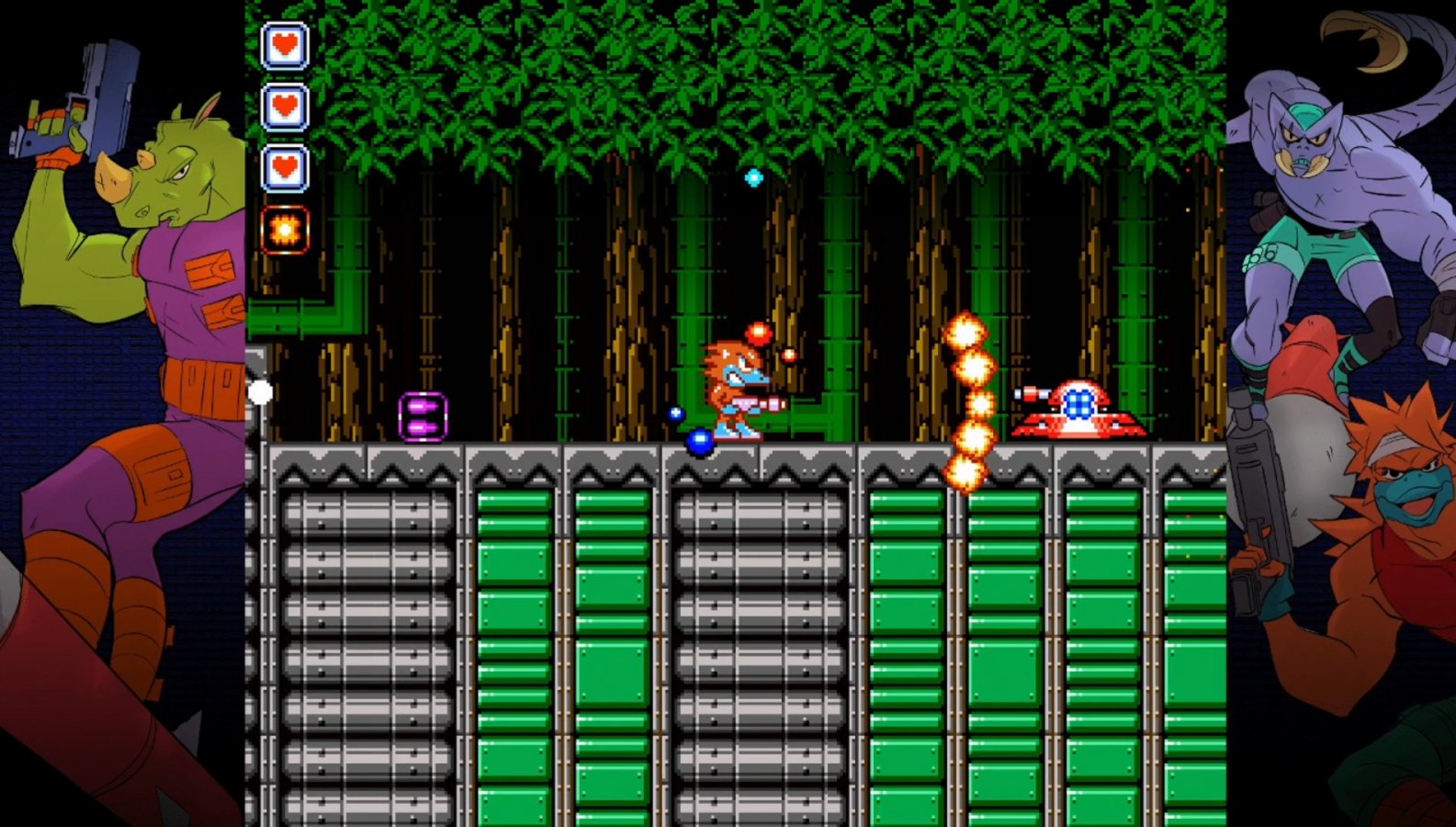 In early stages, Clash Force provides a decent enough challenge without being too annoying, but that changes down the line. The last few stages ramps the difficulty up for no apparent reason. Yes, the final stages of a game should be tougher, but it felt like there was no gradual buildup to it; it just happened. For example, Desert Base and Missile Ride are the two worst offenders. Desert Base features a new type of enemy that explodes and launches projectiles upon its death, which shouldn’t be a problem. That is, until you realize that you can’t kill them with your gun; they can only die on their own. This means you’re forced to get close enough to trigger them and then dodge. Again, not too annoying, but this stage adds in a long section where you have to avoid turrets that fire lasers from the ceiling along with these exploding enemies blocking your path. It’s hard to time these multiple dangers to avoid getting hit, so you’re more than likely going to take some damage. It can be done safely, but it’s hard. Missile Ride sees you jumping from missile to missile, avoiding oncoming obstacles and gunfire. Not only do you have no real indication of what’s coming at you, but standing on the missiles causes them to sink on-screen. This means you have to move quickly, and most likely rush into danger. This stage took me at least a dozen tries, and man was it frustrating. I almost quit playing because of this stage, but after some dumb luck, I made it through.

Speaking of frustrating, one last thing I need to discuss: the bosses. Usually, bosses have some sort of pattern that you’re supposed to learn and use to your advantage, but that’s not the case here. Sure, some bosses have a pattern of sorts, but there’s always something random about them in the end. For example, the final boss shoots missiles, then fires two energy balls that explode into smaller balls, and finally fires one shot from each foot. The missiles always fall from the sky in random locations, and the energy balls always split and launch in random directions as well. This means you have to get lucky with twitchy reflexes and try not to get hit. Oh, and there’s no healing during boss fights, so three hits and you’re out. Not only that, but if you fail a boss fight, you start that fight over with only your starting gun, which makes it even harder. As an example of a boss with no pattern, there’s a boss that moves straight up and down, firing occasionally. He fires at random moments, and after he’s taken enough damage, he fires even faster, making his random shots that much more dangerous. 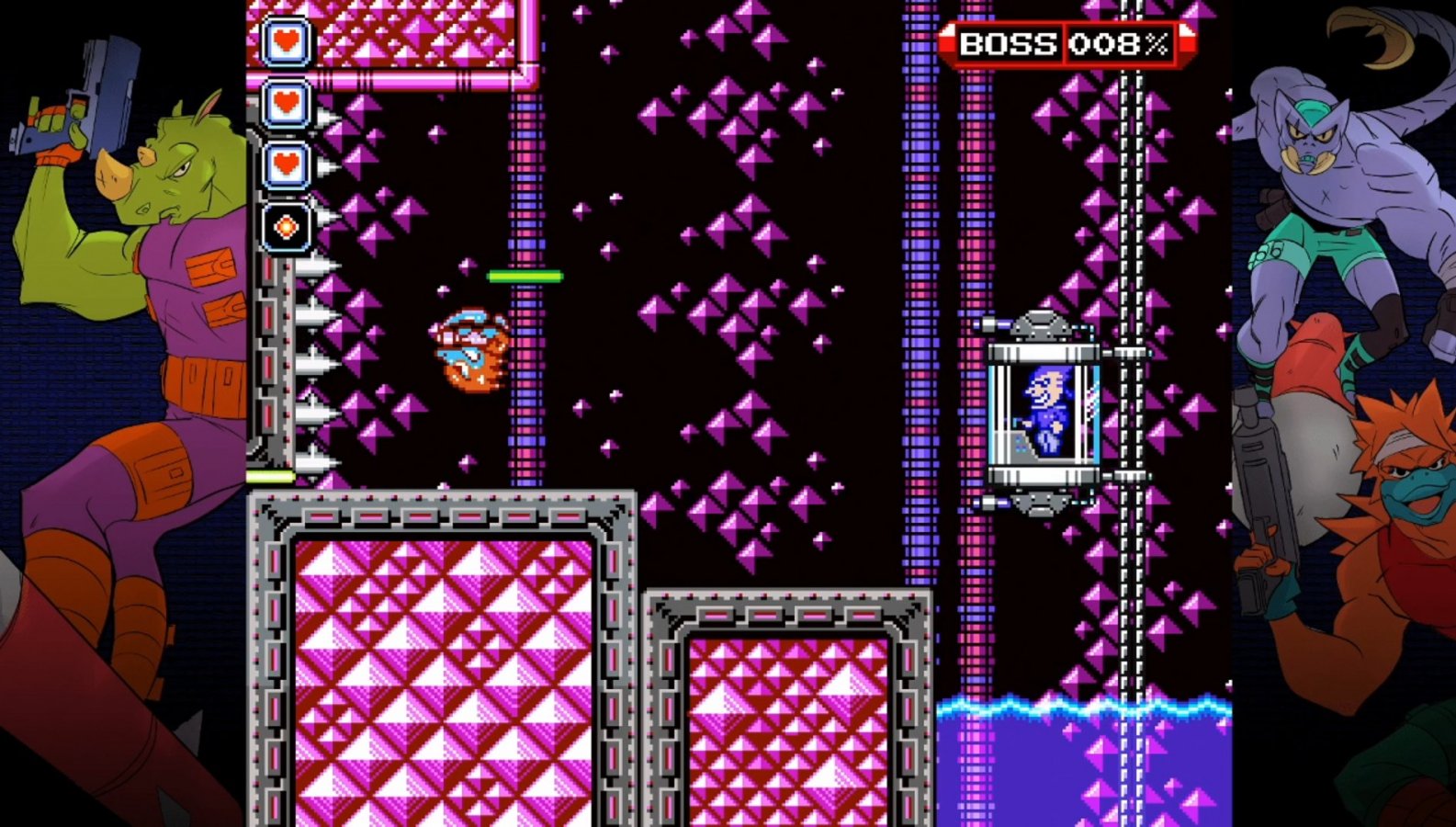 Clash Force only took me about 1 1/2 hours to complete it, and that’s including having to attempt several stages and boss fights multiple times. It’s not a long game, but with how frustrating it got near the end, that might be a good thing. The biggest shame is that the majority of the game was nice, especially the first half. If some of the bosses were tweaked a bit, and the last few levels were toned down a bit, then I’d feel better about recommending Clash Force. It captures that old-school 2D side-scroller feel well, from the 8-bit graphics to the nostalgic soundtrack to the decent platforming challenges. It may not be the best homage, but it tried its best. For that, I’d say it deserves a bit of recognition.

Clash Force is a nice attempt at recreating the classic 2D side-scroller. The 8-bit graphics and game design feel right, but the final stages of the game take a dramatic difficulty spike. If those were tweaked, the game would be less frustrating and more enjoyable.

Codi loves to play video games and watch movies. He will watch almost any kind of movie just to experience them. His ideas take inspiration from the shows and movies he watches, and games he plays. He also loves a good pun.
Related Articles: Clash Force
Share
Tweet
Share
Submit