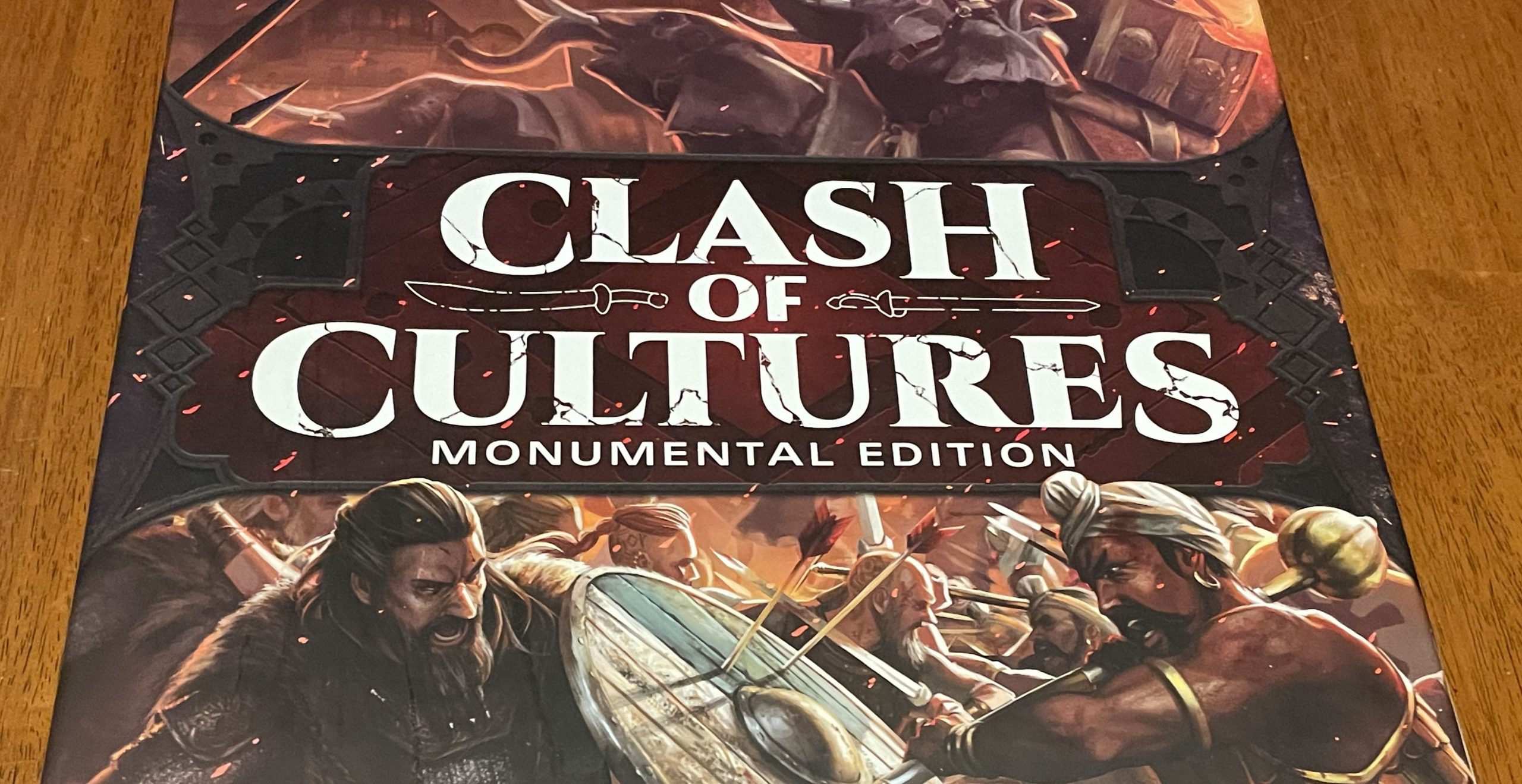 When Clash of Cultures was originally released in 2012, it became a solid success. However, Z-Man decided to not publish it after two print runs, making it expensive on the second-hand market. The expansion for it had an even smaller print run, making it even more difficult to get. WizKids has taken up the mantle several years later and published Clash of Cultures: Monumental Edition, but is it worth the wait and the price tag?

Clash of Cultures is a civilization game where each player starts with a single city and aims to increase their influence through culture, wealth, and expansion. The map starts out with each player’s starting city on an edge of the map with several four-hex region tiles with their terrain face down between the other players. Each player gets a board for tracking resources and advancements of their civilization. As you might expect, this gives Clash of Cultures a large footprint on the table, but that’s not unexpected for a game like this. The game ends after six ages of three rounds. Victory points are gained from settlements, buildings, advances, objectives, and other means. Victory points get counted at the end of the game, and the player with the most wins.

Each round players choose three actions to perform. Six different actions are available to choose from and each can be used multiple times. Advances are grouped in four similar traits and bought to gain new abilities. The advance at the top of the group must be bought before any of the three below. When you purchase an advance you gain a culture or mood token. After buying every third advance an event card gets flipped and needs to be resolved. Events include gaining money or other resources, spawning or moving barbarians or pirates, and recruiting settlers.

Activating a city lets you recruit units, collect resources, and construct buildings. Buying buildings increases the size of your city, but that size can’t increase it to a size larger than the number of cities you currently have, so you have to have at least two settlements before you can build any buildings. Buildings also have advance prerequisites before they can be built onto your cities. You can collect resources equal to the size of your city, but happy cities gain an additional resource, while angry cities only produce one resource. Settlers, infantry, and ships can be recruited as long as you have the necessary resources, and the number of units you can recruit is dependent on the size of your city, with happy cities able to recruit an additional unit and angry cities only able to recruit a single unit.

A city can be founded at a location with one of your settlers. Certain conditions need to be met, like being on a land space that isn’t barren, doesn’t already have a city built on it, and doesn’t have any enemy units on it.

A land move action allows three units or groups of units to be moved to a single space. Ships can be moved single water hexes or from one body of water to another with the Navigation advance. Battles can ensue if enemy units are in the same location. 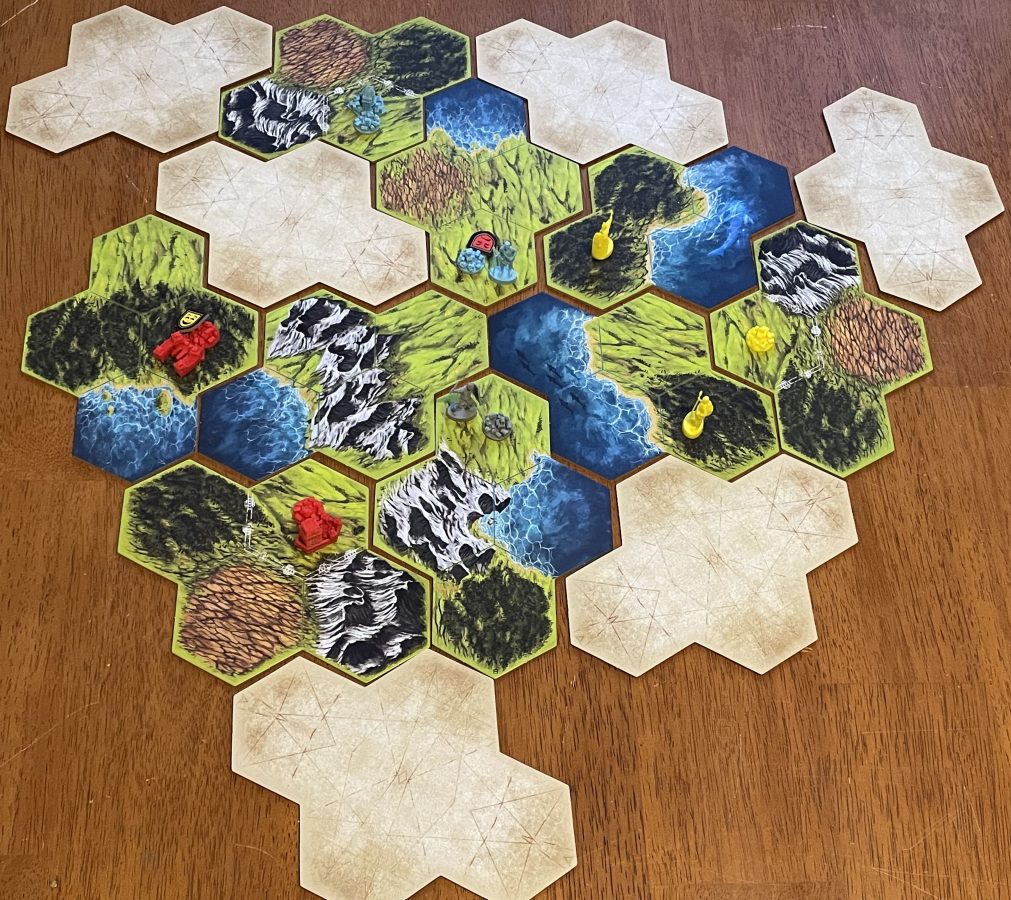 Influencing culture is one of the more unique aspects of Clash of Cultures. If an opponent has a city with buildings in the range of the size of your city, you can attempt to influence their city by rolling a five or six on the custom twelve-sided dice. Culture tokens can be used to increase the range or the amount of the die roll. If the player is successful, one of the enemy city’s buildings is replaced by the same building of the attacking city. The city’s owner still has the abilities of that building, but the victory points at the end of the game will go to the player who influenced the city’s culture. Influencing culture is the only action that can be successfully performed once.

The status phase occurs at the end of each age. First, any complete objective cards are placed in front of each player. If a player doesn’t have any cities or it is the end of the sixth age, the game ends at this point. If the game continues, each player gains a free advance which resolves just like buying an advance as an action. Then each player gets an action and objective card. Players can then raize a size one city and gain a gold resource. This could be done to make it easier to expand cities or because it is under threat. If you have a government type advance, you can change the government type during this phase. Finally, the player with the highest number of culture and mood tokens combined gets to be the first player for the next age.

Specific advances will gain you a Wonder card. These represent the different wonders of the world. These can be built as a part of one of your cities and will give you extra victory points, as well as give you different advantages during the game.

As you might expect, the game starts without much interaction from the other players, with everyone concentrating on building their civilization and figuring out their strategy and the advances to concentrate on. New areas become discovered with new resources. Players recruit settlers and use them to found and increase the size of their cities. Eventually, it will be impossible to not affect each other and conflict ensues. Infantry built battle with other infantry and barbarians event cards spawn to the map. Later turns get more involved due to the number of advantages due to advances, the resources being gathered, and the battles to take over other cities.

I found that it is possible to have conflicts amongst other players giving one player the ability to sneak in a victory. A player who had difficult times with attacks or resources will have trouble expanding their civilization more, so the mercy rule of stopping the game when a player doesn’t have any more cities is appreciated, though I don’t see it being used often. 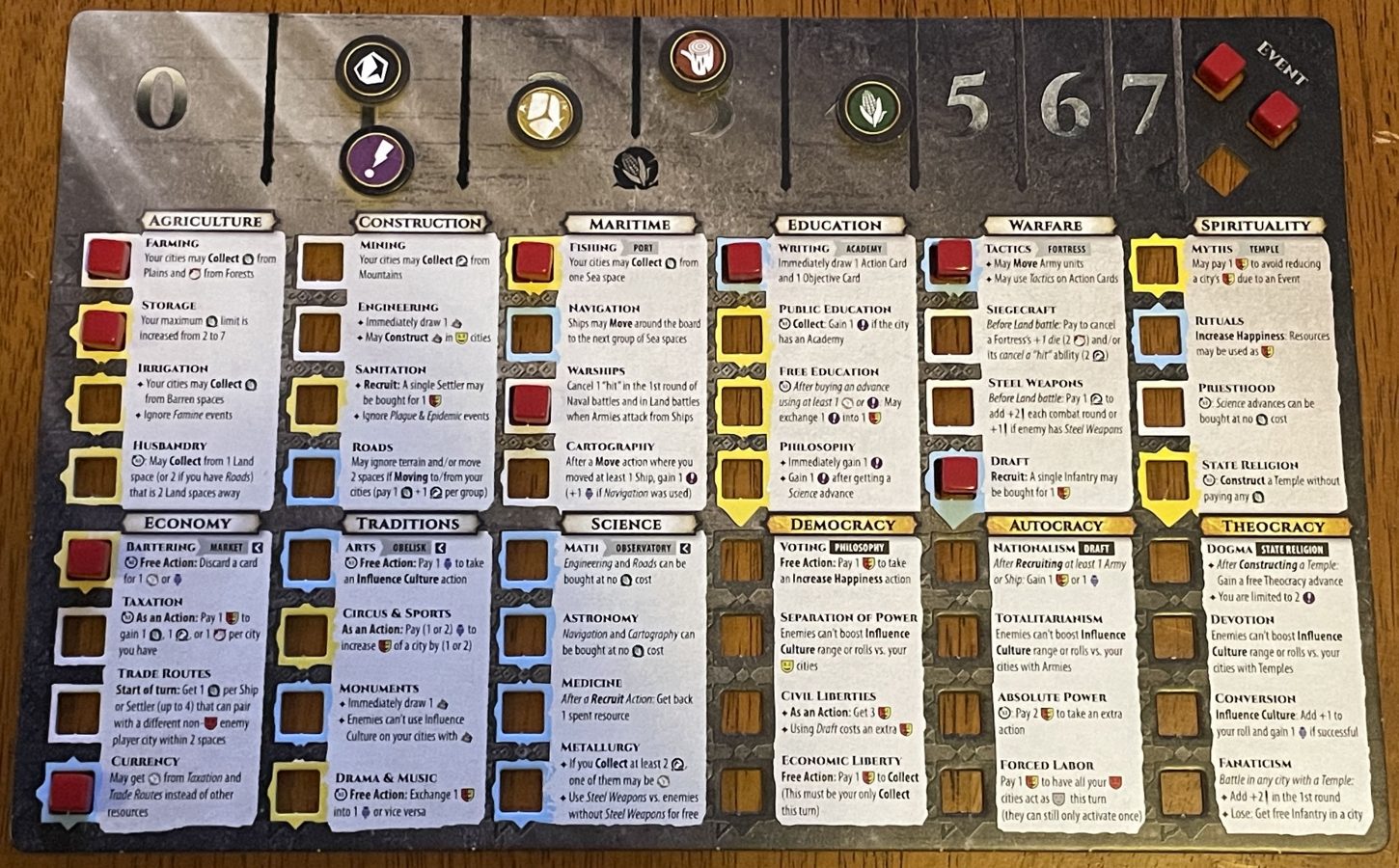 After playing, all of us felt like we had an engaging game with a little bit of brain burn, but it was a satisfying experience. We all felt like we would have done things a bit differently and wanted to explore the game more. The game took a little longer than we had originally expected but felt that subsequent plays went smoother and quicker. While we started with the basic game, there was still enough depth that we had difficult decisions to make each round.

The rulebook has the difficult duty to explain all of the aspects of the game. It does a good job of explaining the different phases of the game and provides ample examples for gameplay situations that will occur during the game. While we did miss a couple of items during our initial playthrough, they were minor and didn’t affect our session much. Still, even with the amount of concepts in the game, there’s plenty of flipping through the rulebook to get clarification. Every player does get a player aid, which is brief enough to show all the different concepts of the game but thorough enough to give an explanation of them. It’s also double-sided with one side for the original game and the other side including the Civilizations expansion. Complex games like this would do well to include player aids like this instead of just putting it on the back of the rulebook.

This Monumental Edition contains the Civilizations expansion giving players asymmetrical starting factions with unique starting regions, civilizations, and leaders. Additional units and buildings are available for each faction as well, and new events and objectives get added into the mix. The rulebook does a great job of marking which pieces are part of the expansion, as well as mentioning the concepts for these items in areas where they are applicable. The base game still plays well, but those who are familiar with this style of game that wants more meat to chew on will appreciate the additions of the expansion.

The Monumental Edition not only has a crazy amount of plastic figures, the figures included have detailed sculpts. Each of the different types of buildings are easily identifiable, and they form around the circular settlements nicely. You can see and feel your city grow with each building surrounding the settlement. The Wonders all look like you’d expect them to. You can easily tell the difference between a settler and infantry with a quick glance.

Not only are the plastic components well done, but the cardboard pieces are high quality. Each of the region tiles, player boards, and tokens has a noticeable heft to it. The player boards also have cube shaped holes for the different advances. This holds the advance cubes in place should it get bumped. The plastic trays inside the box hold all the cards and other pieces, with the different factions separated by color. This really makes setup a breeze, even if it makes teardown a little more time-consuming.

I had heard about Clash of Cultures and its reputation several years ago. When I heard that Wizkids was creating a version that included the expansion, I was very curious to try it out. While it took a bit longer to get it due to the pandemic, it was worth the wait. You can see the rise and fall of civilizations during the entire game. It’s a great introduction to people who want to get into the civilization genre, but those who want a more involved experience will be able to find it with the Civilizations expansion included.

While not working as a Database Administrator, Keith Schleicher has been associated with Gaming Trend since 2003. While his love of video games started with the Telestar Alpha (a pong console with four different games), he trule started playing video games when he received the ill-fated TI-99/4A. While the Speech Synthesizer seemed to be the height of gaming, eventually a 286 AT computer running at 8/12 Hz and a CGA monitor would be his outlet for a while. Eventually he’d graduate to 386, 486, Pentium, and Athlon systems, building some of those systems while doing some hardware reviews and attending Comdex. With the release of the Dreamcast that started his conversion to the console world. Since then he has acquired an NES, SNES, PS2, PS3, PSP, GBA-SP, DS, Xbox, Xbox 360, Xbox One S, Gamecube, Wii, Switch, and Oculus Quest 2. While not playing video games he enjoys bowling, reading, playing board games, listening to music, and watching movies and TV. He originally hails from Wisconsin but is now living in Michigan with his wife and sons.
Related Articles: Clash of Cultures Monumental Edition, Tabletop
Share
Tweet
Share
Submit