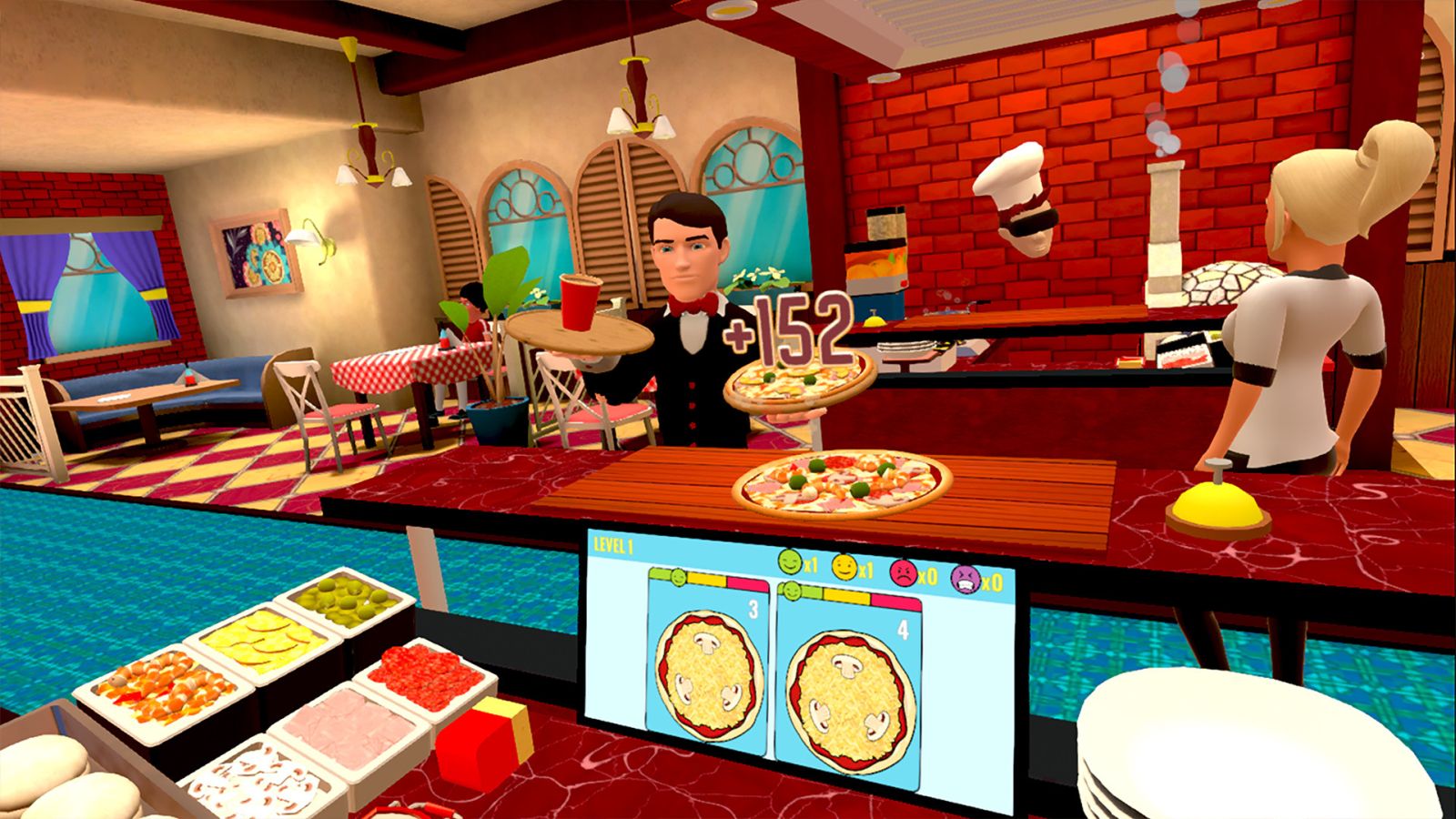 You’ve “got gud” and Fornighted the magical Underground Players in the Warzone , you’ve raced all the Formula Horizon races, and you’ve Called the Duty of all the Battlefield Halos. Sometimes it’s great to slow down a bit and do something completely different. Since the VR industry is fixated on the service industry, it’s time to chop up some veggies, flip some burgers, and make some virtual chow in Clash of Chefs VR. Let’s find out if this is a delicious truffle burger, or just so much boiled tripe.

The premise of the game is similar to Diner Duo, which is high praise indeed — we absolutely love that game. Customers come into your restaurant, a server gathers their order, and then you as the chef are tasked with busting those out as fast as you can. The orders start simple enough…meat on the grill, throw it between a top and bottom bun, ring the bell for pickup, and done. Later, cheese, ketchup, and mustard variants start showing up, and you’ll be adding cucumbers, onions, fries, and drinks, but by then you’ve got the idea. Why I can’t make a deep fried bacon burger is beyond me, but that’s not in the game…yet.

If American fare doesn’t tickle your fancy, rest assured you can also hit an Italian restaurant for pizza with all the toppings, (including spinning the pie dough above your head — make sure you are clear of a ceiling fan!) penne, and rotini, though spaghetti and meatballs are conspicuously absent. Want a real challenge? How about Japanese? Increasingly complex tonkotsu ramen, sushi, and green tea will keep your hands moving. Want to spice things up? Mexican food like nachos, tacos, and burritos are on the menu. There is nothing stopping the team from adding additional restaurants and food types in the future, but unlike some other cooking titles I can think of, everything is ready to go, right out of the box — no additional purchases required.

Knowing that my wife is a Le Cordon Bleu Academy graduate and knows all the things about food, I decided to take Clash of Chefs VR for a spin solo. There are a total of 60 single player levels to tackle, with progressive challenges as you might imagine, as well as three different difficulty levels. The gameplay loop is what you’d expect — your waiter (which you can customize with half a dozen heads, hair styles, eye colors, and skin types) will go take orders, and they’ll appear on a small screen in front of you. Order matters, so assemble things in the correct sequence or the wait staff won’t take it to the customer — it’s their tips, so I understand.

Unlike other cooking games, you can disassemble basic meals like burgers and reassemble them if you got the order wrong. Things like pizza, however, are a lost cause — throw them away (or at the customers) and start again.

Both Laura and I ran into an issue in the Italian kitchen — grating cheese. It’s a little fiddly, and you have to get the cheese fairly close to the grater. On more than one occasion we both clacked our controllers together trying to get the mozzarella on the pie. Sometimes the grater would just kinda…wiggle around, shedding the smallest bit of cheesy goodness. It’s not a showstopper by any means, it’s just a little less refined than its culinary counterparts.

The biggest improvement Clash of Chefs VR brings to the table is online multiplayer. Other cooking games are solo affairs, or a VR/flat screen pairing. Here you can challenge your friends and family in head-to-head five minute battles for culinary supremacy. With all four kitchens available from the get-go, you can sling pies, bust out burritos, grill ground beef, and knock out noodles against your friends on the same platform. While cross-platform play isn’t available (you’d have to use the Oculus on Steam as an example), it works perfectly in practice. That being said, I do wish there were more multiplayer modes like cooperative play or just modifiers to toggle. While throwing burnt pizza at your opponent is fun, being able to more directly sabotage their efforts would be better.

To ensure the game works for chefs of any size, there is a handle to adjust counter type. We did have a bit of trouble getting this to work accurately while seated, but at least height won’t be a challenge.

If you can’t pair up with a friend in real time, you can challenge them asynchronously. Working your best culinary skills you’ll set your score on the leaderboard which can be sent to a friend as a personal challenge. We did run into an odd bug on both headsets where scores kept coming up zero, so there’s work to be done here.

Clash of Chefs VR will set you back $15.99 during the launch window, with the price springing back up to $19.99 post-launch. Honestly, either price seems about right for the gameplay you get. The core gameplay loop may be simple, but what it does, it does well. Fighting with my friends is a blast, and fileting fish with family is just good wholesome fun.

This is an excellent VR title for newcomers and VR veterans alike, with pickup and play action, and a well-paced challenge throughout. Hopefully we’ll see additional content expansion post launch to help keep our food fight fresh, but Clash of Chefs VR is fun for the whole foodie family.

Ron Burke is the Editor in Chief for Gaming Trend. Currently living in Fort Worth, Texas, Ron is an old-school gamer who enjoys CRPGs, action/adventure, platformers, music games, and has recently gotten into tabletop gaming. Ron is also a fourth degree black belt, with a Master's rank in Matsumura Seito Shōrin-ryū, Moo Duk Kwan Tang Soo Do, Universal Tang Soo Do Alliance, and International Tang Soo Do Federation. He also holds ranks in several other styles in his search to be a well-rounded fighter. Ron has been married to Gaming Trend Editor, Laura Burke, for 21 years. They have three dogs - Pazuzu (Irish Terrier), Atë, and Calliope (both Australian Kelpie/Pit Bull mixes).
Related Articles: Clash of Chefs VR, VR
Share
Tweet
Share
Submit