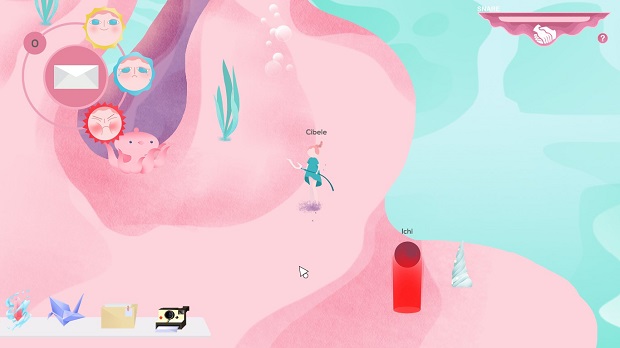 Cibele is the fictionalized retelling of a true story about 19-year-old Nina Freeman who moves from her home state of Massachusetts to New York for college. Her interests include photography, watching anime, and writing poetry, and her personality is as colorful as her dyed pink hair. She has big plans for her life, such as studying theatre in college and traveling the world.

Nina is also an avid gamer. In 2003, she and her friends purchased Final Fantasy X-2 right when it came out and devoted days to it. Then in 2006, she discovered the online video game Valtameri. Through Valtameri, she meets and befriends a guy with the username Ichi.

Cibele is about how their relationship develops and changes throughout her freshman year of college. It is told through interaction with Nina’s computer, playing Valtameri, and a few intermittent live action cutscenes.

Each day starts with Nina getting onto her computer. You can read her messages, view any new photo posts, and even click around through her poetry or blog drafts. Then when you’re ready, you launch Valtameri and the portion of that day’s story begins, told through a voice chat between Nina and Ichi.

This is one web page Nina designed for her site listing her favorite animes.

I think that narrative building through peeking into someone’s computer is a neat concept. The sections where you are free to browse are one of my favorite things about this game. They let you set the pace, and as you explore Nina’s file folders and computer programs, you’re given a sense of what’s going on in her life and what’s on her mind at the time. It feels very intimate.

In the beginning, Nina’s folders are full of plans for her personal website and photos of her friends. During this time, she and Ichi address each other by their Valtameri usernames. Then as they grow closer, they start using their real names in conversation, and you learn that his name is Blake.

Blake calls her cute based on the photo she posted of herself on the game forum, and she responds that he might feel differently if she took another. He tells her she’d look good in anything, so after she logs out of the game, she strips down to her underwear and sets up her camera.

There are a few levels you play on Valtameri, all of which are very pretty.

After a couple of months, the files on her computer change. Now she has bookmarks for a lingerie store, and her web history suggests she’s been researching prices for plane tickets to Los Angeles, where Blake lives. Her folders contain a lot of suggestive photos she’s taken for him. Chat conversations reveal that she’s been passing up social invites and skipping classes for him, and she even puts down her own friends when talking to him because she wants to appear as cool and nonchalant as he believes she is.

From your outsider’s perspective, you can see that this has turned into an unhealthy obsession. Almost from the beginning, you feel like you know how this story’s going to end. Some of their Valtameri friends call him an arrogant jerk, which is evident from how often he calls the game’s players idiots and says that few people are worth knowing.

Blake spends a lot of time complimenting Nina’s looks. This seems to be his primary interest, more than her intelligence or her skill at video games. He can’t really decide what he wants out of his acquaintance with her; sometimes he’s affectionate, and others he says a relationship would be too “uncomfortable” for someone as antisocial as he is.

After a tumultuous saga, which I won’t spoil just in case you want to play it, Cibele comes to a somewhat abrupt end and the credits roll. As I sat in reflection, trying to decide how I felt about it, I concluded that I wasn’t exactly impressed.

The cutscenes give you a glimpse of the girl behind the computer, along with her bedroom and a couple other areas around where she lives.

First of all, it isn’t super polished. Basically all of the cutscenes lag at the end before the next part of the game loads. Sometimes files on the computer don’t open when you click on them, so it makes you feel like you’re missing a piece of the story. Hitting “reply” on in-game chat messages sometimes continues the conversation immediately, sometimes leads to replies later, and sometimes does nothing at all. That makes me wonder: were those conversations supposed to continue and just aren’t loading properly, or were they purposely brief and vaguely uninformative?

Second, the game is very short. Even if you take your time exploring files and replying to every message you can, it’s less than 2 hours long. It definitely has a predetermined narrative; navigating the computer and playing in the world of Valtameri only give the illusion of choice.

Also, it just didn’t grab me. Now normally I like story-driven games. To The Moon really enchanted me. Though The Beginner’s Guide gave me complicated feelings, it did hold my attention. Even Dear Esther, which isn’t the most phenomenal game out there, was enjoyable to play through. Cibele just feels too predictable. The personal details you find buried in Nina’s files offer the most flavor; the rest is pretty bland.

I will admit, this game did remind me somewhat of myself. Though I’ve never met any of my romantic interests through an online video game, gaming has played a big role in several of my relationships, from couch co-op to scheduling time to game and voice chat together during long distance relationships.

It’s made clear in the game promotion that Cibele is autobiographical. I’m sure it must have been a cathartic experience to create it, like writing in a journal or composing a poem. Though some players will be able to relate to the ideas and emotions evoked, it isn’t that compelling. The most creative thing about its telling is the medium of Nina’s computer.

Cibele has some things going for it, such as a narrative structure based on interaction with the main character’s computer. It’s a fairly predictable story told in a new way. Some parts of it were intriguing, but overall it didn’t really wow me.

Sarah Marchant is an office admin for a nerdy t-shirt company. She has a soft spot for indie games, a passion for story-driven titles, and a weakness for cooking games and anything with zombies.
Related Articles: Cibele
Share
Tweet
Share
Submit