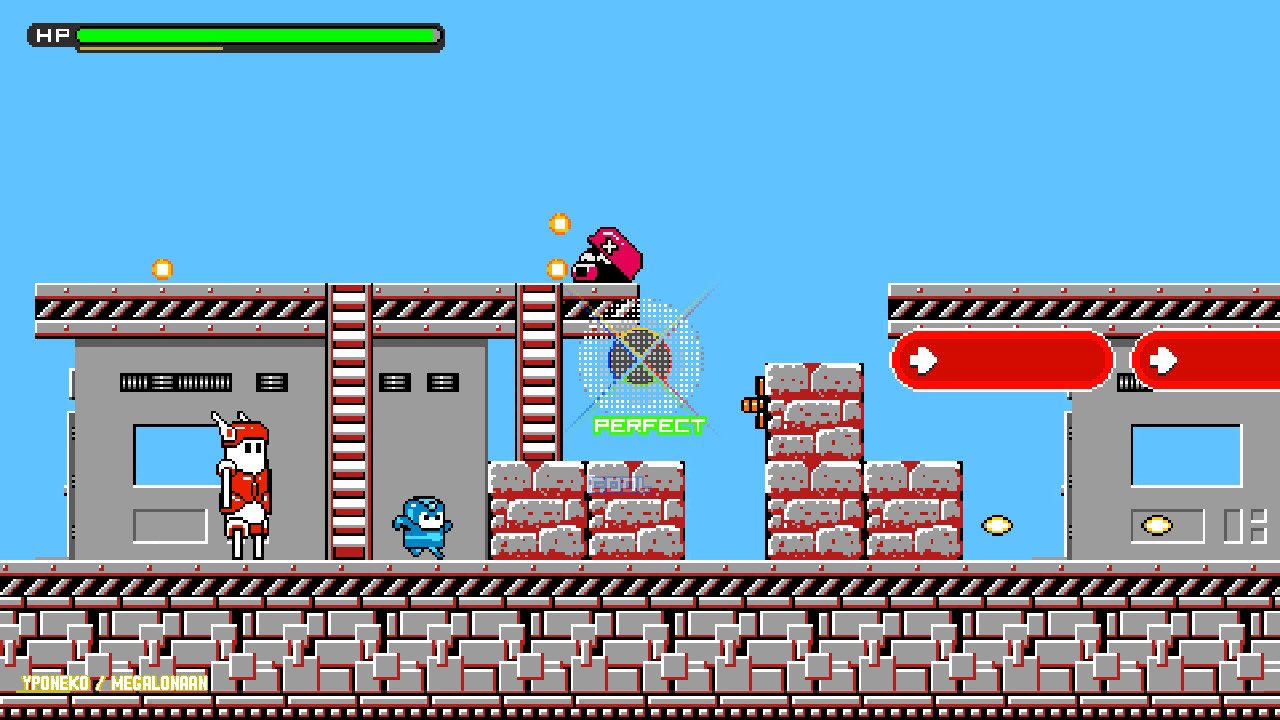 The homage has been a tried-but-true convention with video games as of recently; it seems that a lot of indie games on the Switch have used a pixel art aesthetic mixed with gameplay of varying degrees and genres. La Moutarde has taken this approach with its newest game, Old School Musical, which aims to be a love letter to chiptune enthusiasts and nostalgic gamers who like lighthearted parodies of their favorite games. While there are a few things holding it back, it’s still a nice little tribute to the 8-bit games of old.

Old School Musical stars Tib and Rob, two brothers who have only known themselves and their comically abusive mother, aptly named Mom. After Mom is mysteriously absent, the duo realize that their world is falling apart thanks to a glitch in the system; barely escaping with their lives, the two travel across different game worlds in order to find their mother as well as the origin of the virus that threatens to destroy the gaming universe.

Gameplay is divided into different stages, with a hub world in space that connects everything together. Each stage is a track from a chiptune composer and pits the characters in wacky scenarios that reference old video game franchises, from Contra to Mega Man to Final Fantasy. They’re distinct enough that the homages don’t delve into copyright infringement, but fans will definitely appreciate the little bits of nostalgia in each of the stages.

It’s a shame that aside from one huge exception, a lot of these titles aren’t used too much; usually it’s two stages per setting, which can be a bit underdeveloped. In fact, there’s even a hub world near the end of the game that’s underused, but was a bit of a breather. Due to the plot of Old School Musical, most characters are limited to one world, but there are some standouts. The mean biker in the OutRun-esque world that ends up complimenting the two when the world is corrupted, or the Link-lookalike that is captured by chickens for ruining said chickens’ world comes to mind. I did enjoy the goofiness of it all, and the plot is unique for a music game like this.

Gameplay is reminiscent to something like Hatsune Miku: Project Diva Mirai, where notes will come from four directions and you’ll have to hit them in the center using the d-pad, face, and L/R buttons; unfortunately, the analog sticks are unused (and this will be important to note later). Like most music games, this system is simple but can get overwhelming pretty quickly (though music game veterans can skip to difficult mode for an added challenge). It’s a mechanic that works very well, though I do recommend that you turn on the rumble to at least a weak setting. It seems that sometimes the button presses feel a little unnatural and I needed some tactile feedback to get back in the groove of things. This can get a little stressful in later stages, as the convention of missing a beat and losing successive notes can whittle your HP down to zero, and the only way to recover is by hitting more beats correctly in succession.

While it’s pretty odd to talk about the soundtrack this late in a review, it’s a pretty eclectic mix of chiptune artists and genres. The only artist with which I was familiar before playing this game was Hello World, but the other artists were pretty great as well, from Dubmood to Le Plancton. Most of the story tracks try to emulate the style of the game that’s currently getting parodied by the duo, but there are also some hard-rocking tracks and styles that are more in tune with the “fakebit” scene (in essence, it’s chiptune without being limited to actual NES-esque limitations). While some songs might not appeal to every person, almost all are a blast to play and contribute to the gameplay system as a whole. It’s a fun soundtrack that puts the “musical” in Old School Musical.

While playing a stage, visual elements will play in the background, and they are pretty vibrant and colorful. The visuals are crisp pixel art, and there were times when I wanted to play the parody version of the game that was playing in the background; they were that appealing. The performance of the game is smooth as well, which is crucial for a game in this genre. If you’re playing on a television, you can adjust visual lag that occurs on HDTVs, which is a nice touch; however, I much preferred playing in portable mode, since inputs and feedback were instant and lag-free. Each stage is unique in its presentation, and while I did think most of the settings were underused, the runtime is short and sweet (clocking in at around two hours). There are free play options, so you can replay your favorite tracks from another menu. All in all, it’s a great time for those looking for a fun little music game.

After completing the main storyline, you’ll unlock the Chicken Republic mode; this is an expanded version of the chicken quest arc from the main storyline, and I have mixed emotions about it. Narratively, it bridges the gap between a couple of the main story stages, but in reality, it’s a mode that’s almost three times as long as the main story. This means that you’ll easily spend most of your time here. This normally isn’t too bad, but there isn’t that much visual variety as the rest of the game since you’re in a Final Fantasy themed title for the whole mode. The backgrounds have Tib and Rob fighting endless amounts of chickens while walking in different locations ala Theatrhythm Final Fantasy, minus the RPG mechanics.

I don’t complain about extra content, per se, but this mode is the majority of the game, and it’s underwhelming compared to the rest of the game. Throughout the different stages, you’ll have to deal with visual filters that will distract your field of view, such as having a Game Boy-like pallette or having a shirtless guy dancing obscuring your beats. In theory, it does create a challenging experience, but more often than not, it becomes fake difficulty that frustrates more than it entertains. The fact that there’s no way Chicken Republic contributes to the plot with cutscenes or dialogue makes this feel rather empty. It’s even more egregious when more than half of the soundtrack can only be experienced in this mode (though songs from the main story do pop up here too).

Finally, the multiplayer mode felt tacked on. While you can play with up to four players, you’ll basically experience the main mode but with the added difficulty of getting the lowest judgement of all the players; you got a perfect but your rhythmically-challenged friend missed? Too bad, HP penalty for all of you! Compound this with the problem that you can only use face buttons to register beats (which makes playing all but the easiest songs impossible) means that single Joy-Con play doesn’t work, so get ready to shell out some cash for extra controllers. Better yet, just skip this multiplayer mode entirely.

Elisha Deogracias is an aspiring accountant by day, freelance writer by night. Before writing for Gaming Trend, he had a small gig on the now defunct Examiner. When not being a third wheel with his best friends on dates or yearning for some closure on Pushing Daisies, he's busy catching up on shonen manga and wacky rhythm games. Mains R.O.B. in Smash. Still doesn't know if he's a kid or a squid.
Related Articles: Indies, Old School Musical
Share
Tweet
Share
Submit